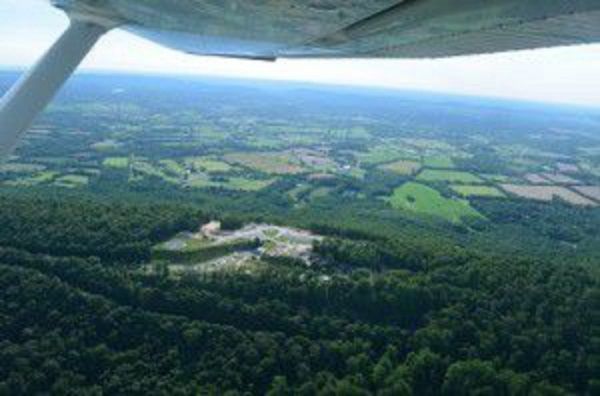 Aerial shot of AT&T facility at the top of Short Hill Mountain. 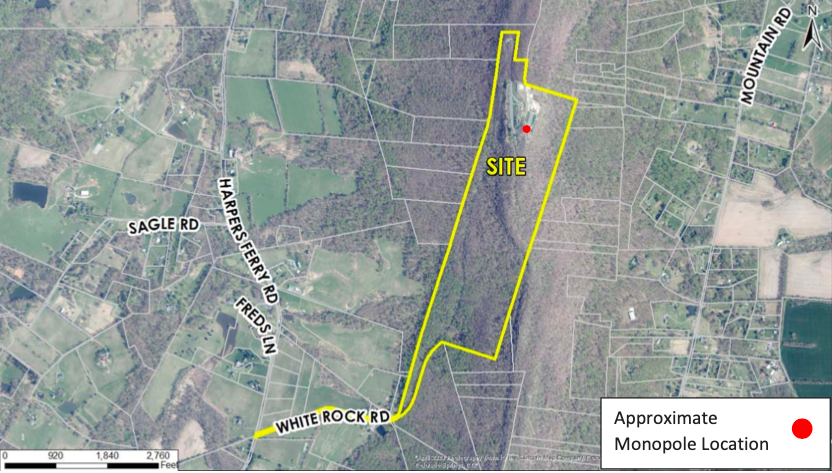 The subject property being considered for a 125-foot tall Monopole is located north of Charles Town Pike (Route 9) and west of Berlin Turnpike (Route 287).

Despite the Loudoun County Planning Commission’s recommendation to deny a proposed AT&T cell tower facility atop the Short Hill Mountain ridgeline, the Board of Supervisors will hold a public hearing on Sept. 14 to determine whether the proposal is consistent with the 2019 Comprehensive Plan.

On July 20, supervisors agreed to hold a hearing after they were unable to determine whether the Commission Permit should be granted or denied without a full opportunity to consider whether the application complies with the plan.

The board, with an 8-1 vote, overruled the Planning Commission’s denial of the application solely to enable the board to conduct a hearing, according to a July 20 staff report.

“There are really good arguments on both sides,” said Supervisor Caleb Kershner (R-Catoctin).

“I have not made a conclusion myself,” he said. “I fully want to hear what both sides have to say and I’m looking forward to the public hearing in September.”

In June 2020, AT&T Mid-Atlantic announced its plans to construct a 125-foot cell tower on Short Hill Mountain aimed at addressing the need for improved wireless coverage for residents, businesses and public safety members.

The subject property being considered for the monopole is located north of Charles Town Pike (Route 9) and west of Berlin Turnpike (Route 287). The AT&T-owned land will include a 50-foot-by-50-foot compound with a 125-foot-tall monopole surrounded by a 6-foot fence.

Supervisor Tony Buffington (R-Blue Ridge) opposed the motion out of disagreement with some of the language in the motion. He also pointed out the board’s efforts to include ridgeline protections in the comprehensive plan.

Chairwoman Phyllis Randall (At-Large) said the board’s action was not whether they agree or disagree with the commission, but instead fulfilling the application process.

AT&T’s application was submitted in conjunction with a special exception permit to allow a monopole in the Agricultural Rural-1 zoning district and a Minor Special Exception to modify Zoning Ordinance criteria to allow a Monopole on top of the Short Hill Mountain ridgeline.

The Planning Commission voted 6-3 to deny the Commission Permit application and forward the special exception request to the board for denial.

The proposed location of a monopole on top of the Short Hill Mountain ridgeline runs counter to the policies of the Loudoun County 2019 General Plan and Strategic Land Use Plan for Telecommunications Facilities that call for monopoles to be located on the downslope of the ridgeline, according to the commission’s list of findings for denial.

Additionally, the proposed monopole may have visual impact on the surrounding properties and views of the Short Hill Mountain which conflict with 2019 GP policies that call for the protection of the environmental and scenic qualities of the county’s prime viewsheds.

For more on this story, visit Loudountimes.com.The proposed monopole does not meet the Zoning Ordinance requirements for a Special Exception, the list stated.

The height of the monopole was reduced from a previous proposal of 155 feet to 125 feet in response to feedback from the neighboring community, company officials told the Times-Mirror last year.

AT&T representatives noted the new equipment would be smaller than the transmission dishes that were at the utility substation for more than 50 years.

The proposed site will have at least two co-location opportunities, allowing other wireless carriers to add coverage to the area.

The site, according to company officials, will also enhance voice and mobile broadband coverage for customers and prepare for emerging technology such as 5G, which is “significantly faster and more capable than today’s networks.”

AT&T’s Short Hill property has been the subject of heavy scrutiny and controversy in recent years.

In 2016, the company sought to build a 3.5-acre facility atop Short Hill Mountain. The 160,000-square-foot, above-ground facility was proposed to be constructed on top of AT&T’s already-existing underground facility.

For months the community pressed the county and AT&T for answers about the proposal, a project many speculated to be a data center or federal facility. The community pressure led AT&T to withdraw its application, and the Board of Supervisors voted to overturn the commission permit it sought on June 23, 2016.

“For more than three years, we’ve engaged government, community and business leaders on our plan to construct a site that will improve mobile broadband coverage for this community,” Garrett McGuire, regional director of external and legislative affairs, said in a prepared statement.

“Along the way, we adjusted our plan based upon the feedback we received from these leaders and other individuals,” he said. “We look forward to making our case for better mobile broadband coverage for first responders, local businesses, and area residents.”

Sen. John Bell (D-13th) expressed his support for the application in a July 27 letter to the board.

“The AT&T proposal on Short Hill is another important piece of our growing infrastructure in Western Loudoun County,” Bell said in an email to the Times-Mirror.

“This new tower is in the middle of a well-known gap in cellular coverage and would help Loudoun’s first responders, agri-businesses, and residents in getting stronger, more dependable coverage,” he said.

The public hearing was moved from Wednesday to Tuesday due to the observance of Yom Kippur.

Take Kersher's "both sides" comment as a vote for the tower. He's never yet voted against anything that had big money behind it, his claims of wanting to protect rural Loudoun notwithstanding. He campaigned on removing regs on any rural uses--which negatively impact rural residents.