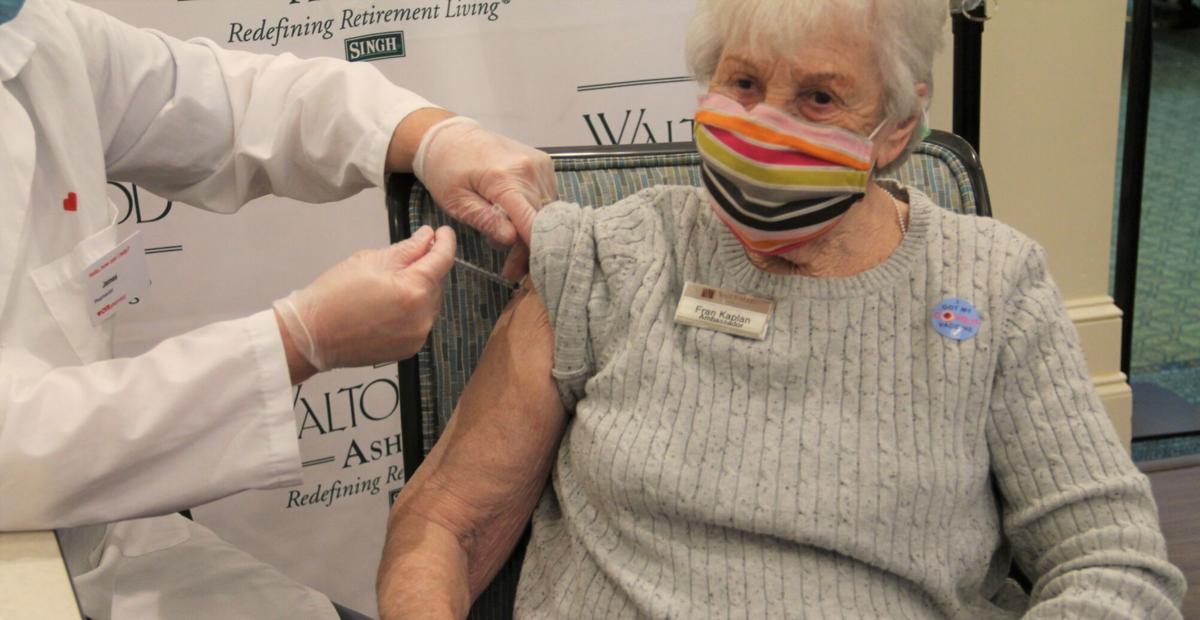 A resident of the Waltonwood Ashburn senior living home receives the first dose of the Pfizer vaccine on Jan. 15. 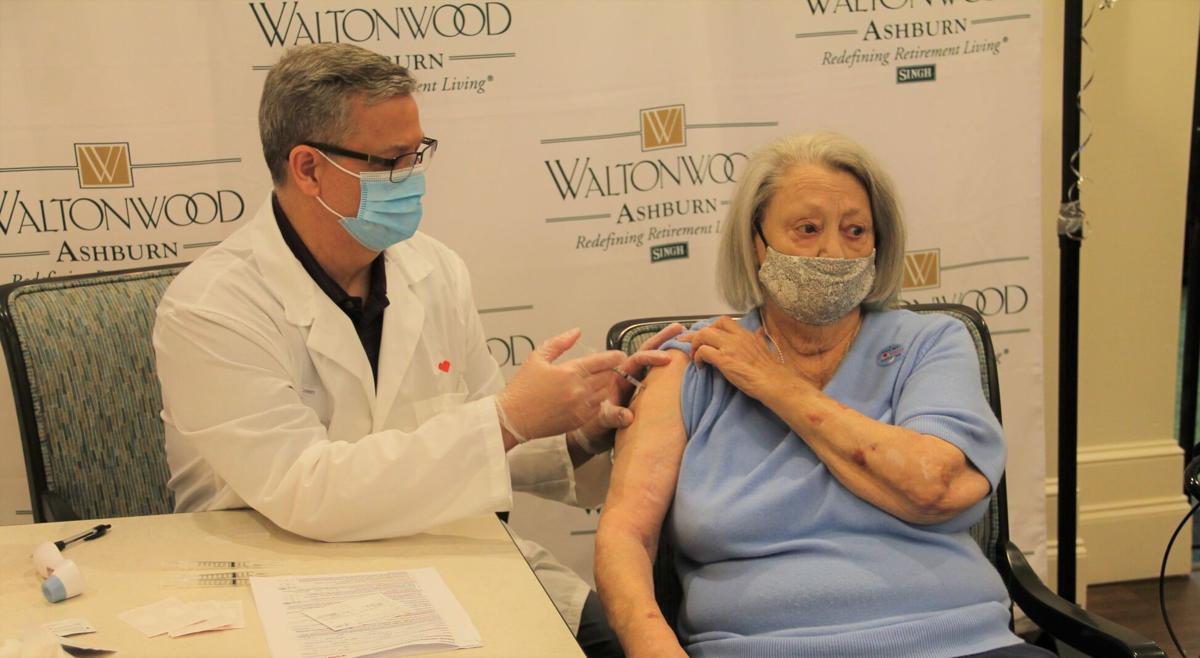 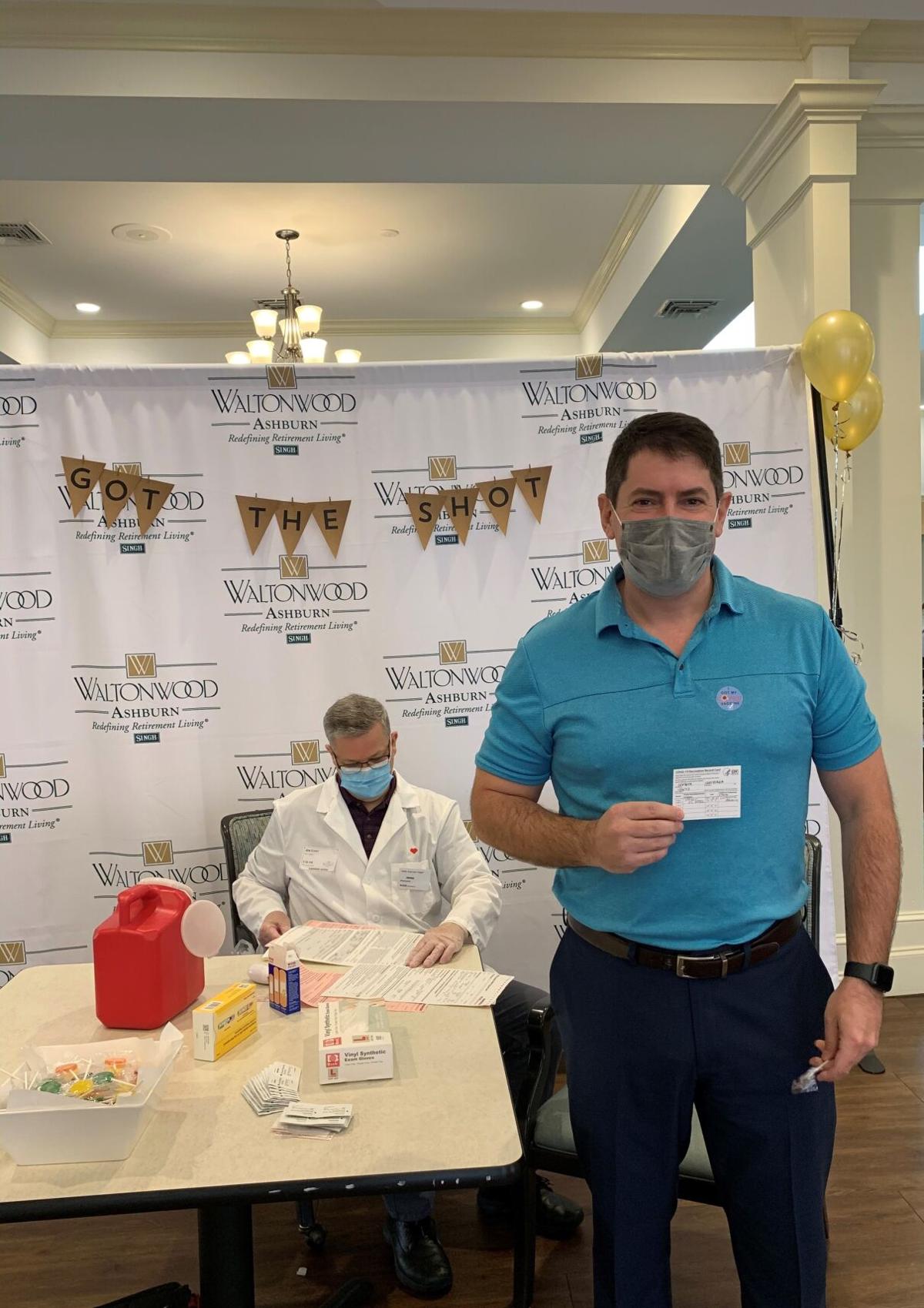 Waltonwood Ashburn Executive Director Chris Leinauer was the first to receive the Pfizer vaccine on Friday.

A resident of the Waltonwood Ashburn senior living home receives the first dose of the Pfizer vaccine on Jan. 15.

Waltonwood Ashburn Executive Director Chris Leinauer was the first to receive the Pfizer vaccine on Friday.

Nearly 250 residents and staff at Waltonwood, an independent, assisted living and memory care residence in Ashburn, received the first dose of the Pfizer COVID-19 vaccine on Friday.

Most residents breathed a sigh of relief that they were receiving the vaccine 10 months after the pandemic began last March.

Another resident, Joan Bock, was nervous, but excited. “I’m slightly nervous but thankful I’m getting it. I’m anxious to know if there are any side effects,” Bock said.

Waltonwood Executive Director Chris Leinauer said the vaccines were administered by representatives from CVS Pharmacy. After each person was vaccinated, they waited in a nearby room for 15 minutes for observation by a registered nurse.

“We are super excited to have them [CVS] here. They will come back in a few weeks to administer the second dose,” he said.

Since March, Waltonwood has had about 50 coronavirus cases among residents and staff, he said. He reports there have been five deaths among the residents.

“We test every week. Most cases were asymptomatic and they recovered. The more serious cases were among people who had underlying conditions,” Leinauer said.

Leinauer was the first person at Waltonwood to receive the vaccine on Friday.

“I want to lead by example. It is a sense of relief for our entire team who have been going through this. This is step one in the right direction to reopen our dining area to our residents,” he said.

Also in Ashburn, Tribute at One Loudoun, another assisted living and memory care facility, plans to vaccinate its staff and residents on Jan. 25.

Tribute at One Loudoun is partnering with CVS Pharmacy who will administer the Pfizer vaccine at the facility’s clinic.

“This is the first step toward getting back to normal and getting this pandemic behind us,” said Rob Leinbach, principal at Cadence, the parent company for Tribute One Loudoun. “We are grateful for our tremendous team at One Loudoun for their tireless efforts to protect our residents.”