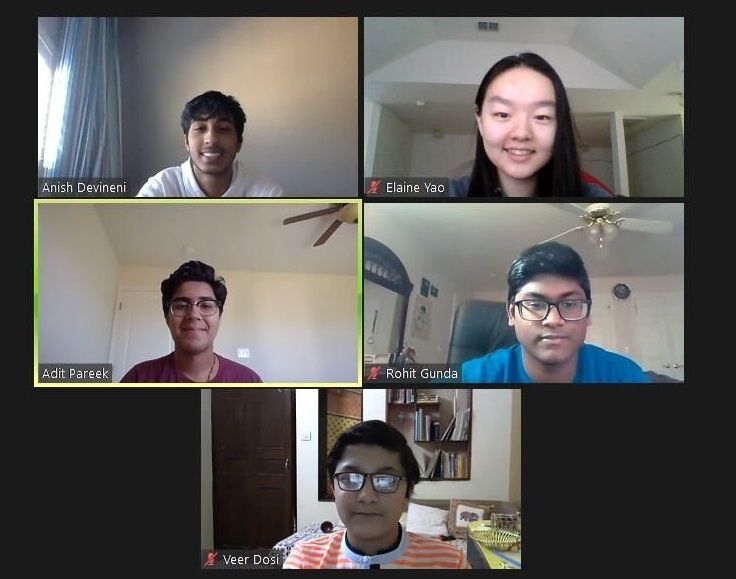 Pareek and his colleagues are hoping to release a beta version of edPAL by mid-December.

One does not have to be in school to know that the pivot to distance learning has been challenging on a number of levels.

But atop the lack of motivation and limited interaction with peers and teachers, Thomas Jefferson High School senior Adit Pareek considers technological frustrations among the most debilitating obstacles for students today — an obstacle for which he and a team of five others believe they’ve found a solution.

Pareek, of Ashburn, said the lack of centralization between several essential programs students and teachers have to use for virtual learning can cause ongoing stress for students simply trying to keep track of their assignments and important deadlines.

In response, Pareek and his team have developed edPAL, a web-based application that aims to aggregate data from several educational programs into one, easy-to-navigate platform.

“Think of it like a binder on the go,” he told the Times-Mirror.

At TJ, Pareek’s classes employ four or five different platforms, including Blackboard, Google Classroom, WebAssign and Flipgrid, and he said navigating these various applications can prove intimidating for pupils and teachers alike.

“There’s all these sorts of platforms that we’re using, and some teachers evidently aren’t organized, so it’s really difficult when students are put into that situation and don’t know what to do,” he said.

Such a situation has presented itself several times to Pareek, who a few weeks ago was unaware that he had a paper due for his government class.

“I didn’t even know about it since it wasn’t posted anywhere,” he recalled. “The only place it was was on Blackboard under, like, five different sub-folders. There was an announcement there saying there was this [assignment] due. There were no reminders or anything.”

When Pareek was selected to participate in the Gifted and Talented Silicon Valley Innovators (GATSVI) Venture Challenge, a startup incubator program, earlier this year, he found that all of his teammates — three of whom are from other parts of the U.S. and two of whom are from Asia — had encountered similar issues in their distance-learning environments.

Early in the development process, Pareek said he distributed a survey to other TJ students “just to see, do people really have these problems, or is it just me or a couple outliers?” The answer could not have been clearer.

“We got 350 responses, and out of those 350, 332 said that the online learning environment is frustrating since everything is on different platforms, and 326 of those 350 said that it’s really difficult to stay motivated and it’s easy to get distracted,” he said.

Pareek added, “We thought to ourselves, ‘There has to be some sort of solution.’ As students, we’re qualified to build it since we’ve gone through those problems ourselves.”

Along with joining different educational software into a single platform, he said edPAL aims to employ subversive tactics to motivate students to do their work, which has proven particularly difficult outside a traditional classroom setting.

Such strategies will potentially include flashy graphics when students submit assignments or even a rewards-based system, through which students could earn small prizes for doing well in school.

“Students will think that they’re working toward that goal — that goal can literally just be a coupon or something — but what they’re actually doing is training their brain to study better for a seemingly insignificant reward,” Pareek explained. “It becomes more about doing the work out of internal reasons, like enjoyment or interest.”

The rest of the edPAL team includes Anish Devineni from Texas, Veer Dosi from India, Rohit Gunda from Connecticut, Claire Shi from China and Elaine Yao from Texas. As part of the GATSVI program, they were required to pitch their idea to investors and venture capitalists and have so far received about $3,100 in seed funding as well as mentorship from tech executives.

While Pareek said that funding is “more than enough to get a basic application running,” the area in which edPAL needs the most support right now is community awareness and contribution. He hopes local and international students will specify which educational needs the app might be able to address.

“Our goal for edPAL really isn’t to profit off of students’ issues or create an education conglomerate. It’s really to address a lot of the students’ issues, especially during this environment, and with a platform that’s tailored to them,” he said. “We’ve really embraced that mission of ‘for students, by students.’ We’re really trying to address as much student feedback as possible.”

The edPAL team hopes to launch the beta version of the software by mid-December so students can start using it in the spring semester. After that, they’re hoping to get a mobile version off the ground.

“At the moment, it looks like we’re going to be back to [distance learning] for a good amount of time until we have a vaccine,” Pareek postulated. “It’s best to work toward at least making this a less glaring issue, making online learning a better experience overall.”