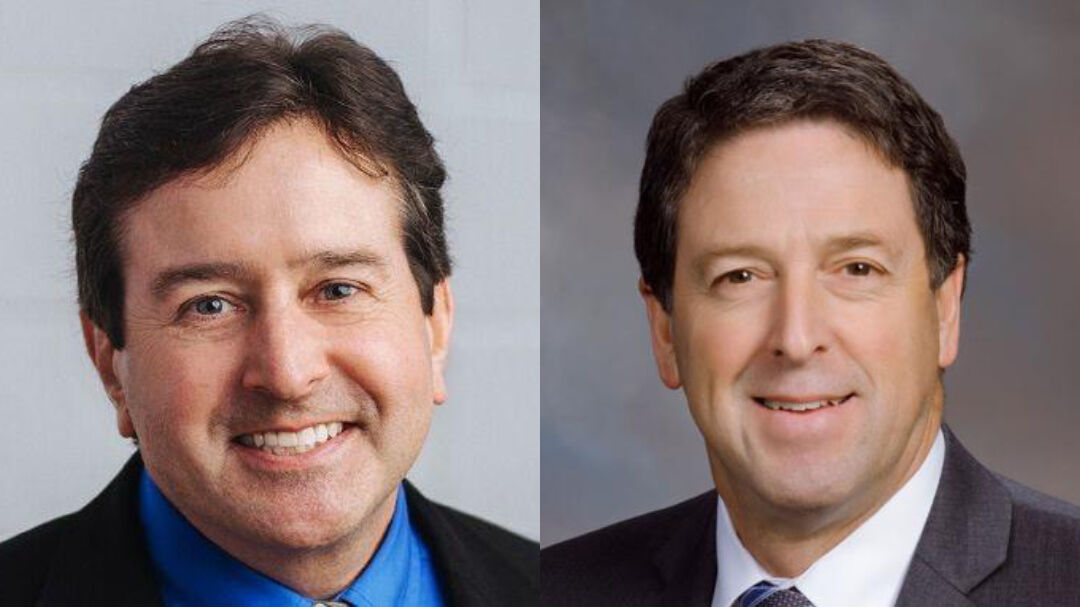 Paul Siker, the Democratic nominee for the House of Delegates District 33 seat, accused his opponent, Del. Dave LaRock, of seeking to divide the community and stoking fear with the release a recent campaign mailer.

An image of the envelope was shared online and included a message in the delivery address section stating “they’ll rip up your Bible … they’ll burn your flag … they’ll even turn your children and grandchildren against you.”

A recipient of the mailer, who asked that they not be identified, said the mailing address — cut out of the photo — was below the text. Additionally, the recipient shared with the Times-Mirror LaRock’s campaign documents included in the envelope and the full envelope cover.

LaRock, who is seeking a fifth term in the Virginia House of Delegates, did not respond to multiple requests for comment seeking verification that the materials were distributed by his campaign.

Siker said he believes the envelope was from his opponent’s campaign. He said after LaRock’s eight years in office, Siker said people need to make a decision fundamentally about whether he’s been an effective legislator and professional when representing the district.

“This is completely illustrative of exactly why I jumped into this race because Dave LaRock does not attempt to build a community, he works to divide a community and that’s not what we need,” Siker said.

“For me and the many people that I talked to, he hasn’t,” he said. “It reminds me of that old definition of ‘insanity,’ which is doing the same thing over and over again, and expecting different results. And I think that in the case of Dave LaRock, we’ve seen the playbook — we’ve seen it multiple times. It’s old, it’s stale and it’s time for a change.”

Objections from Board of Supervisors chair

Loudoun County Board of Supervisors Chairwoman Phyllis Randall (D-At Large) said she supports Siker in his campaign to ouster LaRock after a photo of her was used without her permission in one LaRock’s newsletters and advertisements.

LaRock said her remarks are “absurd” and shows the “length that she’s willing to go to try to discredit me after she’s praised me for being an effective legislator.”

He directed the Times-Mirror to a May 14 letter signed by Randall, in which LaRock said Randall was “praising my work” and “I hope to work with you in the future.”

LaRock was thanked for his support over a number of years, which ended with two bills focused on oversight of the Dulles Greenway passing during the 2021 General Assembly Special Session. Vice Chairman Koran Saines (D-Sterling) and Randall signed the letter, which stated the legislation will “improve the quality of life for commuters across our region” and that the board is “grateful for your efforts on behalf of Loudoun residents and look forward to working with you in the future.”

“Chair Randall is the one that’s lying there,” LaRock said.

“She’s pretending there’s no reason for me to use quotes that were sent to me in a letter on county letterhead, praising my work and saying, ‘I hope to work with you in the future,’” he said.

Randall said any policy issue is immaterial to the campaign literature issue and disagrees with LaRock’s assertion that she is lying.

She also added that her image has been used in LaRock’s mailings and social media advertisements without her permission.

“To be clear, I find LaRock to be dishonest, discredited, disingenuous, disgusting & really creepy,” Randall tweeted.

“I can’t stop him from using my picture & indicating I support him, but to be clear I support @PaulSiker,” she said in a post on Twitter.

Up there with the Attack of the Killer Tomatoes and Devil Fish is the latest addition the Evil Mailer, oh no Mr. Bill!

Dave Larock is indecent. This week he called his opponent's MINISTER to question his opponent's commitment to his faith. The minister set him straight. Virginia has had enough of Larock's inappropriate behaviors. Phyllis Randall saw Larock looking lost at the 4th of July parade and offered assistance. He told her, "I am going to change my clothes; want to help me with that?" He is disgusting. And that is before we start to talk about his behaviors at the insurrection and attempts to disenfranchise VA voters. He wrote an email to his entire neighborhood encouraging them to get their friends and families to target a family he was bullying in the neighborhood. this email was introduced into evidence at his recent trial for destruction of property. UTTERLY UNFIT TO SERVE.

Great job Loudoun Times. Nice work being a tool for a particular party during an election season.

The truth is Mr. Siker is running well behind in the polls. And it doesn’t appear that he has any coherent message for Loudoun County except it’s time for a change.

Actually, Delegate LaRock is the change. Under the leadership of democrats McAuliffe and Northam Virginia has tanked.

McAuliffe-Northam COVID policies have been a disaster with AARP earlier this year ranking Virginia as one of the most dangerous states in the nation for COVID while also having one of the strictest lockdown policies.

Following COVID, Virginia doesn’t even rank in the top 30 of states for our economy and labor market recovery according to the financial website WalletHub.

According to business.org, Virginia ranks LAST in the country when it comes to paying teachers.

This summer, BankRate scored Virginia as overall 31 of 50 states when it comes to choosing a place to retire. Significantly contributing to that score were our high property and sales tax rates and our access to health care and economic security.

On top of everything else, we’re more divided than ever with McAuliffe-Northam, supporting Critical Race Theory that believes people should be judged by the color of their skin and that the police are the source of our problems and should be defunded.

And regarding your complaint about the cover of an envelope, let me just say this,

Mr. Siker, we’re tired of elected officials trying to force us to abandon our religious, and for many of us, biblical values.

Last year, Governor Northam and the democrat controlled state congress tried to do just that with the “Virginia Values Act” that compels places of worship, religious schools, and faith ministries to hire employees that do not share their faith beliefs.

We’re tired of seeing our flag disgraced by athletes and burned by rioters time and time again.

The flag that embodies the “land of the free,” the best of what our nation represents, and the values for which men and women of all races and colors have died to defend.

We’re tired of elites attempting to control and “retrain” our children against the values we’ve brought them up with.

I’m sure you’re aware of our school board trying to retrain our white children to affirm their guilt and inborn racism and to train our children of color that they are oppressed and victims. Something you rallied behind in the form of support for Critical Race Theory in your letter to the editor earlier this summer.

Meanwhile, in the midst of all this debacle, democrat leaders in our county have praised Delegate LaRock for his ability to work with others and secure legislation that improves the quality of our life for us here in Loudoun.

We’ve had enough of McAuliffe-Northam. Let’s not make it McAuliffe-Biden. And let’s keep Delegate LaRock. He represents the change we need.