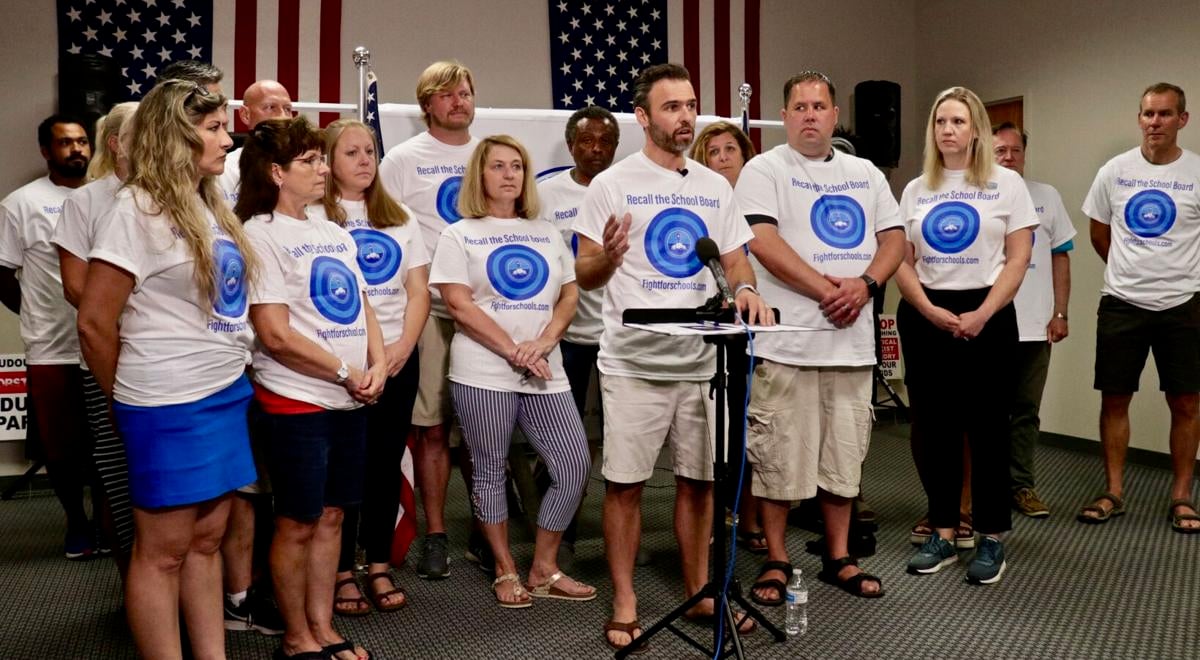 Fight for Schools executive director Ian Prior, center, conducts a press conference in Ashburn on June 21, the day before the final Loudoun County School Board meeting of the 2020-2021 academic year. 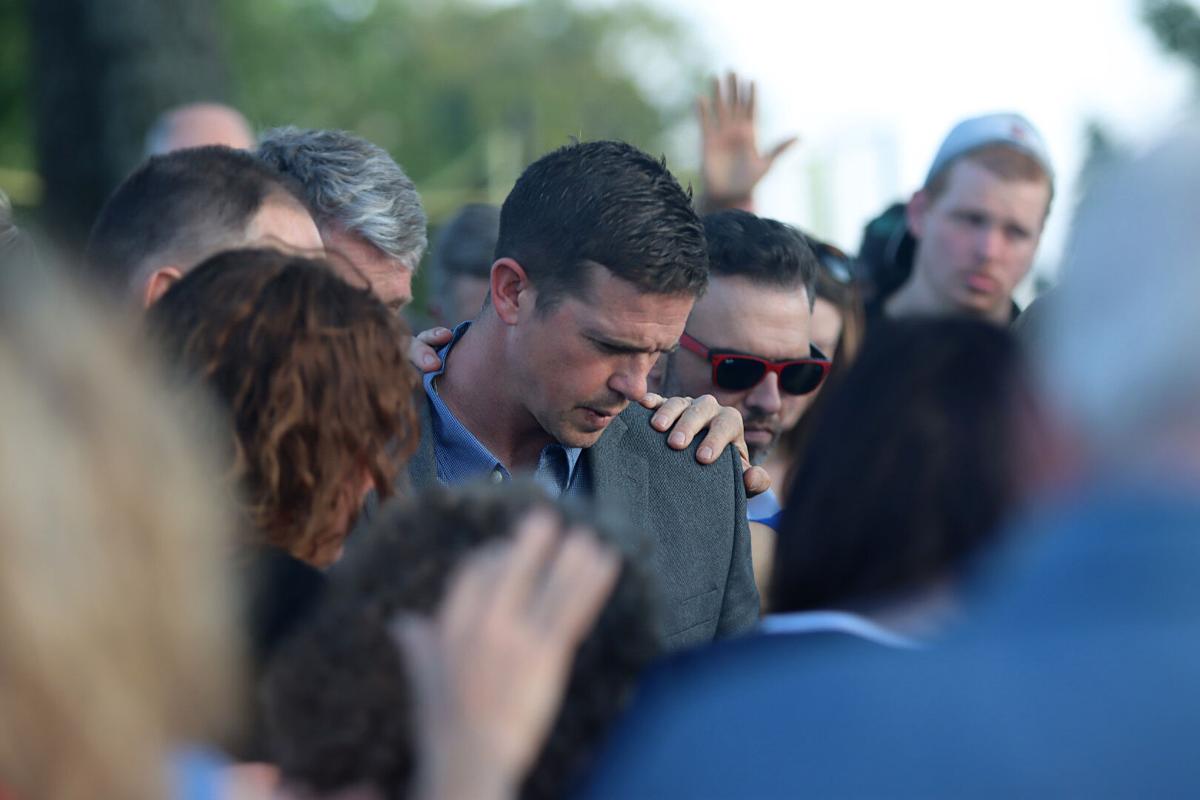 Leesburg Elementary School physical education teacher Byron “Tanner” Cross, who was recently placed on administrative leave, bows his head in prayer as supporters join him at a rally following a court hearing held to decide whether to impose an injunction reinstating him as a teacher.

Fight for Schools executive director Ian Prior, center, conducts a press conference in Ashburn on June 21, the day before the final Loudoun County School Board meeting of the 2020-2021 academic year.

Leesburg Elementary School physical education teacher Byron “Tanner” Cross, who was recently placed on administrative leave, bows his head in prayer as supporters join him at a rally following a court hearing held to decide whether to impose an injunction reinstating him as a teacher.

Parents, political groups and others in Loudoun County are gearing up for what will likely be a packed meeting of the Loudoun County School Board on Tuesday — its last until August.

Loudoun County Public Schools stakeholders plan to address the board on such controversial topics as the school system's alleged adoption of critical race theory, school policies regarding gender and other matters.

The two local organizations seemingly most engaged in these controversies are parent group Fight for Schools and the Loudoun County Democratic Committee.

Fight for Schools — which has continuously accused LCPS of "indoctrinating" students with ideas based in critical race theory — held a conference in Ashburn on Monday evening. Ian Prior, executive director of the group delivered remarks to the press and a number of attending supporters.

"This is about parents' movement to take back their schools and to get a seat at the table on how our public schools are run," Prior said.

Critical race theory is defined as the understanding that race is "socially constructed and socially significant," and that "racism is a normal feature of society and embedded within systems and institutions," according to the American Bar Association.

LCPS has repeatedly denied the allegations that it has adopted critical race theory. Those claims have not stopped the controversial theory from becoming a key buzzword in conservative rhetoric in Loudoun County.

The recall effort began in March after Fight for Schools found the six board members to have joined a private Facebook group called "Anti-Racist Parents of Loudoun County." A member of that group allegedly called for other members to "infiltrate" another anti-CRT parent group, Parents Against Critical Theory (P.A.C.T.), through potentially illicit means.

The Loudoun County Sheriff's Office launched an investigation into the allegations against the Facebook group in March, though no results have been made public.

Petitions to remove an official from elected office must be signed by a number of people from the official's jurisdiction equal to 10 percent of that office's voter count in the last election, according to the Code of Virginia. Once the required number of signatures are accrued, the petition is delivered to the local circuit court.

According to Prior, progress in the recall effort has been steady since Fight for Schools began collecting signatures six weeks ago. Prior said the most progress has been made against Barts, with 895 signatures collected as of Monday afternoon — 76 percent of the required number for a petition.

That group began in June 2020 to show support for LCPS in its decisions to maintain low-risk schooling procedures, such as prolonged distance learning, during the COVID-19 pandemic. However, Prior said board members' involvement in the group was a mark of impropriety and a violation policy.

LCPS Policy 1035, "School Board Norms, Protocols and Violations," which prohibits School Board members from gathering "in groups of more than two outside of a meeting and discuss public business." The Code of Virginia similarly notes that an "informal assemblage of … as many as three members" of an official body constitutes a meeting.

Prior shared screenshots with the Times-Mirror showing that more than two board members commented on certain posts in the "Safe Schooling" Facebook group, which Prior viewed as a policy violation. For example, a post from Oct. 28, 2020, received comments from Barts, Corbo, Morse and Reaser.

"What you see here is a pattern in practice by Loudoun County Public Schools of operating without transparency, without accountability, and they keep getting caught," Prior said.

On Tuesday, Barts told the Times-Mirror that she and other board members who commented on posts in the Facebook group were interacting directly with community members who wrote the posts, rather than with each other.

"We were responding to residents and we were not having a conversation amongst each other regarding school policy," she said.

"I think Ian Prior is reaching," Barts said. "I do not feel like … we violated any laws."

In an email to the Times-Mirror on Tuesday Corbo offered similar thoughts, saying, "My understanding is there can be replies to constituents on the same topic where the board is CC'ed and/or part of a group, however there has to be time between comments."

Sherdian, Reaser, Serotkin, Mahedavi and Morse did not respond to requests for comment prior to publication.

The Loudoun County Democratic Committee only recently entered the discourse surrounding LCPS when the committee commented on the controversy involving Byron "Tanner" Cross, a Leesburg Elementary School teacher who was placed on administrative leave after offering public comment at a School Board meeting on May 25.

Cross said that he would not recognize students' preferred gender pronouns or names if they choose to not identify with the gender they were assigned at birth. His comments were based on a draft policy that, if passed in its current form, would mandate such recognition by employees.

That document, draft Policy 8040, "Rights of Transgender and Gender-Expansive Students," will be discussed as part of the information agenda at Tuesday's School Board meeting. It was written in response to Virginia House Bill 145 and Senate Bill 161, two identical pieces of legislation.

HB 145 and SB 161 require school boards in the commonwealth to adopt policies regarding the treatment of transgender students in elementary and secondary schools. Policies are to be based on Virginia Department of Education model policies that were made available to local school boards last year.

Last week, the U.S. Education Department expanded its interpretation of federal sex protections to include transgender and gay students. The department said discrimination against students based on sexual orientation or gender identity will be treated as a Title IX violation, as reported by multiple news outlets.

LCPS placed Cross on leave two days after his comments, with administrators saying his conduct "had a disruptive impact on the operations of Leesburg Elementary School." Cross sought legal counsel and received a wave of support from the community, including Pastor Gary Hamrick of Leesburg's Cornerstone Chapel, of which Cross is a parishioner.

Hamrick announced during a May 30 sermon that Cornerstone would host the collection of recall signatures against the School Board, saying, "now it's personal." The LCDC responded critically with a press release on the same day, calling on Hamrick to "recant his allegations due to the libelous and inflammatory nature of the remarks."

On June 8, Loudoun County Circuit Court Judge Jim Plowman Jr. issued a temporary injunction reinstating Cross, following a three-hour hearing on June 4. LCPS said on June 11 that it would appeal Plowman's decision to the Supreme Court of Virginia, though the school system complied with Plowman's injunction and

Last week, the LCDC announced that it would hold a "Loudoun for All" rally outside the LCPS Administration Building in Ashburn before Tuesday's board meeting.

The LCDC website describes the event as intended "to show support for diversity & acceptance in Loudoun County Public Schools." Other community groups will participate in the rally, including Equality Loudoun, Equality Virginia and Loudoun PFLAG, all of which primarily serve the LGBTQ+ community.

"We want to show the School Board that we, as parents, neighbors and community members, appreciate that they are fulfilling the promises made when we elected them," Loudoun County Democratic Chair Lissa Savaglio said in a prepared statement. "Loudoun County must continue to strive for the acceptance and safety of all its children."

Several speakers will be present at the "Loudoun for All" rally, including transgender advocate Brynn Tannehill. The LCDC will also provide bus transportation to the rally for those in need.

Tuesday's Loudoun County School Board meeting will begin at 4 p.m. As of late Tuesday morning, more than 220 people have signed up to participate in public comment both in person and virtually — just shy of the 230-person limit — according to LCPS Public Information Officer Wayde Byard.