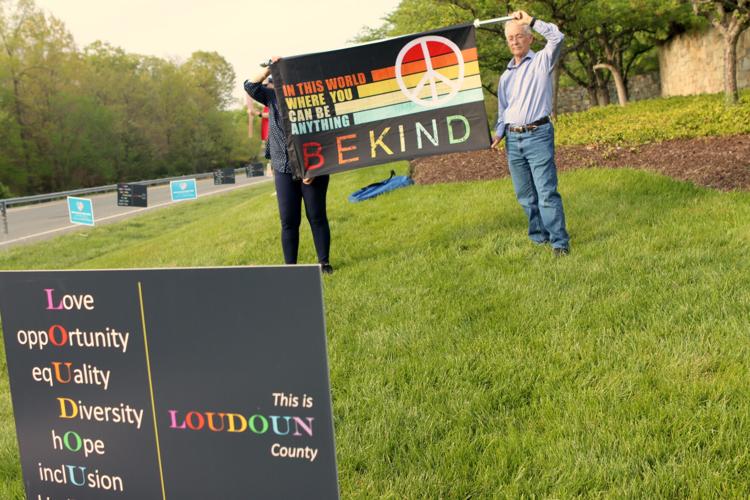 Protestors hold up a “Be Kind” sign in Leesburg on May 3. 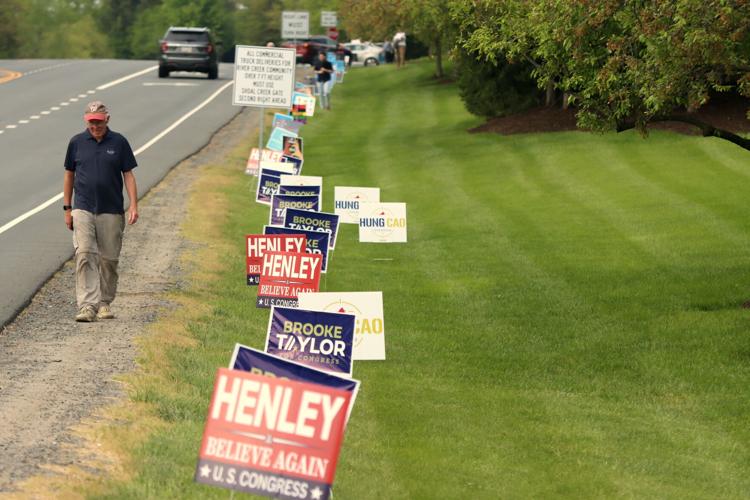 A mix of signs for congressional candidates and those calling for “equality” and “peace” led drivers on May 3 into a gated community on River Creek Parkway in Leesburg. 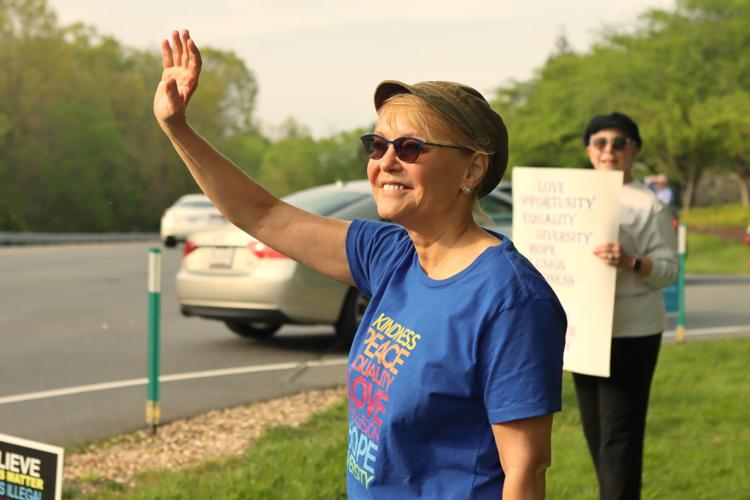 Loudoun County resident Tammy Cummins, wearing a T-shirt urging for peace, waves to drivers entering into the River Creek on the Potomac community on May 3. 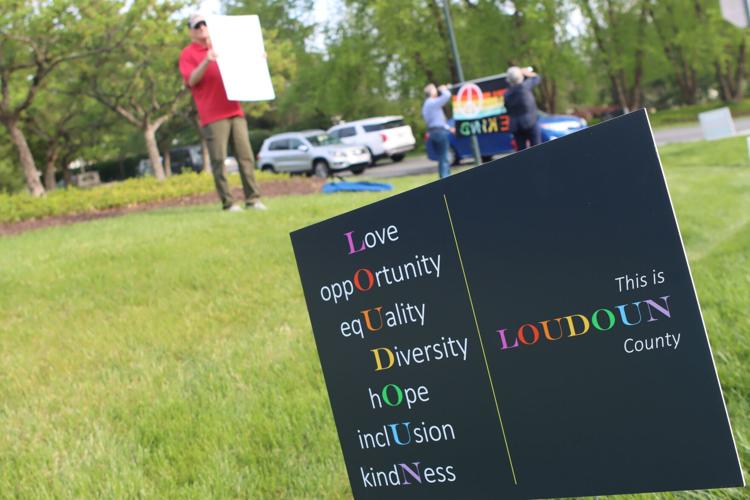 A mix of signs calling for “equality” and “peace” led drivers on May 3 into a gated community on River Creek Parkway in Leesburg.

Protestors hold up a “Be Kind” sign in Leesburg on May 3.

A mix of signs for congressional candidates and those calling for “equality” and “peace” led drivers on May 3 into a gated community on River Creek Parkway in Leesburg.

Loudoun County resident Tammy Cummins, wearing a T-shirt urging for peace, waves to drivers entering into the River Creek on the Potomac community on May 3.

A mix of signs calling for “equality” and “peace” led drivers on May 3 into a gated community on River Creek Parkway in Leesburg.

This story was updated to include remarks from Prior that the political video had nothing to do with hate speech, but on election integrity, which he did not speak on. The video was also not flagged for “incendiary hate speech."

As recently formed groups continue to challenge and call for accountability from Loudoun County Public Schools, they were met on Tuesday ahead of speaking event by more than a dozen protesters who said that the groups do not share the same ideas.

On Tuesday, the Army of Parents and Moms for Liberty Loudoun County Chapter hosted “American Matters,” the first in a speaker series of conversations about matters that are “important to Americans” at the country club at River Creek on the Potomac, according to the event flyer.

Organizers of the protest took issue with the groups’ previous messages and gathered outside of the entrance to the gated community.

“No, this is not the voice of Loudoun County,” said Katie Smith, who was protesting.

Another protestor said “weaponizing religion to create hate is inhumane.”

Elicia Brand, co-founder and president Army of Parents, and Cheryl Onderchain, chair of the Moms for Liberty Loudoun County Chapter, were perplexed why there was a protest.

“We want to create the opportunity to achieve the ‘American Dream’ for all children of all races, all religions, all ethnicities. That’s what we really want to do and we’re going to do that any way that we can with any people who want to do that for our children. And right now, it happens to be more so the moderate Democrats and the Conservatives,” Brand said.

Onderchain said the focus was to showcase some of the candidates and prepare voters for the 10th Congressional District Republican primary on May 21.

“I was a little surprised that anybody would be protesting our rights to educate voters,” Onderchain said.

She further stated “Absolutely, I support every [person’s] right to show up and exercise their First Amendment right. I’m still scratching my head a little bit. I don’t understand why they would be protesting [against] us being involved in the democratic process.”

The sold-out event was focused on the topics of energy, immigration, foreign policy, federal government and the economy and featured WMAL Host Larry O’Connor, Daily Wire Journalist Luke Rosiak and some of the Republican candidates for the 10th Congressional District race.

Organizers placed more than a dozen signs promoting “equality” and “peace,” along the River Creek Parkway on both sides of the entrance to the gated community. While out with protestors, Leesburg Vice Mayor Fernando “Marty” Martinez, who is running for the House of Representatives, said he supports unity in spite of the different political views.

Brand, who is a member of the equity committee with LCPS, said “I love their messaging,” but believes the speaking event was the wrong event to protest. She said she welcomes the opportunity to meet with the organizers.

Organizers of the protest also expressed frustration with the event, specifically saying Fight for Schools Executive Director Ian Prior has been promoting “fear” and “intimidation” in Loudoun County. One organizer pointed out that a political video, which included Prior, was censored by YouTube.

Prior said in April 8 statement he urged parents to attend school board meetings to fight for their freedom of speech and speak against the “woke” educational system. He said the video had nothing to with hate speech, but on election integrity, which he did not speak on.

“Our main objective in protesting this event is to illustrate that Fight for Schools and its subsidiaries do not represent the majority views in Loudoun County,” said Tammy Cummins, a community resident, in a prepared statement.

“We also wish to raise awareness of the false representation that Fight for Schools is a non-partisan parents’ advocacy group,” she said. “Fight for Schools’ promotion and participation in the ‘American Matters’ event, which is comprised of ‘ultra-conservative’ Republican 10th Congressional District Candidates and media personalities, is a stark illustration of their true political alliances and aspirations.”

Although Fight for Schools was not advertised as a host of the event, organizers of the protest said the group shares connections to Army of Parents. Brand, who is the co-founder and president, previously testified for Fight for Schools in a recall case against a former Loudoun County School Board member.

“It’s a bit confusing why people would protest a forum where five candidates running for Congress were debating relevant federal issues before Republican primary voters,” Prior said.

“Are Republican candidates not allowed to have candidate forums and debates? Are the protesters against the First Amendment and an informed electorate,” he said. “Further, while I’d love to be able to take credit for such a well-executed event, I’m amused by people who bemoan ‘false representations,’ then in the same breath falsely represent that this was a Fight for Schools event.”

In the past two years, parents have challenged LCPS over a number of issues including public safety after two teens were assaulted in 2021.

Additionally, parents have challenged LCPS over school closures during the pandemic, mask and vaccination mandates, the use of controversial books.

LCPS has also been questioned on whether it has adopted critical race theory (CRT) in its curriculum, which it has denied, and policies, specifically to address the treatment and common issues pertaining to transgender students in elementary and secondary schools.

This crowd outside is part of the Black Lives Matter nonsense instead of the crowd that was inside like Jeanine Lawson who proclaims all lives matter including babies not yet born!

12 woke whiners show up accusing anyone who doesn't agree with them as "mean" and "inhumane" haters. YAWN. This is what is known in journalism circles as "dog bites man", not news. How do 12 protesters merit an article? LOL.

A dress code was in effect for this event and oh my there was many beautiful women in attendance. Mentioning that so you realize the contrast with those at the entrance, the men were dapper except for the LCRC chair who ignored the code, no respect for the hosts!

Infotainment at its best. Splendid event even with attention seekers at the entrance. Ian Prior has never been paid for his work; all the volunteers are just that. A noble group that does not advocate for candidates in political races.