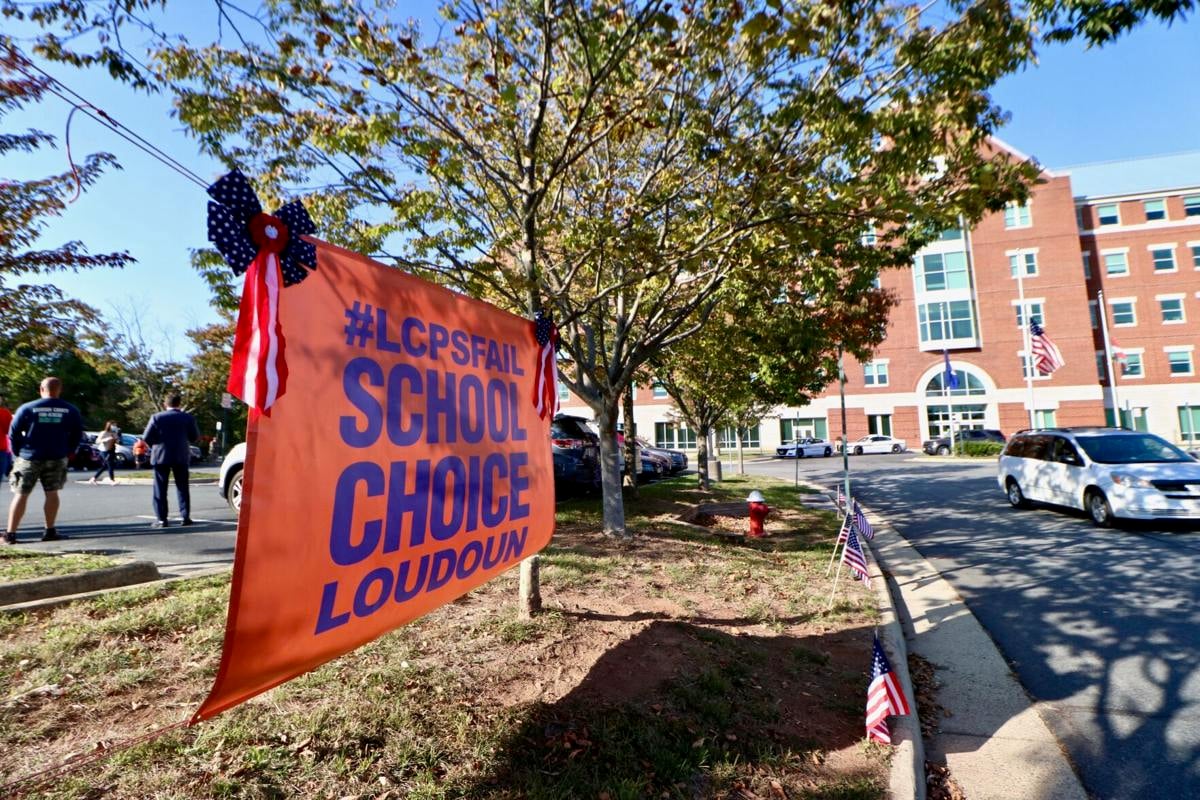 Dozens of car alarms blared outside the Loudoun County Public Schools administration building Sept. 22 as part of a "Honk for Back-to-School" rally. 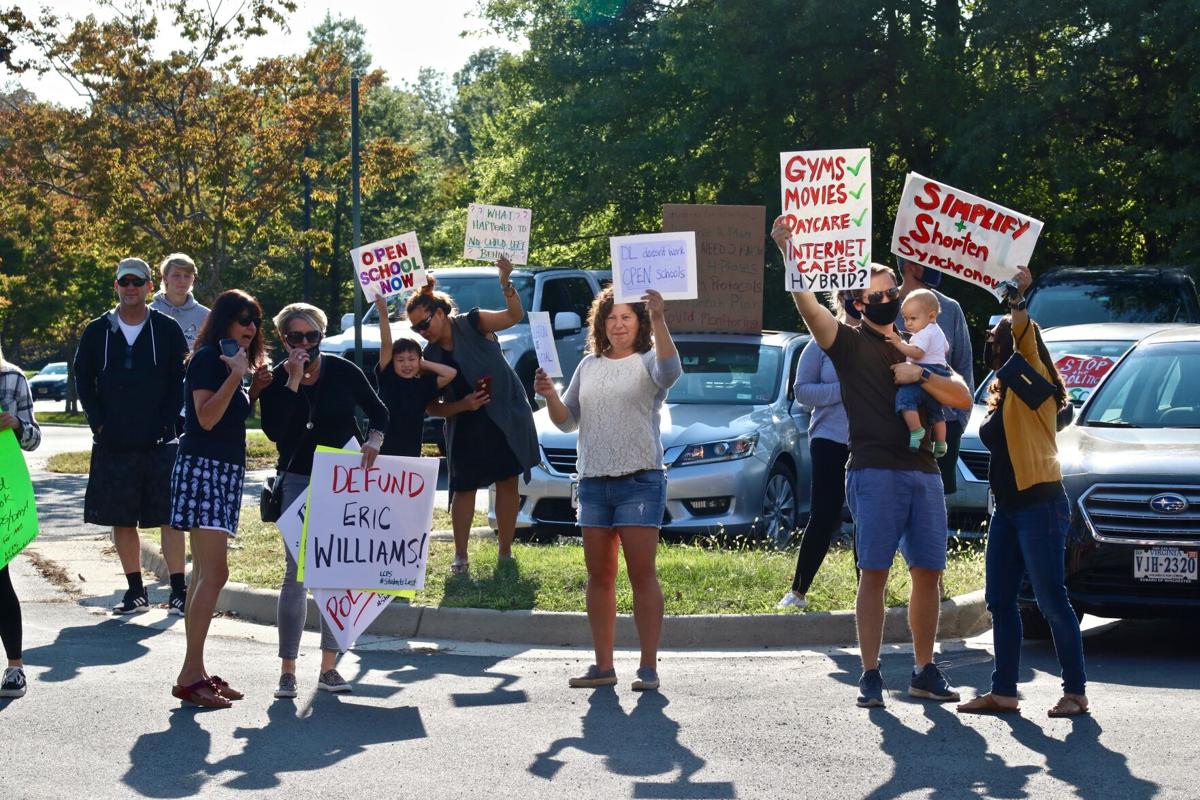 Protesters left their car alarms sounding as they hoisted signs criticizing LCPS’s strategies regarding the impending return to distance learning. 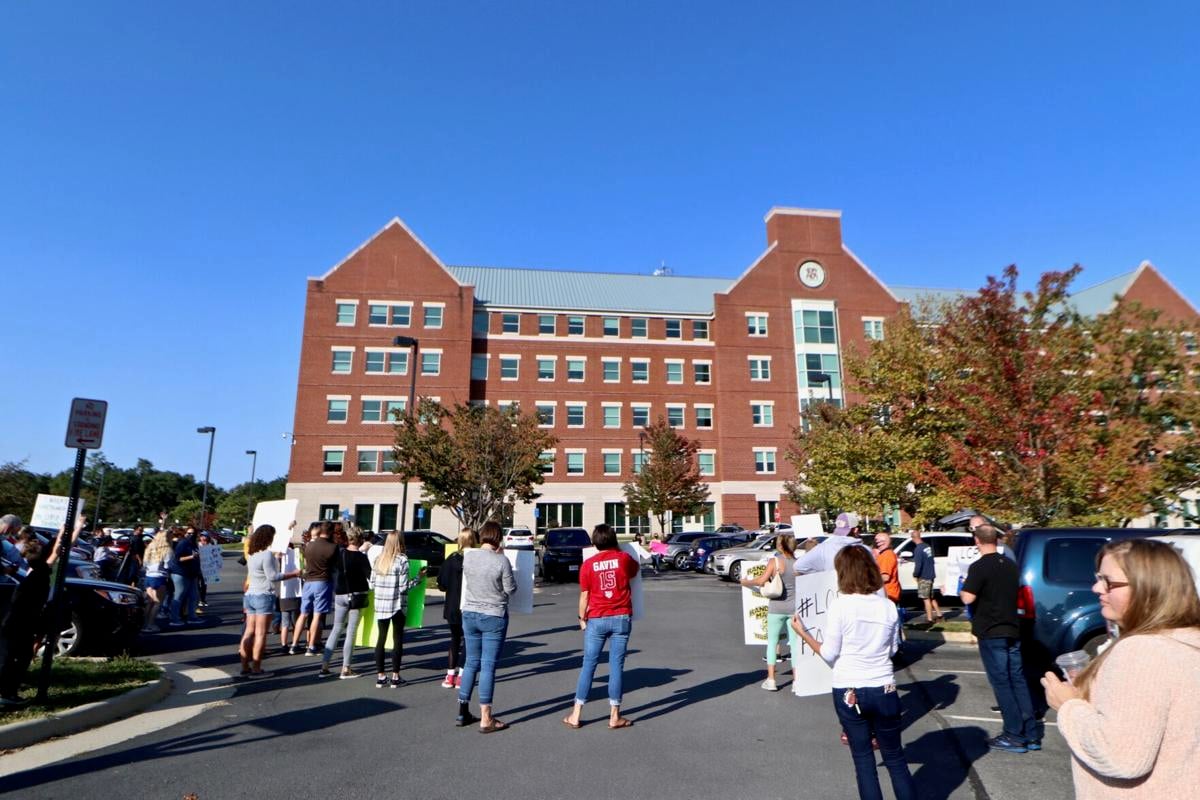 Tuesday's event was timed to coincide with the Loudoun County School Board meeting, and horns continued to sound outside the board room for roughly the first half-hour of the meeting.

Dozens of car alarms blared outside the Loudoun County Public Schools administration building Sept. 22 as part of a "Honk for Back-to-School" rally.

Protesters left their car alarms sounding as they hoisted signs criticizing LCPS’s strategies regarding the impending return to distance learning.

Tuesday's event was timed to coincide with the Loudoun County School Board meeting, and horns continued to sound outside the board room for roughly the first half-hour of the meeting.

Dozens of cars blared their alarms for nearly an hour outside the Loudoun County Public Schools administration building Tuesday afternoon as part of a “Honk for Back-to-School” protest demanding immediate, more specific plans for returning students to in-person learning.

“We collectively thought that enough is enough and we wanted to do something different,” Jonathan Buckley, one of the event’s organizers, told the Times-Mirror. “We thought that grabbing their attention with our cars and using our sirens would let them know that we are there, and we need to be heard as well.”

The event, which commenced at 4:30 p.m. in order to precede the 5 p.m. Loudoun County School Board meeting, involved members of the private Facebook group “LCPS Can Do Better” and was branded with the hashtag #LCPSfail.

After setting off their car alarms, protesting parents, students and LCPS community members filled the parking lot on foot, many hoisting signs emblazoned with phrases such as “Defund Eric Williams” and “No taxation without 100% education.”

A Loudoun County Sheriff’s Office deputy attempted to quell the noise after a member of a nearby neighborhood filed a complaint, but was unable to do so given the large number of participants.

Buckley said those disapproving of LCPS’s plans and actions thus far represent “the majority of people in Loudoun County,” citing conversations he claims to have held in which parents have told of their children’s “meltdowns.”

“We’ve lowered the bar so much that we consider a successful learning day being able to keep our 5-year-olds in front of a screen for three hours, and not the fact that they’re actually learning anything,” he said.

Though he acknowledged LCPS Superintendent Eric Williams was scheduled to present information regarding “Stage 2” of hybrid in-person learning during Tuesday’s meeting, he and others in the group find the details of that potential next step — which could involve sending students in grades K-2 back to the classroom part-time as soon as Oct. 27 — unsatisfactory.

“We definitely have to layer an approach. I think they started in the right direction with kids with IEPs and English-learning children in a test environment right now, but it’s too slow,” he said. “We think all elementary school-aged children should be introduced back into school, and not a layered approach where K-2 and 3-5 [begin hybrid learning] at different times. … We don’t want to wait until the end of October for elementary kids to go back to school. We want a plan in place in weeks.”

While Buckley considers himself “lucky” that he and his wife — both of whom are essential workers who do not work from home — have access to a daycare that oversees his 5-year-old’s and 8-year-old’s distance-learning efforts, he said many parents are not so fortunate and are struggling to help their kids engage in virtual learning eight hours a day.

One of those parents is Valerie Brodie, another participant who helped Buckley publicize the rally. She has children enrolled in fourth grade, second grade and kindergarten at LCPS, as well as a 7-month-old.

“I had two [kids] enrolled in the spring, and we had one go to a pretty dark place,” she recalled. “It was scary and sad and heartbreaking and stressful, so I prepped for this next season with new eyes, if you will.”

After the current academic year got off to a rough start for her kids, Brodie said she intervened and limited the amount of time they would spend in front of a screen, and she plans to address “whatever math and book-reading they’re missing on our own schedule.”

“I’ve reached out to our teachers and principal, and they’ve been really understanding and supportive,” she said. “I know there are some families that are trying to do everything by the book and what’s being asked of them, and it’s heartbreaking how much hurt it’s putting on their families.”

Brodie hopes Tuesday’s rally will push LCPS administrators to formulate a more immediate, comprehensive plan, a demand which she believes is “not controversial.” A number of participants in the rally echoed her sentiments during the public comment portion of Tuesday’s School Board meeting.

“That doesn’t matter where you fall on the spectrum — if you feel like we should be at school full time or you want to be distance-learning for the next two years,” she said. “There needs to be a plan. Hopefully the School Board and superintendent feel that heat and pressure.”

Muffled car alarms continued to sound outside until roughly half an hour into the evening’s agenda.