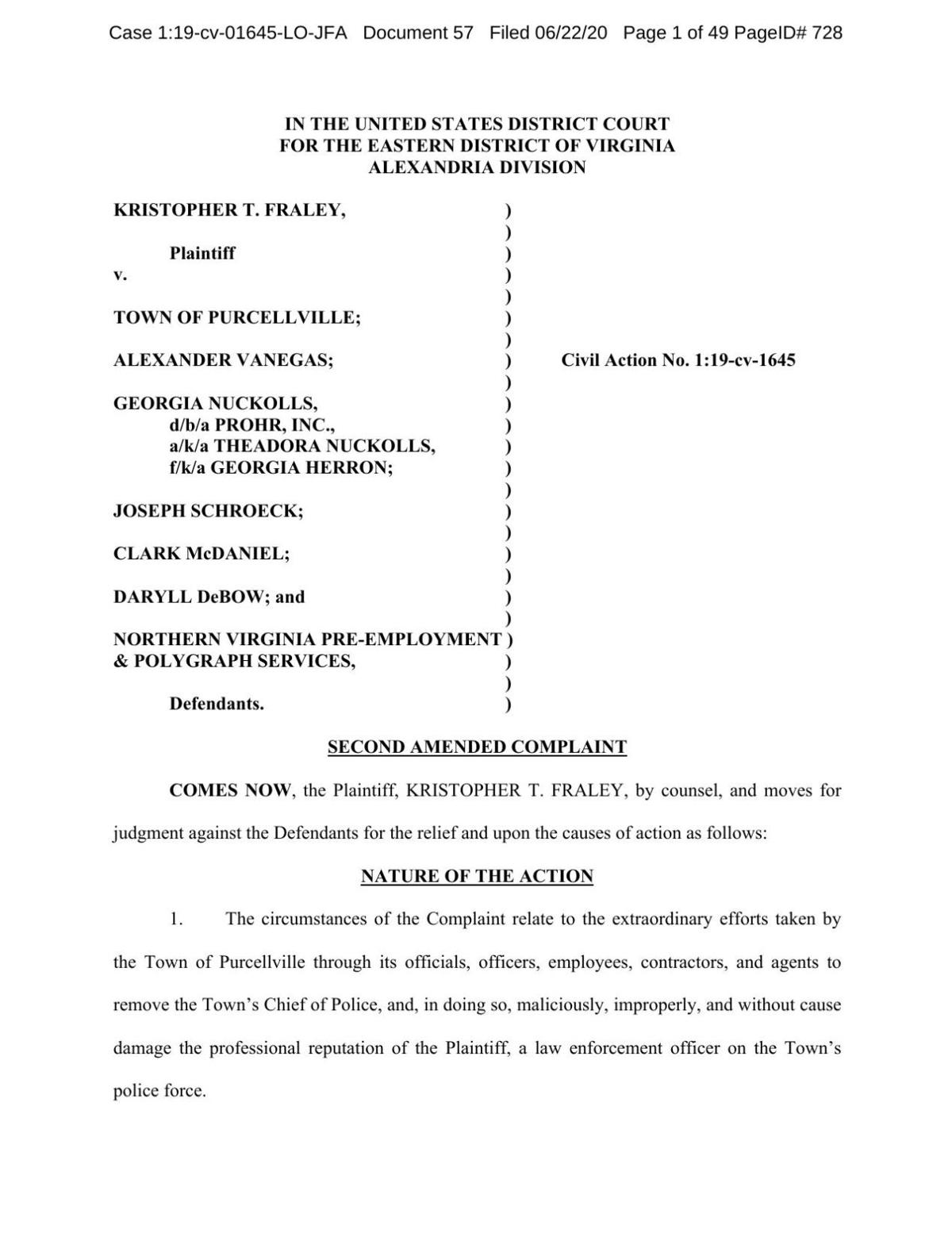 After a judge dismissed former Purcellville Police Officer Kristopher Fraley’s multimillion-dollar lawsuit against the Town of Purcellville last month, Fraley has refiled his complaint with the U.S. Eastern District Court of Virginia. He is seeking nearly $12 million in damages.

In May, the court found that all of Fraley’s 13 counts were without merit and failed to state any claims under Virginia or federal law.

According to town officials, the town and other defendants moved to dismiss all of the claims as unfounded and improper.

Fraley originally filed a $9.1 million lawsuit on Sept. 19, 2019, in Loudoun County Circuit Court. The case was later moved to U.S. Eastern District Court of Virginia at the request of both parties, and Fraley refiled his case adding several counts to the lawsuit seeking a total of $17 million.

Fraley, who had 30 days to refile his claim, did not wish to comment on the refiling.

Purcellville Town Manager David Mekarski told the Times-Mirror he respects the right of any employee to exercise their rights to try to resolve any disagreement or dispute that they have.

“I know the character of Kris Fraley, and I believe Kris would respect my obligation and the town’s obligation to dispute these allegations. Both parties will continue to process this through the legal venue of the courts and will obviously respect the final action of the judge,” Mekarski said.

For the remaining nine counts, Fraley seeks $1 million in compensatory damages and $350,000 in punitive damages for all but one count.

Fraley was placed on leave in October 2017 and reinstated Aug. 1, 2018, at the conclusion of the investigation in question. He reportedly attempted to expose rumors being spread about Purcellville Police Chief Cynthia McAlister by Purcellville officers.

Fraley’s filing outlines a series of alleged actions taken by the co-defendants to “maliciously, improperly and without cause” damage the reputation of Fraley during the purported scheme.

Fraley has since left his position with the Purcellville Police Department to pursue other opportunities.

In January, a $16 million lawsuit filed by Purcellville Police Chief Cynthia McAlister against the Town of Purcellville was settled out of court, according to McAlister’s attorney, Jacqueline Kramer of Westlake Legal Group in Sterling.

Another town employee who had threatened a lawsuit as a result of the McAlister investigation has also settled with the town, according to Mekarski.

Fortunately I don't live within the town limits,so who sues whom is none of my concern.I do wonder what amerigirl has to say about all this.She/ he has been noticeably absent from every single thread lately.

The circus continues in Purcellville and yet the residents reelected the same Mayor and Town Council. The residents are either dumb or don't care their town keeps spending their dollars and lawsuits.

As I recall, Lawman was bragging about Purcellville re-electing him. Reminds me of when DC re-elected the convicted drug felon Marion Barry. The only that matters to so many now is race. Any endorsement by Randall requires black skin regardless of competence.

once the lawyers saw who got elected....bam, easy pickings for them....

Exactly correct. I have met the officer and absolutely he is looking for an easy payday. I would suggest not settling.

wow is he looking for a huge windfall of easy free money or what?

This...and all the other stuff... make Purcellville look like a full fledged circus. And this is just the stuff we know about. These small enclaves tend to suffer from things like this. Haymarket had about a half dozen police officers about ten years ago and at one point only one of them wasn't facing some sort of criminal charge. Their governing council had some issues as well.

I don't blame Fraley for his persistence given what a circus the Town was in 2017. But Fraley was reinstated after 10 months in August 2018. Assuming he got back pay and benefits, not sure there's much for him to gain. Congrats go out to the Town citizens who just re-elected the same Mayor who was in charge of the Town during the fiasco (sarcasm if you couldn't tell).

It appears that Mel Williams Law is representing Fraley in this case (1:19-CV-1645) which, to my knowledge, is not associated with the Westlake Legal Group of Kramer and Plofchan.

And it appears to me (I could be wrong), that the refiled complaint was made on Jun 22, 2020 or 31 days after the order of May 22, 2020. It appears they may not have even met the filing deadline. But it could have been an issue with the datestamp.

LOL, They just re-elected the guy a the helm of all of this. People get the Government they deserve.

Is this the same Jacqueline Kramer who filed a knowingly false pleading denying her boss, Thomas Plofchan Jr., was sanctioned by the Seventh District Committee of the Virginia State Bar in March 2004 for violating the Rules of Professional Conduct? Kramer signed an interrogatory response saying her boss did not have to even acknowledge he was reprimanded because it was "immaterial" to a case on whether he was ..... reprimanded by the Virginia State Bar. And Plofchan dodged a deposition in which he was going to be asked under oath .... "were you sanctioned in March 2004" by the Virginia State Bar? Multiple motions for snactions against both of them in Loudoun court now. I think Plofchan has been previously sanctioned by every court with jurisdiction over Loudoun.

These lawyers are some of the most dishonest, incompetent scoundrels you will find walking this Earth. Both Kramer and Plofchan should be kicked out of the Bar right now. Frivolous lawsuits. Completely unethical.

In my opinion, there is no need to be so drastic and unproductive as eliminating the Town government. We would then be saddled with something far worse, an HOA on steroids. However, the fact the population, or more factually a percentage of the population that actually votes in local elections, keeps re-electing officials that have exposed the municipality to multiple liabilities is sad. As a bedroom community now, I realize most in town are "too busy" to worry about local politics. If these strange times have taught us anything is that no politics are unimportant. We need intelligent, respectful, responsible, and dedicated leaders. Not people hoping to play a real-life game of " Sim City." [wink]

Unfortunately, Purcellville will never be geographically large enough to cultivate a population level that provides a pool of intelligent, respectful, responsible, and dedicated individuals who can devote their time to local government. That's why they, and other small towns, would be better dissolving and entering into binding agreements with the county to continue the cultural aspects of the town without burdening their residents with duplicative (and poorly managed) government.

Just another productive day in the purcellville government....and they re-elected the entire crew that created all of this...you get what you vote for.....

Residents need to vote in council members who are willing to abolish the town.

Actually, when it comes to government, you actually never really get what you pay for.