$4.99 for 7 days
Get Started
You are the owner of this article.
Edit Article Add New Article
You have permission to edit this article.
Edit
Home
News
Opinion
Sports
Business
Entertainment
Best of Loudoun
ePages
Special Sections
Obituaries
Classifieds

While Warner held office as a Republican from 1979-2009, he's been fickle with his endorsements over the years. In this year's U.S. Senate race in Virginia, he's supporting incumbent Democrat Tim Kaine over challenger Corey Stewart.

“As the only female member of the Virginia congressional delegation, Barbara has taken on an important leadership role for women,” Warner, along with former Congressmen Frank Wolf and Tom Davis, said in an endorsement letter. “Barbara led the charge on cracking down on sexual harassment in Congress and the workplace, passing major reform legislation to require mandatory training for all staff and Members of Congress to prevent harassment, as well as legislation to reform the process by providing a victims advocate office and demanding more accountability and transparency.”

With one month until Election Day in Virginia's 10th District, Comstock is trailing in the polls in her re-election fight against state Sen. Jennifer Wexton (D). A recent Monmouth poll listed Wexton ahead by 7 points, while the most recent Washington Post poll showed Comstock trailing by 12 points.

The trio of former Republican lawmakers praised Comstock for her work in advocating for women and girls.

“Barbara has also been a leader promoting women in the STEM fields with the passage of her INSPIRE Act and other STEM education efforts, and she established the 10th District Young Women’s Leadership Program that has mentored over 1,500 young women in high school and junior high school,” the endorsement letter states. “ … It is important that the region continue to have bipartisan leadership in Congress because one-party domination in our region would ill serve many of our constituencies that need both parties fighting for their interests.”

Comstock has campaigned on her support for women, vote in favor of the Trump administration's tax cuts and increased Metro funding, among other initiatives.

Wexton is calling for stricter gun control – pointing out Comstock's “A” rating from the NRA in the process – and she has railed against the Trump administrations' economic plan and treatment of women. Wexton has been endorsed by the commonwealth's statewide officer-holders – all Democrats. 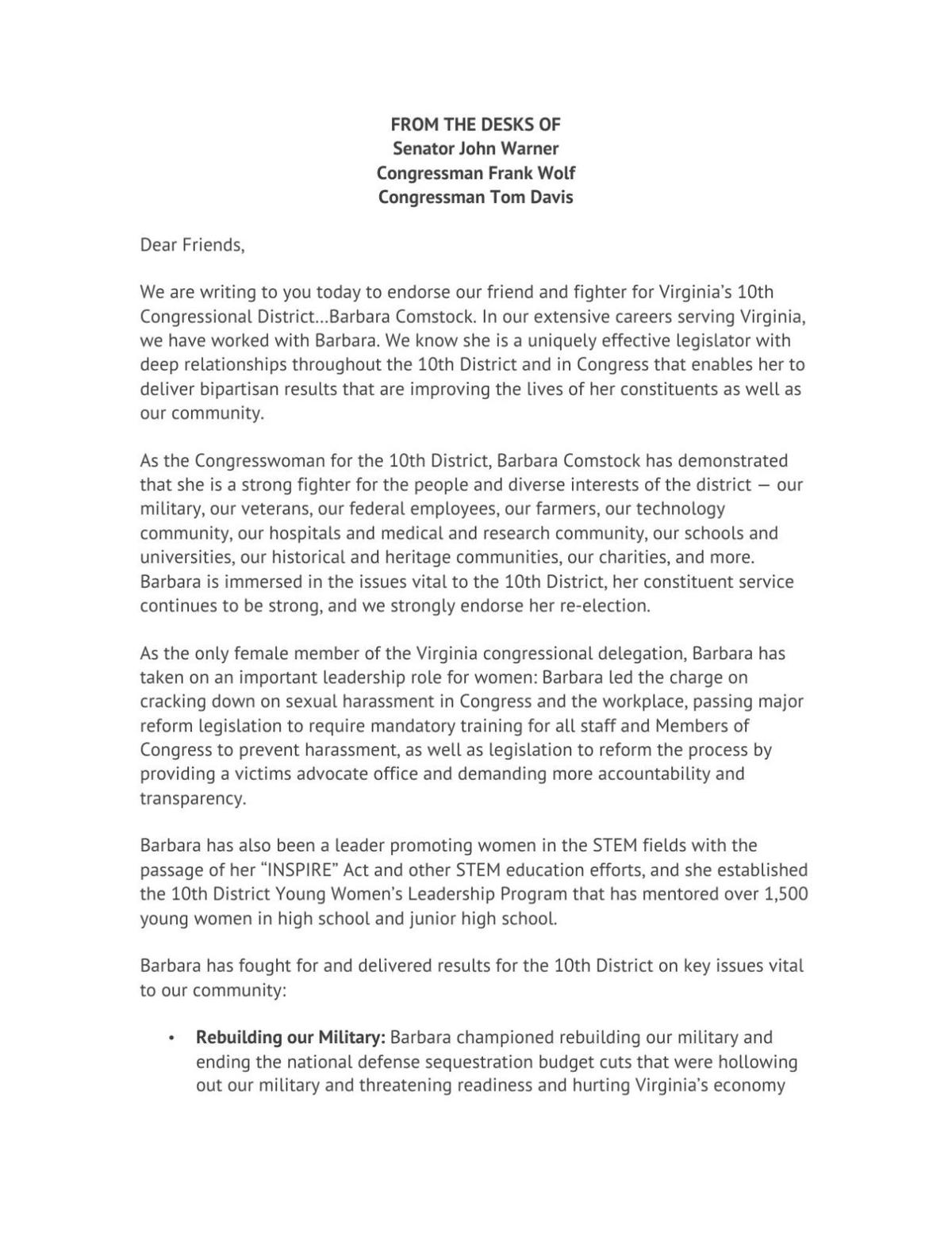 Trump is a fraud, lacks any moral compass and doesn't pay his share of taxes so poor working guys like me get to carry his fat behind. I find him disgusting and that's enough to make me vote Democratic, Whig, or whatever. I'll vote for anyone who says they'll go to Washington and vote in a way that holds Trump accountable and puts the brakes on his worst impulses. We're a better country than what he represents.

STATS if you please!

I'm always amazed how people throw out claims like "people come to Loudoun from other states to escape taxes...." etc.

Seems to me most people come here because of JOBS.

This is how stupid Democrats are. Obviously, many Dems have moved to Loudoun to escape High taxes and high regulations from other States. So what do they do? They vote for the same type of candidates/office holders they escaped from. Hopefully sanity prevails here and Comstock pulls this out.

OMG...an endorsement from someone who probably voted for Lincoln will go a long way. The GOP are on the ropes with Warner....but is why the GOP now stands for Grandpa's Old Party...when Hatch, McConnell and Grassley are on TV, it looks like the lobby in my grandfather's nursing home lobby.....eeww!

That means she won't get the pro-gun vote. And, it's not gonna help her with independents either since she tightly embraces the current GOP/Trump regime.

Dems who might have voted for her in the past? GONE..to find sane governance.

BTW Trump visits Loudoun often (his golf resort). Why hasn't he done a rally for Comstock in Loudoun? Probably because they can't find enough of his demographic to make a decent showing for TeeVee.

The Comstock v. Wexton will determine if enough Democrats moved into the 10th to make it a blue CD. There is nothing special about Wexton that makes her a shoe-in. Her victory will come down to Republicans v. Democrats population, since the 10th has voted Republican for 38 years (since 1980). With all the new arrivals into Loudoun County, the margin of Republican Victory in the 10th has been on the decline. 2018 will determine if Democrats now hold the majority.

There might be more to the results than you suspect, LoudounPulse. You aren't factoring in Comrade Trump and the desire for many voters of all stripes to send a message and some oversight to Washington on election day.