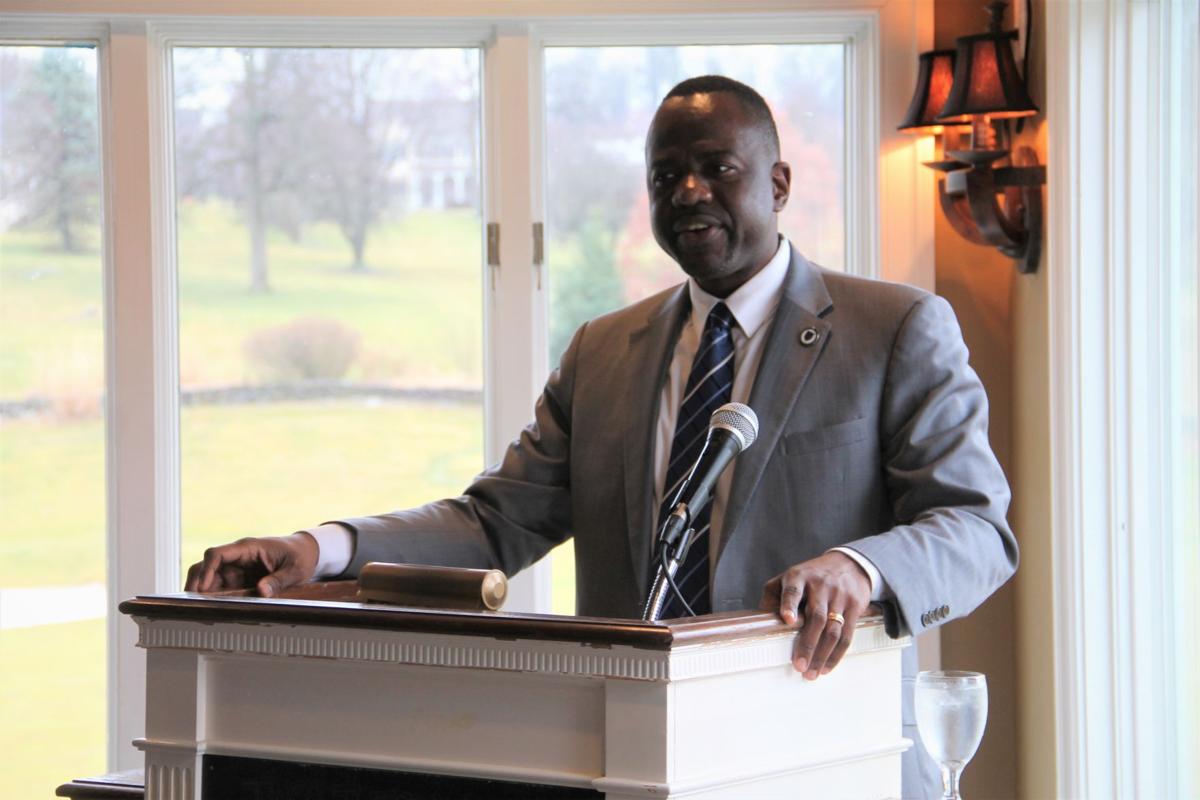 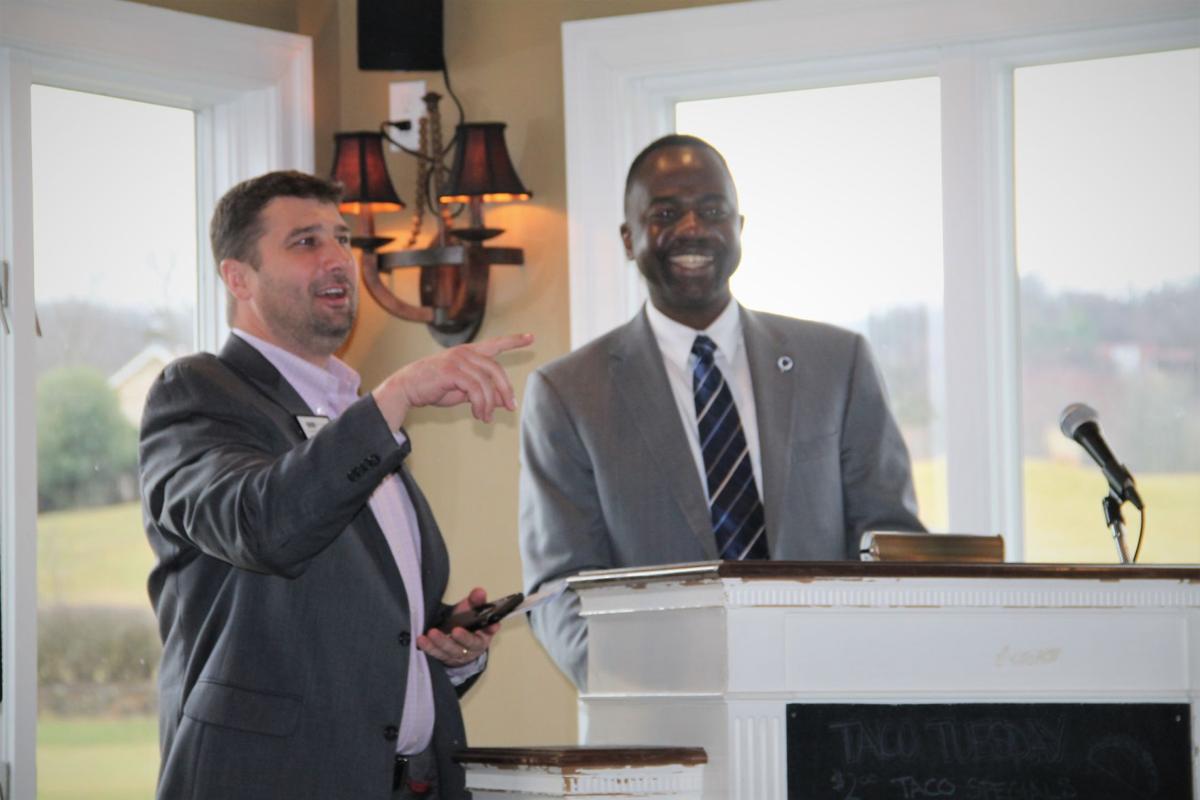 After presenting his annual state of the town address at Town Hall on Monday night, Purcellville Mayor Kwasi Fraser attended the Purcellville Business Association lunch meeting at Stoneleigh Country Club Tuesday where he gave round two of the speech for PBA members.

Fraser touched on many facets of the town, including the economy, debt reduction, the town's wastewater and water treatment plant, the police department and finding ways to improve on activities for the area's youth.

The three-term mayor is up for re-election in May and has not announced whether or not he will seek a fourth term in office.

In his address, Fraser said that while the town has had its challenges, the current state of the town is strong, and he believes it will rise above those challenges in the year ahead.

The mayor said areas of improvement for the town include a strong police force, which has grown from 16 to 20 employees in recent years and has outgrown its office space. Last year, the town began to assess options for other properties where a new police station could be located.

“We have begun to evaluate these options and they will bear fruit this year,” Fraser said.

After finalizing a lawsuit settlement with Chief of Police Cynthia McAlister over the town's flawed internal investigation, Fraser said he is ready to “move on, avoid further costly disruptions and bring closure.”

Fraser said the town's management team in 2019 began to execute many of the recommendations from their consultants, which he says will result in better system processes and service to the community.

He also anticipates the 2020 Comprehensive Plan will be finalized and adopted this fiscal year.

“Collectively the efforts of our Town Council operations and management team, committees, commissions and boards have brought us to this moment where the state of the town of Purcellville is strong and resilient. Purcellville remains your hometown, where history intersects with progress and people prosper,” he said.

Fraser cited other accomplishments for 2019, including implementing recommendations from an organizational audit of the town; implementing live stream for town council meetings; partnering with Loudoun County and Supervisor Tony Buffington on the A Street Trail; and safety improvements to Hirst Road.

He noted the town recently welcomed Bank of America to Main Street, the 10th bank in town. New businesses brought 137 new jobs to town, according to the mayor.

“Purcellville is the nexus of all economics in western Loudoun and is an economic hub. The prosperity of a community is measured by how long it takes one dollar to leave that community. With over 23 new storefronts and 18 home-based businesses, it is making it difficult for our dollar to leave Purcellville,” Fraser said.

He also mentioned the town's first art gallery opened in 2019 and the first mural was unveiled last summer. The third annual Cabin Fever Film Festival in January has grown every year.

“We are doing our best to engage the community in arts and culture,” he said.

Fraser said he would like to see more activities for the town's youth, including at Fireman's Field and Bush Tabernacle and at new county proposed fields. He is also considering a public-private partnership to build a bike and skate park.

“Our young people need outlets. Thirty percent of Purcellville's population are young people. What do our young people have to do in Purcellville? There needs to be more activities. One option is the Makerspace, which is a community asset teaching trades in high demand,” Fraser said.

Fraser acknowledged that debt is an issue in Purcellville.

“There is still a lot of debt, but it has been reduced to $54 million,” he said.

He said Purcellville has the “Cadillac of wastewater treatment plants.”

“It is world-class, but less than 45 percent is utilized so there is excess capacity. We will work with our consultant Davenport for ways to finance and restructure the debt and lower operational costs before the last resort of going to the taxpayer's pocket,” he said.

“Let's look at solutions to drive revenues so we can reduce expenses and pay down the debt,” he added.

Looking ahead, Fraser said there are “major tasks before us with debt reduction.”

“We need to identify unique ways to deal with 55 percent excess capacity at the water treatment plant. The town's population is 10,500, and we do not want the town to grow by 5,000. We need to be prudent in how we look at development, and one way is how can we identify users that will have more need for processing water and water treatment whether it be a mini hospital or other things. There are ways for us to have unique users to come into a community,” he said.

Fraser suggested ways to monetize town assets, including providing excess effluent water for new and existing county facilities and construction projects; building another cell tower to receive revenue; agriculture and technology innovation at the 189-acre Aberdeen property; partnering with local businesses for another town mural; making the train station an asset by creating a visitor center and museum; finding ways to get money back by preserving green assets and a possible managed hunt program on town property.

“Purcellville has and will continue to experience challenges that test us, yet I remain confident we will persevere to maintain the small town atmosphere and values for a place we call home,” Fraser said.

Sally Crosen said she was excited to hear his proposal to create more venues where young people can go.

“There is nowhere for them to go at night,” Crosen said.

Ted Argleben said he was glad to hear about the priority of reducing town debt. He also appreciated the proposal for more recreational opportunities for young people, and he thought the recent Cabin Fever Film Festival and the other town festivals are great for residents and the surrounding area.

Argleben would like to see the town properties used for hunters who could pay a fee to hunt on the property.

Clinton Chapman said he was concerned about the town debt.

“I don't believe they have a handle on how to control the debt, and it appears the town is against growth. This is shutting down a huge portion of potential commercial properties that bring revenue and will not cost the town,” Chapman said.

Purcellville and VDOT need to address their road issues. People talk growth, but when it takes over 30 minutes to go from The town to Route 9...that is an issue. How about fix this first before looking at growth opportunities. Don’t even get us started on the new left turn light to get on Rt 7 West. With no proper left lane long enough, that light is just an afterthought.

While not politically acceptable to voice, perhaps the Mayor should be discussing the long-term realities that are facing his town, as well as the other towns not named Leesburg...

With a constrained growth area, reliance on real estate taxes, mounting costs and debts...should these towns retain their current structure? Would dis-incorporating better serve their citizens? Other than protecting the employees of the towns, what public service are they providing?