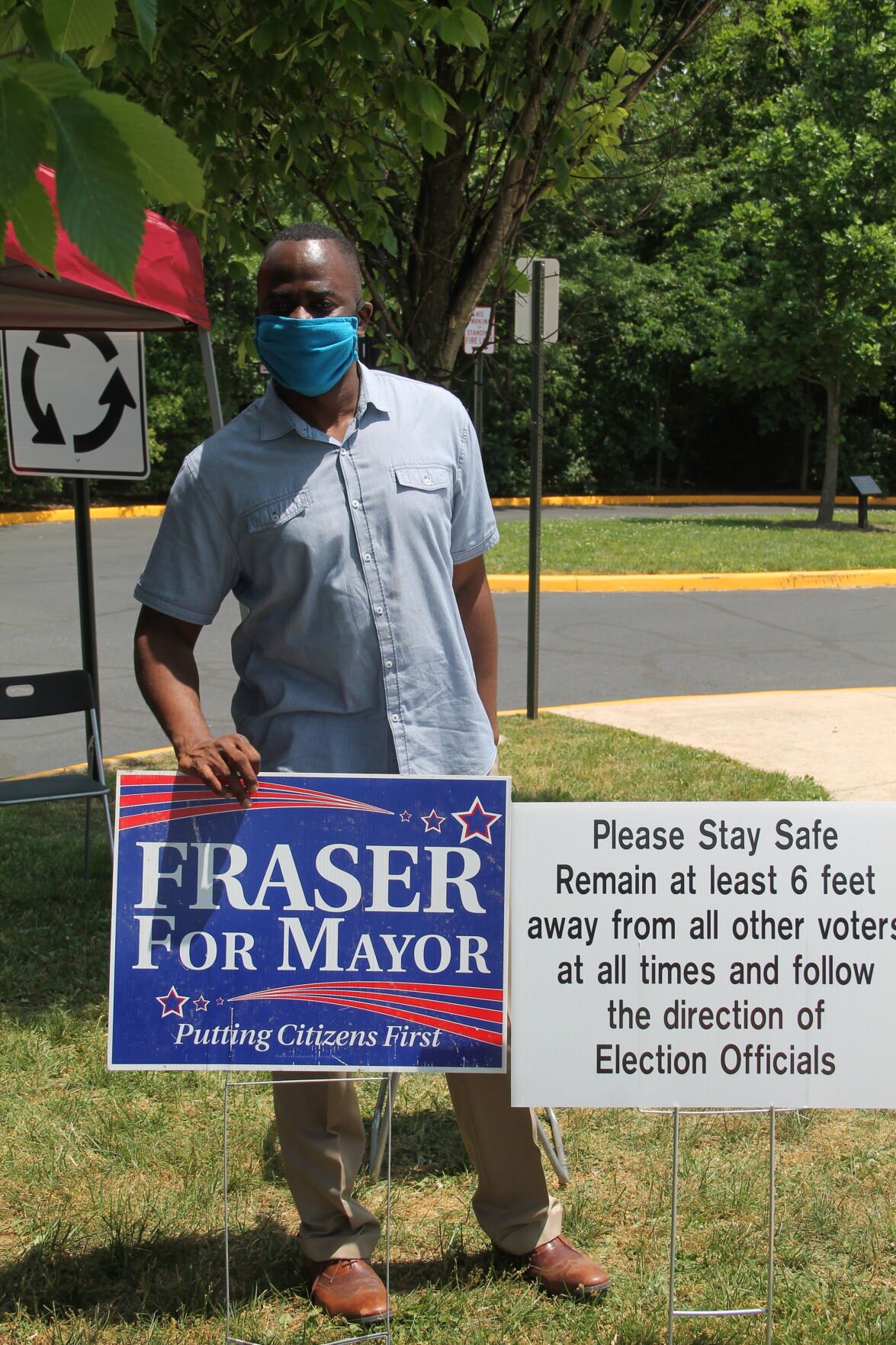 Purcellville Mayor Kwasi Fraser at the polls on Thursday. 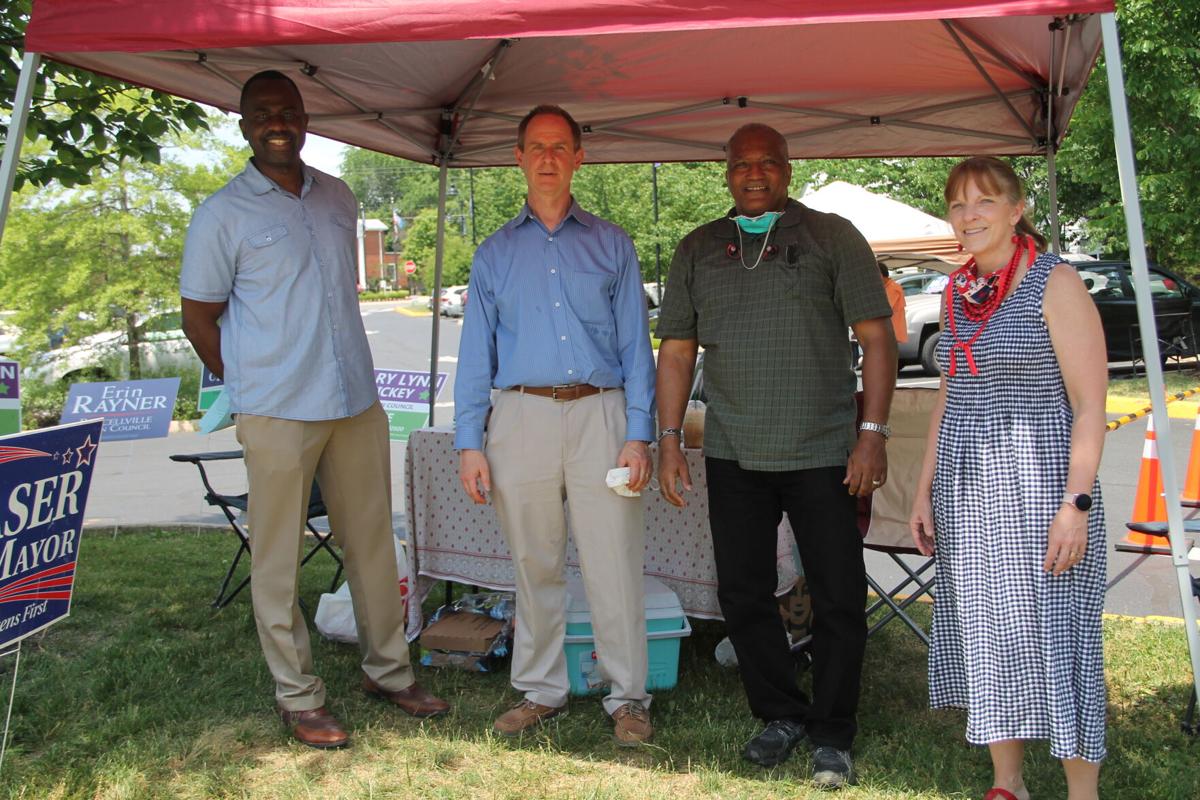 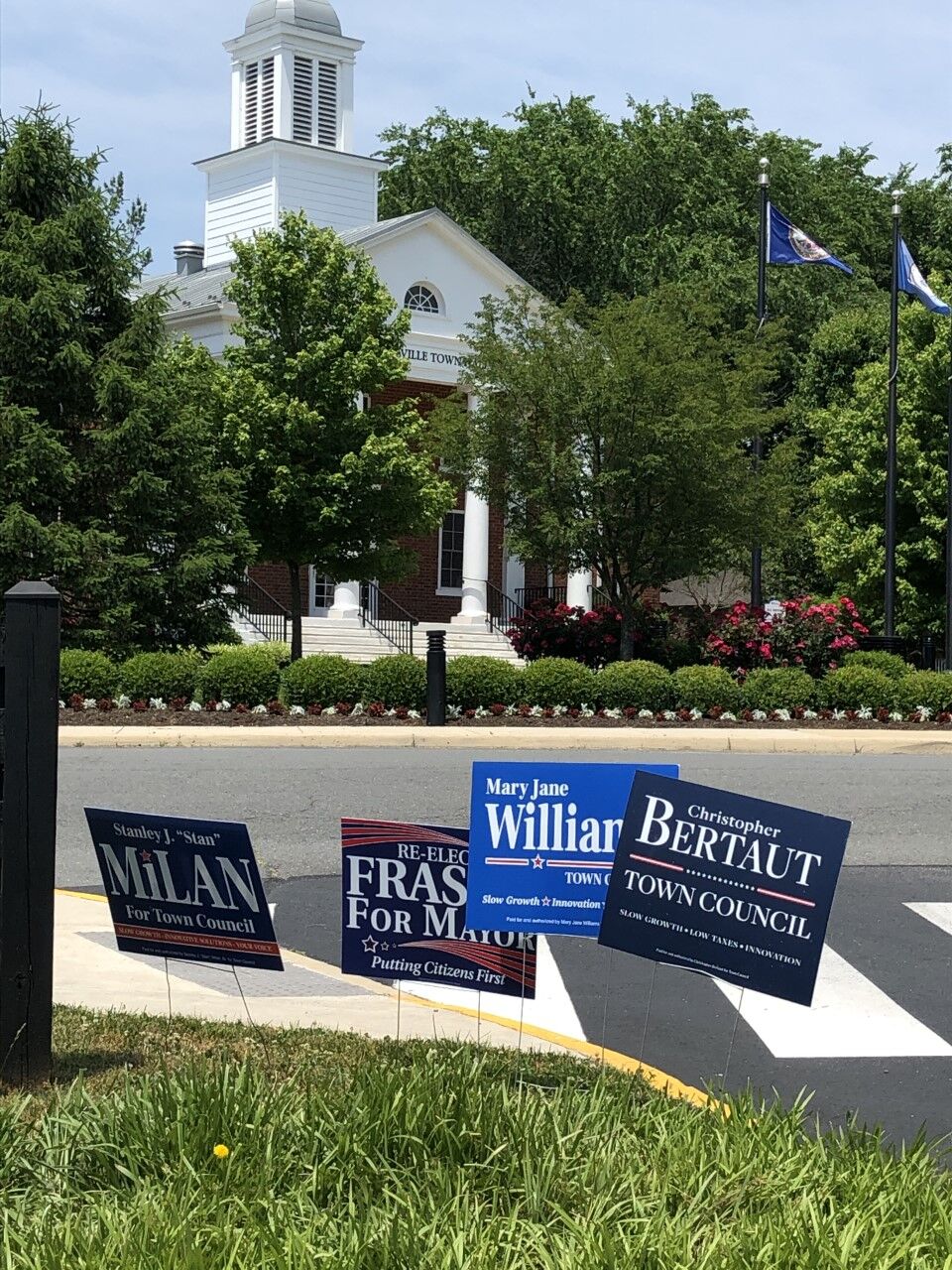 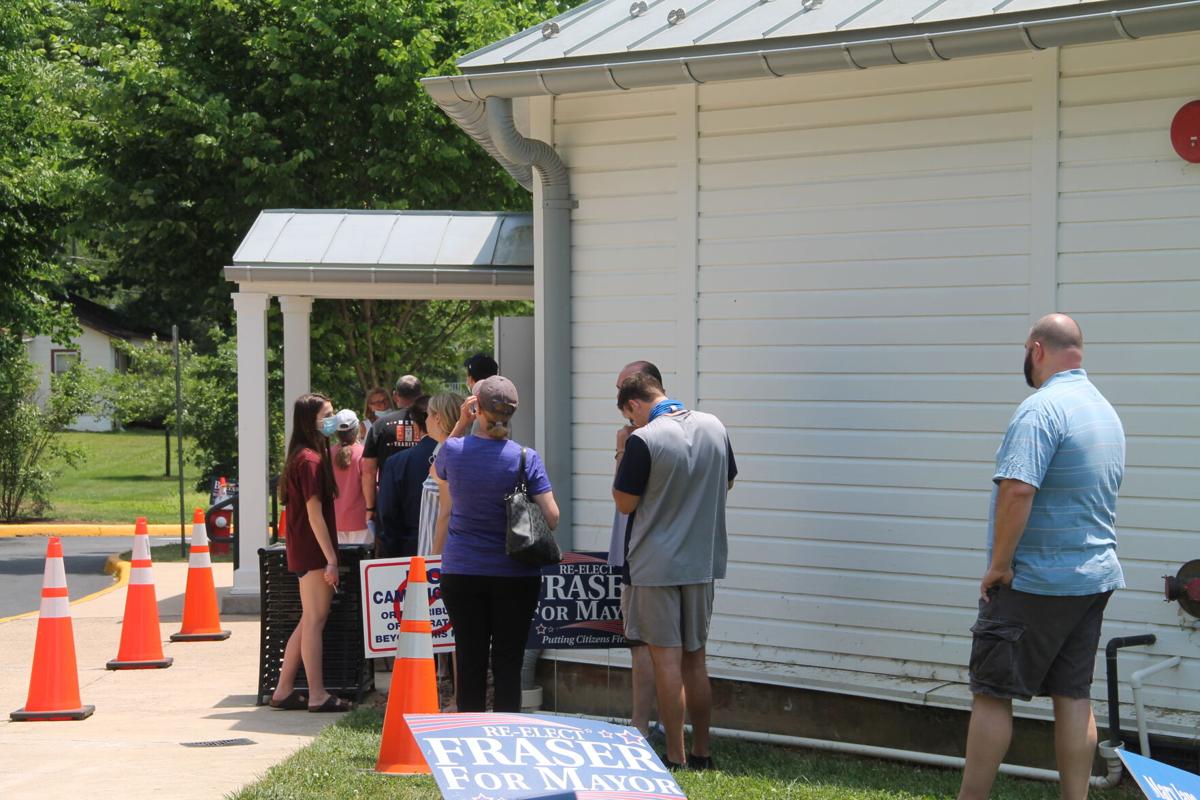 A line of voters waiting to get into Bush Tabernacle for the June 4 town elections. 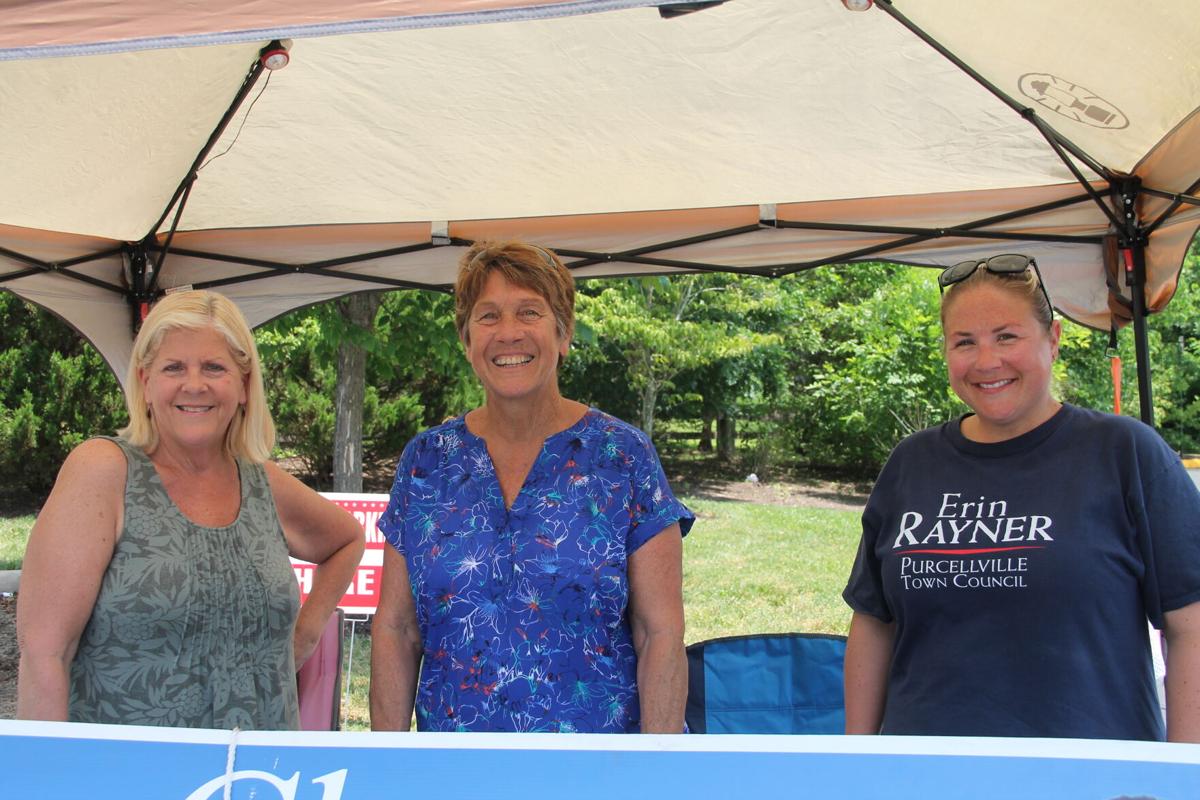 Purcellville Mayor Kwasi Fraser at the polls on Thursday.

A line of voters waiting to get into Bush Tabernacle for the June 4 town elections.

Purcellville Mayor Kwasi Fraser has won a fourth term as mayor in the western Loudoun town of about 10,000 residents.

The incumbent mayor was being challenged by former Town Council member Beverly Chiasson, a long-time resident of the town.

For Town Council, there were three open seats, and Fraser's slate claimed all of them, with Mary Jane Williams, Chris Bertaut and Stan Milan winning. They bested Mary Lynn Hickey and Erin Rayner, who ran alongside Chiasson.

Earlier today, Fraser told the Times-Mirror he felt optimistic about the outcome and was pleased with the voter turnout.

After the votes had been tallied, Fraser said on social media, "I am both humbled and honored that you have placed your confidence and support in me once again and Council-Elect members Bertaut, Milan, and Williams who will work beside me to push forward our citizen's vision for Purcellville. In these difficult times right now, I will work tirelessly to make sure that our Town is resilient, safe, and prosperous."

Election Day was previously scheduled for May 5. However, due to concerns surrounding the coronavirus pandemic, Gov. Ralph Northam (D) pushed the date back two weeks. The town later petitioned the Virginia Supreme Court to move the date to June 4.

for the people of Purcellville, it was all about the vision for the town, if not necessarily the administration of it. The other candidates for mayor and council supported a largely pro-growth agenda. People in Pville like the quiet small town and voted to preserve it.

Mayor Frazier well deserved re-election, as well as councilmembers who support his goals. Purcellville citizens know to read beyond some headlines, and realize that the mayor's terms have been distinguished by the honest cleanup of messes created by others - cleaning up a budgetary deficit created by his predecessor and cronies, cleaning up a legal embarrassment created by a rogue manager, and putting a stop to the plans of development interests who would make the town unrecognizable, and plunge it back into debt.

Congratulations Mayor Frazier, and thank you for continuing to do what is right for Purcellville.

The name is spelt FRASER, there is no "zier". It is british.

PURCELLVILLE deserves whatever happens to it. 4th Term for a Mayor that’s completely failed the town, really!

I know or care little about Purcellville politics, but it is shocking to see a Mayor get 4 terms when this Town has had one scandal after another as of late, lawsuit after lawsuit, putting taxpayers (I'm afraid even those outside of the Town) on the hook because of boneheaded decisions and outrageous ethical conduct. Last time I checked, a Mayor is the head of the town, so this has all happened on his watch. I'm afraid it's a microcosm of clueless voters who fail to even look at a politician's accomplishments and fail to hold anyone accountable.

My outrage is that any politician from any party gets 4 terms. Term limits should be implemented for every elected position.

Write the SOP & change it instead of Whining about ur outrage.

Why don't u go & fix it then instead of spouting Sir.

Congratulations Mayor Frazier- I don't live within the town limits but had I, I would have voted for you.

To look at this positively for Purcellville, Fraser’s last clean sweep team will all be off council with nothing left to remember them by other than dozens of embarrassing headlines, loss of staff, and wasted tax dollars. Jimmerson has been extremely desperately waiting for Cool and Ogelman to join her and Grimm in life post disgraced public official position. it’s a tough job for one Karen alone.

By the way, loudoun4Trump, this was a LOCAL election, not the national contest that seems to define your existence.

if it doesn't impact you and your not a resident, why comment. With your "handle" you do no favors to the POTUS. Think before you type!

And I am sure Sister City will be first on his list even though Purcellville has so many problems already! The people that support him deserve what they get and it sure won't be anything good!

While I don't live in P'ville, I was glad to see that Fraser won. A slap in the face to the Loudoun4Trump hate filled mantra's seen here. How can anyone support the BIg Orange Goofball is beyond me. He is the most anti American president we have ever had. To suggest cops get tough is just foolish and ignorant. But he proved that everyday of his admin starting with his lies about the size of his inauguration crowd. Hang on, November is coming and we will right the boat once and for all.

I could care less who governs Purcellville...I don't live there, and judging by the voters will not move or invest there anytime soon...I guess a differing opinion is now deemed "hate filled" mantra by leftists....sorry sky, if this is where you derive satisfaction it may be time for a check up from the neck up...

Am nit holding my breath...too many people come out from under their rocks and gun safes to vote. I can't believe that Republicans are STILL supporting him! Both parties are a disgrace and very few have the "cojones" to stand up for what is right...putting politics and money aside, and doing what they were elected for taking care of the PEOPLE!

The people of Purcellville have spoken.

Good Luck Pville - You are gonna need it.

The Mayor will keep looking for the Pot O Gold at the end of the Monetize Assets Rainbow until it all comes crashing down and the Town ends up bankrupt.

Lot of good that Tony Buffington endorsement did for the competition, eh? I hope Mayor Fraser can find it in his heart to ignore that meathead move.

My man, turned back the knuckleheads again. The revolution will be televised!!