A man is shown in a Loudoun Rural Landfills video stands in front of a dumping site just east of Hamilton. The site was approved as a “personal recreation field.” 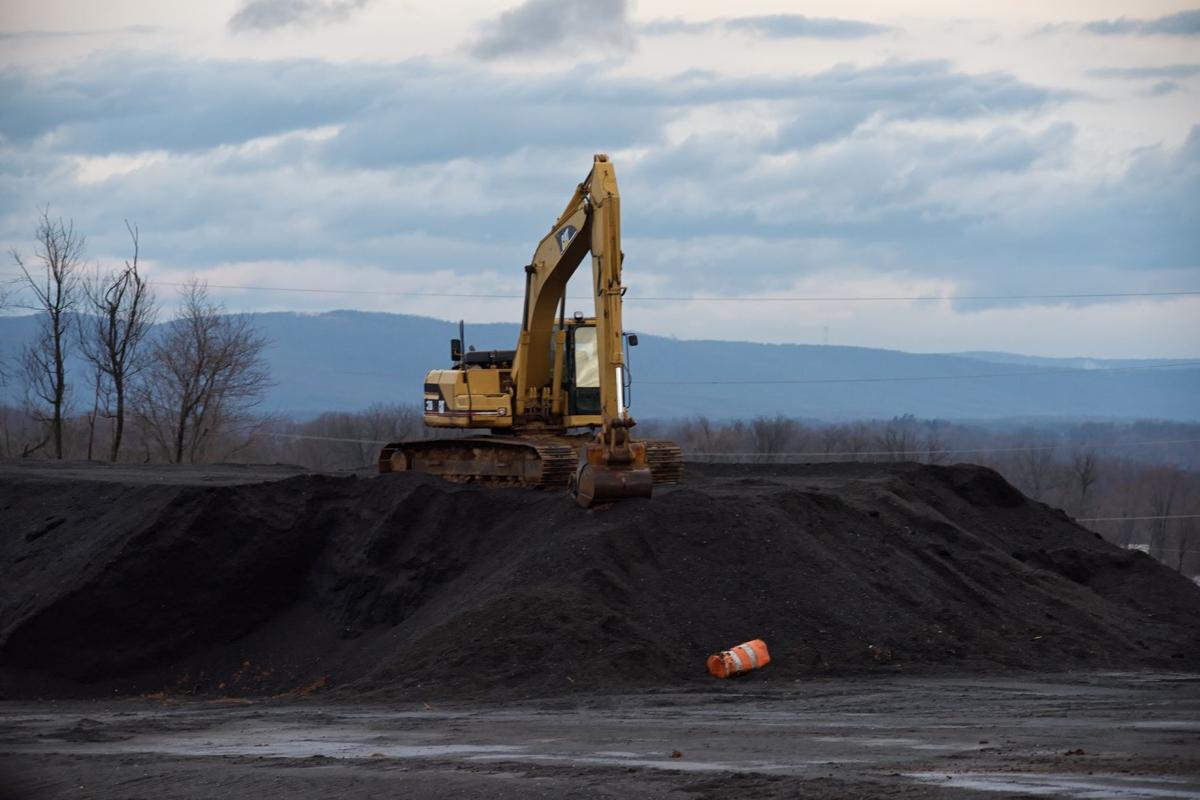 A man is shown in a Loudoun Rural Landfills video stands in front of a dumping site just east of Hamilton. The site was approved as a “personal recreation field.”

The owner of Gable Farm Property, which is located near the Town of Hamilton, was found to be in violation of Loudoun County’s Zoning Ordinance and ordered to make several corrective actions by next fall, according to court records.

An order of abatement, also referred to as a corrective action plan, was signed on Nov. 3 after the property owner was found to have hauled fill dirt onto the property over the past few years, which created elevations greater than approved in a site plan for the proposed use on the property, a Nov. 24 release stated.

Gable Family Limited Partnership must complete the abatement actions associated with the moving of fill material by Nov. 15, 2022. A $200 fine was already paid to the county, the release states. 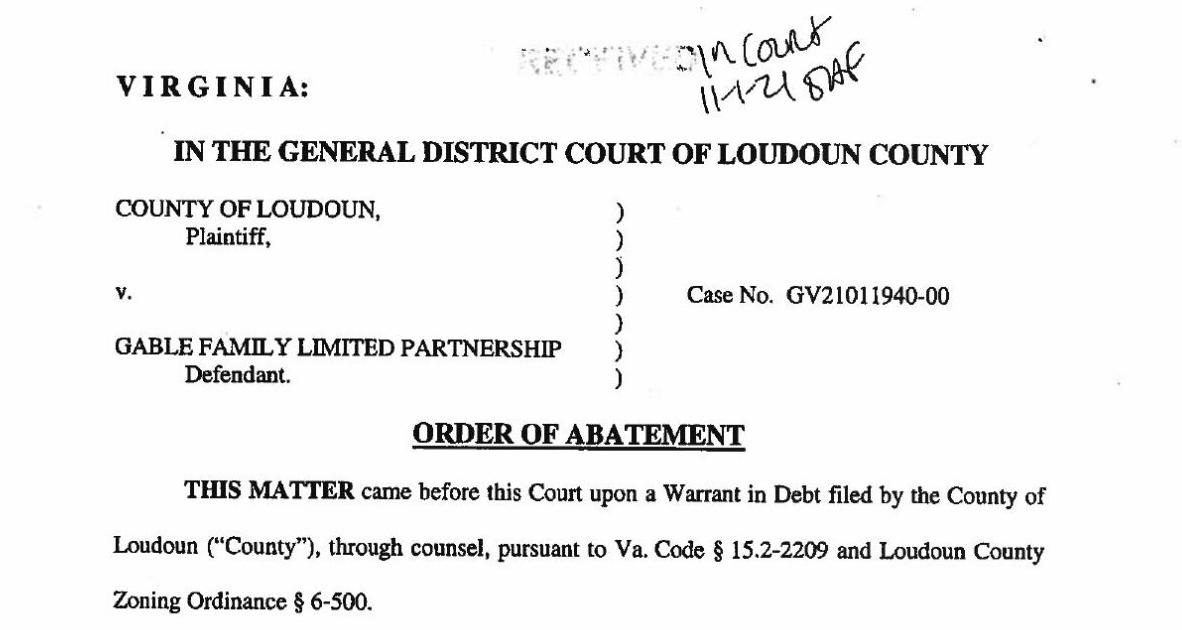 “The order memorializes the parties’ agreement regarding the remedial actions to be taken by the property owner, and it provides a mechanism for the county to enforce the terms of the Abatement Plan in the future, if necessary,” said Loudoun County Senior Deputy County Attorney Courtney Sydnor, in an email to the Times-Mirror.

The 18-acre property originally approved as a “personal recreation field,” or a polo field, turned into a stockpile, said county officials when the Times-Mirror first reported the case in 2019.

As previously reported, the Virginia Department of Environmental Quality ruled that there was no evidence of material contamination at the farm. The county was still seeking a corrective plan from the property owner to address the stockpile for top dirt and asphalt millings, which are considered for commercial use and violate the approved plan.

DEQ officials said the fill at the property contained soil, bricks, asphalt, concrete and rocks. Additionally, a nominal amount of woody vegetation, silt fence fabric and a lightweight plastic called polyvinyl chloride was found. Staff did not observe any evidence of contamination such as an oily sheen or chemical odor.

DEQ’s assessment follows a video published at LoudounRuralLandfills.com that was released in late February 2019. The video describes the site as “intrusive, potentially harmful and potentially very lucrative.” The creators questioned the land use approval and whether there could be similar issues at other sites if the county doesn’t adopt stronger regulations.

Residents and leaders also questioned the height, volume and contents dumped on the “personal recreational field.”

County officials sent the property owner at least two violation notices in 2017 and 2018 and told the owner to discontinue all activities until corrections were addressed.”

The court’s order requires the property owner to accomplish the following remedial actions:

- Disburse any remaining fill within specified areas of the property provided elevations do not exceed the levels indicated in the Abatement Plan following approval of a Grading Permit.

- Upon completion of the work described above, the property owner must hire a third-party surveyor or engineer to confirm elevation and grades of fill dirt. 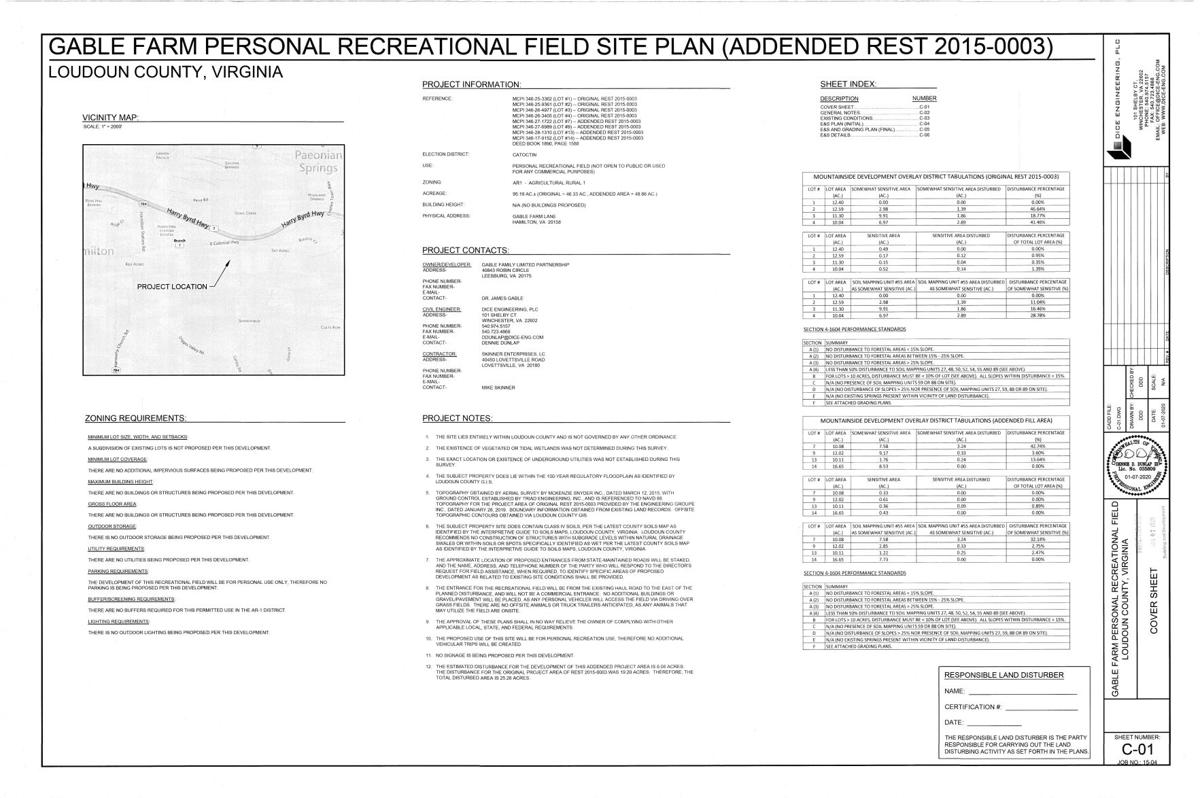 "Did not observe an oily sheen", etc. Is that what passes for an environmental assessment? no testing at areas where liquids were observed leaking from dumped materials? no water quality monitoring? no comparison with baseline stream monitoring? Is this what passes for Loudoun County protection of public and environmental health? There of course is no penalty at all for lying about what you plan to do on your land. At most the county says tsk, tsk, and fines you...$200??? That is why there is rampant disregard for county ordinances by bad actors. They always get away with it. The BOS needs to take a sharp look at how county bureaucrats are governing this county. It's a disaster.

Have them remove the dirt and debris back to preapproval site plan levels.