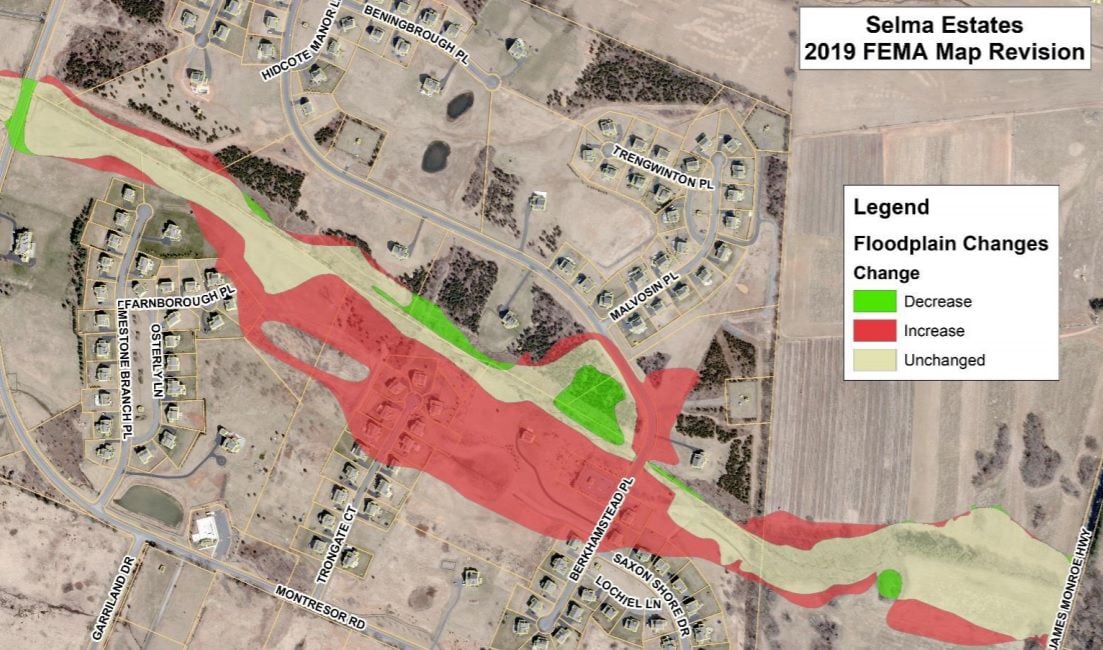 A diagram of the Selma Estates homes in the "special flood hazard area."

A diagram of the Selma Estates homes in the "special flood hazard area."

Fourteen Loudoun County homes north of Leesburg have been flood targets for years, but now the county is considering aid for eight homes in the special flood hazard area.

“This is an impossible situation ... individuals have nearly drowned,” Catoctin Supervisor Caleb Kershner (R), the area’s representative, said. “They have lost their homes, they’re having to pay for two homes in the midst of COVID while also losing jobs and the list of issues continues.”

Last year the board directed staff to prepare a plan for establishing a home buy-out program.

Fourteen homes were identified as being susceptible to flooding in the case of a 100-year storm event, and a small number of homes may experience flooding during a less intense storm within 10 years, according to an earlier study from engineering consultant Wood PLC.

Since engineering began in the early 2000s by Christopher Consultants, followed by home construction in 2013, residents have experienced reported basement floods in 2013, 2015 and 2018.

Residents impacted by the flooding have been in homes along Farnborough Place, Osterly Lane, Trongate Court, Berkhamstead Place, and Saxon Shore Drive. They are surrounded by more than a dozen sinkholes in the development, which was constructed by Stanley Martin Homes.

In 2018, the Federal Emergency Management Agency (FEMA) was contacted by then-Congresswoman Barbara Comstock (R) to study the issues surrounding the floodplain. By June 2019, FEMA found that the floodplain was not properly delineated, and the agency issued a correction to the floodplain boundary, which impacted about 25 properties.

The development consists of 277 lots. Construction began in 2003.

Last December, the county Building and Development Director Alan Brewer said when the engineering group submitted its floodplain study based on FEMA’s map version in the early 2000s, the 100-year floodplain did not exist.

However, with improved technology, additional staffing and training, Brewer said he felt confident any future errors will be caught. County staff has since acquired updated mapping information from FEMA, as well as in-house mapping tools.

County staff said some of the eight homeowners in the special flood hazard area are considering the buy-out program. A few homeowners are in litigation with the building companies.

Kershner said he’s reluctant to spend county funds on the project given the “stubbornness” and “unwillingness” of the two companies. But, Kershner said, if the companies can’t step forward and offer solutions, the matter is the responsibility of the board.

“If they cannot step up and take care of a few homes where clearly an engineering study has gone wrong, then they don’t deserve to do business in this county,” Kershner said at the Oct. 13 finance meeting.

Supervisors agreed with Kershner, his frustrations with Stanley Martin Homes and Christopher Consultants and that homeowners were being forced out of their homes.

“Something happened here, own up to it, help our county residents out, help your customers out,” Vice Chairman Koran Saines (D-Sterling) said referring to the two companies.

Chairwoman Phyllis Randall (D-At Large) added, “It’s not just that you lose your house, you lose your home and all the memories that come with it. And when you’re throwing things out that may feel like just material things ... that’s part of their family’s history and that’s their home.”