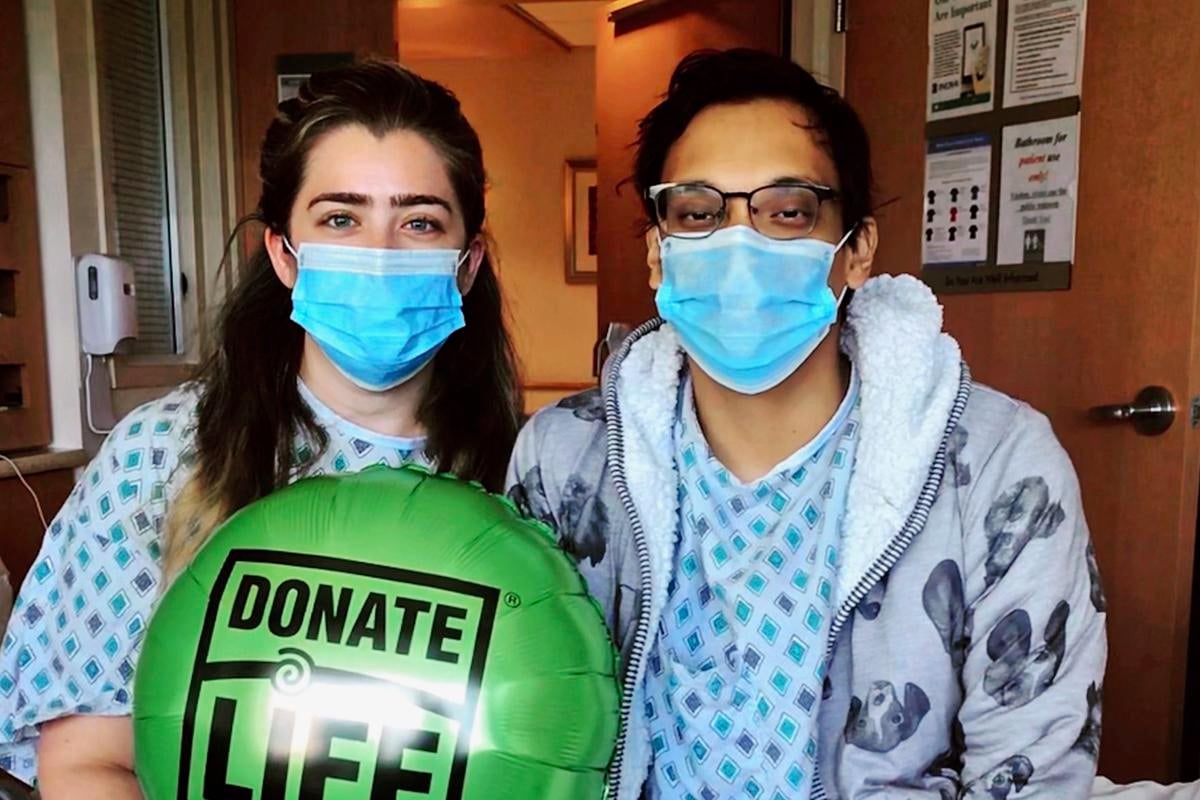 Sarah Mozeyko and Kevyn Balladares rest in Inova Fairfax Hospital after she successfully gave him a new kidney on June 24. 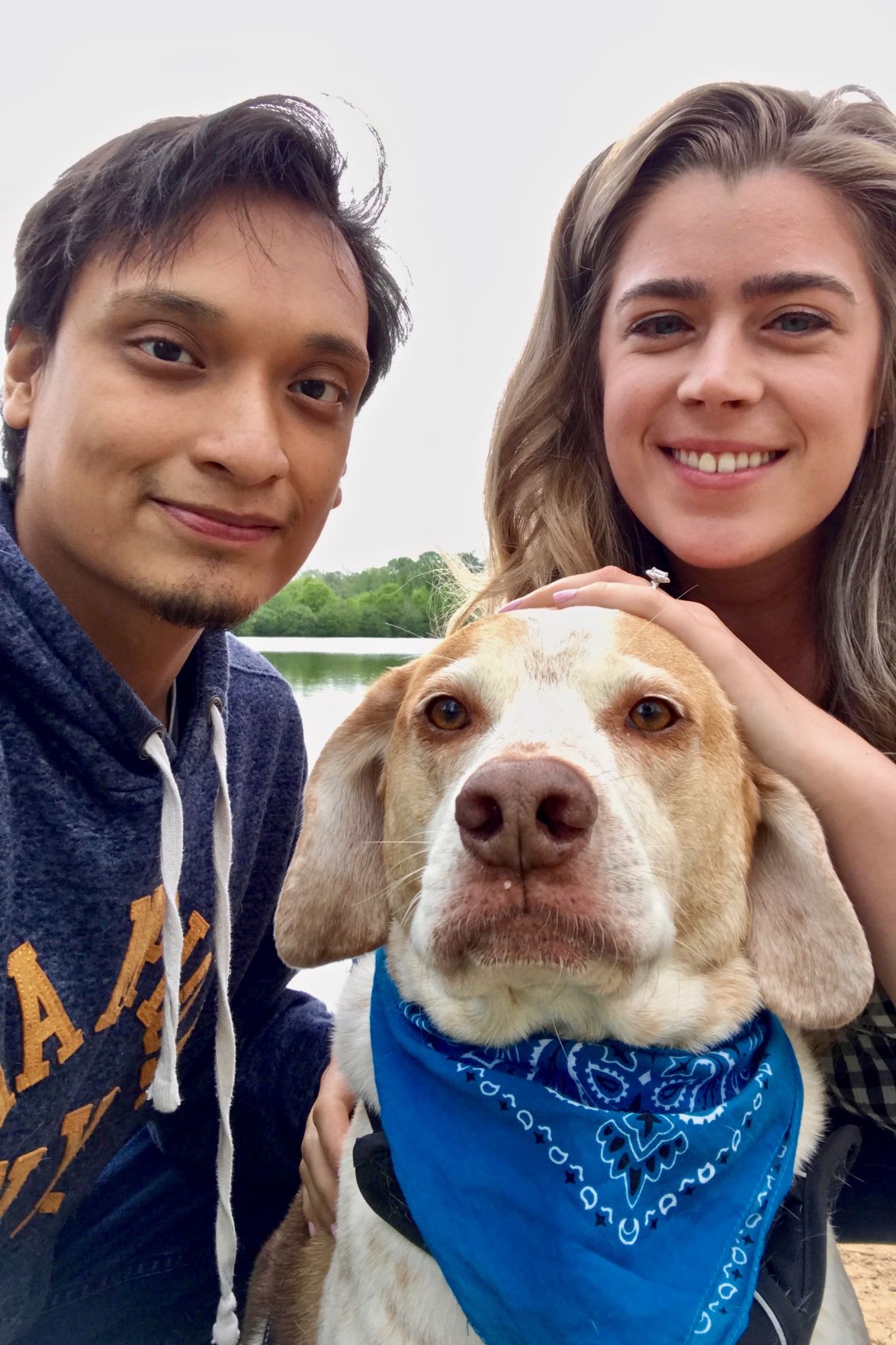 Then, last month, she literally became a part of him.

Mutual friends introduced the two while they were in their teens. Balladares, originally from Peru and now a resident of Round Hill, went to Broad Run High School, while Mozeyko, of Aldie, attended the since-closed Leesburg Christian School. However, it took several years of persistence for Balladares to finally win over the woman who would eventually become his fiancée.

“I kept being annoying. Things always circled back to her; I always wanted to go back and chase after her, and after all this time I guess she got sick of it,” he joked during an interview with the Times-Mirror.

“Even when I would turn him down, we would take our little break from our friendship, but eventually just go back to being friends again,” Mozeyko added. “It just kind of happened. We’ve been dating for a little over two years, and we just got engaged May 21.”

From the beginning of their relationship, Mozeyko knew about Balladares’ history of renal issues. But those problems rarely resulted in any immediately apparent symptoms, and his past doctors had informed him it would not become a serious issue until he was in his 30s.

“The thing that really bothered me the most was that I didn’t feel anything,” he said. “I was OK, I was out running, I was out playing soccer and working full-time and going to school.”

Balladares had also been previously diagnosed with thin basement membrane disease, a relatively common and benign disorder. But when he contracted a case of the shingles last July, Mozeyko encouraged him to visit the doctor, where he discovered he was experiencing stage-five kidney failure.

“Next thing we know, I’m at less than 20 percent kidney function,” he recalled. “It had progressed so much more than we thought it would.”

To make matters worse, his TBMD diagnosis turned out to be errant; he, in fact, had Alport syndrome, a genetic and much more serious disease. He soon began attending regular appointments with the transplant team of the Inova Health System, for whom Balladares works as a clinical technician at the Loudoun campus.

Nearly four months passed, and the couple had yet to find a donor. The majority of Balladares’ family were unable to donate due to various complications such as high blood pressure. Eventually, Mozeyko predicted that, though she had initially signed on to merely be his main care person, her kidney would be the one her then-boyfriend ended up receiving.

“I was like, ‘Look, you’re going to be O positive, that’s the same blood type as me, and I’m calling it: I’m going to have to be your donor,’” she said. After taking it upon herself to get checked to see if she was a match, her suspicions were confirmed, and she gave him the news as a Christmas present.

“I was the best candidate because of my age, my blood type, and I’m in his location,” she explained. “Some of the people reaching out were in Peru, another was in Texas.”

Mozeyko continued, “It was a major decision to talk about with my parents and with Kevyn as well, because I have family history of high blood pressure … and I would be considered a high-risk pregnancy. It was just certain things in my future that were put into more of a perspective, even though I’m not really thinking about that right now.”

The couple had their share of frustrations leading up to the transplant, which had been scheduled for late June. For one, they ended up postponing their wedding until 2022, as Balladares would not be allowed to leave the U.S. for two years after the surgery. The pair were hoping to honeymoon outside the country.

Further, they had scheduled a trip to Spain in March to enjoy some time abroad before being stuck stateside, but the COVID-19 health crisis quashed those plans.

“We worked our butts off nonstop for months and months and months, and it comes literally to the last week … and then next thing you know, we can’t travel,” Balladares said. “I said, ‘Well, I’ll go to work tomorrow.’”

The pandemic also led Balladares’ workplace to eventually become a full-time coronavirus care center, meaning he, in his susceptible state of health, could not report to work. Atop the many logistical conflicts, his relationship to Mozeyko was frequently tested.

“As the months went by we argued about it: I said, ‘I can’t believe I’m going to take part of you,’” he said. “I didn’t want to see my girl be hurt. But she made it perfectly clear that she’s strong enough. I felt more blessed and grateful for her as the months went by.”

“I knew it was more of a calling when I found out the results,” Mozeyko added. “I said, ‘OK, I was called to do this.’ Obviously this guy kept running back to me for a reason. I’m here to do this, and everything’s going to be OK.”

The couple said they often rely on their Catholic faith, not just during the hard times, but to put their everyday life into perspective.

“Everything happens for a reason, and God knows what’s best,” Mozeyko said. “Not many husbands and wives can say that they’re a physical match … God made us perfect for each other.”

After months of waiting, Balladares and Mozeyko finally went in for surgery on June 24 at Inova Fairfax Hospital. The transplant was successful, and three days later, the two were released — closer than they had ever been, in more than one way.

“We keep finding ways to be grateful,” Balladares said. “And I’m especially grateful for Sarah, who’s been keeping me calm all this time.”

Grew up going to school and playing sports with the Mozeyko's. One of the kindest families you will ever meet.

Good luck to both of you , you deserve the best life has to offer. A happy story for a change.

Best LTM story of the year!!! Wow, talk about fate! They are truly blessed!

My man you truly are blessed. I'm lucky to get the occasional dinner out of my wife at this point, LOL.

What a wonderful story. Best of luck in your future.