Local coronavirus cases as of June 2. 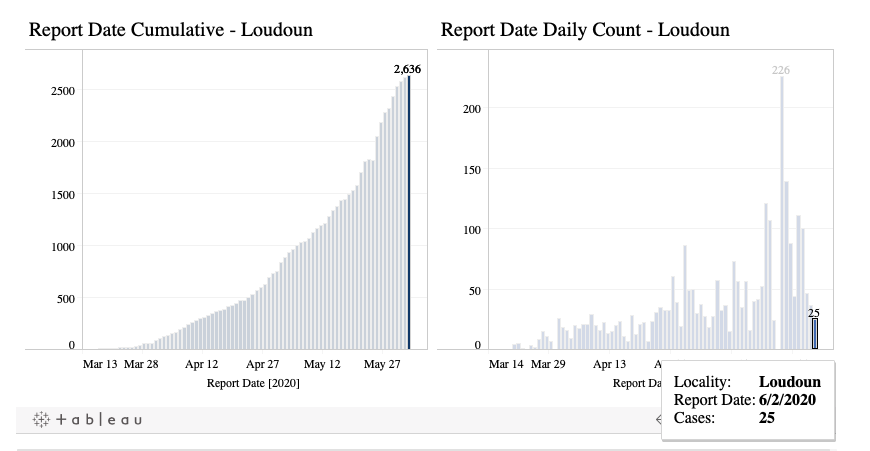 Coronavirus case data as of June 2. 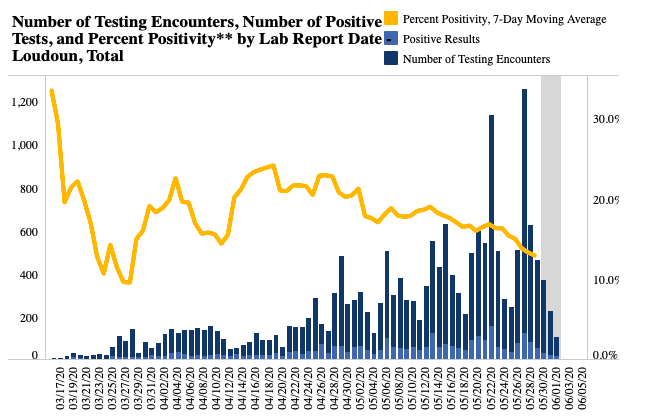 Local coronavirus cases as of June 2.

Coronavirus case data as of June 2.

Another Loudoun County resident has died as a result of COVID-19, state health officials reported on Tuesday, bringing the county's total number of the coronavirus-related deaths to 67.

Loudoun County's confirmed COVID-19 cases stand at 2,636 on Tuesday, according to the latest figures reported by the state. The case count increased by 25 from Monday’s reporting. 165 people in Loudoun have been hospitalized.

While most of the commonwealth's economy will reopen Friday, Gov. Ralph Northam (D) has again delayed northern Virginia, including Loudoun County, from moving into the next phase of reopening.

-"Latest e-edition of the Loudoun Times-Mirror"

-“Helpful links for job-seekers, businesses during the coronavirus pandemic”

-"Q&A: Goodfriend, Hubbard detail the state of COVID-19 in Loudoun"

No AG we place value on life, you do not as you support the riots and murders and killings and looting and lack of rioters social distancing while "Coonman" destroys everyone. Leave this area go to CA that is where you belong.

Your response is as bigoted as apparently you are. And an increased number of cases has more to do with individuals who refuse to take the proper precautions- and THAT is not race related.

wrong, you put value on life when you feel like it. You make racist hurtful re,arks and wear them like a badge, you don't respect other people or lives at all. Then you tell people to leave? You know where you can go, and you'll fit in well!

To the family of the "one new death" I am so sorry for your loss. There are many of us that wear mask, respect the laws during this pandemic until this virus can be figured out and mourn your loss with you.

Now I read in the LTM comments that one very prominent advocate of Stay-At-Home-Forever / Cower-in-Place was in Washington DC during the riots. This person has previously stated that people have no reason to be going out. Businesses need to remain closed. If you go out YOU'RE KILLING GRANDMA! You're endangering people who have health issues. And now, through this little revelation, we learn that the rules only apply to others. All those hundreds upon hundreds upon hundreds of posts were pure BS. You only care about your own world. Same goes for anyone else riding this hypocrisy bus.

I don't think she is commenting on articles that do not mention a protest any longer.

You wear a mask at the damn grocery store and you wash your hands and you keep your distance and you show kindness to cashiers and you follow the simple rules put in place to keep people healthy and alive because that's what decent human beings do, and because 100,000 grieving families deserve it.

Don't be such an idiot. I said that people had to go out, remember examples, grocery stores, doctors appt.s. You are such a liar. I had every reason to go out. It was important to support the rights in this country. You wouldn't understand because you've been busy restricting other peoples rights, like only the young can go out. So many lies makes me think you have mental problems. Go with the times acey, the circumstances then are not the same as now. If people went out in a year from now would you start with the same story?

Just so I understand this correctly... circumstances have changed to such an extent that in the course of 3 days... THREE DAYS.... that mass gatherings WON'T KILL GRANDMA. You're a liar. It's all politics to you. You've been exposed. NOTHING CHANGED IN THREE DAYS. Covid was THE WORST THING IN THE WORLD up to last Thursday, and then it became something less important than mass virtue signaling on Sunday. Three days ago you didn't want anyone to make you sick. Your husband sick. Grandma sick. You've been singing that same tune for months. And now you shrug your shoulders. I want to vomit.

Since you never understand anything correctly, I doubt you'll get it. They are phases of opening. These protests could keep other unarmed blacks from being killed. It might still be the worst thing in the world, the new cases in the world are rising fast. Let's see, you had no problem killing grandma if it meant reopening business, and when they have hit the next phase of opening NOW you want to claim they will kill grandma. Do you even know how that phrase originated? I read it in this paper years ago. It was because Chuck Grassly and the republicans wanted those conditions put into the Medicare act to protect the elderly near the end of life. Everyone agreed and it went in. When the ACA was being written they wanted to include it in that too. Everyone agreed and it went in. It was a republican thing, not a democratic one. But then they twisted it to make it sound like the dems were killing grandma. That's why Grassley wouldn't use the phrase for so long. Republicans are hypocrites. Vomit is all that comes from your mouth anyway.

Very sad to read about another death. Prayers for the family.

To the family of the lost individual to COVID-19, I am very sorry for your loss and hope that you find comfort/solace during your trying time. God Bless.

Amen. And to those families who wonder if their business will survive for the sake of their employees, I am very sorry for your unnecessary worry during the CCP virus and now the riots. God Bless.

unnecessary worry? That isn't placing much value on life and health.