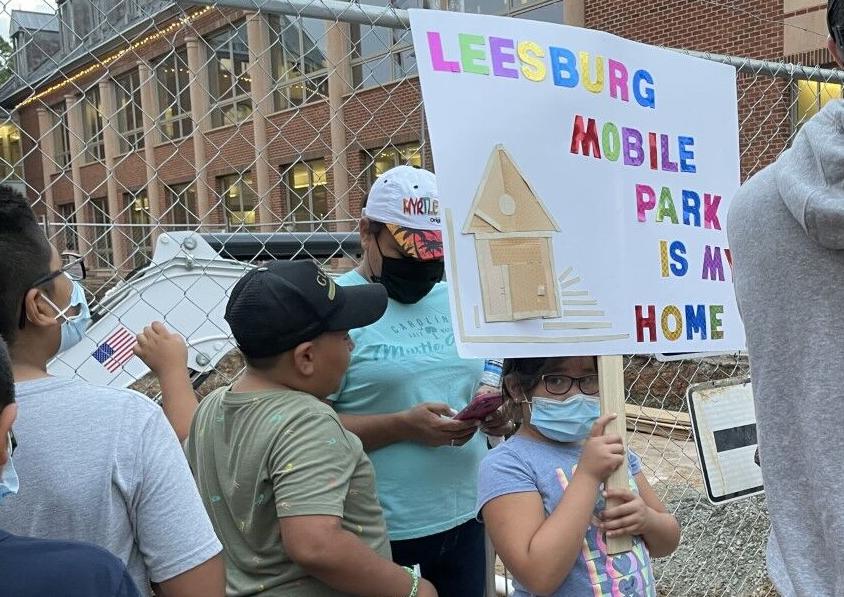 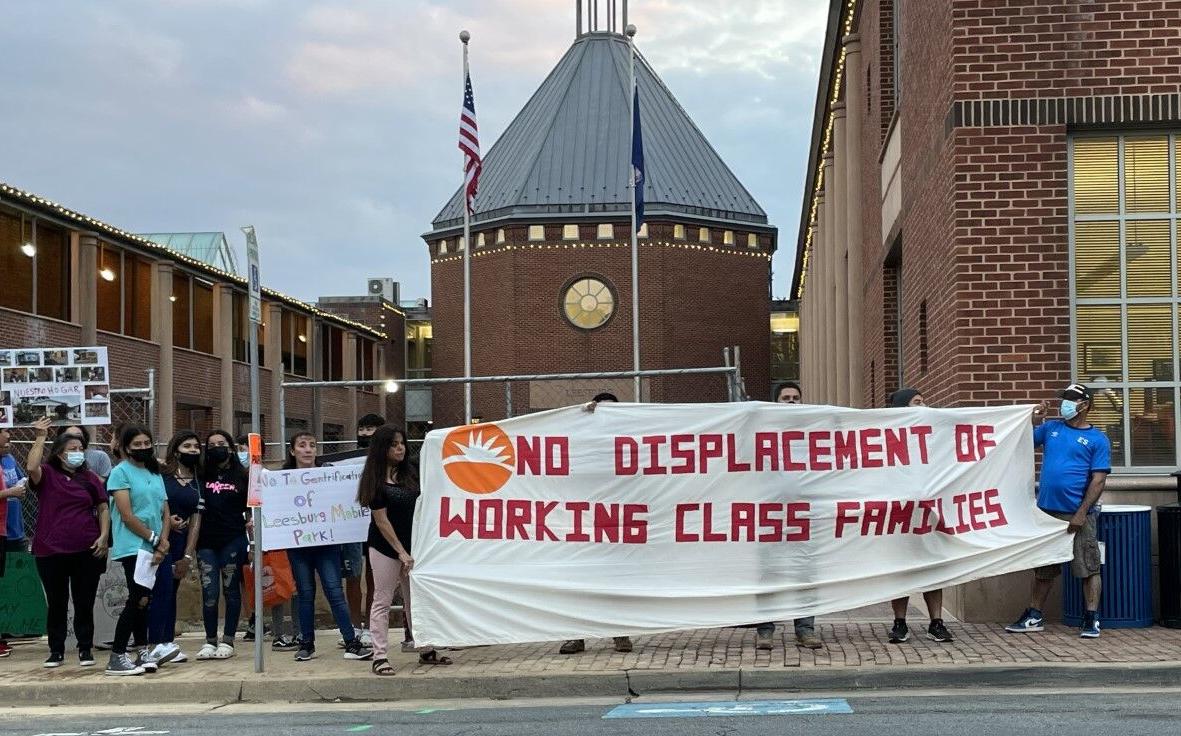 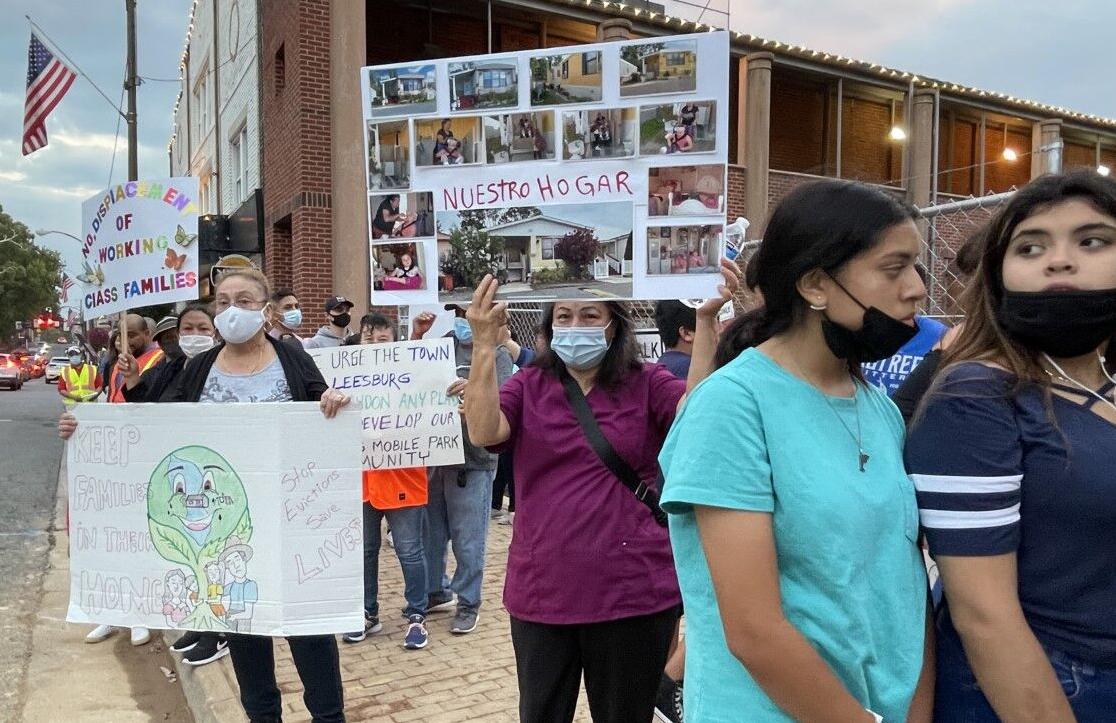 As the residents of Leesburg Mobile Park turned out in even greater force to lobby for the preservation of their community Tuesday night, Leesburg officials revealed the town has been meeting with the tentative buyer of the mobile home park, confirmed as Darius Saeidi, partner at DSP Real Estate Capital, located in Ashburn.

More than 50 residents of varying ages lined up in front of Leesburg Town Hall Sept. 28 for the Town Council meeting, chanting and waving posters with messages such as, “Please protect my trailer,” and “Stop evictions, save lives.” Many remained outside throughout the meeting.

The 17 residents who went inside for the meeting to address council spoke of the park’s affordable, tight-knit community, which they say is in jeopardy after property owner Carol Nuñez and property manager Carol Konkel sent residents a letter in August saying that the property was in negotiations to be sold for $11 million by the end of this year.

“We don’t know where to go, and we don’t have answers,” 10-year resident Cesar Chavez said. “We want to know what comes forward after this.”

So far, the current owner and Saeidi have not made public what might be in store for the property if the sale goes through. Konkel and Nuñez declined to comment on the matter when approached by the Times-Mirror. Saeidi has not returned a request for comment.

Operating under the name Crescent Mobile Partners LLC, Saeidi sent residents a letter dated Sept. 15 saying that the homes they own will be safe for at least another year after the sale closes. However, the email address he provided so residents could “receive emails with future updates” is not a working email address. When the Times-Mirror sent an email to the address, it returned with “address not found.”Saeidi, who has long dealt in Leesburg business, was previously employed by Bank of Clarke County and had a stint as president of the Historic Downtown Leesburg Association, according to Saeidi’s Linkedin account and a published newspaper letter.

Mayor Kelly Burk, who confirmed Saeidi’s identity as the potential buyer, told the Times-Mirror that he is still deciding what to do with the property.

“I would guess [he’s] not going to keep it as a trailer park,” Burk said.

Burk said the sale is legal, and according to current zoning, Saeidi has the right to get rid of the mobile home park.

Planning and Zoning Director Susan Berry-Hill told the Times-Mirror that the property was zoned as B-2, or business, more than 30 years ago. Mobile home parks are not a typical use for B-2, nor for its current zoning, Crescent District-High Residential.

However, since Leesburg Mobile Park pre-dates both zoning designations, it constitutes a “legal non-conforming use” that can continue to exist as long as owners don’t try to expand the property as a mobile home park, Berry-Hill said.

“I would argue that Leesburg is facing a gentrification crisis,” Piedmont Environmental Council field representative Julie Bolthouse told the council during the Sept. 28 meeting. “This is not inevitable. Please keep fighting for a solution.”

Burk agreed that labeling the current situation as gentrification is “probably accurate.”

“There are no easy answers,” she said. “It’s just hard to see the struggle of the people that have lived there … and your heart just aches. We are going to try to do as much as we can to encourage and help this developer to continue to have affordable housing there.”

Burk said that she is currently meeting with nonprofits and the county to create more opportunities for affordable housing in Leesburg.

One option, according to Berry-Hill, wouldn’t save the mobile home community but would provide similarly affordable housing in the area.

Staff will present a report to the council about potential actions the town can take at its Oct. 25 work session.

Meanwhile, residents of Leesburg Mobile Park continue to hope — and advocate — to keep their homes and community as they are.

“Our community has united,” resident Vicente Gonzalez said. “We’re fighting, and we want to stay here in Leesburg.”

“We are Leesburg as well,” he said.

I would like to know how many of these non profits Burk mentions receive money from any government entity? We donate to charity's of our choice and do not need government subsides for every project. Quit being Santa Claus with our taxpayer dollars, Burk!