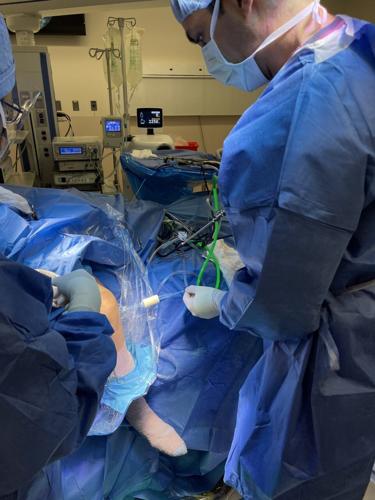 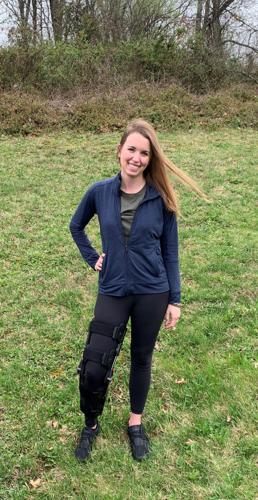 Andrea Cox had a new form of ACL surgery in February and is pleased with the results.

Andrea Cox had a new form of ACL surgery in February and is pleased with the results.

A new, less invasive procedure could provide new hope to the 250,000 Americans the CDC estimates tear their ACL each year.

“I’m personally excited about it,” said Dr. Rahman Kandil, a Loudoun County-based orthopedic surgeon who is the first in the Washington, D.C., area to perform the new surgery.

Kandil said the current treatment for a torn anterior cruciate ligament, or ACL, is to harvest a graft from a patient which is then used to reconstruct the ACL. The torn ACL is removed and reconstructed with a new tendon. There are potential issues with the surgery which can lead to complications due to the fact that the area where the graft was taken can be weakened, he said.

This new procedure — which is offered at Inova Loudoun Hospital in Lansdowne — uses a technology called the BEAR Implant, Kandil said.

This implant is approved by the U.S. Food and Drug Administration (FDA) and it allows the body to heal its own ACL, he said.

It is less invasive with a smaller incision and does not require a second surgical wound site to remove a healthy tendon from another part of the leg, or the use of a donor tendon, he said.

“Instead of harvesting your own tissue to reconstruct the graft, we reattach the ligament to the insertion point,” Kandil said.

The implant then acts as a bridge to help ends of the torn ACL heal together. As the ACL heals, the BEAR Implant is reabsorbed by the body, within approximately eight weeks, Kandil said.

The first local surgery using this new process was completed Feb. 2 on Andrea Cox, a 31-year-old Loudoun County resident and a teacher at Heritage High School.

Kandil said he was very pleased with the result of the surgery and hopes to launch this on a larger scale.

“She is doing excellent. She had less pain than the average patient and her recovery process has not been as challenging,” Kandil said. “However, just like any ACL surgery, the recovery is long and usually we say six to nine months to begin sports.”

Clinical studies have demonstrated that the BEAR Implant restores torn ACL quality and size similar to a patient’s non-injured ACL, Kandil said. It also has shown faster recovery of muscle strength and higher patient satisfaction with regard to readiness to return to sport, he said.

Cox said the injury occurred in December when she fell while skiing. She had an MRI in January which showed a small fracture on the side of the tibia, a torn ACL and sprained ligaments.

Dr. Kandil told her that she “definitely needed surgery” and laid out the options. She decided to try the new procedure because it showed promising results, she said.

As a mother of a toddler, juggling the recovery process with a knee brace and crutches has been tough, but she has worked through it.

Two months later, she is in physical therapy two times a week and she is happy with the results, however she knows it will be months before she reaches full recovery.

“Everything is going according to plan and I’m ready to get back to hiking, but trying to take it slow,” she said.