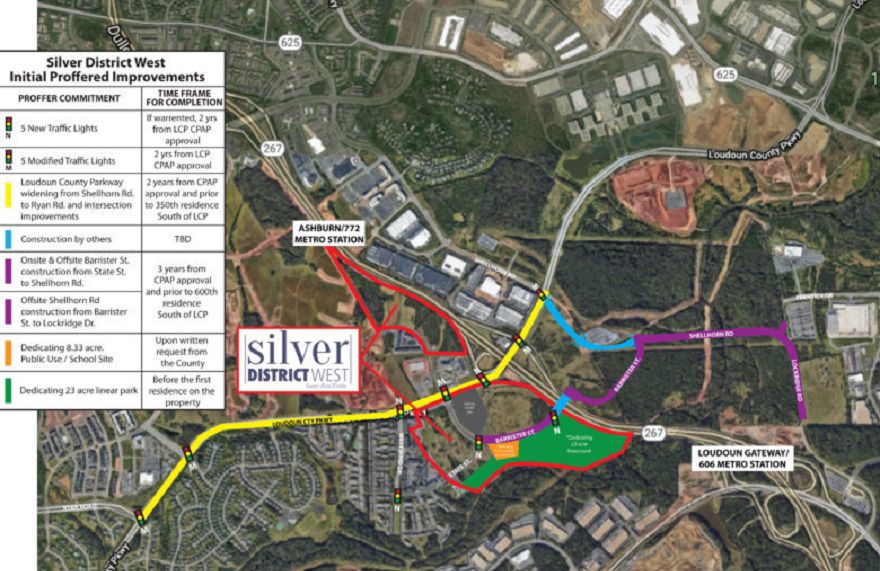 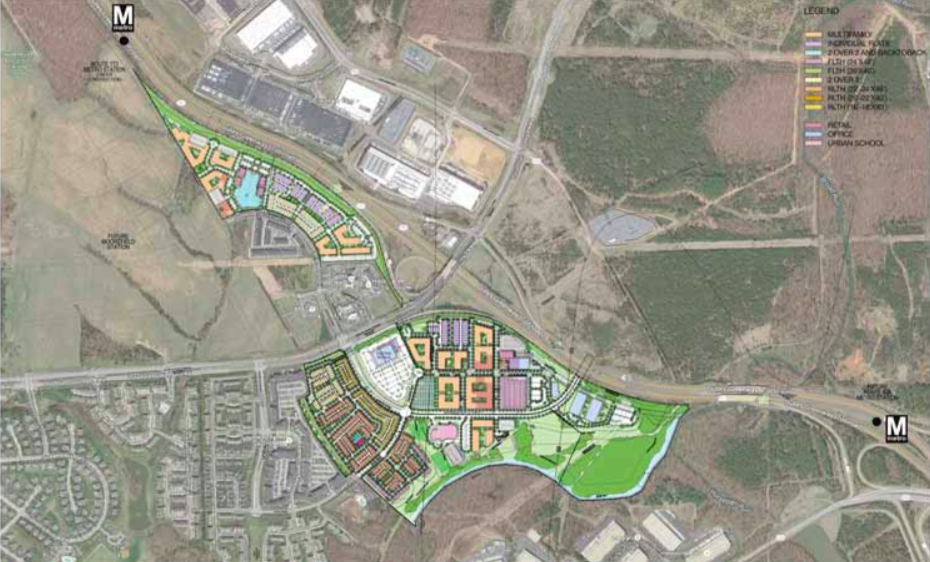 The Loudoun County Board of Supervisors on Sept. 3 approved a key piece of developing another east-west alternative to the Dulles Greenway.

Approved unanimously on the consent agenda, the board agreed to purchase 24.9 acres of land from Sentinel Data Centers to construct multiple roads and streets that will offer commuters an alternative to the 14-mile Dulles Greenway, according to Supervisor Ron Meyer (R-Broad Run)

As part of the agreement with SDC Ashburn I, LLC (Sentinel Data Centers), the board agreed to pay $17.7 million toward constructing Shellhorn Road, Barrister Street, Prentice Drive, and Lockridge Road.

In March, SA Associates South, LLC—the company behind the Silver District West project—agreed to construct some of the roadways as part of its 158-acre mixed-use community plan.

“Last night, the Loudoun board voted 9-0 to authorize the county to finalize the land acquisition for the largest portion of land needed to begin construction on the Shellhorn Road extension to Route 28,” Meyer said in a prepared statement.

In April 2018, conversations between the data center company and Loudoun County officials began with an aim for the county to acquire the land needed for construction of the extensions and improvements to the roadways across from the company’s property.

Sentinel Data Centers still owns more than 200 acres after purchasing the property from the Antigone-Taustin family for $82.5 million.

Meyer said the section of Shellhorn Road that was agreed to under the purchase stretches from near the Dominion substation along Loudoun County Parkway to the Loudoun Gateway Metro Station, which is directly parallel to the Greenway.

“Many in the past, like when I ran on this project in 2015, claimed this road could never be built because this section of land could not be acquired. Well, we negotiated for it and acquired it, without using eminent domain. Thank you to those in county staff and in my office who helped make it happen,” Meyer said.

The Silver District West project, a 158-acre mixed-use community development, will be located south and west of the Dulles Greenway at Loudoun County Parkway. Developed by Soave Enterprises, the project includes up to 3,706 residences and more than 1 million square feet of non-residential uses.

The developers proffered land for a new elementary school and public park use, as well as construction of area regional roads. The transportation proffers are expected to save the county an estimated $84.5 million.

The project also includes a provision for a bridge to be built across the Dulles Greenway that TRIP II, owners of the Greenway, will be responsible for constructing.

Why don't they put an easy access bike/pedestrian path from the development to the metro? It may solve some of the congestion problem.

MRV52 . Thanks for the challenge. I have already investigated it with some ideas on how to fix it or at least make it more palatable for Loudoun residents who need to use it. The owners are indeed quite focused on how to protect their interests as they bought it for a bit over $600 million a couple of years ago and refinanced it for over a $billion. In this way any buyout would have to absorb the debt (this operates like a poison pill) and they fought a lawsuit on assessments which I believe a well constructed discounted cash flow analysis will show they are SEVERELY under-assessed. So Loudoun wither charges them the added $50 million per year in property taxes or negotiates a discounted rate for Loudoun commuters or both to differing degrees but letting this BS continue would not be the case if I am setting the agenda for the BOS.

It’s hard to see in the fine print but all of the proffered roads that need to be built have stipulations. One says must be constructed before the 350th unit is constructed. The second says before the 600th. Yeah whatever relief they are projecting for traffic is a joke. 600 more units in that development alone along with the new lights. Sounds like the developers are laughing all the way to the bank.

BobOhneiserEsq, you want to do something that will get my vote? Take on the mafia organization that runs the greenway.

I miss how this is an alternative to Greenway? Looks more like Loudoun County Parkway adds 5-10 more lights so those travelling that road can sit longer in traffic. What's next, Loudoun BOS to pay the metro bill for the few using metro from Loudoun? Curious if those parking garages are free? All others cost big $$$ to park.

GOTCHA!, says the law of unintended consequences. I used to like the idea of a Greenway alternative as a way to give my middle finger to its owners. I was wrong.

Adding four more east-west lanes and probably seeing lower Greenway fares will just make it easier for outsiders to move into Loudoun. Our residents don't want more growth, which is just what a new road would bring.

They have been against growth as long as I have been in Loudoun. But there are jobs, lot of new companies that are hiring.here and more people born every day, so what would the answer be?

In other news, concrete at new metro stops from Reston to Ashburn are years away from being signed off. Instead of rebuilding, they're spraying, which isn't holding. Metro will sit empty for another 5 years. Our corrupt BOS voting for Metro and more development.

DavisB, What failures? Instead of trying to be insulting on a public bulletin board tell us who you prefer and why. Tell us what part of what I posted you disagree with and why. Just throwing stones is so 2000 years ago isn't it? Do you really think our commuters are treated fairly as they pay the same fare as out of staters while Loudoun subsidizes the transportation Do you really think Loudoun taxpayers are treated fairly when they pay 100% of their market value times the tax rate when Chairperson Randall voted to continue exempting Howard Hughes Medical Center from paying anything? Do you really think VDOT should be able to NOT take care of roads it is responsible for making Loudoun taxpayers pick up the difference? Do you like paying 33% higher property taxes than the rest of the state? Both my opponents have lost elections and neither one ever won an election with the majority of votes cast. Those are the facts.

There will be 15 traffic lights from Brambleton town center to the greenway once they widen loudoun county parkway. This parallel road they are proposing will probably have 5 more lights. Guess you have to weigh the options. 30 minutes to go 3 miles during rush hour with all the traffic lights. Or pay the 9 bucks on the greenway. This will just push the choke point to 606 and 28. Only issue I have with the greenway is they still have the toll gates. Get rid of them. No mention of the middle school and high school that will need to be built when this development is complete. Guess only elementary age kids can live there.

Every one of the current BOS who voted for this development needs to be replaced in the next election. Who in the world is going to educate these children? Where are you getting the teachers from? No one goes to college to be teachers anymore! You are committing suicide by approving over 3000 residences. Morons...all of the BOS! And the BOS who approved for Metro to extend into Loudoun should be hung up to dry in the sun. Traffic, education, police and fire...all they saw was developers waving dollars in front of them with no regard to the effects.

Even if Loudoun BOS finds an alternative to the Greenway it still should properly assess the Greenway owners for the market value of their land just as it does for the homeowners in Ashburn and elsewhere. You can't assess a business whose income literally comes from the land it has in Loudoun $242 Million when it has between $140 million and $400 million per year over the next 4 years. The owners bought the Greenway for over $600 million and refinanced it for over a $billion. It is even more insulting to Loudoun commuters who pay the full fare as a West Virginia resident would even though our BOS somehow agreed to subsidize this road venture. Fairness in taxation is critical to a civilized society or its is just a taking. What will the new connection cost Loudoun taxpayers? Will West Virginia and Maryland drivers get to use it for free too? Is VDOT covering some of the cost? More disclosure would be nice. Vote for an independent chair on Nov 5th.

I have to agree even though this is probably one of his shortest posts.

Bob - sounds similar to the Marc train discontinuing service to WV unless WV starts paying its share for the maintenance.