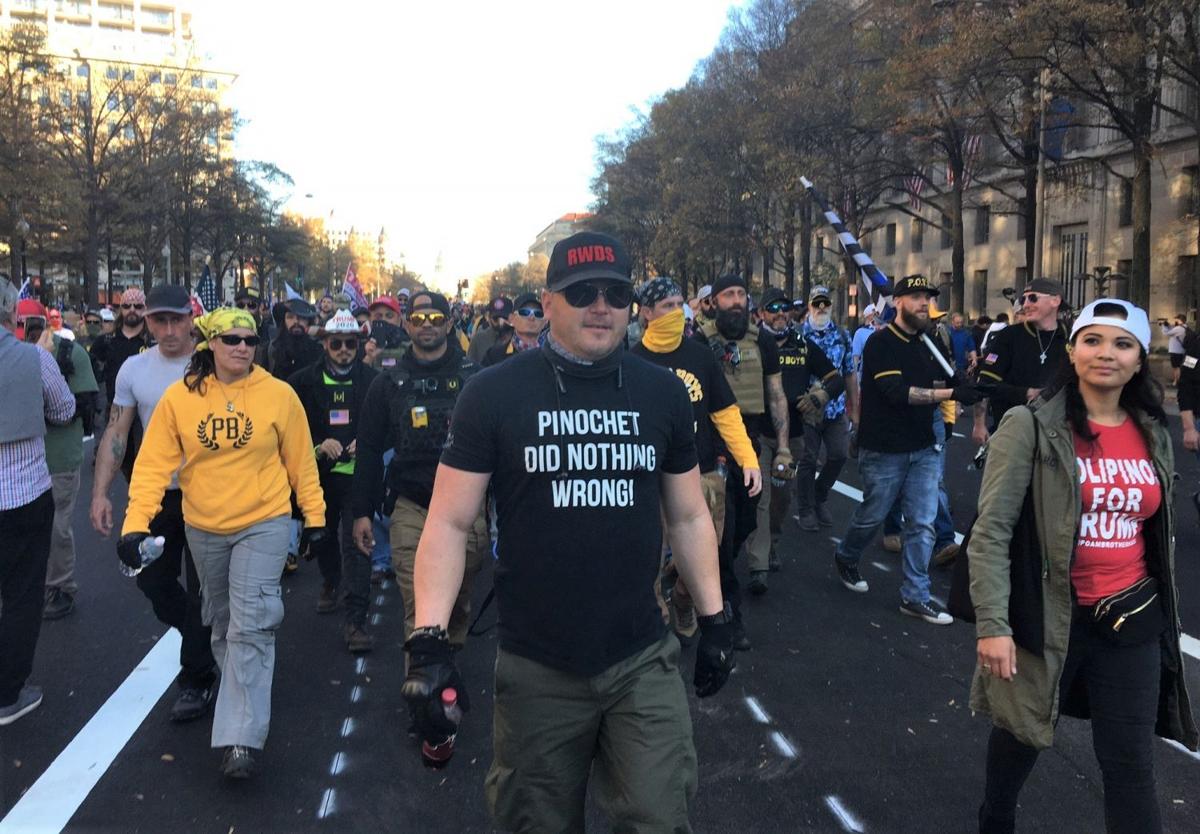 Members of the Proud Boys group and other supporters of President Donald Trump march on Pennsylvania Ave. in Washington, D.C., on Nov. 14, 2020, to protest what they claim was fraud in the November 2020 presidential election. 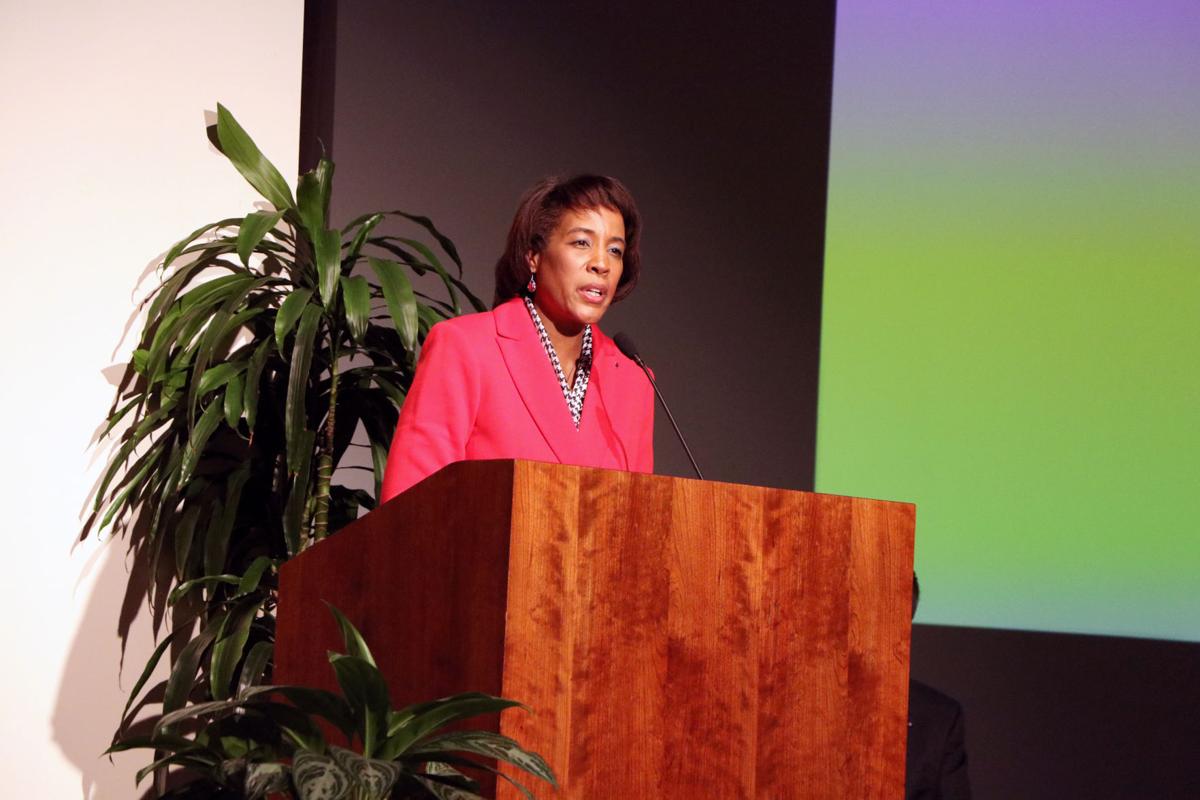 Chairwoman Phyllis Randall (D-At Large) spoke on Jan. 5, 2020 at the Loudoun County Board of Supervisors' Ceremonial Installation at The National Center.

Members of the Proud Boys group and other supporters of President Donald Trump march on Pennsylvania Ave. in Washington, D.C., on Nov. 14, 2020, to protest what they claim was fraud in the November 2020 presidential election.

Chairwoman Phyllis Randall (D-At Large) spoke on Jan. 5, 2020 at the Loudoun County Board of Supervisors' Ceremonial Installation at The National Center.

Loudoun County Board of Supervisors Chairwoman Phyllis Randall is joining regional leaders who are urging people to avoid counter-protesting Wednesday in the nation’s capital amid claims of fraudulent election practices made by President Donald Trump.

The president promised a “wild” protest on Wednesday in a recent tweet as he continues to claim widespread fraudulent election practices while challenging Joe Biden and Kamala Harris winning the presidency and vice presidency.

Regional officials are concerned demonstrations will lead to more violence and put a strain on law enforcement.

“In the face of organizations that are more than willing — and in fact eager — to engage in violent acts, counter-protestors can only serve to inflame an already dangerous situation," Randall (D-At Large) said in a prepared statement.

Randall has appeared in a number of demonstrations locally including the “I Can’t Breathe” march on May 31 attracting more than 1,500 people marching in honor of George Floyd, a Black man who died at the hands of a Minneapolis police officer on May 25.

The protest, put on by Citizens for a Better Leesburg, ended with no incidents as supporters marched around Leesburg and ended at the county courthouse. At the time, the Centers for Disease Control and Prevention and local health departments were recommending people stay home. Most demonstrators wore personal face masks.

Geary Higgins, chairman of the 10th Congressional District Republican Committee, said everyone should be concerned about the safety of residents, but also respect each other’s First Amendment rights.

“Thousands of normal everyday supporters of the president and their families are choosing to rally and exercise their First Amendment right on Wednesday and don't need to be told by a couple of regional leaders to stay home," Higgins said. “In Loudoun County alone over 82,000 citizens supported the president. Their views need to be respected as well.”

Sharon Sadler, chairwoman of the Loudoun County Republican Committee, said she appreciates Randall’s concern for the safety of residents. But she found the references made by Washington, D.C., Mayor Muriel Bowser (D) and Randall about people attending the protest rallies to be insulting.

She said voters who are concerned about election integrity and gather in peaceful demonstration are not "seeking confrontation" and are not part of "extremist groups" or "fringe groups" who are eager "to engage in violent acts."

"These phrases impugn the motives of millions of Americans just because of political disagreement,” Sadler said. “I hope that those who want to make a point by harming others or destroying property stay home because the average conservative protestor isn't the problem. Time and time again, conservative gatherers demonstrate how to demonstrate peacefully and respectfully, and I hope that Jan. 6 is no different."

On Monday, Enrique Tarrio, leader of the far-right Proud Boys and a supporter of Trump, was reportedly arrested in D.C. and is facing misdemeanor destruction of property charges in relation to him saying he burned a Black Lives Matter flag that was stolen from a Black church in December during a protest in the District.

According to the New York Times, during his arrest Tarrio was also “found to be in possession of two high-capacity firearm magazines,” which are illegal in D.C., and was “charged accordingly with possession.“

Also on Monday, the Lawyers’ Committee for Civil Rights Under Law announced a lawsuit filed in D.C. Superior Court against the Proud Boys The lawsuit was brought on behalf of the Metropolitan African Methodist Episcopal Church, a historic Black church, in response to the burning of one of the church's Black Lives Matter banners.

The National Guard reportedly will be deploying hundreds of troops to the nation's capital on Tuesday and Wednesday.

Across the country, Republicans, including those in Congress, are split on backing the president’s claims.

Trump’s legal team has already faced a number of states certifying the elections as valid including Virginia and courts dismissing the claims.

The chairwoman said she understands the desire to show support for the elections process, democracy and the Constitution. She added that it’s her responsibility to keep her constituents safe.

This woman needs to be voted out at the next election cycle. She is willing to march in BLM protests, is totally mum about the rioting that went on due to Antifa but is all too quick to criticize peaceful protest by law abiding citizens. She would have more credibility if she ever admonished the rioting, looting, and property damage done by her allies on the left.

Make sure your peaceful march goes by the mayor's house!