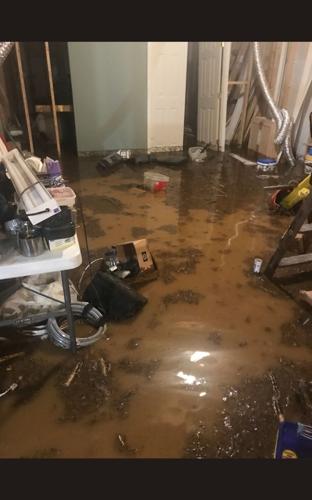 Andrijana and Ronald S. Brown’s basement at 15731 Trongate Court in Leesburg after a flood in 2018. 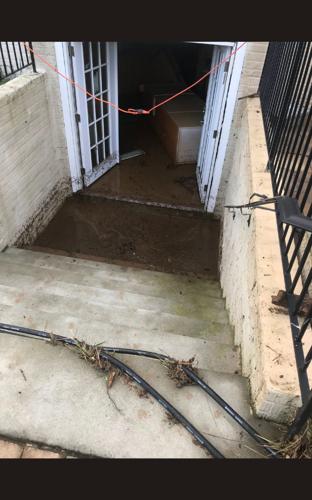 The outside of the basement of Andrijana and Ronald S. Brown’s home at 15731 Trongate Court in Leesburg after a flood on Aug. 21, 2018. The couple are suing the Loudoun County Board of Supervisors, the county and county official Gary Clare for $3.3 million alleging fraud and negligence.

Andrijana and Ronald S. Brown’s basement at 15731 Trongate Court in Leesburg after a flood in 2018.

The outside of the basement of Andrijana and Ronald S. Brown’s home at 15731 Trongate Court in Leesburg after a flood on Aug. 21, 2018. The couple are suing the Loudoun County Board of Supervisors, the county and county official Gary Clare for $3.3 million alleging fraud and negligence.

A couple whose basement was flooded in 2018 allege a county official allowed a berm to be placed by their Leesburg home despite being warned it put their home at risk of flooding. However, the county’s spokesman said the accusation is “unfounded.”

In a $3.3 million lawsuit filed on Aug. 4 in Loudoun Circuit Court, attorney Timothy P. Bosson wrote that Gary Clare, director of land engineering in the Department of Building and Development, covered up concerns a colleague expressed about the berm. Bosson said the 8-foot berm was placed next to 15731 Trongate Court, the home of plaintiffs Andrijana and Ronald S. Brown, in 2016. The home is in the Selma Estates neighborhood just east of Catoctin Ridge which slopes downward towards the neighborhood.

In 2015, the homes immediately north of the Brown’s home flooded, but their home was spared. Bosson said Clare assured residents after the flood that they’d experienced a 200-year storm and “act of God” that was unlikely to occur again in their lifetimes. But Bosson said depositions from a lawsuit filed by the Brown’s next door neighbors Chad and Jill West against Stanley Martin Homes, which built the homes, and Christopher Consultants Limited, a civil engineering firm that worked with Stanley Martin, told a different story.

In the depositions, county employee Robert Balinger, who Bosson said reported directly to Clare, said he warned Clare there was a risk of more flooding because the flood plain easement was faulty.

“He astutely noted to Mr. Clare that to correct the problem, the proper fix would be to ‘keep the stream in the stream’ and that the berm being built behind the homes was an improper fix,” Bosson wrote. “Clare, who was very friendly with representatives of SMH and CCL, blew off Balinger and instead said they should just let the financially biased SMH ‘try a fix and see if it works.’ Mr. Clare proceeded to bury Mr. Balinger’s findings and never raised the issue again. In all communications with Trongate neighbors, Mr. Clare conspicuously concealed the concerns with the flood plain easement.”

Besides Clare, the county and the Board of Supervisors are being sued. In an email on Wednesday, Glen Barbour, county spokesman, said the county doesn’t try cases in the media. “I can tell you that the claim is unfounded, and should a lawsuit go forward, the Office of the County Attorney will address the matter as appropriate,” he said.

Bosson said the flooding, which occurred on Aug. 21, 2018, destroyed the Browns’ basement causing thousands of dollars of damage. Water also filled their yard and the surrounding cul-de-sac preventing them from entering and exiting their home.

Bosson said Selma Estate neighbors got the Federal Emergency Management Agency to conduct a study in 2019 and it showed the Brown’s home is in a 100-year floodplain. He said a separate study by the county published in 2019 was more damning. “[It] made clear that the berm dangerously gathered the floodplain’s waters behind the Brown’s home placing the home in the middle of an emergency spillway and was the direct cause of the 2018 flood of the Brown’s home,” Bosson wrote.

Bosson said the Browns had no idea when they bought their home in 2013 that it was near a floodplain. The total taxable value of the property is $726,000, according to county property records, but Bosson wrote it is “wholly worthless” because of flooding dangers.

Bosson wrote that info from the West’s litigation showed the county required no engineering designs, plans, or permits for the berm which was built by Stanley Martin. The suit seeks to lower the berm to reduce flooding concerns and accuses Clare of fraud and negligence.

“Clare was motivated by his cozy relationship with the developer and engineer and his failure to protect the Trongate neighbors was unconscionable,” said Bosson, adding that that Jill West’s elderly, deaf mother had to be rescued from the West’s basement during the 2018 flood. “These breaches of duty involved reckless disregard for danger to human life and property and therefore constitutes gross negligence.”

Bosson said in an interview on Thursday that lawsuit was a last resort after continual assurances from county officials that they would resolve the problem. He said the suit was triggered by a recent county offer of $25,000 in exchange for not being sued.

“We said, ‘That’s too low and they said, ‘Sue us,’ in so many words,’” Bosson said. “They strung my clients along and that’s what really ticked them off. They thought they were going to do right and they didn’t.”

There are so many instances of county staff facilitating developer interests. If we could only follow the money.