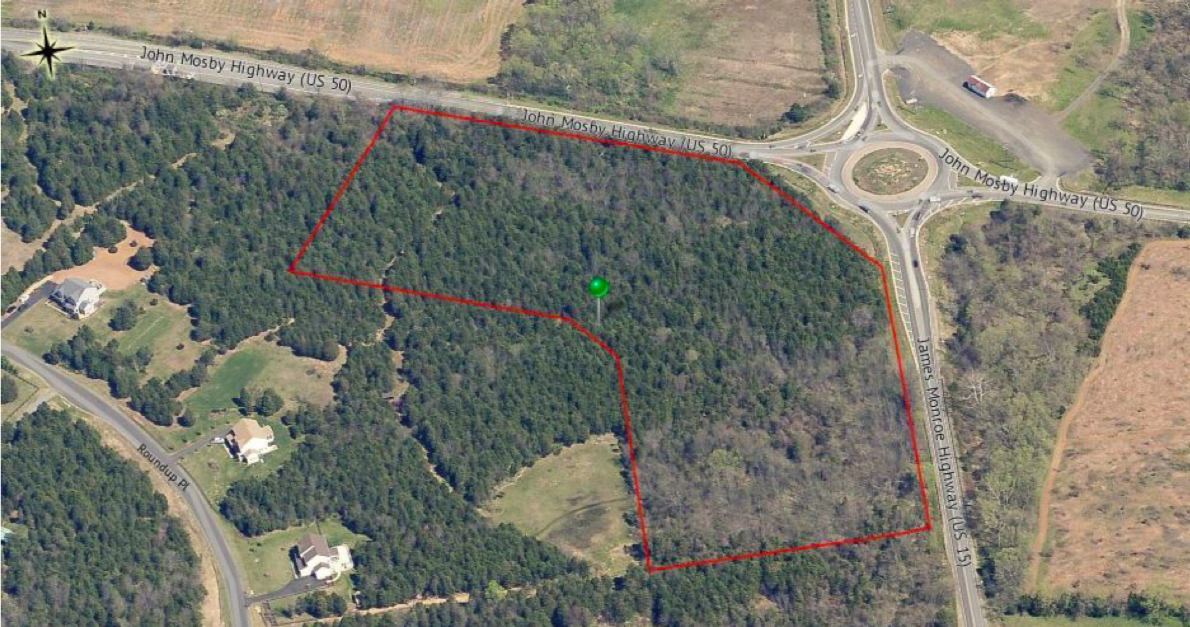 On June 20, the Loudoun County Board of Supervisors voted to purchase an alternate property for a future fire and rescue station in Aldie. The new property subject to purchase is at the southwest corner of John Mosby and James Monroe highways, as shown above. 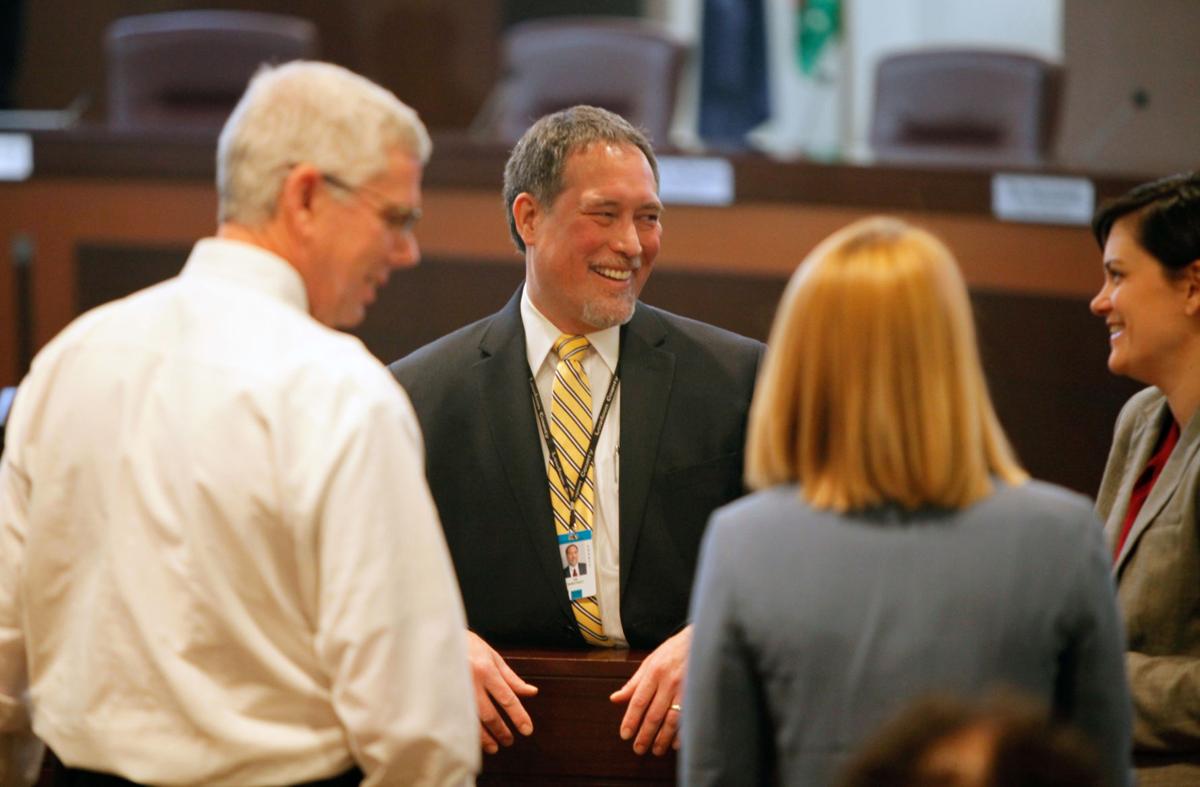 After Loudoun County officials spent years searching for a site for the new Aldie fire station with little to no luck, it came as something of a surprise last month when the Board of Supervisors moved swiftly to acquire property near Gilbert’s Corner with the intent to locate the new station there.

Faced with the dilemma that the Aldie fire and rescue station could only go in one place in historic Aldie – much to the chagrin of Aldie citizens – the board moved June 20 to secure the 11.7-acre alternate site that became available two weeks after delaying a vote on the old Aldie property.

“We finally found a willing seller for this project in an area that the community, I think at least on the surface, is supportive of,” Hemstreet said.

Supervisor Tony Buffington (R), who represents Aldie and the Blue Ridge District, said he was pleased when the county and property owner reached a deal.

“There was actually quite some time between initial discussions and the agreement," Buffington said. “However, the final negotiations and agreement, pending a 120-day due diligence period, did progress quickly between June 10 and 20.”

With a motion to enter into an agreement, Buffington’s peers voted unanimously on June 20 to purchase the alternative property for $875,000. The land is assessed at $290,400, according to county records. It sits by Gilbert’s Corner at the southwest corner of John Mosby Highway and James Monroe Highway in Aldie.

The deal, which is contingent upon successful completion of the purchase and a 120-day due diligence period, would be the first of many steps in finalizing a new site for the fire and rescue station outside the Village of Aldie.

County Attorney Leo Rogers said the 120-day due diligence period is an opportunity for county officials to see if the property works for the mission of fire and rescue staff.

“The most important thing is that the fire station is in a location that it adequately serves the community,” Rogers said. “You can find a location for the fire station that’s off a main road or isn’t close to the population it’s serving, but that’s not going to work. So, we had a small area in which to look, contacted the property owners, and then some responded, ‘Yeah, we’re willing to talk,’ and then this one we were able to strike a deal with.”

Buffington said with the support of county staff several meetings were held with property owners throughout 2018.

“I’m not sure what changed in [the subject property owner’s] life, but they were more willing to have the discussion this time,” Randall said. “It did happen fast in saying, ‘yes,’ but they had been approached about it before.”

Randall went on to praise Hemstreet, the county administrator, for brokering the deal between the property owners.

“Mr. Hemstreet is incredible in almost everything that happens good on this board and in this county," Randall said. “They didn’t want to sell the first time, and the second time he was a part of the discussions. He is very devoted, very smart and has the county’s best interest at heart while still caring about the constituents in the county.”

The board is still considering the previous option. It voted to defer a decision on construction of the 20,000-square-foot station in historic Aldie until November.

The original site, which includes three parcels, is located on the south side of Route 50 in the Village of Aldie located within the county-designated Aldie Historic District.

In June, the board directed county staff to file a zoning map amendment application to remove a portion of the land proposed for the fire station from the Aldie Historic and Cultural Conservation District.

The existing station in Aldie proper, built in 1971, is approximately 6,000 square feet and lacks the programmatic and functional space to support and accommodate assign staff providing 24-hour emergency service delivery to the Aldie community and the surrounding response areas, according to a county report. The existing station is also located in a major floodplain, and flooding has forced the evacuation of staff and emergency apparatus, disrupting emergency service delivery more than 20 times since being built.

Staff members at the station sent the board multiple letters describing the conditions of the current station. Some testified to being diagnosed with bronchitis, been bitten by spiders, found rodents, snakes, and dealt with occasional flooding and overwhelming structural damage.

The debated project was originally estimated to cost nearly $19 million.

Considering the alternate property would help to preserve the village, Aldie Heritage Association Board Member Guy Gerachis said he is keeping his fingers crossed the deal will favor fire and rescue.

"I think with this new site, it's going to satisfy everybody," Gerachis said. "It'll be big enough so that the fire department gets the building they need and it's out of the historic village, and I think the property is large enough for future expansion if they need to."

He added, "A lot of people stretched hard to make this happen, and now we'll be able to say that we have three historic buildings in the village and kept the character of the village like it should be."

Follow the campaign contributions. See who the owner/owners of the property are and how much their family and friends have contributed to the various members of the BOS and you may get some answers.

If it is worth a million and was only taxed at 290k was there a shady bit of business involved?

That is a prime location easily worth over million dollars.

And all of a sudden it became available tho they say " discussions were ongoing"...more shell games from the realtor-owned BOS. This nonsense is becoming very tedious. And Aldie, those 3 "historic" buildings are fire and rat traps. Sell or lease for$1 to an entity that will at least bring them up to code.

Explain why we are paying over 500 thousand dollars more then assessed value, please?

Because its really worth 1 million or more more than the assessment.

So you think that the County paid BELOW market value for this property?

Because Loudoun county gimme all your ding dong money.