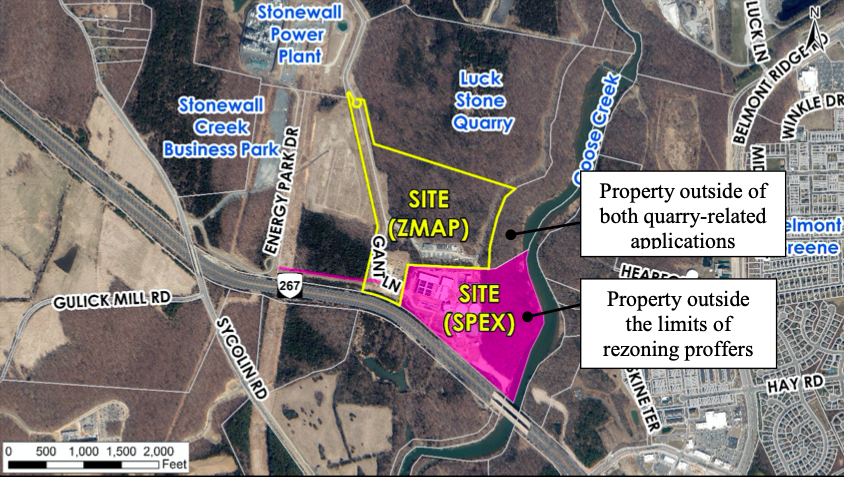 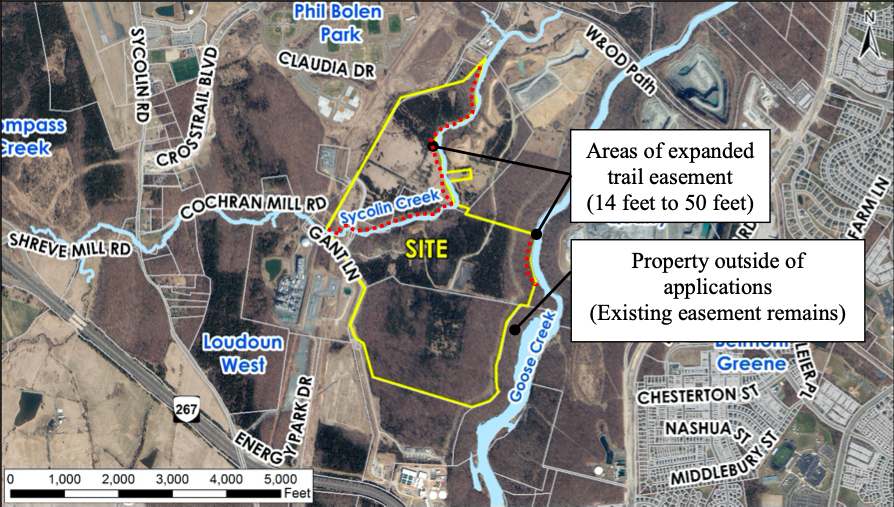 The Board of Supervisors on Tuesday unanimously approved Luck Stone Corporation’s plans to rezone more than 60 acres near Leesburg from quarrying uses to allow data center development.

As part of the approval, the 61 acres was rezoned from the Mineral Resource–Heavy Industry zoning district to Planned Development–General Industry.

The site is located along the north side of the Dulles Greenway between Goose Creek and Gant Lane/Cochran Mill Road. It extends north for approximately 1.5 miles.

The board also voted on plans to expand the limits of previously approved quarry uses to include a 27-acre expansion of quarry pit limits and a 46-acre expansion of overburden uses along the western boundary of the existing Luck Stone quarry property.

A 13-acre reduction in the quarry limits is expected along the southern boundary of the property.

Luck Stone is proffering improvements to Sycolin Road, and the applicant included an expanded public access easement from 14 to 50 feet along the frontage on Goose Creek and at the west bank of Sycolin Creek.

In 2011, the board approved Luck Stone West Quarry's plans to rezone 168 acres from the Transitional Residential zoning district to the Mineral Resource–Heavy Industry zoning district.

Supervisors did not offer any comments on Tuesday before approving the rezoning.

Commercial property is a revenue asset whereas residential is a loss.

I don't know about the money being funneled up, it goes to the county in taxes. I agree with you on the housing. Loudoun needs housing that people can afford. Neither of my kids could afford to live in Loudoun. 1 moved out of state and the other to Fairfax county.

I'd rather have data centers with 3 employees looking at blinking lights than 100,000 homes that need schools, roads, services, etc...

Amen. I was worried about this board widening Sycolin and making this a sprawling workforce housing development. The people upset that it’s not a park need to be more realistic

"Realistic" is how everything nice get compromised away. Why cant we have parks? Because they dont make money for someone? This is the sickness of capitalism...

I totally agree. The buildings aren't pretty, but they don't add much to the traffic congestion.

agreed. What a way to loose the countryside.

At least a neighborhood has community.

It's better than more housing.

How about parks, or open space, or any number of uses other than houses. You're falling for a false choice pushed by development interests and the politicians they manage. It just insures we get nothing to improve the quality of life in Loudoun.

The Board(specifically Buffington) denied a recreational park in Aldie when he promised the applicant for two years that he was going to pass it, at the last minute he switched his position because one of his big donors wanted the land for data centers. The county folks do not care too much about quality of life or eye sores, it's all about the Benjamins!

Because the government doesn't own the land. And the people that do own it want to sell it or develop it for a return on their investment.

You always have the option of buying land yourself and turning it into a park.

I'd prefer that too. But realistically it is going to be developed and data centers are the lesser of the two evils. Cash positive data centers or money sucking, infrastructure congesting housing. No contest.

Loudounclear, that would be great. The problem is that they cost for maintenance and the data centers pay taxes. I would love to see more nature in this part of Loudoun.