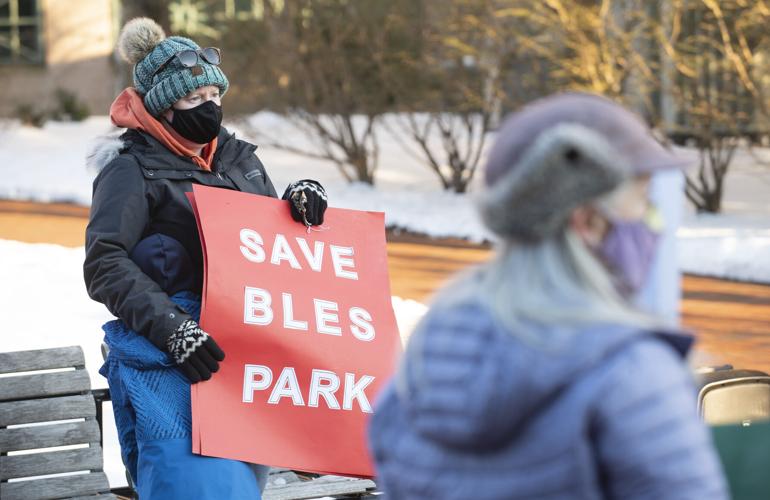 Karen Hoffman, along with her son John, 7, take part in a rally Tuesday afternoon prior to the Board of Supervisors' meeting. The board is considering a series of proposals for Bles Park. 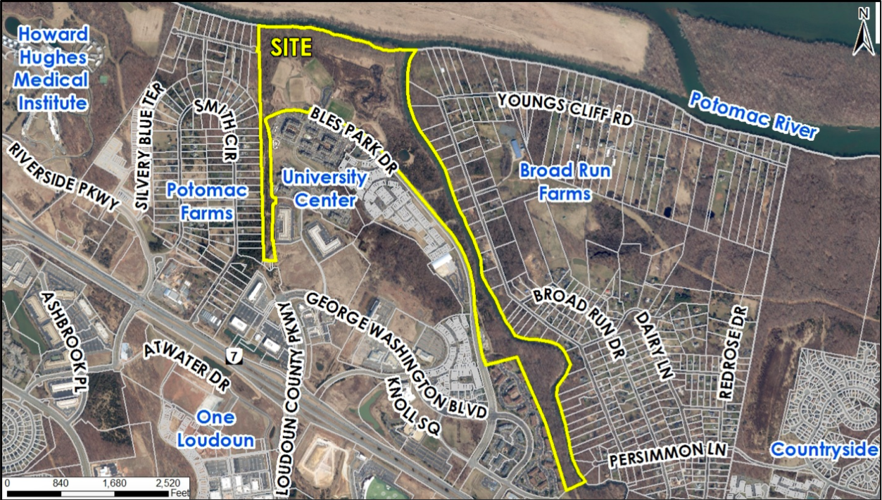 An aerial map of Bles Park expansion project proposed by the Loudoun County Department of Transportation and Capital Infrastructure.

The Loudoun County Board of Supervisors on Tuesday approved planned enhancements to Bles Park that are designed to improve safety and access and provide additional recreational opportunities for residents while maintaining the park’s natural attributes, according to a Jan. 19 release.

The 132-acre park is located north of Route 7 in Loudoun’s Algonkian District and is adjacent to the Potomac River. It includes a portion of the Potomac Heritage National Scenic Trail. The Eastern Loudoun Adult Day Center is also located on the property, which also currently includes four sports fields, paved and natural trails, wetlands/natural areas, a playground and limited parking.

Over the last year, the county has modified plans for the park, based on community input, the Jan. 19 release states. The revised plan represents the minimum necessary to provide the required parking and facility upgrades to meet the needs of park users, while limiting the effects on the natural habitat, officials said.

“The new amenities, most of which will be built next to existing recreational uses, will further help aggregate the park’s active recreation near the park entrance and leave the natural areas much as they are,” said Supervisor Juli E. Briskman (D-Algonkian) in a prepared statement.

“This is not development in the traditional sense, and it is not an expansion," she said. "It improves safety and access, and provides amenities the Algonkian community has been requesting for years, such as a dog park and more pickleball courts. I am proud that we are finally building them, and I know Bles Park will continue to be an eastern Loudoun gem that families can enjoy for years to come.”

During the board’s Jan. 18 business meeting, the board approved a legislative application that would allow the planned improvements to move forward. The phase 1 plan includes the following improvements and amenities:

The plan will provide access to the park’s new canoe and kayak launch via an existing gravel drive, which will also allow public safety vehicles to access the launch area in case of emergency.

The board also approved a future phase 2 proposal, which currently is not funded. The phase 2 plan includes the following improvements and amenities:

The various park improvements will enhance the safety and accessibility of the park as well as the recreation opportunities by means of inter-connected open spaces that provide diverse activities for all ages, interests and abilities, the Jan. 19 release states. The Loudoun County 2019 Comprehensive Plan encourages the development of such spaces in eastern Loudoun.

County officials said "the thorough scrutiny given to the plan by the Board, the Planning Commission and county staff assure that the natural setting of the non-developed sections of the park will be maintained and that the adopted enhancements reflect the best possible options for a park that was built nearly 30 years ago with both active and passive recreation opportunities in mind."

There is no larger or divisive force when it comes to separating people from nature than the Loudoun County Board of Supervisors! Chair Randall, Supervisor Briskman, Buffington, Kershner, Umstaddt, Saines, Letourneau, Glass and Turner should be on a Most Wanted list for crimes against the environment which are crimes against humanity!

Sad to say the Board of Supervisors led by Juli Briskman voted to add three football fields of impervious surface to Bles Park with the option to come back and pave even more for a boardwalk next to the wetlands.

Juli ran as a green candidate but has proven to be anything but—see the Regal Center, the Giant Center, Bles Park and coming soon Hidden Lane/Askergrens, 124 homes with a special exception forced on residents by same supervisors. Christopher Companies will need a rezoning, but the board seems intent on paving and disrupting any green space left in eastern Loudoun.

The meeting Tuesday night included untruths by both Briskman and Randall. These are not your friends. Beware. Destruction for a good cause? Not so much.

When civilians lie to the government it is a felony when Supervisors and Chairs lie to civilians it is called politics.

The Bles Park special exception passed unanimously on January 18 with only minor conditions for approval. Despite this outcome, we are committed to continue to work on this to stay engaged and effect positive changes for wildlife and habitat. We want to thank all of our supporters who raised their voices for wildlife.

The conditions for approval included:

-The gravel path for the kayak launch site shall only be widened on the east side (away from the wetlands) and shall be limited to provide for safe passage and the regulatory minimum required width.

-The recreation fields shall not be lighted.

-The recreation fields shall be a natural surface.

Juli says there was misinformation but offers no proof. Randall lied I offered proof you would think a sitting supervisor or Chair would have better expertise in lawyer speak hyperbole. When a supervisor says someone is not telling the truth I tend not to believe them and figure they got caught red-handed, they did. Remember the green candidate at your door? Way in the rear-view mirror now!

The average home in Virginia is 1896 square feet, this plan adds 156 home areas of impervious surface to Bles Park.

Mention the planning commissions input, the BoS ignored it! They ignored the huge output by contingents.

Briskman is the supervisor who brought the possibility of homes at the park up in her communique from December 21st, Randall knew about it, I know because I sent Randall the information, Randall lied from the dais about this "misinformation." Speaking of misinformation there is no safety issue at the park see sheriff reports, none!

Coming for Hidden Lane next, watch for same excuses to double the housing allowed by-right there.

Special exceptions, now the normal and as for staff the county needs to upgrade their hiring standards.