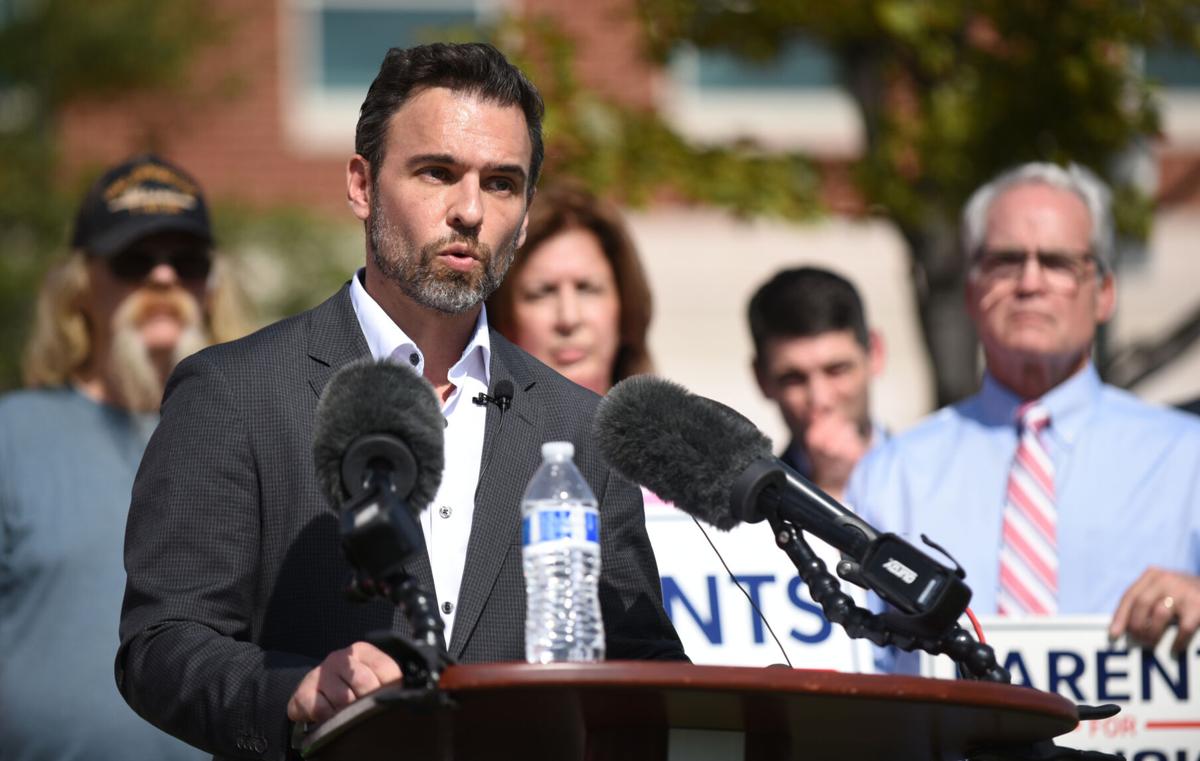 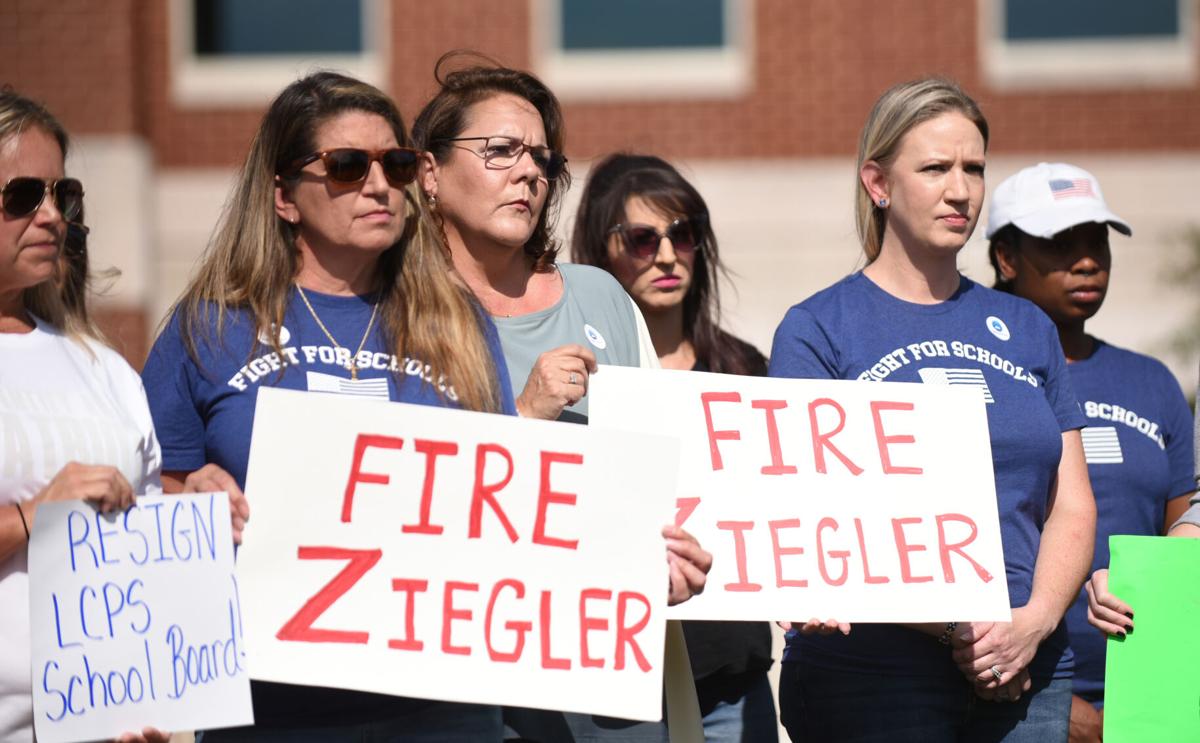 Supporters of the group Fight For Schools listen as Ian Prior, the group's executive director, speaks during a press conference Thursday.

Supporters of the group Fight For Schools listen as Ian Prior, the group's executive director, speaks during a press conference Thursday.

Ian Prior, executive director of the activist group Fight for Schools, held a press conference Thursday afternoon enumerating several demands of the school division in response to what he characterized as a negligent response from school administrators to a pair of sexual assaults.

The event, held outside the Loudoun County Public Schools Administration Building, comes in the wake of a report in the media detailing a pair of assaults at two Loudoun high schools involving the same suspect — one of which occurred at the end of May, and was not made public until this week.

While neither LCPS nor the sheriff’s office would confirm that the suspect in these cases is the same person, Loudoun County Commonwealth’s Attorney Buta Biberaj (D) confirmed to the Times-Mirror via text message on Wednesday evening that the two cases involve the same suspect.

In his remarks, Prior called for the resignations of LCPS superintendent Scott Ziegler as well as any member of the Loudoun School Board who had general knowledge of the May 28 incident but nonetheless continued to support the then-proposed Policy 8040, which among other stipulations, allows transgender students to use the bathroom corresponding to their expressed gender identity.

He also called upon the board members who had not supported Policy 8040 prior to the conclusion of the May 28 investigation to hire an independent law firm to investigate the school division’s handling of the incidents and issue a public report, as well as urging U.S. Attorney General Merrick Garland to direct pertinent federal prosecutors to open a Title IX investigation into LCPS.

Prior said that Ziegler’s “failure to keep an alleged assailant out of school” merited “immediate termination,” and that any board members who continued to support Policy 8040 “before the criminal conviction for the criminal case had concluded, and a conviction potentially could be made public pursuant to applicable law, should resign.”

As initially reported by The Daily Wire, the May 28 incident involved a male suspect who allegedly sexually assaulted a female student at Stone Bridge High School in Ashburn.

The Loudoun County Sheriff’s Office confirmed Wednesday that the student suspect was 14 years old at the time of the alleged assault, and confirmed that after a two-month investigation, he was arrested on July 8 on two counts of forcible sodomy.

Many Loudoun residents have been in an uproar after the May 28 incident came to light, days after another sexual assault that was reported on Oct. 6 at Broad Run High School, which is also in Ashburn.

The sheriff’s office reported the following day that a 15-year-old suspect was immediately arrested after the incident, and was being held at the Loudoun County Juvenile Detention Center on charges of sexual battery and abduction of another student.

The 15-year-old suspect, who was not identified because he is a juvenile, allegedly forced a female victim into an empty classroom at the school, where he held her against her will and inappropriately touched her on Oct. 6, the sheriff's office said.

The victim immediately notified a school resource officer, and as of Oct. 7 the suspect is being detained at the Loudoun County Juvenile Detention Center, according to the sheriff's office.

“All of you need to step down immediately,” Anne Miller, a resident of the Blue Ridge District, said to Ziegler and board members at the Tuesday’s public meeting, one day after the May 28 incident was made public.

The Times-Mirror reached out to LCPS for a response to Prior’s requests Thursday evening, but did not immediately receive a comment.

Ian Prior, and Fight for Schools is far-right organization that spreads fear based on lies and distortion. They use the modern right-wing roadmap of groups in America today, by bullying and forcing others to do yield to their lies unfounded theories. The only real outcome Fight for Schools wants is to raise money through fear and to prevent other people's children from learning actual history, studying real science, or even developing the vocabulary of a literate person.

Our county is messed up right now.

Sexual assaults in our high schools, cover-ups by the School Board and School Superintendent, privacy and dignity of our daughters and granddaughters abandoned under the guise of “diversity, equity, and inclusion,” kids being taught to judge each other by the color of their skin, pornographic books in our school libraries, pursuit of academic excellence discarded.

In the backdrop of this terrible situation, we have an election for the governor, lt governor, and attorney general for the state of Virginia.

Who do we really think will lead us back to a better place? Terry McAuliffe or Glen Youngkin?

Terry McAuliffe disqualified himself by loudly declaring he doesn’t want parents involved when it comes to their children’s education. What an outrage! How condescending!

But it’s not surprising.

We know Terry McAuliffe. We have history with Terry McAuliffe. It was not good. He did not put parents and families first the last time he was governor. He sold us out for his own benefit and power.

Terry McAuliffe put big money and “special interests” first. He will do it again. He said he would.

Eight years of McAuliffe-Northam have devastated our once great state in every possible way.

Glen Youngkin is different. We need to give him a try. Glen Youngkin will support the right of parents to be actively involved in their children’s education. Glen Youngkin and Winsome Sears will put academic excellence first, not political correctness.

By the way, I don’t want to hear from Obama or Stacy Abrams how I’m supposed to vote. They don’t have anything to do with our state. They could care less about our state.

I’m voting for Youngkin and Sears.

Sadly, your comment is full of inaccuracies, ignorance, and lack facts to corroborate.

FYI there was a woman who said she represented the democrats here in Loudoun who repeatedly tried to interrupt Ian Prior. Did not have any effect and she looked very foolish, the Fox News guy next to her just shook his head in disgust every time she mouthed off.

The people with prior knowledge including the Sheriff should join the rapist in jail.