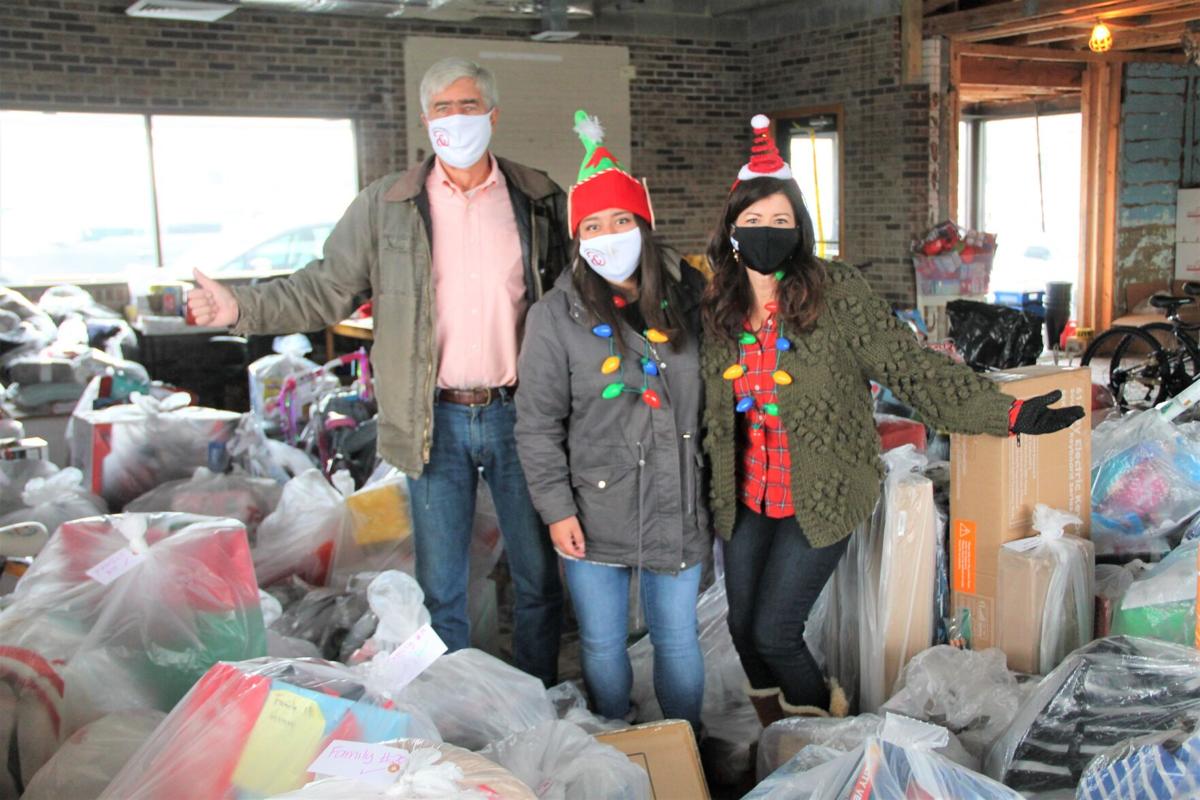 From left, Peter Burnett, founder of the Ampersand Pantry Project, with Gabriela Lamas and Aimee McKinney. They coordinated gifts for over 400 children this holiday season. 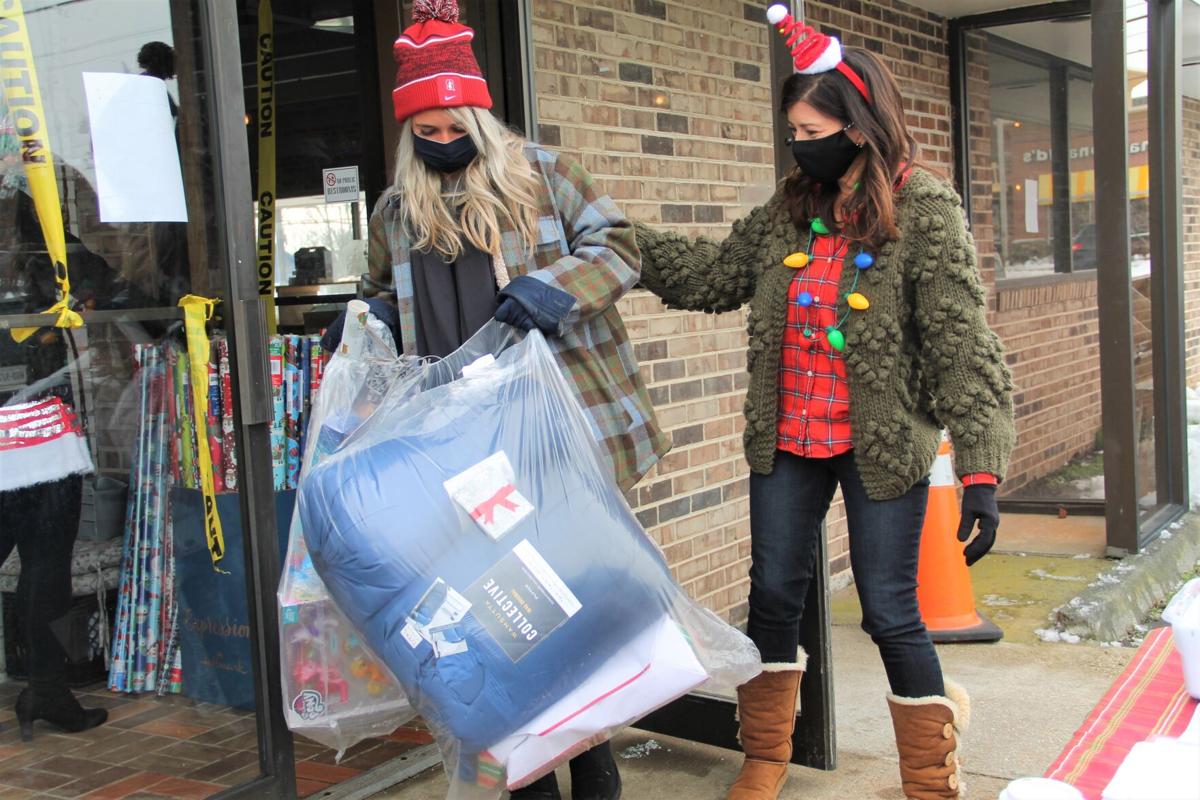 Jordan McKinney, left, with her mother Aimee, helped pass out gifts at the Ampersand Pantry Project over the weekend. 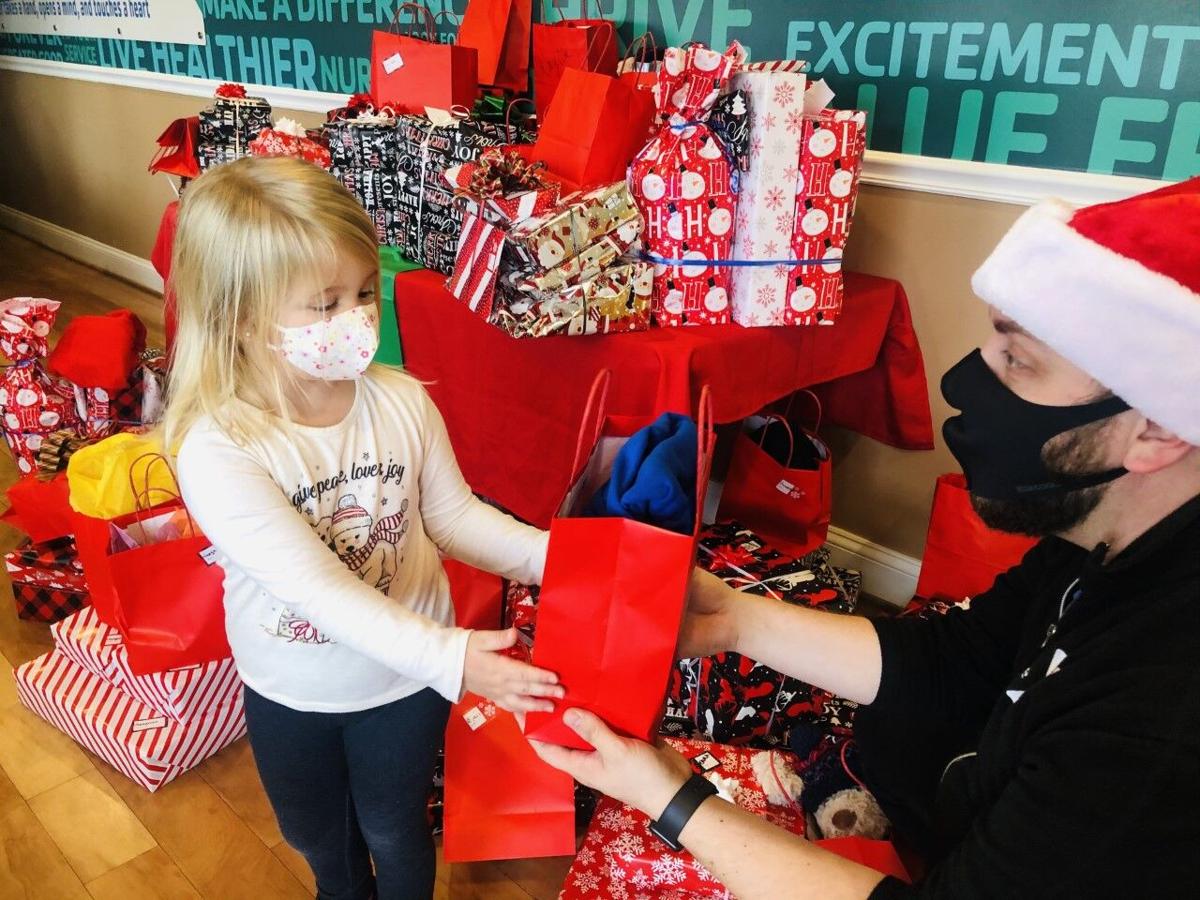 The Loudoun County YMCA provided gifts for 34 children this year.

From left, Peter Burnett, founder of the Ampersand Pantry Project, with Gabriela Lamas and Aimee McKinney. They coordinated gifts for over 400 children this holiday season.

Jordan McKinney, left, with her mother Aimee, helped pass out gifts at the Ampersand Pantry Project over the weekend.

The Loudoun County YMCA provided gifts for 34 children this year.

Loudoun County residents are spreading holiday cheer with some creative projects this holiday season to help local residents in need.

When Aimee McKinney, chief marketing officer at the law firm Dunlap Bennett & Ludwig, began volunteering at the Ampersand Pantry project on East Market Street in Leesburg this fall, it occurred to her that the people driving through the line every day for free lunches may need some help providing Christmas gifts for their children.

McKinney, working with Ampersand’s founder, Peter Burnett of the Leesburg law firm Burnett Williams, and another volunteer, Gabriela Lamas, coordinated an effort to provide gifts for more than 400 children.

The organizers decided they wanted the gifts to be personal and based on the children’s wish lists. For several days during the lunch line, they collected forms from anyone needing assistance. Volunteer shoppers were paired with families to fulfill the items on the list — with most children on average receiving four gifts each.

Each family’s gifts were placed in clear plastic bags and numbered for easy dispersal. The families also received a roll of wrapping paper so they could wrap the gifts themselves.

At the toy pickup days this past weekend, it was an emotional and fulfilling experience for the many volunteers who pulled together the event.

“I’m really proud of how our two firms worked together. It was a true collaboration. We’ve worked together every step of the way and received an outpouring of help. It has been amazing,” McKinney said.

Along with her team of 120 realtors, they have been conducting a telethon to raise funds for Children’s National Hospital with a goal of $100,000.

In addition, Reynolds spearheaded a toy drive for local kids in foster care and has filled a room with toys to distribute.

The team also collected 2,000 pounds of food for the Dulles South Food Pantry.

When Mara Bauserman heard about a four-year-old boy named Georgie from Martinsburg, West Virginia, who is battling Stage 4 Neuroblastoma, she wanted to do something to help.

She had heard that Georgie missed celebrating Christmas last year because he had just been diagnosed with cancer and was in the hospital receiving treatment.

This year, because Georgie loves Jeeps, his friends and family have organized a Jeep parade to welcome him home from St. Jude’s Hospital in time for Christmas.

Bauserman reached out to Loudoun County friends on social media to enlist more support and participation at the parade.

In a short time, 1,500 Jeep owners have signed up to participate in the event, which is being held Dec. 23 at 4 p.m. The lineup for the parade is at James Rumsey Technical Institute in Martinsburg. Organizers are also collecting gift cards to give to Georgie’s family.

After Keaira Jennings’ father passed away in July 2018, she decided to start a nonprofit in his memory because of his inspiring lifelong legacy of giving back to the community.

“He was the type of person to give you the shirt off his back. I just found out he paid to have a school and a church built in Nairobi, Kenya. Every day, he would pray about who he could bless that day,” she said.

For the holiday season, Jennings organized a gift card campaign focused on at-risk children attending the eight Title 1 qualifying schools in Loudoun County. Having a Title 1 status means 40 percent or more of the students are economically disadvantaged, and she really wanted to do something to help.

Starting Nov. 30, Jennings began a fundraising campaign which raised nearly $8,000 to purchase gift cards for the program. On Monday, she dropped off the gift cards at the Department of Outreach Services for Loudoun County Public Schools and they will be distributed to the parent liaisons at each school.

As an annual tradition in Loudoun County, in order to provide a safe way to shop for the the YMCA Loudoun Angel’s tree program this year, organizers created an online wish list for 34 children.

The response from the community was overwhelming, according to event organizer Kasia Bochenek. Within two hours, all of the presents were purchased, especially with help from one generous Santa, Melissa Smyser.

When Bochenek reached out to her, Smyser said she wanted to help provide a special Christmas, especially during this difficult year.

All of the presents were wrapped by the YMCA Loudoun board members and distributed on Dec. 21.

“This year is so different, and we were not sure if we would be able to do it and the response was overwhelming,” Bochenek said.