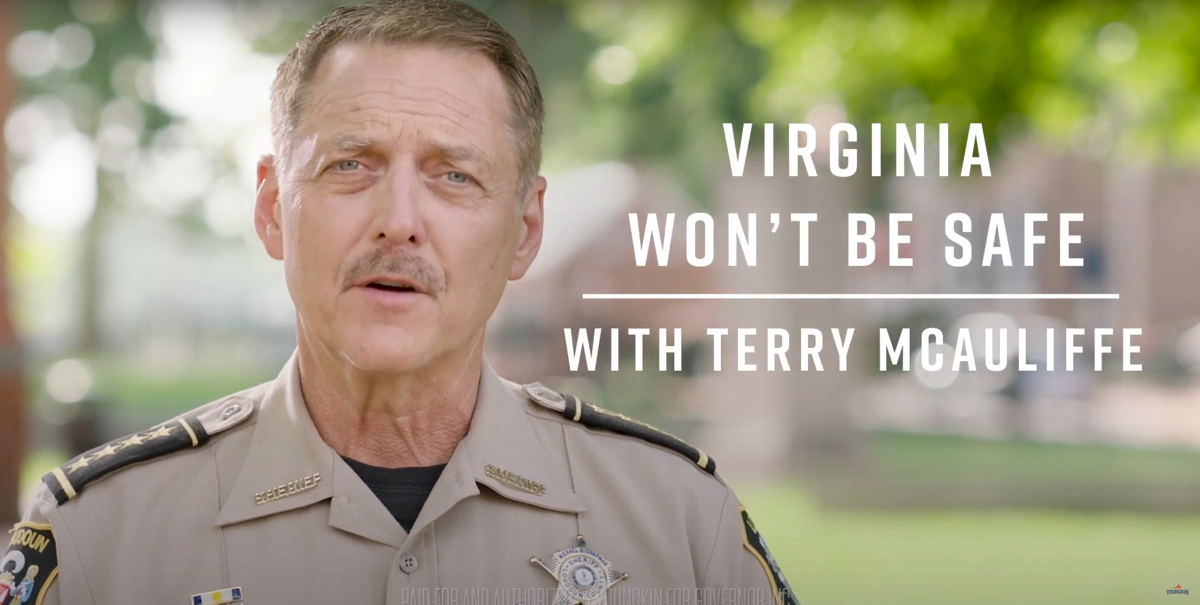 Chapman is one of 50 Virginia sheriffs to endorse Youngkin, including the Virginia Law Enforcement Sheriff’s Organization, which endorsed Youngkin on Tuesday, according to Youngkin’s campaign.

“It’s been a tough year, but it helps when elected officials have our back,” Chapman said. “Terry McAuliffe doesn’t.”

“As governor, McAuliffe’s handpicked parole board had one mission, ‘cut them loose,’ releasing violent criminals early, including a cop killer, and even making it easier for felons to get a gun,” Chapman said. “I’m Mike Chapman, sheriff of Loudon County. The fact is, Virginia won’t be safe with four more years of Terry’s McAuliffe’s policies.”

Youngkin, the Tuesday release states, will ensure the safety of all Virginians.

“I am honored to have the support of Virginia’s law enforcement community and look forward to working closely with them to make Virginia’s communities among the safest in the nation, not the most dangerous,” Youngkin said in a prepared statement.

“Terry McAuliffe has turned his back on law enforcement and embraced the most radical elements of his party that want to defund the police, abolish ICE, and close prisons,” he said.

Youngkin said failed leadership and dangerous policies have left Virginia less safe. He claimed that his plan will address the “rising violent crime and the murder rate at a 20-year high.”

Renzo Olivari, spokesperson for McAuliffe’s Campaign, said “These are more sad, baseless attacks from Glenn Youngkin. The truth is that when Terry was governor, Virginia was the fourth safest state in the nation. Terry put in place one of the toughest laws in the country to combat domestic violence, and he has a plan to keep guns away from dangerous people. Glenn Youngkin is the one who would put Virginians’ safety at risk by putting more guns on our streets and having an economic plan that would defund law enforcement.”

It’s true. McAuliffe doesn’t support our sheriffs or our police.

This recent June, McAuliffe couldn’t find time to attend the Virginia Police Benevolent Association (VPBA) state candidate screening event. The VPBA is a non-partisan association that has supported in the past both democrat and republican candidates. This year though was the first time in history that not a single democrat candidate for state office attended the VPBA. Why is that? Because McAuliffe, Ayala, and Herring don’t support those who protect our communities.

When he was previously governor, McAuliffe bragged on his own Twitter account about diverting $750K in federal funding that would have been used for law enforcement training. Why would he do that? Because he’s not interested in giving those who protect us the training they need.

McAuliffe loves the endorsement of those who hate our police. That’s why so many of our first line defenders and their leadership are endorsing Youngkin.

Among the ways Sheriff Chapman's department has made Loudoun 'safer' is to kill a Costco employee in a mental health crisis and kill a suicidal teenager. And fire experienced law enforcement staff when they showed insufficient loyalty.

“Making it easier for felons to have guns” - I would have thought you would like that idea considering that your convicted felon friend/campaign manager caught a firearm violation on top of the Loudoun Tribune fraud conviction.