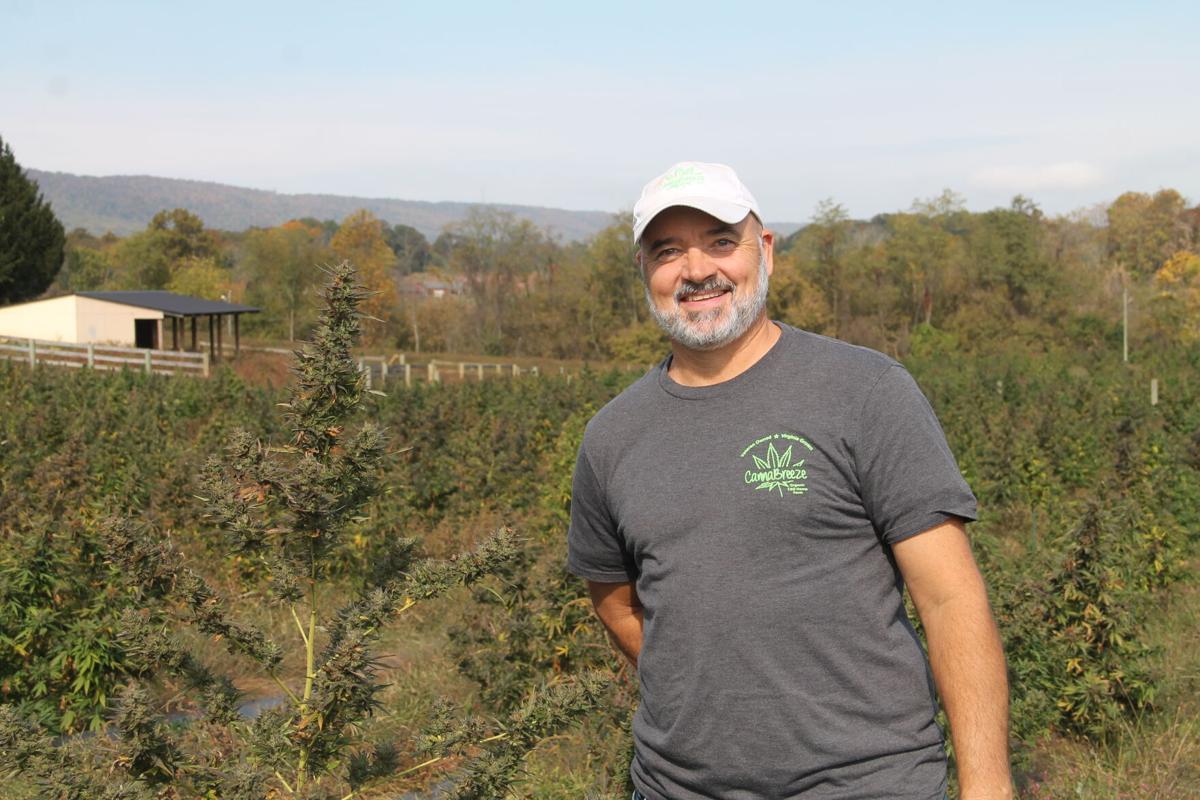 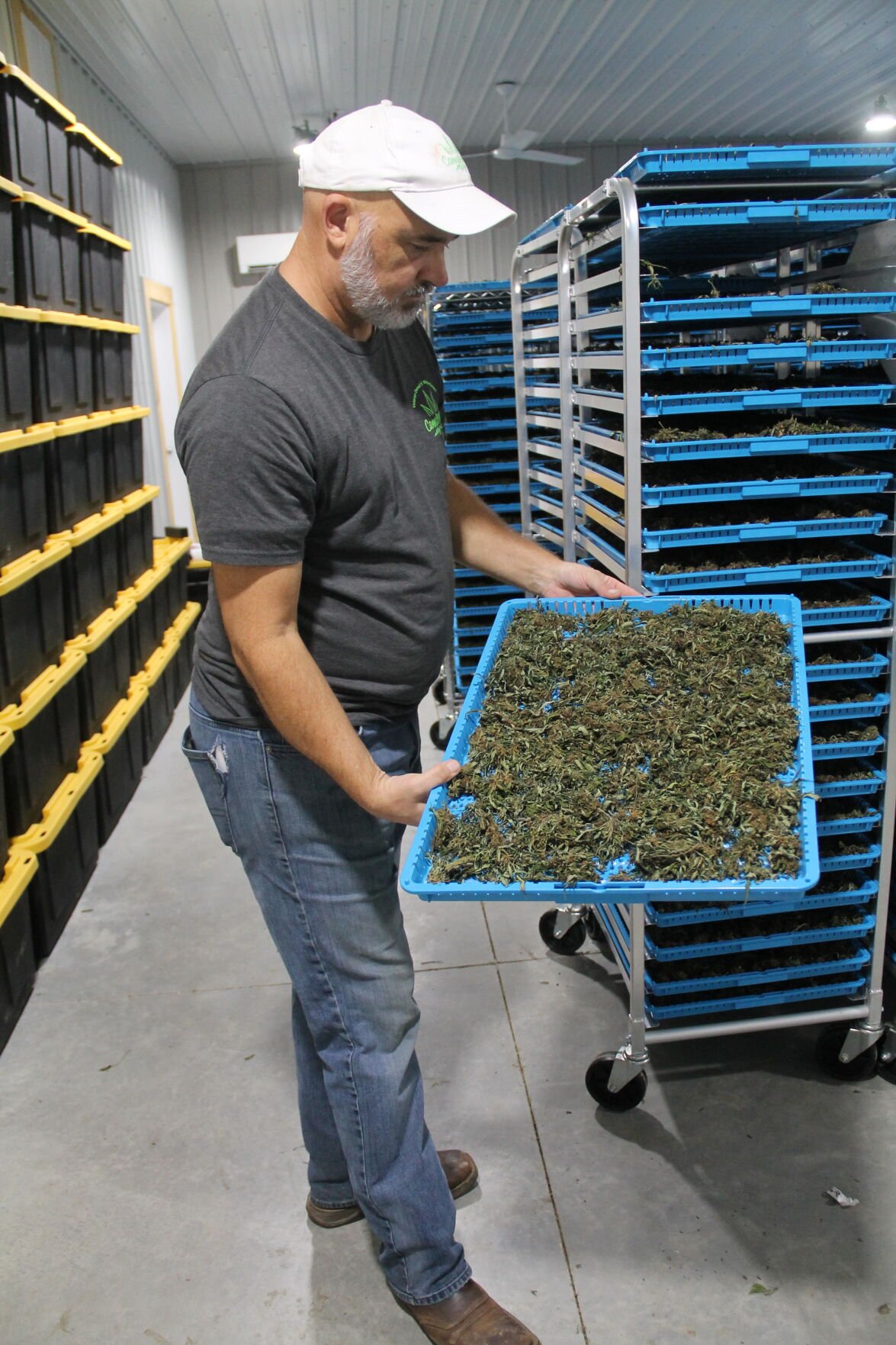 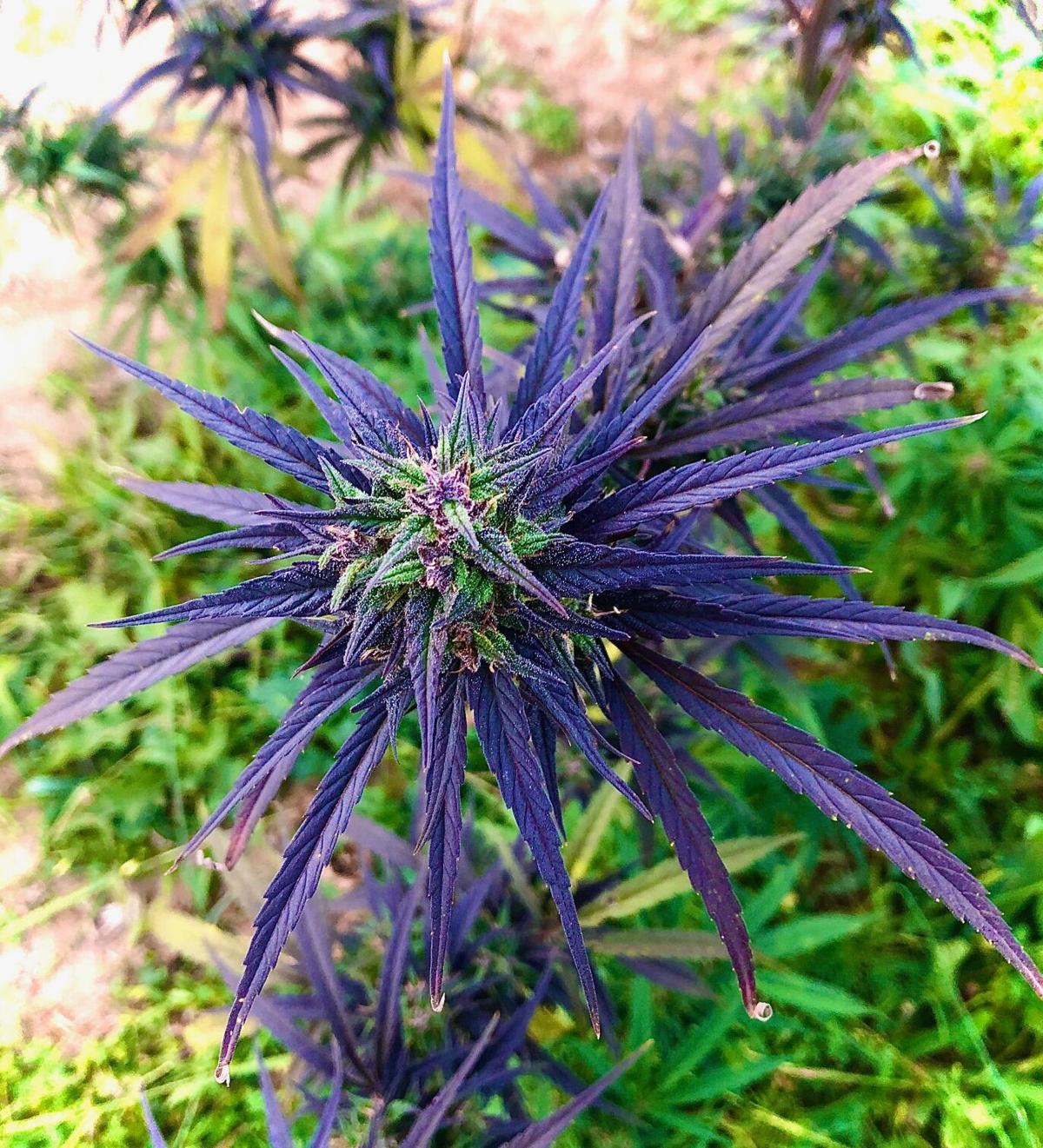 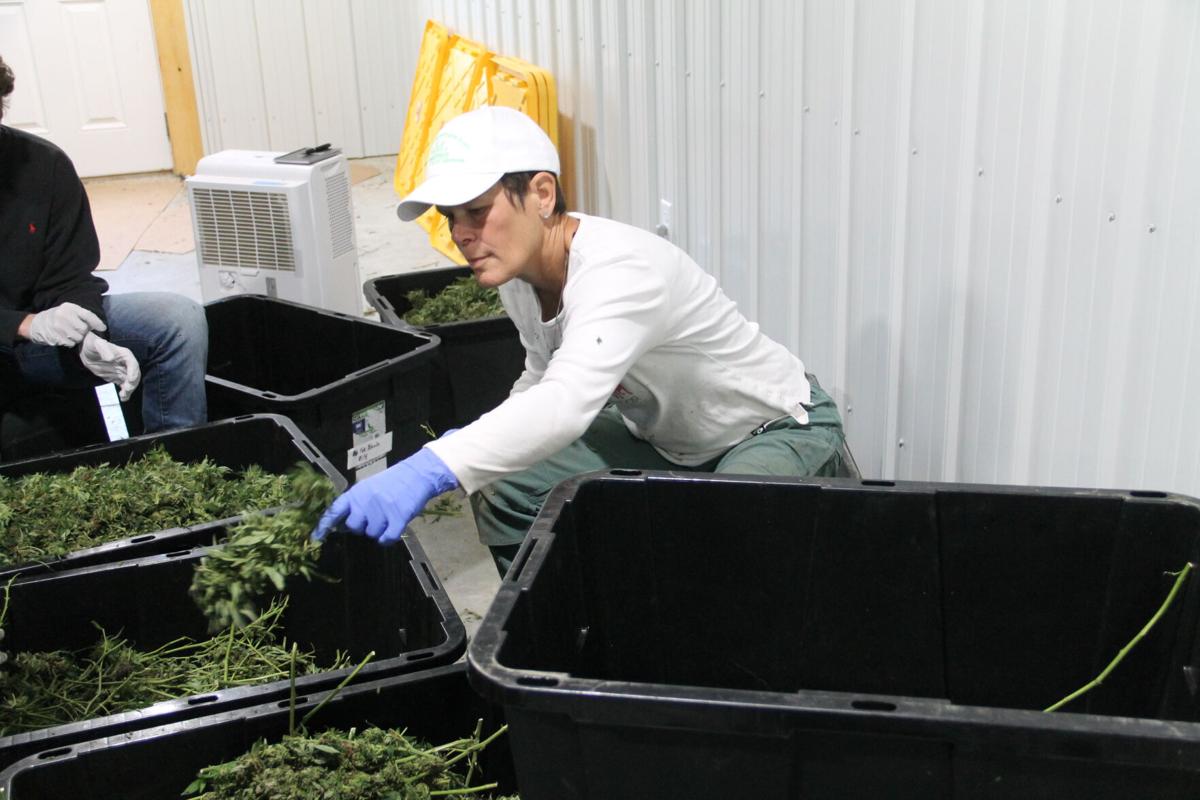 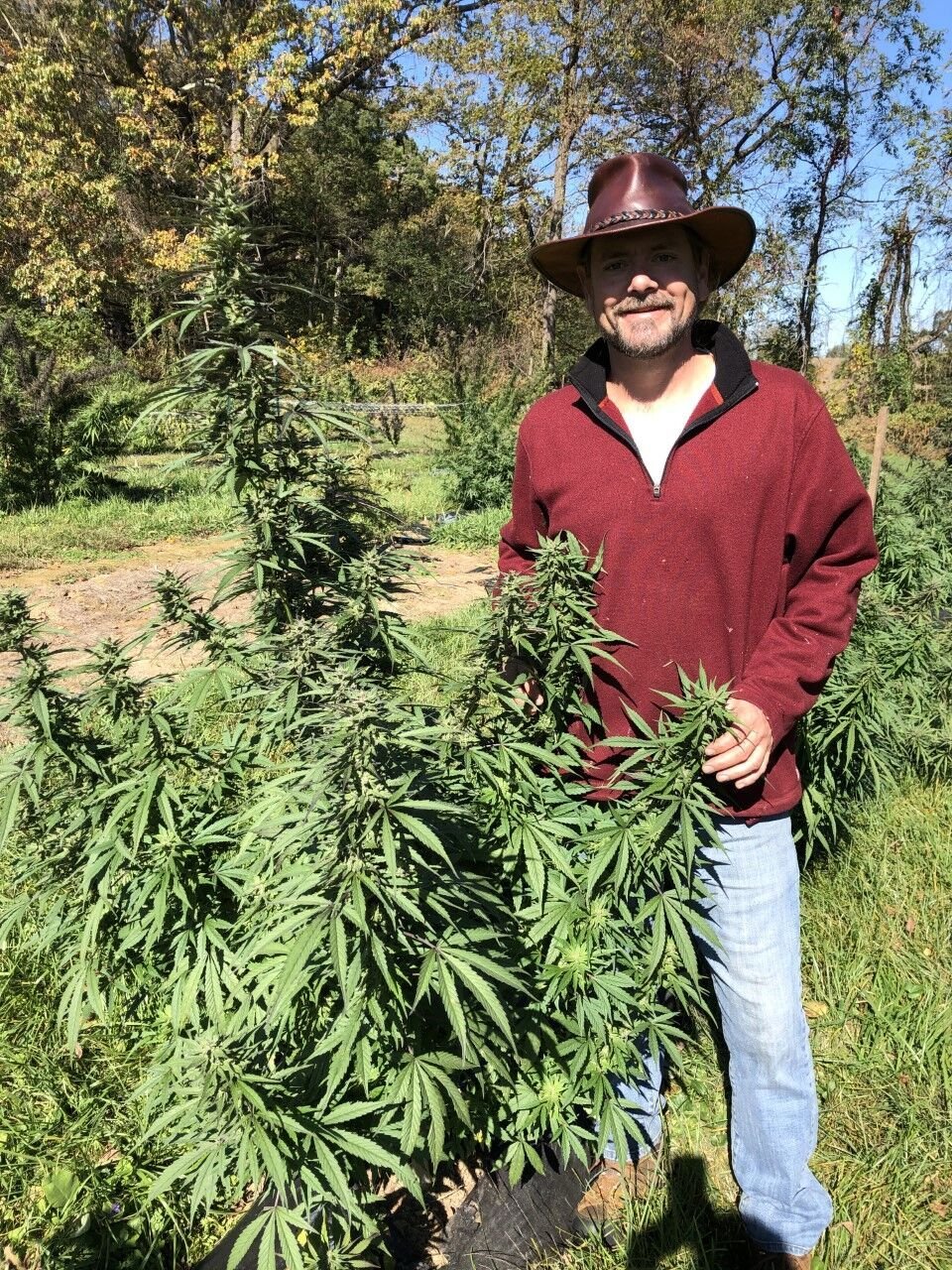 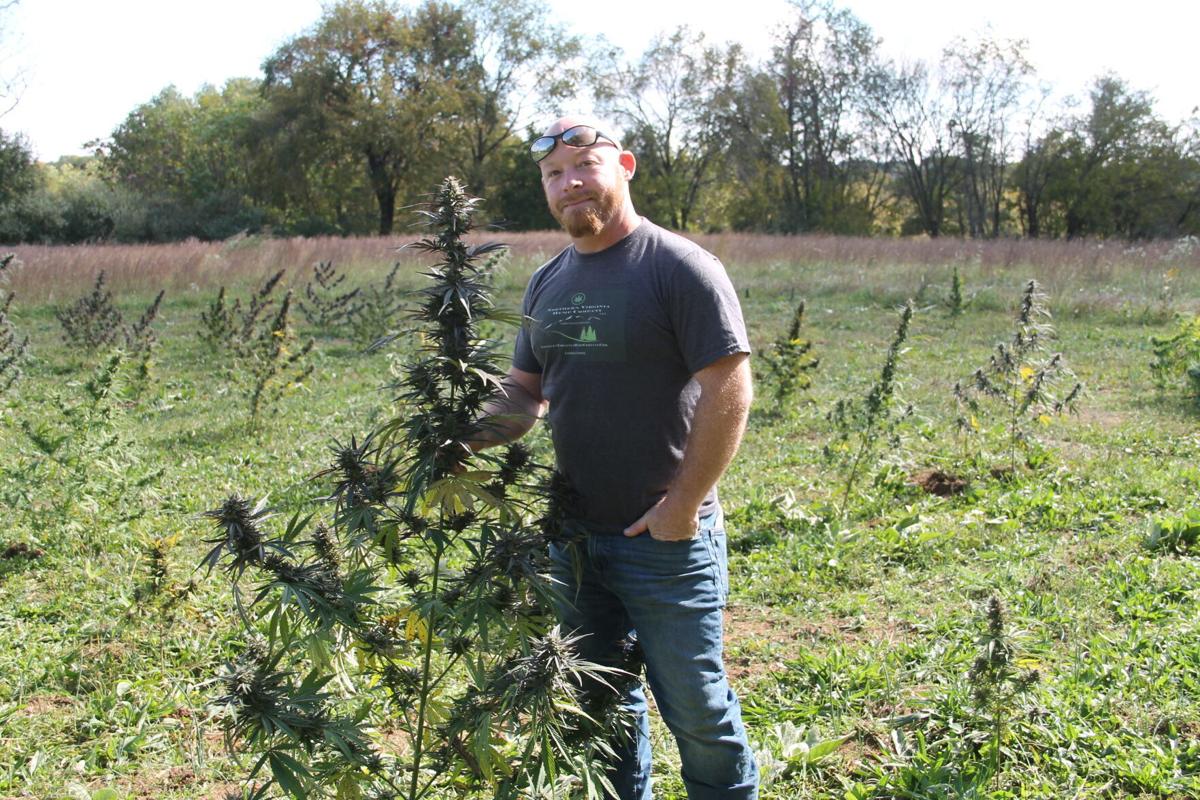 As Loudoun County farmer Luke Greer inspects his first crop of hemp plants, he is pleased with the rows of tall and bushy stems and says they are ready for harvest.

Greer, owner of Northern Virginia Hemp Company on Allder School Road in Purcellville, produces CBD oil, topical cream, massage cream and other products used for humans and animals. The items are made using a C02 extractor.

A Purcellville native, Greer says it is exciting and grounding to return to agriculture production in his hometown. He planted three quarters of an acre of hemp this year, or about 500 plants, and plans to expand next season.

Greer describes how the crop is labor-intensive, requiring daily checks on the plants, watering, pest and weed control and removing the male plants.

As a photographer and yoga instructor, Greer believes hemp farming blends well with his interests.

“I’m very happy with the first crop. All the tests are compliant legally, and it has been a very successful first year,” he said. “It’s an emerging market with many fluctuations, but it is growing by leaps and bounds. There is growing demand, and it’s a good option for small farmers.”

Hemp is now a fast-growing industry in the U.S., and Loudoun is getting in on the action.

After the federal Farm Bill passed in 2018, hemp farming is in its second year across the nation. The bill decriminalized growing the hemp plant and paved the way for farmers to grow and sell hemp for the first time since the 1930s.

In 2019, the Virginia Industrial Hemp law passed, establishing policies and processes to grow hemp in the commonwealth.

Hemp, which is grown for its cannabidiol oil (or CBD), is estimated to be a $5 billion business in 2020. By 2025, it is estimated the industry will grow another $6.6 billion, according to the Brightfield Group. Profit margins can vary, but the product can be sold for around $300 to $600 a pound.

While not regulated by the Food and Drug Administration (FDA), hemp-based CBD is known to help with anxiety, inflammation, digestion and pain. Users are often directed to consult with a doctor before using CBD products because they could interfere with other medications.

There are approximately 1,200 active hemp registrations in Virginia, with about 2,000 acres planted outdoors and 11 acres indoors. Orange County has the largest number of hemp crop acreage — topping out at more than 700.

Farmers in Loudoun County are joining the movement. In Loudoun, there are currently 23 growers registered with the commonwealth, and 11 are actively growing hemp on a total of 30 acres.

Loudoun’s Executive Director for Economic Development Buddy Rizer said the growth of hemp is another opportunity for farmers to diversify with a new crop that has value-added opportunities, just like grapes for the wine industry and hops for the craft beer industry.

“Because hemp plants grow well in Loudoun’s fertile soil and favorable climate, farms can pivot to hemp production or simply add in a new revenue stream,” Rizer said. “Right now, Loudoun has more registered growers and acres in production than any other county in northern Virginia, and we expect to see those numbers increase ... The market is still brand new and everyone is trying to define the opportunity, but studies suggest that hemp production and sales in the U.S. will grow exponentially for several years, presenting a great opportunity for Loudoun farmers.”

Beth Sastre, a commercial horticulturalist with the Virginia Cooperative Extension, said that while Loudoun County has good soil, site selection is key to growing a successful crop due to often unfavorable weather conditions. She said farmers considering growing hemp should request a consultation and have a site evaluation.

“Choosing the right site is very important, and that is something I can help them with,” Sastre said.

In Lincoln, Richard Taylor returned home to his seven-generation family farm when the pandemic began this spring.

“There is really wonderful soil here, and it is so enjoyable to be able to take advantage of this,” Taylor said.

His first crop of 122 plants was what he calls a feasibility study to test growing techniques, field quality and how to care for the plants.

“This is year one. We are at the beginning, and our goal is to be a producer of organically grown products from a high end small batch farm,” Taylor said. “My hypothesis was that hemp would grow well here and that’s my conclusion. It’s a wonderful harvest time because it’s the fruition of an idea that came from seeds gifted last fall, and I’m here now.”

Taylor added, “I believe the world needs this plant and is ready for it. It carries many medicinal compounds.”

“The first year was very successful, and I was in love with it right out of the gate,” Boogaard said.

For Boogaard, the CBD industry is personal. He is a strong believer in his products and in the ways the plant can help heal people physically and mentally. In December 2019, his daughter was diagnosed with non-Hodgkins lymphoma. So he decided to expedite the CBD product line so she could begin using CBD as part of her treatment.

“Most say it’s too good to be true, but at that point I said, ‘We are all in.’ We became fascinated and in love with what this plant can do in the health community. We have dozens of testimonials from people that it has changed their lives,” Boogaard said.

In June, Boogaard planted five strains of CBD hemp with 12,000 hemp plants on more than 10 acres at the farm. He has also built a facility to process the plants and a lab to produce the products. In an adjacent room is a large area for drying plants once they are bucked.

“Everything is organic, there are no pesticides and we use natural cultivation and tilling. We use praying mantis and ladybugs to combat the predators. It has been successful,” he said.

As of this week, they had harvested 1,400 pounds of plants, but they still have about 4,000 pounds to go. “I figure we’ll be done by Thanksgiving,” he said.

Cannabreeze’s owners plan to eventually become a “hempery” destination, with a tasting room, juice and coffee lines and other products.

“We have hit the ground running ... Our goal is to remove the stigma this plant has been under for the last 85 years. We want this to be a place where people can come and safely enjoy the benefits of CBD,” Boogaard said.