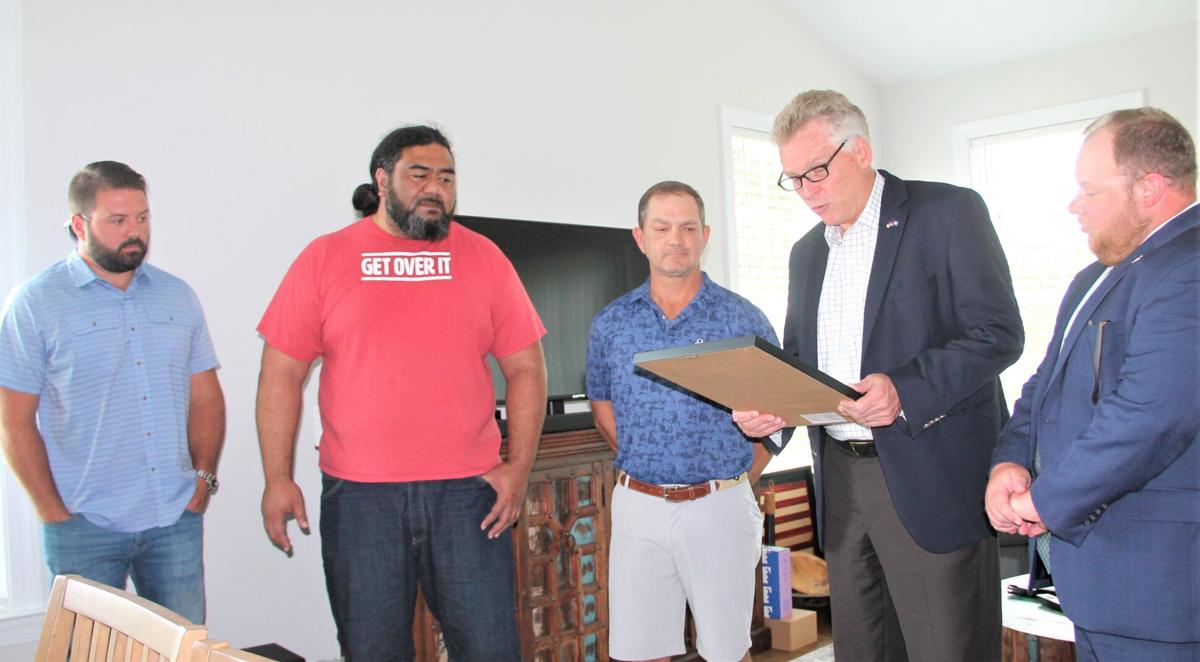 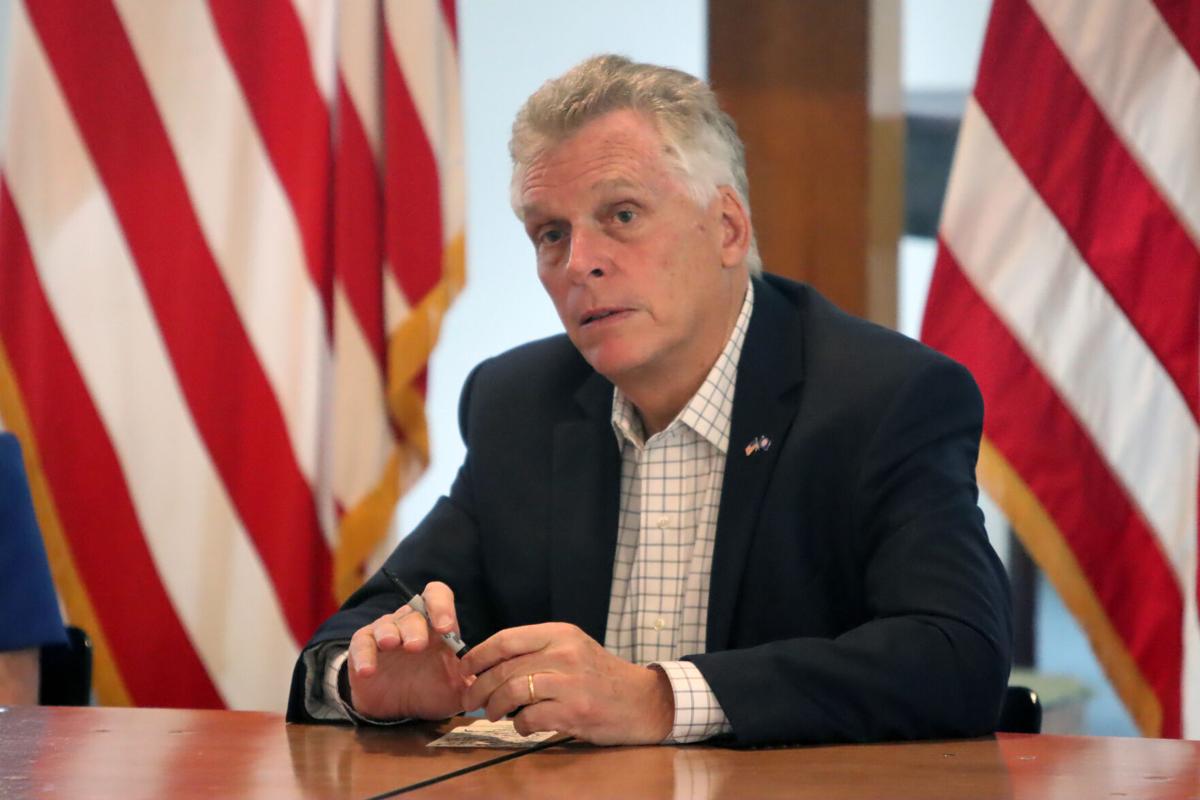 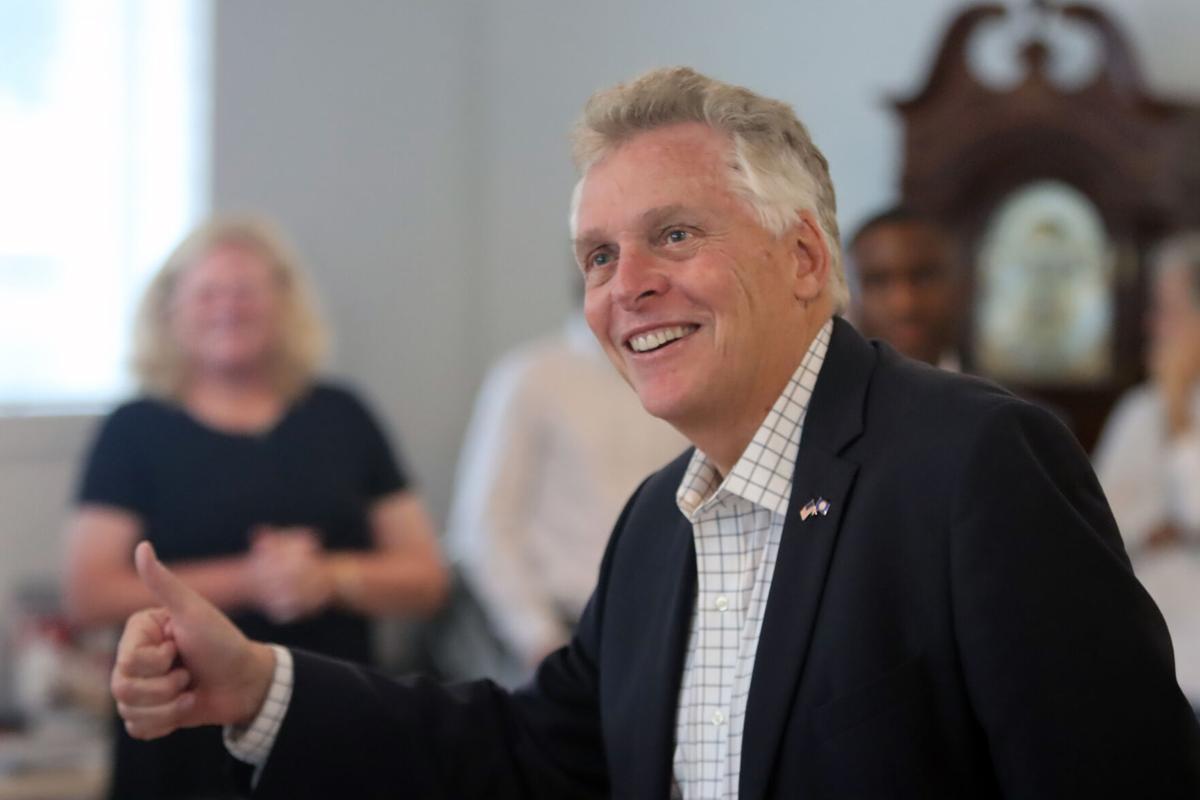 Terry McAuliffe, Democratic nominee for governor, gives a thumb up as he arrives in Leesburg on July 20 for a roundtable discussion with veterans. 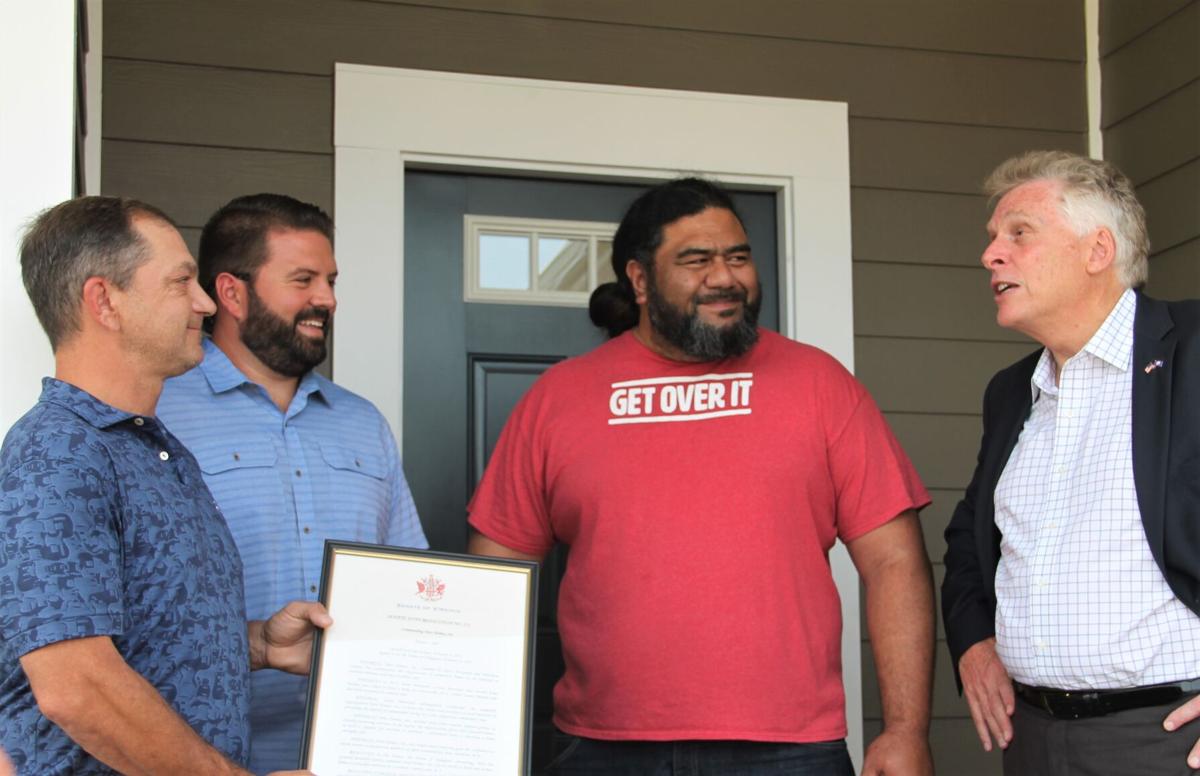 Terry McAuliffe, Democratic nominee for governor, gives a thumb up as he arrives in Leesburg on July 20 for a roundtable discussion with veterans.

At a roundtable discussion in Leesburg Tuesday, veterans urged Democratic nominee for governor Terry McAuliffe to support former service members in the areas of employment, education, tax relief and aiding spouses of veterans.

“I am honored and humbled to have the support of so many veterans who have dedicated their lives to protecting our country and this commonwealth,” McAuliffe said in a prepared statement.

On Tuesday, the gubernatorial candidate met with local leaders and veterans in Leesburg and Purcellville to share his plans and hear from voters.

More than a dozen veterans met with McAuliffe at the VFW Post 1177 in Leesburg for the roundtable discussion. Others met the candidate at a veteran’s home in Purcellville to hear about efforts being made to house veterans in need.

“The last thing we [should] have to worry about is health care, and paying the bills,” he said.

“We need to be a little more generous,” he said. “Our veterans are going through a lot and those that have come back from overseas [are] dealing with a lot of issues that some people call ‘not real’ but there are a lot of stressed [service] members coming from war zones and mental health is another issue we need to really deal with.”

“So, what I would love to see is the state of Virginia be very progressive protecting our veterans, not just while they’re in there, but when they come back,” Martinez said.

Sen. John Bell (D-13th) and Del. David Reid (D-32nd) were among those to endorse McAuliffe. Also in attendance were members of the Leesburg Town Council and Loudoun County Board of Supervisors, including Supervisors Kristen Umstattd (D-Leesburg), Mike Turner (D-Ashburn) and Leesburg Mayor Kelly Burk.

“As a Navy veteran and the chair of the Virginia Military and Veterans Caucus, I have been incredibly proud to endorse and support Terry McAuliffe for governor,” Reid said. “Terry did incredible work as Virginia’s 72nd Governor to improve the health and welfare of our veterans.”

“Terry has worked tirelessly to support Virginia’s veterans and under Terry’s leadership, Virginia will continue to strengthen and champion our service members, our veterans, and their families,” he said.

During McAuliffe’s term as governor from 2014 through 2017, Virginia became the first state in the nation to functionally eliminate veteran homelessness, campaign officials stated.

Tony Faolo, a U.S. Army veteran, said one way to improve employment for veterans is to get more retired service members working in the Virginia school system. Faolo said he’s been a substitute teacher in Loudoun County Public Schools since 2003.

Robinson said service members about to be discharged need more time to explore career opportunities before leaving the service.

Additionally, Robinson said he hopes that McAuliffe will consider expanding into the commonwealth the Department of Defense’s SkillBridge Program, which provides service members civilian work experience through specific industry training, apprenticeships, or internships during the last 180 days of service.

“They both go hand-in-hand to support our men and women who are transitioning out of the service, which supports [their] business growth, which supports the number of things that he’s already done as governor, but if you can’t get them early on so they have proper time to plan then it becomes for nothing.”

McAuliffe continued his tour through Loudoun County in Purcellville, stopping at the most recent home built for a veteran by HeroHomes.

The Purcellville-based nonprofit, co-founded by Matt Lowers and Jason Brownell, has built four homes in Loudoun County and is currently working on a fifth in Round Hill.

McAuliffe praised their efforts and spoke with retired U.S. Army Sergeant Vainuupo Avegalio — known as AV — who moved into the home in May.

Avegalio, who served 12 years in the military and was at one point homeless after being discharged, spends a portion of his income on helping other veterans battling post-traumatic stress. He also volunteers at correctional facilities and works with at-risk youth to help prevent suicide through his art and poetry workshops.

Brownell and Lowers hope that by providing Avegalio with permanent housing, it will help him expand his mission of helping others.

Avegalio told McAuliffe that he would be living on the streets were it not for HeroHomes.

“I was in disbelief when I heard back from them that I would be receiving a home,” he said.

“I said ,‘Is this real?’ As a veteran, we do not like asking for help — we want to do things for ourselves,” Avegalio said.

- NO to Critical Race Theory

It’s great that McAuliffe supports veterans. We all should. They and their families have sacrificed so much for this country.

But after 8 years of McAuliffe-Northam leadership, most veterans I talk to can hardly recognize Virginia anymore. Now our schools, government, and big businesses divide us by the color of our skin and teach us to hate each other because of it, using catchy words like diversity, equity, and inclusion. The dignity and privacy of our wives and daughters has been sacrificed to enable males to expose themselves in women’s bathrooms and girl’s locker rooms. And our police and sheriffs, who put their lives on the line to defend our communities, are now blamed as being systemically racist and their funding targeted to give to “social justice” issues.

Virginia needs someone who doesn’t pander for the votes of veterans while hating the values they fought, and their families sacrificed, for. We need someone who can bring us back together. McAuliffe has demonstrated he’s not that guy.

Youngkin comes to Loudoun and it is news story beforehand McAuliffe leaves and few care.