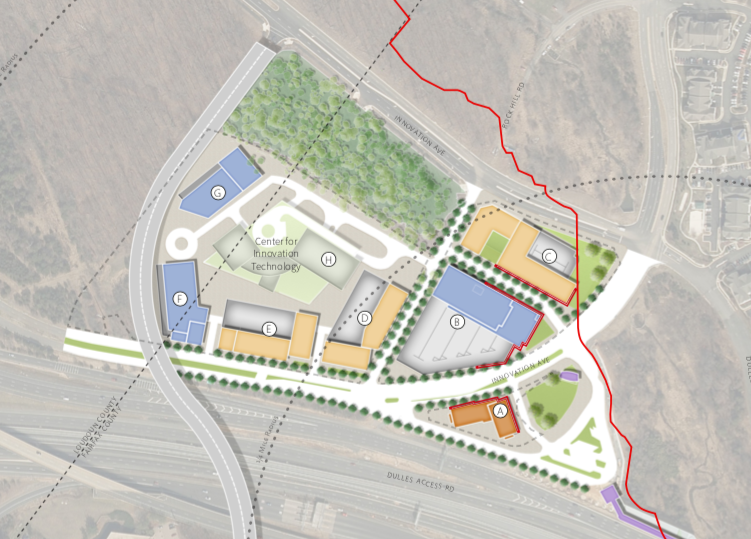 Crimson Partners' concept map for the Center of Innovation Technology, or CIT, in Herndon. 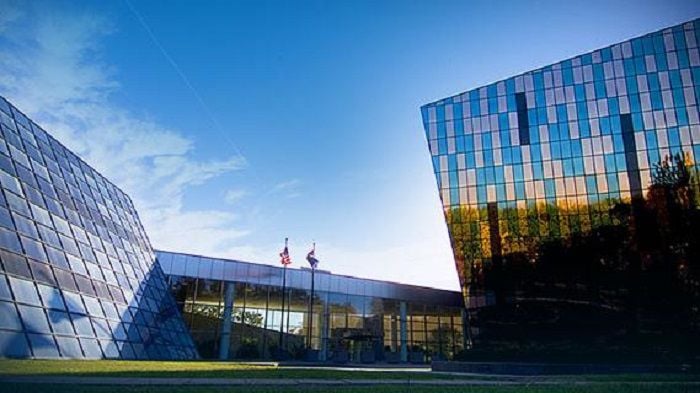 On June 27, Crimson Partners filed for a pre-application conference in Loudoun County for the property that straddles Loudoun and Fairfax counties.

Included in the application are plans to build around the current CIT building to create a mixed-use, master-planned community with 1.1 million square feet of office space, 60,000 square feet of retail, a 250-key hotel and 1,120 residential units.

The application was first reported by the Washington Business Journal.

“We are hoping to get a preliminary indication of expected proffer costs and some general feedback on the direction of our current planning efforts compared to the county's expectations. We are also looking for direction on how best to deal with the existing, nearly vacant CIT building,” Crimson Partners Founder and Managing Partner Matthew Dougherty said in the application.

Crimson Partners’ vision is one of the first to publicly surface since the building was considered in joint-county bid for Amazon’s new headquarters, or HQ2. In November, the bid by Fairfax and Loudoun was passed over for the Crystal City proposal and another in New York City, which backed out shortly thereafter.

Three months later, the Loudoun County Economic Development office said the property has been pitched to other high-profile companies in search of a greenfield campus, according to a statement on its website. The 338-acre property will also have access to the future Metrorail Silver Line track.

“When we pitched Innovation Station as an opportunity for Amazon, I was convinced that it was the best greenfield opportunity anywhere in the country. I continue to believe that today,” Loudoun Economic Development Executive Director Buddy Rizer said at the time. “In the meantime, we have made great progress in marketing our site to other potential users.

Crimson Partners has developed and invested in more than 3 million square feet of residential, office and industrial property in the mid-Atlantic region since its inception in 1992, according to its website. Projects include the Dulles Technology Center, Dulles Station and most recently 3901 North Fairfax Drive and 650 North Glebe Road.

Hotel and offices, fine...housing no!! Who is going to educate these kids. You are killing those who live here now with these incessant requests for residential units!! Give us a break!