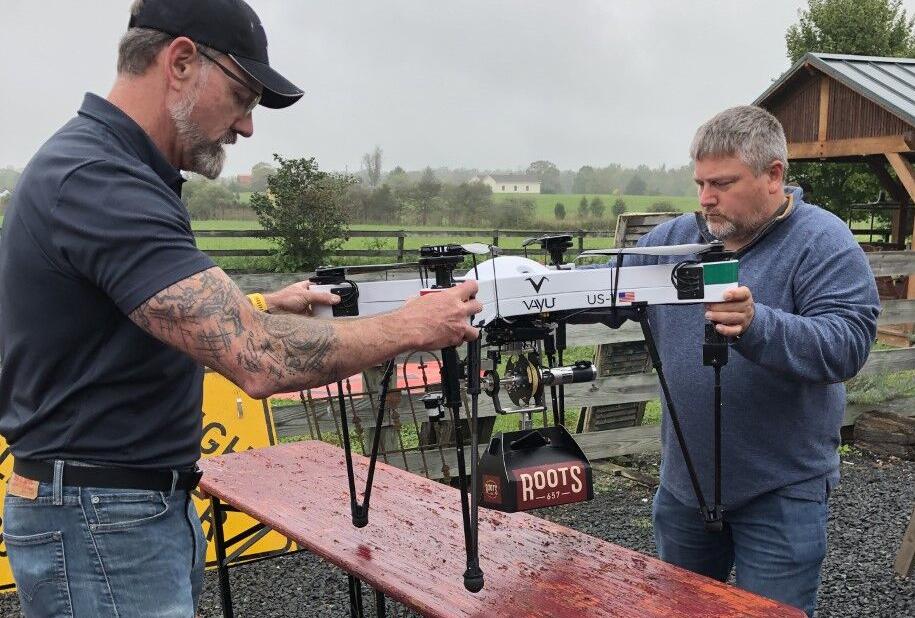 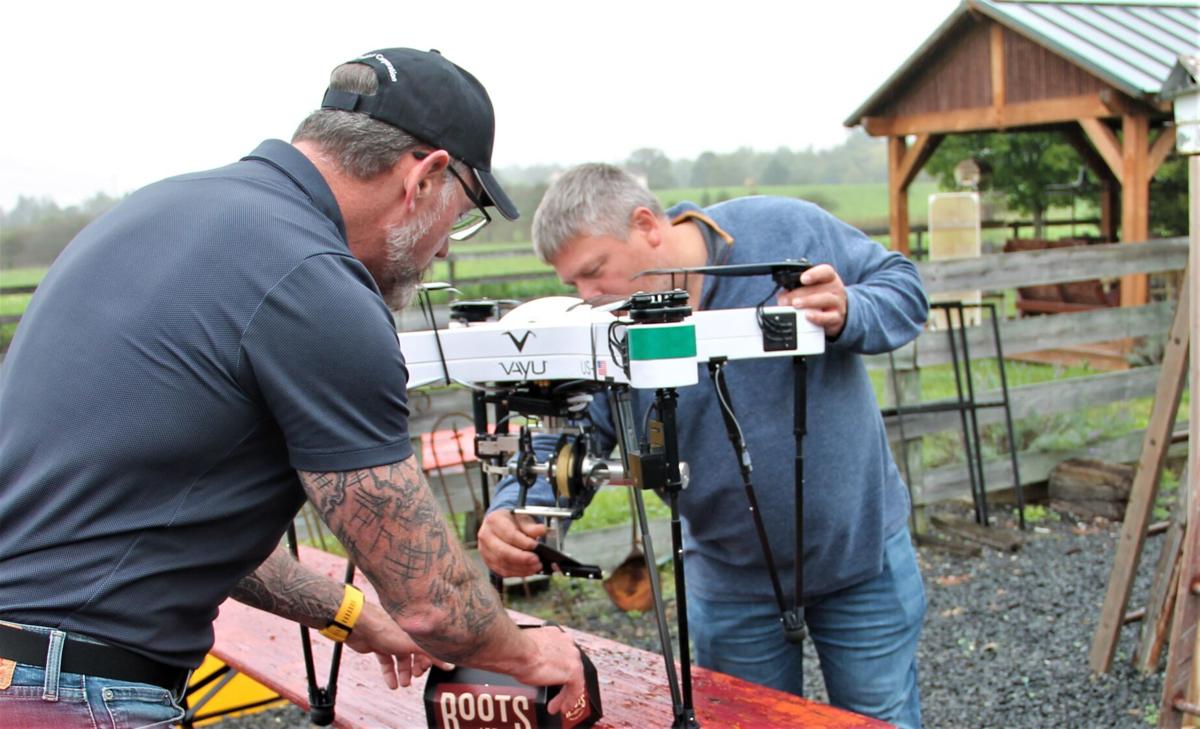 T.K. Eppley, president of Vayu Aerospace, left, and Nathan Grier, director of flight operations for Vayu, right, test the drone delivery system Wednesday with a brisket sandwich from the restaurant Roots 657 in Lucketts.

T.K. Eppley, president of Vayu Aerospace, left, and Nathan Grier, director of flight operations for Vayu, right, test the drone delivery system Wednesday with a brisket sandwich from the restaurant Roots 657 in Lucketts.

In what is perhaps a preview of things to come, northern Virginia’s first commercial food drone delivery was completed Thursday morning, with food from Roots 657 Cafe in Lucketts being delivered to Rust and Feathers, a nearby antiques store.

Through a partnership with Xelevate Solutions, a new unmanned flight training center opening this month on Taylorstown Road in Lucketts, and Vayu Aerospace, a drone manufacturer based in Ann Arbor, Michigan, the two organizations teamed up with Chef Rich Rosendale, owner of Roots 657 for a proof of concept by delivering a freshly-made brisket sandwich using a custom-built U.S. drone made by Vayu.

“We wanted to show this can be done in Northern Virginia because this airspace is one of the most complicated,” said Preston Huntington, client relations manager for Xelevate Solutions. “Xelevate wants to be thought leaders in promoting this safely, and this is a mature model of what it looks like. This is a great example of some of the good things we can do with drones,” he said.

According to Federal Aviation Administration (FAA) regulations, the drone delivery is required to be within a visual line of sight, Huntington said. Once there are new procedures in effect, the possibility of food delivery to locations beyond line of sight will become possible, he said.

T.K. Eppley, president of Vayu, said his company was asked to build a custom drone for the project. The U.S.-built quadcopter weighs in at 22 pounds, according to Eppley. Its flight time is 70 minutes with a maximum altitude of 5,000 feet and maximum airspeed of 45 miles per hour and a range of 28 miles.

Eppley recently attended a commercial unmanned systems show in Las Vegas where he began looking for a system that would allow the team to deploy the food without having to land a drone.

Vayu’s drone was integrated with a remote delivery component made by A2Z Drone Delivery, which is capable of lowering a package from a safe height, he said.

Marcy Eisenberg, president and CEO of Xelevate Solutions, along with her husband, Andrew Biechlin, who serves as the company’s vice president, said they are excited about the opportunity to test a drone delivery for the first time in Northern Virginia.

“It looks durable and a thoughtful approach with the rope to bring it down safely,” Eisenberg said.

On Thursday, the drone flew to a height of about 100 feet and, using a radio-controlled tethered delivery system, it lowered the food box from 100 feet slowly to the ground. The drone is able to carry up to about six pounds, Eppley said.

“We want to keep the drone away from people as it’s a safety issue,” he said.

Rosendale said he was excited to partner with Xelevate, as it is expected to be a place for innovation.

“We are happy to be a part of this test run,” he said. “There are a lot of exciting things that are happening at our little restaurant in Lucketts and this is a big step for us.”

Earlier this spring, Xelevate received a conditional approval letter from Loudoun County to construct a conference and training facility on Taylorstown Road after filing an application in early spring.

The 66-acre site is located within 45 miles of Washington D.C.

“As the surge in demand for drones and unmanned systems continues to skyrocket, there is a clear need for physical infrastructure to be available to support this technology,” said Marcy Eisenberg, president and co-founder of Xelevate, in a prepared statement.

Supervisor Mike Turner (D-Ashburn), a retired Air Force colonel, spoke highly about the project, including during a Board of Supervisors business meeting on July 20.

The supervisor said after a tour that the company has already received interest from at least two federal government agencies and he expects Xelevate to bring “big business” into the county.

“If you are a business or company or government entity that wants to test new drone technologies, test new drone procedures, train drone operators, this will be the single national center of excellence for unmanned aerial systems in the United States,” Turner said.

Buddy Rizer, executive director for Loudoun Economic Development, said communities need a skilled workforce, access to customers and a critical infrastructure advantage to attract a business cluster. He said the combination of Loudoun, Xelevate and the federal government being the world’s largest customer helps to build that cluster.

“Once operational, Xelevate will be the closest commercial drone testing site to the decision-makers in D.C. and the major defense contractors that populate this region,” Rizer said in email to the Times-Mirror.

He said with Xelevate’s location in Loudoun — specifically two miles outside of the region’s no fly zone — will allow major players and innovative drone startups to collaborate, test and demonstrate their capabilities in a private setting.

“Thanks to the site’s proximity to Dulles International Airport, we can also host drone companies that are currently located on the West Coast and encourage them to invest in the region,” Rizer said.

“While it’s too soon to discuss specifics, we’ve had productive conversations with top drone companies since the team at Xelevate announced their plans,” he said. “We feel strongly that Loudoun will be a hub for UAV research and development, manufacturing, testing and sales — and Xelevate helps further that mission.”