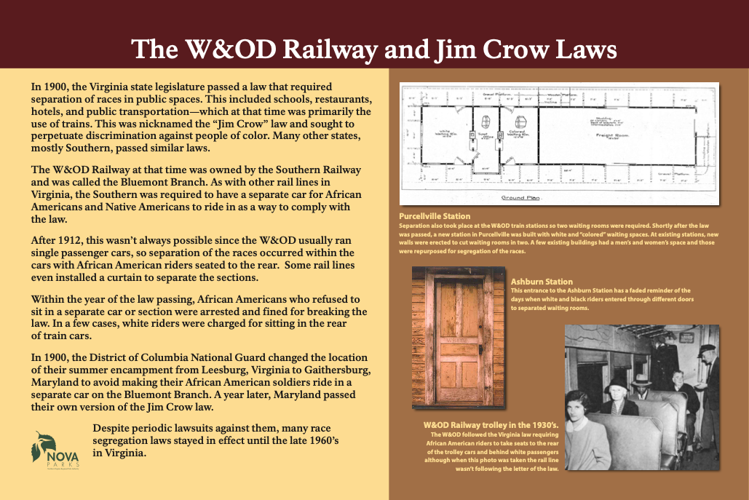 Separation took place at the W&OD train stations so two waiting rooms were required. Shortly after the law was passed, a new station in Purcellville was built with white and “colored” waiting spaces. At existing stations, new walls were erected to cut waiting rooms in two. A few existing buildings had a men’s and women’s space and those were repurposed for segregation of the races.

NOVA Parks will unveil on Saturday a new interpretive sign about how Jim Crow laws affected passengers taking the Washington & Old Dominion (W&OD) train line in the 1900s, according to a Feb. 14 release.

The sign will be officially unveiled at 1 p.m. at the intersection of King Street and the W & OD Trail in Leesburg.

NOVA Parks owns and manages the W&OD trail, which stretches 45 miles between Shirlington and Purcellville on the former roadbed of the train line, which operated from 1859 until 1968. The interpretive sign draws from new research by NOVA Parks on the segregationist laws that regulated the W&OD passenger train service during the 20th Century.

In 1900, the Virginia state legislature passed a law that required separation of races in public spaces like trains, then the main form of public transportation.

“Racist laws and practices affected both passengers and employees on the Washington & Old Dominion Railway,” Randall said in a prepared statement. “Black Pullman Porters were paid a quarter that of their white counterparts and forced to answer to one name, George. Black passengers were given poor services and accommodations and treated with disdain. I appreciate NOVA Parks working to bring awareness to past atrocities.”

Named after a Black minstrel show character, Jim Crow laws perpetuated discrimination against people of color in the United States and were not overturned until 1964, when President Lyndon B. Johnson signed the Civil Rights Act. Many race segregation laws, however, stayed in effect until the late 1960’s in Virginia.

“NOVA Parks was created for and is dedicated to serve our many and diverse Northern Virginia communities,” Magennis Wyatt said.

“Unlike many park systems, our mission, in addition to creating places for recreation, is to ensure our shared historic places are conserved and our stories memorialized, even if those stories hold up a mirror to some of our worst moments,” she said. “As all can attest, today the W&OD Trail serves millions of visitors each year — visitors of every race, ethnicity and religion, and each citizen enjoys it with equanimity. But lest we forget, while this was a railway, that certainly was not the case.

“Indeed, it is important to remember that inclusion and justice were not often valued, in this part of the country throughout the first half of the 20th century, when discrimination was the law,” Magennis Wyatt said.

NOVA Parks has placed identical interpretive signs in separate locations along the trail in Arlington and Fairfax counties. The signs are part of an initiative to tell stories from Black history and tie in with a new theme in the NOVA Parks 2022-2027 Strategic Plan: Belonging.