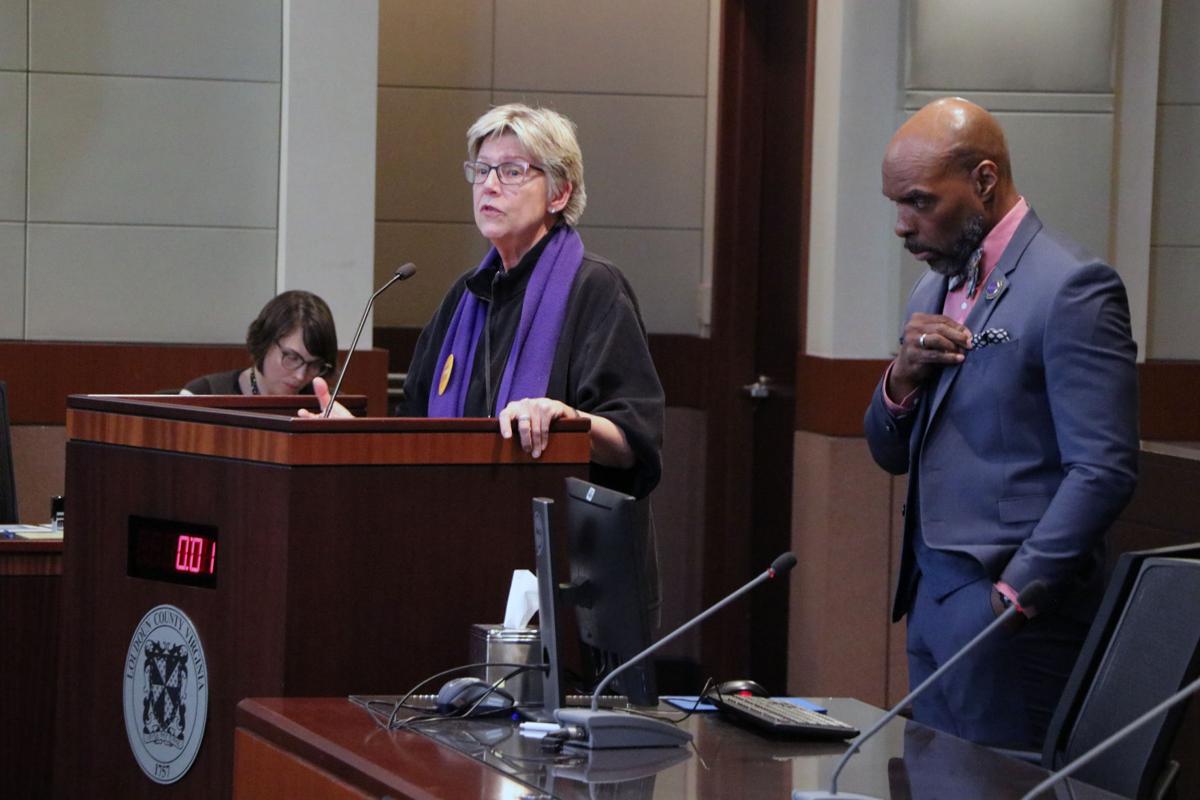 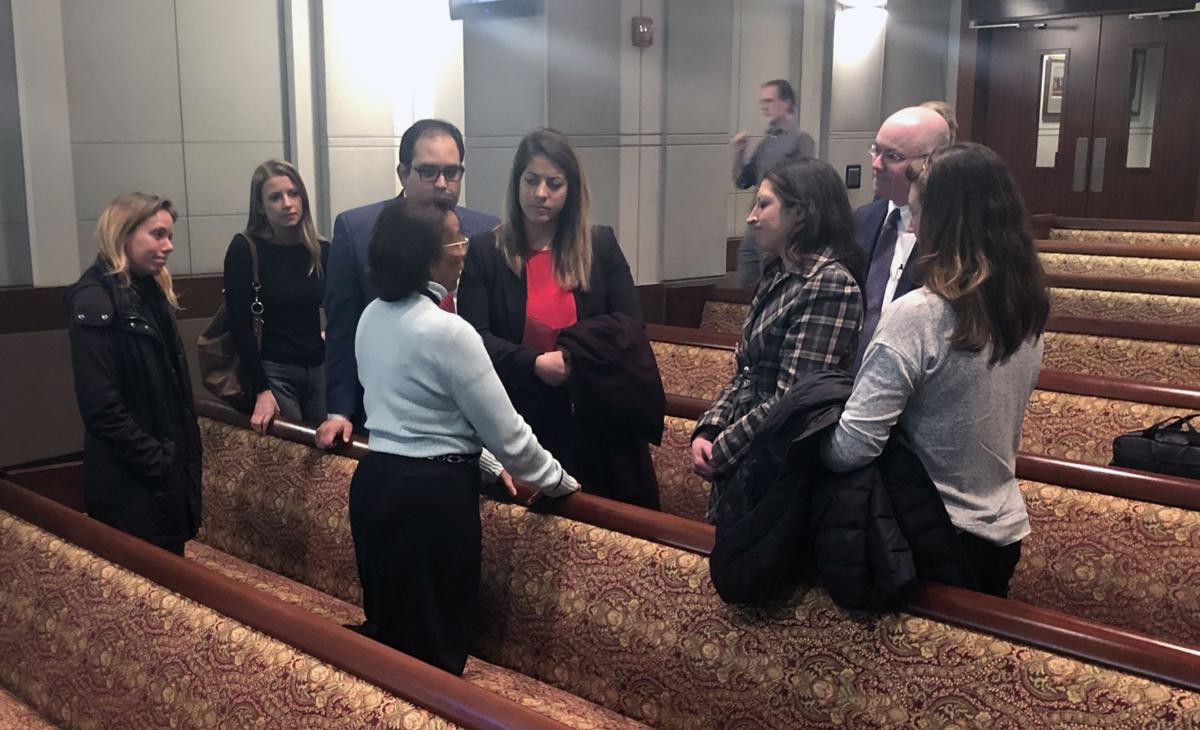 A mix of attorneys speak with Loudoun County Board of Supervisors Chairwoman Phyllis Randall (D) this month following a budget public hearing. The group is requesting nearly $200,000 to supplement salaries in the state-funded public defender's office. 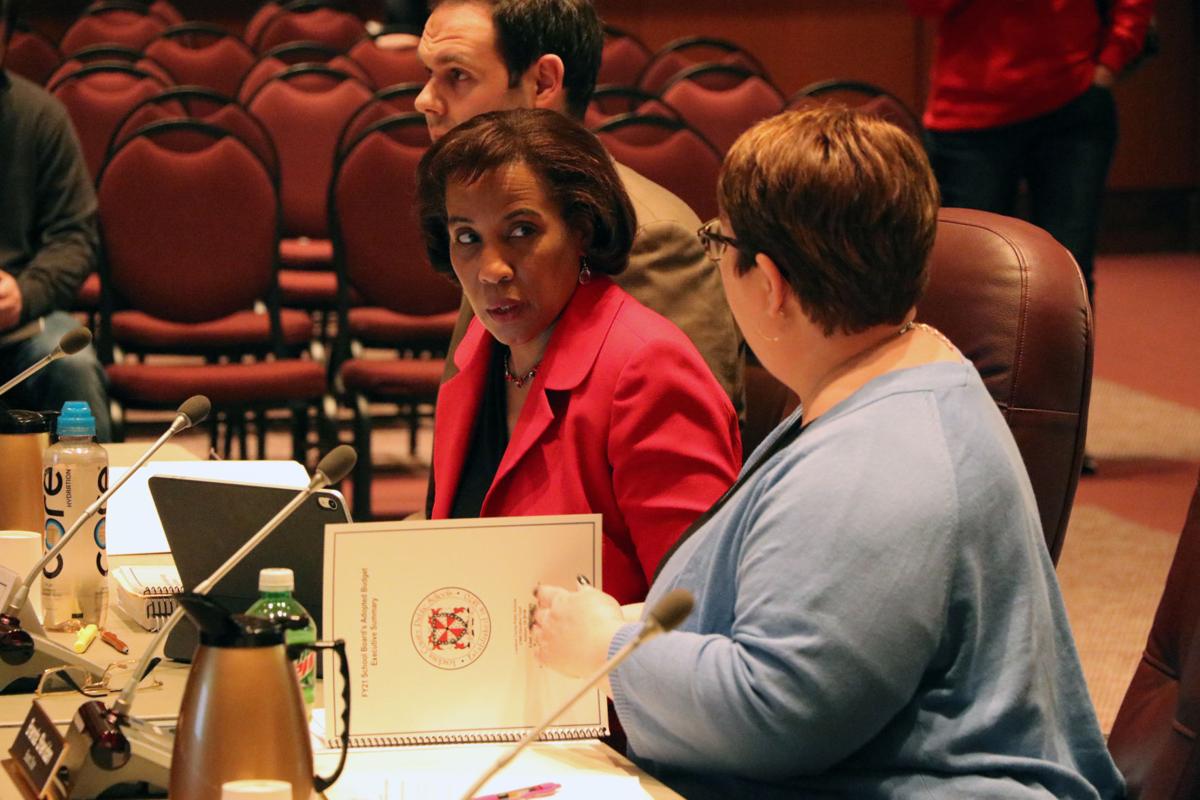 Advocates for the state-funded public defender's office in Loudoun County are pushing for an increase in salaries for attorneys.

The request was one of the highlights Tuesday to kick-off public hearings on the proposed fiscal 2021 budget totaling 3.024 billion.

“We are working to ensure that there is not recidivism — that we give people the support they need so that we can have them reenter into the community and I think it's such a noble cause,” said attorney Kelly King, who is a former member of the office.

King joined a mix of advocates — current and former members from the defender’s office — urging the board to support increased funding following the departure of attorneys due to the region's high cost of living.

If the board can’t supplement the requested amount of $197,788, former office members believe more departures will come.

“These are talented attorneys that this community is at risk of losing, because they can't be compensated for the service they provide to the citizens of Loudoun County, and I ask this board to compensate,” former office member Barry Zweig said.

Loudoun Chamber Vice President of Membership and Government Affairs Grafton DeButts encouraged the board to increase funding for the Housing Trust Fund.

“If we can increase the housing supply, the barriers around this community to live in work alone shrink," DeButts said. “I ask that you would consider not just keeping up with the region, but leading the region and removing these barriers through your investment and Housing Trust.”

Tuesday's hearings lasted for an hour and half. County Administrator Tim Hemstreet's proposed budget was introduced earlier this month.

Hemstreet said his spending plan is balanced at the tax rate at $1.035 per $100 in assessed value -- one cent less than the current tax rate of $1.045 -- based on the final assessment portfolio from the Office of the Commissioner of Revenue.

The proposed budget does not carry the equalized tax rate – that which keeps taxes steady for the average homeowner. The equalized rate for this coming budget year is $1.01.

Supporting the Capital Improvement Program (CIP) and addressing employee pay are among the priorities the administrator presented to the board earlier this month. The county is also opening new facilities, supporting board initiatives and addressing various departments’ top priorities.

“... People don't eat in the long run, they eat day to day — so we need our money and we need it now,” Reynolds said.

Chapter Chairwoman Patti Nelson, also a county worker, added, “This board has an opportunity to build on Chair Randall’s leadership in the last two budgets, to use this year’s budget to invest in our people. We love what we do. We’re not here to get rich, but we need to be able to take care of our families and we need resources to do our jobs well.”

SEIU leaders thanked the board for supporting Senate Bill 939, which allows collective bargaining through local option. The board supported the measure 6-2-1, with supervisors Tony Buffington (R-Blue Ridge) and Caleb Kershner (R-Catoctin) in opposition. Dulles Supervisor Matt Letourneau (R) was absent for the vote.

On Monday, supervisors met with the School Board and school system staff for the annual budget presentation, where they discussed staffing standards, student enrollment growth and enhancements and reallocations.

The school system's upcoming budget is $1.38 billion — a 7.6 percent increase compared to the current budget. The School Board is projecting to receive $19 million from the state and is requesting a 10.8% increase of county funds at $78.3 million.

The county budget appears to be approximately $2.5 million short of the schools system's $952 million request from the county.

The highest increase in expenditures comes from enrollment growth, which is expected to rise by 2.4 percent. Furthermore, the additional 44 full-time, non-teaching positions for the new Lightridge High School is valued at $3.3 million.

The board will hold its final county budget public hearing Feb. 29 at 9 a.m. in the Loudoun County Public Schools Administration Building at 21000 Education Court in Ashburn.

John Battiston contributed to this report.

The article doesn’t say Public Defenders make $197K per year. It says the budget request for increased salaries (plural) is $197K. Meaning, that amount is to increase the entire attorney staff’s salary. If 10 attorneys, they’d each see a salary increase of $19,700.

One cannot say they’re underpaid or overpaid based on the information in this article. FWIW, as a long-time Govt attorney (federal, now retired), I’d guess it’s underpaid. However, as others have pointed out, the public defender position is usually an entry-level type job for attorneys, and if you don’t like your job (feel you’re underpaid), leave and go get a different/better job.

Dems control board now. Hold onto your wallets!

Loudoun county lawyer getting paid $197,000 is hardly 'not enough support', in fact is likely top 10% pay compared to all lawyers, and asking for further pay raise for Gov't employees while increasing county residents' taxes when residents are already paying highest mortgage rates in the country (on average) is demoralizing and extremely ludicrous.

Why don't public defenders earn similar amounts to what prosecutors earn? In both cases the case load is substantially higher than what a defense lawyer would carry at a much higher rate per hour (per minute :-) ) BUT both gov't paid category of lawyers get paid on snow days, federal holidays, get paid vacations and would be paid if the courthouse was shut down for a virus outbreak but not the defense lawyer. The margjnal utility of labor is what is supposed to be used to make such decisions not political pressure by lobbyists!!!

I don't believe, correct me if I'm wrong, that all the public defenders make the same rate, or even the Public attorneys. It is probably based on tenure, cases won or something like that.

I just read in the Patch that the starting salary for teachers in Loudoun is the highest in the state. I doubt they will have trouble filling the positions! The school system wastes so much money - time to tighten up a bit!

Yup. That is what happens when you have spouses of teachers on the board and no oversight (or even compliance with ethics laws).

Looking at the state as a whole, average annual teacher salaries vary widely, from a high of $81,129 in Arlington County to a low of $39,567 in Grayson County Public Schools, a school district in southwestern Virginia. (this February) I think the patch may have been using the highest starting rate with a masters degree.

Amerigirl - most teachers now have masters degree but what they stated was without a masters.

Pay more for public defenders? I don't think so. If the job doesn't pay enough, find a new job working for a law firm. Government salaries have never been rewarding and they never will be. If money is your goal, seek employment in the private sector.

One of the bedrocks of our justice system is that everyone is entitled to representation. We need to fill these positions to ensure that our legal system is balanced.