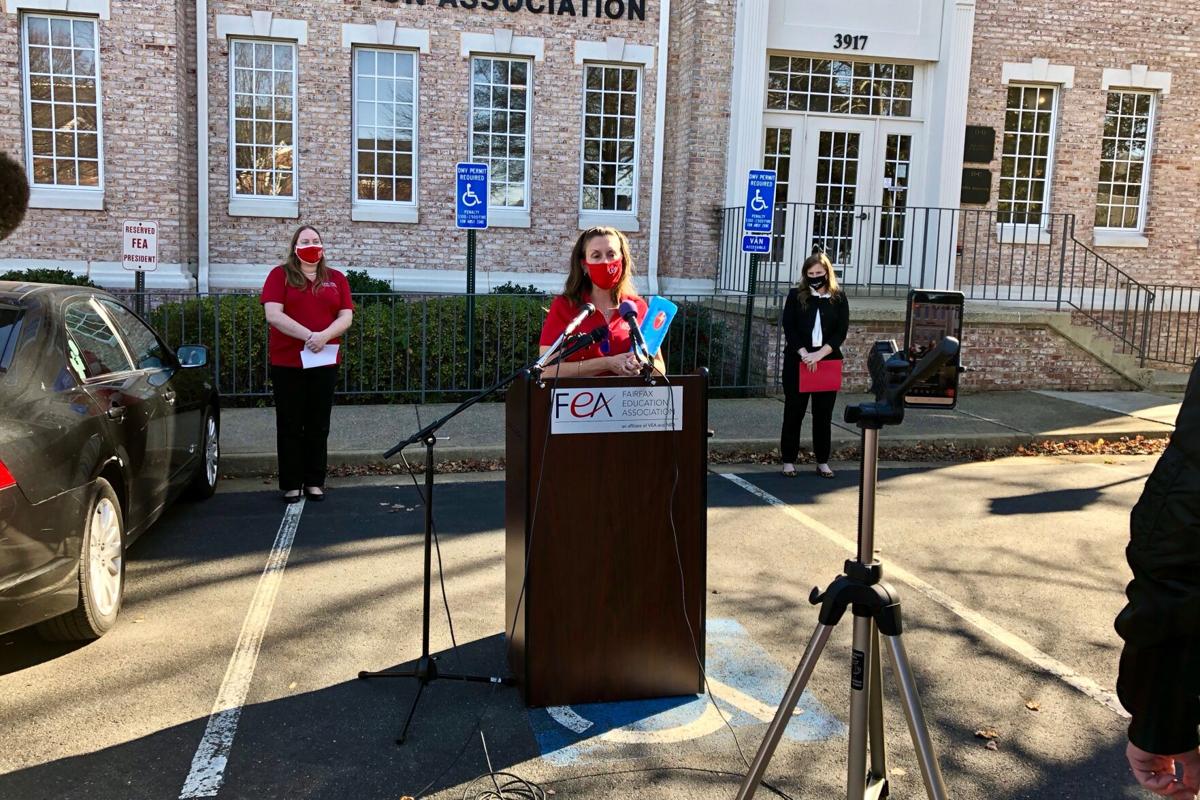 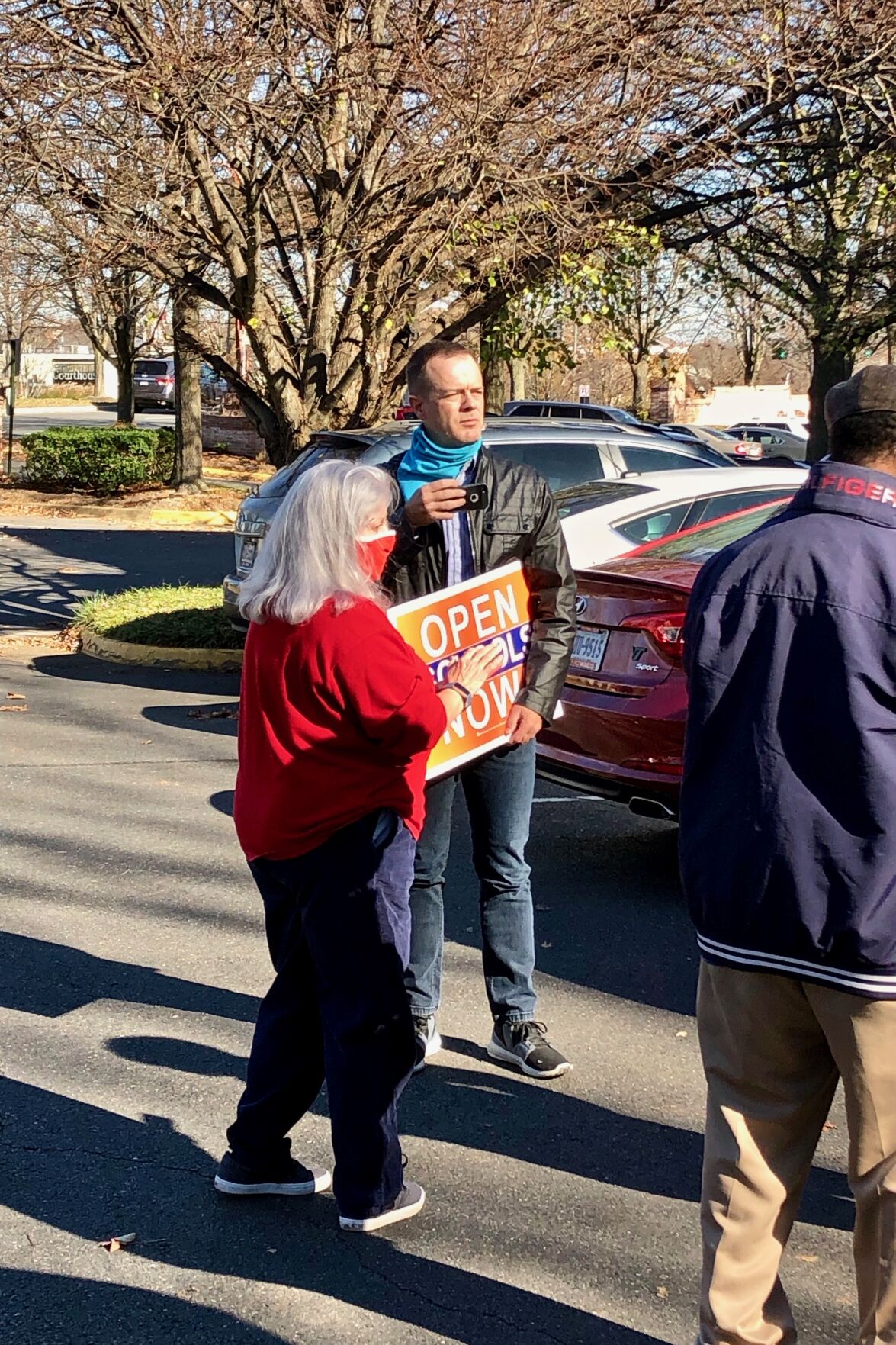 Leaders of northern Virginia education associations including the Loudoun Education Association gathered Monday morning in Fairfax to publicly urge Gov. Ralph Northam (D) to provide guidance for schools regarding the recent uptick in COVID-19 cases both in the commonwealth and nationwide.

As of Monday morning, Loudoun had averaged 69 new cases and two hospitalizations per day over the past week. The county's percent positivity rate has reached nearly 9 percent, while the statewide positivity rate is 8.6 percent.

Northam on Friday introduced new, statewide restrictions on public gatherings and certain businesses in hopes to quell the surge in positive tests, effective Sunday at midnight. These regulations include reducing the limit on public gatherings from 250 people to 25, prohibiting alcohol sales in dining establishments after 10 p.m. and requiring all children ages 5 and up to wear protective face masks.

All present representatives — including figures from the Arlington, Loudoun, Manassas and Prince William education associations — endorsed a return to fully virtual learning "until case rates return to a downward trend and remain below 5% ... as indicated by the [Centers for Disease Control and Prevention]," according to a Sunday press release.

"We know how critically important it is to protect our community and our students and staff from COVID-19," she said. "We must stand united to push back against this rapid increase in the virus. Governor Northam must provide leadership for our schools in addition to the guidance he has given to our businesses and public spaces."

As approved by the Loudoun County School Board last week, LCPS plans to continue its ongoing process of implementing a hybrid learning option for all students on Dec. 1, when such an option will become available for grades 3 through 5. Currently, all children in grade 2 or lower are able to participate in part-time in-person learning, as well select students of other ages.

Loudoun Education Association President Sandy Sullivan followed Adams, arguing that while local educators "want to be back on their sites" and "are working harder than ever before," safety for the entire Loudoun County Public Schools community should be a top priority for both the state government and school system senior staffers on the local level.

"As much as our educators want to be back in person, it is critically important that this is done in a safe manner — safety for all our students, all of our educators and all of our families, our community," Sullivan said.

"It's already safe," he said during Sullivan's remarks. "You're leaving kids behind … Private schools are open everywhere."

Adams and other FEA staffers asked the protester to leave the parking lot, saying he was intruding on private property, to which he responded, "I'm in a parking lot." When one FEA representative continued to confront him in an attempt to guide him off the premises, the protester said, "Get out of my face. I'm backing up. Why are you coming toward me?"

After a few minutes, onsite workers called authorities, but the protester left the scene before police arrived.

The incident demonstrated ongoing tension between local educators and parents: While many of the former are hesitant to return to a physical classroom environment out of ostensible concern for their own safety, some of the latter remain adamant that students' need to receive in-person education is paramount.

While it is unclear whether Monday's protester is associated with any particular organization or movement, his rhetoric closely mirrors that of participants in the "Honk for Back-to-School" rallies that have taken place outside the LCPS administrative building before the last four School Board meetings.

In response to an attendee question, Sullivan said LEA has not determined a specific set of coronavirus-related metrics it would consider acceptable to move forward with opening schools.

"What we would like to see is our School Board set a metric that is reasonable and safe for all," she said, adding LEA is not of the opinion that the introduction of a successful vaccine is essential for a return to classrooms.

She continued, "CDC guidelines are the only ones that they've been given. We don't have state guidance or metrics, which some other states have adopted, so we would encourage the governor and the Virginia Department of Health to look to develop those metrics beyond the CDC guidelines."

Later Monday, Fairfax County Public Schools announced it will delay its next phase of increased in-person learning from Nov. 17 to Nov. 30 due to worsening health metrics.