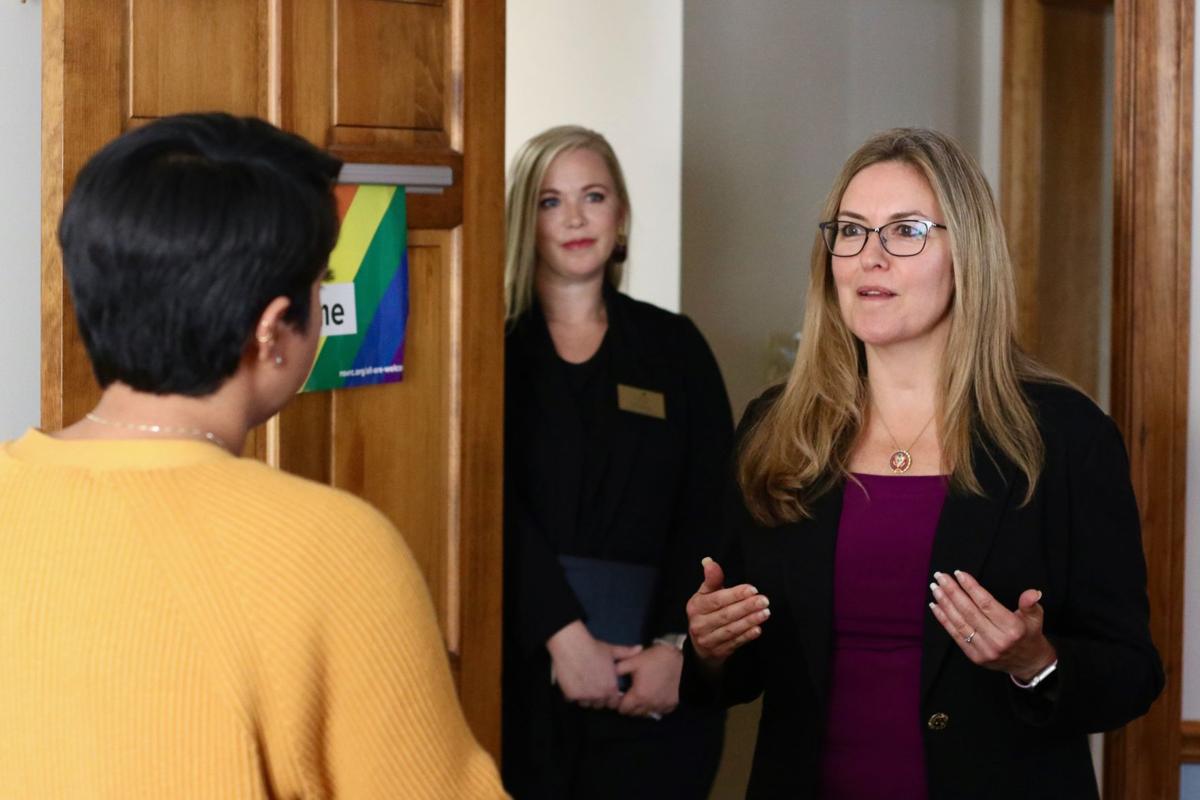 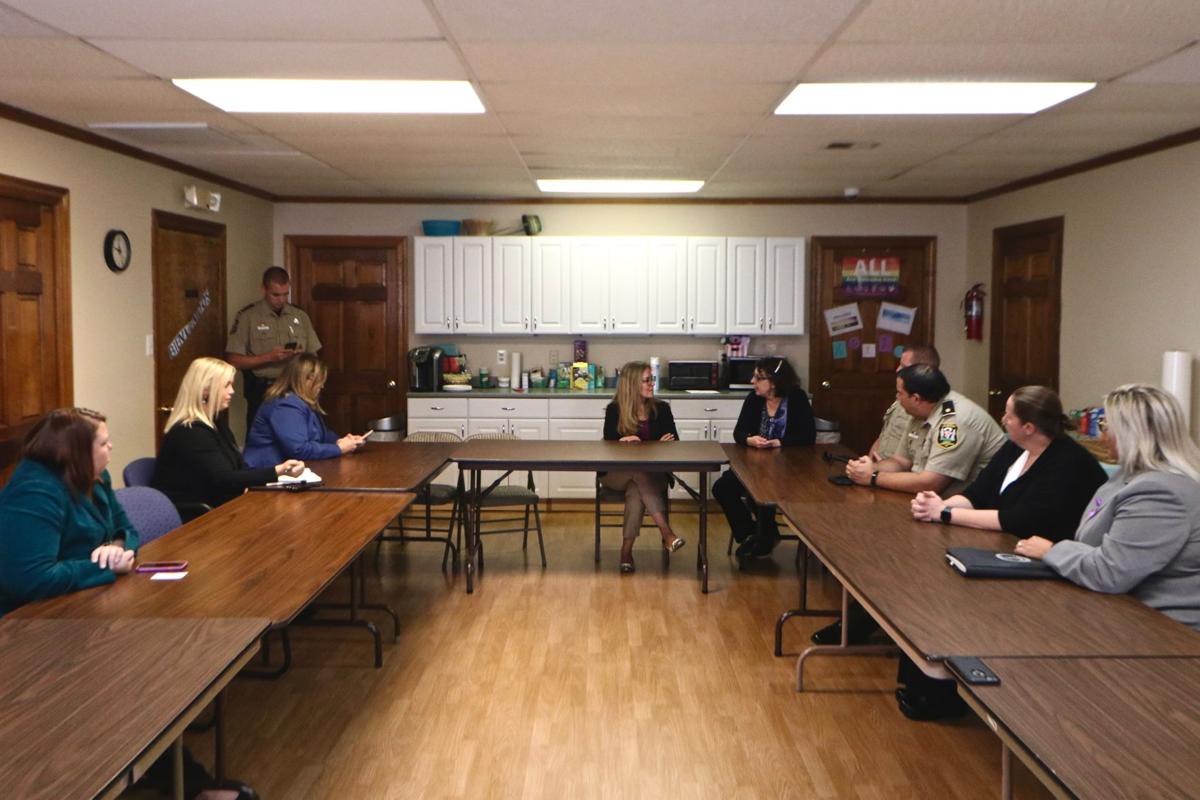 Rep. Jennifer Wexton (D-10th), center, engages with local leaders on the county's triumphs and challenges in caring for victims of domestic abuse. 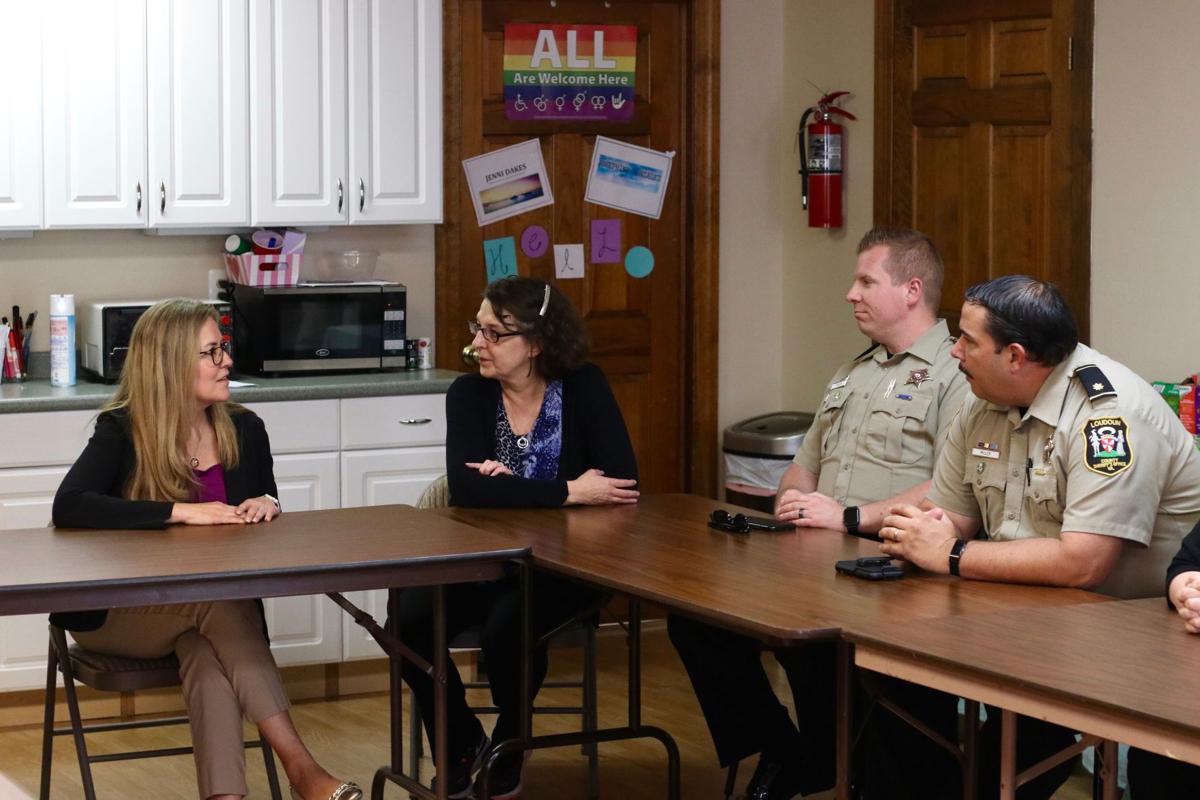 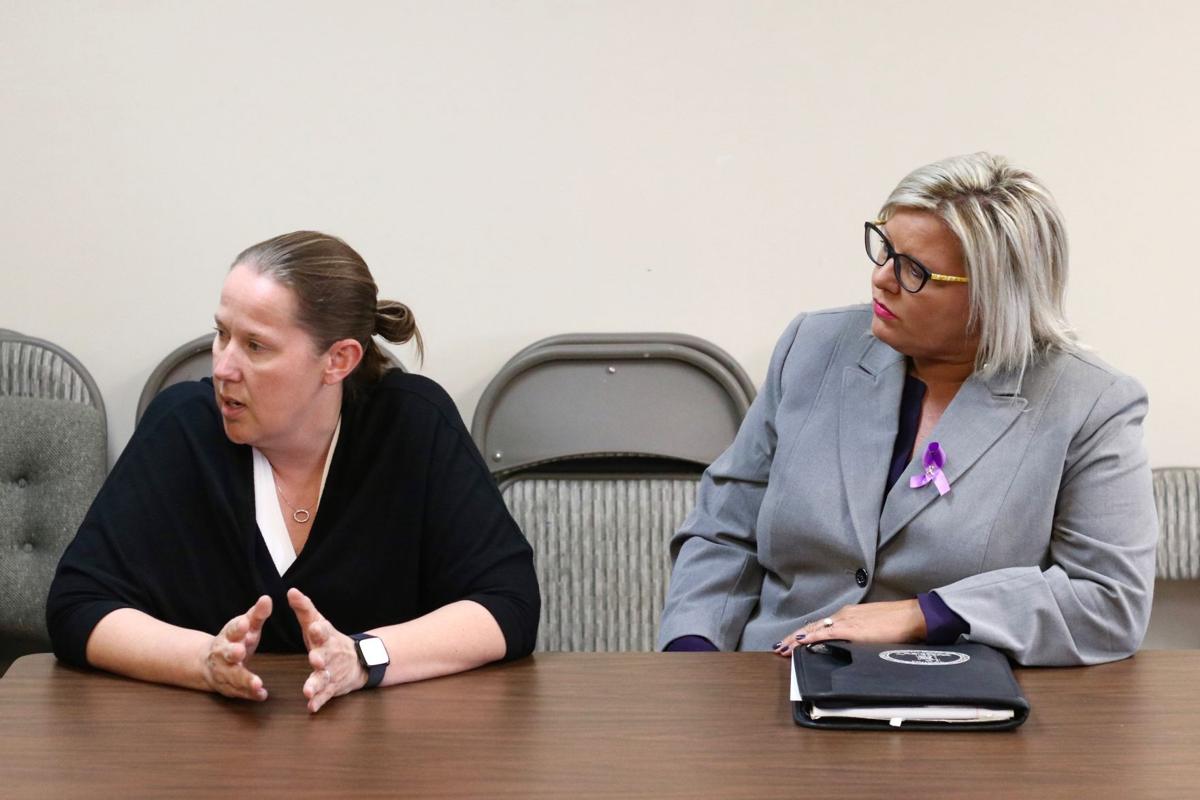 Wexton — who earlier this year in Congress supported the reauthorization of the Violence Against Women Act, or VAWA — took part in a roundtable discussion focused on supporting survivors, holding abusers accountable, and the ways LAWS and other organizations in Loudoun County work toward those goals.

After receiving a tour of the shelter, Wexton sat down with members of the Loudoun community responsible for promoting and upholding the safety of abuse victims. LAWS Executive Director Judy Hanley emphasized the importance of community and legislative support for the shelter, as she and her coworkers aim to never turn away any victim seeking care.

These clients are most often adult victims of domestic violence, but can also include child who have witnessed or suffered abuse, she said.

The shelter’s goal is to move victims to new, safe housing within 30 days of check-in. This can be rather tricky, as LAWS in the past has lacked the funds necessary to help victims make the transition to new homes. However, the organization recently received a grant — much like those made possible through VAWA — to aid in such services.

“We have, multiple times, seen people come into our shelter, and 60 percent of the time they go back to their abuser because there’s no other options. So we received a federal grant this year — for the next two years — where we have money to transition people from our shelter into their own apartments,” Hanley said. “It’s very exciting.”

LAWS has made efforts to promote its services to abuse victims who are part of underrepresented people groups, including anyone under the age of 18 or over 55, those who suffer from disabilities, Asian Americans and African Americans, and plans to make adjustments to make the shelter ADA compliant.

Leesburg Police Department Criminal Investigations Commander Jaime Sanford added that while LPD wishes to serve all survivors regardless of citizenry, undocumented residents who suffer from abuse often hesitate to reach out for assistance.

“We have seen a number of victims that won’t even call the police because they’re concerned about their status,” Sanford said. “When it comes to victims of a crime, I don’t care about their documented status. I want to help them in whatever way we can.”

Sanford added, “It’s hard when we can’t get people to call the police because they’re afraid that when we get there we’re going to immediately call [Immigration and Customs Enforcement].”

When Wexton asked whether assistance is provided for survivors without driver's licenses, independent credit or general financial literacy, Hanley responded that such provisions are sometimes “challenging” to pull off. LAWS relies on partnerships with local churches to provide assistance when needed.

“If it gets to the point that they’ve done everything and they’re still not successful, we reach out to our partners in the faith-based community to see if there’s additional resources that they will help with. Our faith-based partners are awesome,” Hanley said.

“Thank you guys so much for all you’re doing,” Wexton said in closing. “Hopefully I can take your concerns with me and see what we can do in terms of getting you some resources.”

Why isn't she working towards equality for all - and discuss violence perpetrated by women against men? hardee har har - we all know that women don't abuse men, ever, at all, in any way.

Are there so many abused men that they have to open shelters to care for them? What makes you think that she isn't concerned about all types of violence?

Another do nothing person part of the resistance that has done absolutely zero for americans in their time with power....collusion delusion, followed by "whistleblower" that turned out to work for Biden....Adam, piece of Schiff lying in the peoples house while reciting a fantasy description of Ukraine call....on and on....IG report to be out Friday according to my sources.....buckle up, this will be a opening shot until Durhams knock out....if the truth will ever see the light of day....time will tell....

Did you copy and paste this from a Trump tweet?

Why do you call her do nothing just because you don't bother to find out what she has done? Just hateful. Everything you said are just trump rally talking points, try to prove any of it, the man's a pathological liar.

You mean Wexton actually showed up in her district? She is an absent Congresswoman elected only by people voting down the party line. She is such a hypocrite in everything she says. No Action Wexton

must be confused on the time of year to be seen for votes.

Lies compounded with more lies, please understand how congress works. They do not stay in their districts; they work on Capitol Hill. They visit during recesses to hear from their constituents. She has met with her constituents during every recess. If it is only people voting party lines then how did Comstock win before when Clinton took her district but Wexton beat Gomstock by 13% ? I bet you vote party line. If you are going to tell lies like her being a hypocrite you should try to back it up. You got nothing, right? No Action, well that’s a blatant lie. She spent her first month in office fighting to reopen the government and assisting constituents impacted by the 35-day shutdown. During her first 100 days she co-sponsored 78 bills, voted 167 times, had 30 committee meetings, made 1,850 calls on legislative issues, and gave13 floor speeches, According to FiveThirtyEight's congressional vote tracker she has amassed one of the most progressive records in Congress. In August, Wexton formed a new congressional caucus to examine and promote agritourism, which she believes could bring economic and social benefits to areas like Loudoun Valley. She is in 3 caucuses. Just because YOU don’t know what she is doing doesn’t mean she isn’t busy.

She is an absolute crazy woman!! Look at her eyes!! Frank Wolf is disgusted as to what has happened to his district. Comstock destroyed it. We need to take it back in 2020!!

Crazy is raising your hands to the sky and saying “I am the Chosen One.” or claim that Israelis "love him like he is the second coming of God.".Crazy is saying "I know more about ISIS than the generals do." Or thinking that you are so above the law that "I could stand in the middle of Fifth Avenue and shoot people and I wouldn't lose voters."

You want to criticize someone looks, that's pretty low? There is nothing wrong with her eyes, it must be your sight, or your more like trump who thinks no one is as great as him. Who cares about what Wolf thinks, he is old and passe. He was good in his younger days, I voted for him, but he should have quit earlier. He needed to care for his wife, and though he tried to both it didn't work. I hope your not holding you breath for 2020.

Did she think Ben Carson for keeping men out?

What does that even mean? He has nothing to do with it.

Not sure how this is news worthy. Seems like pro-Wexton campaign plant.

Loudoun. We can do so much better that this for our Congressman.

Newsworthy because it's Domestic Violence Awareness Month. She has shown herself to be a strong Congresswoman who has had a very hands on approach and introduce lots of legislation.