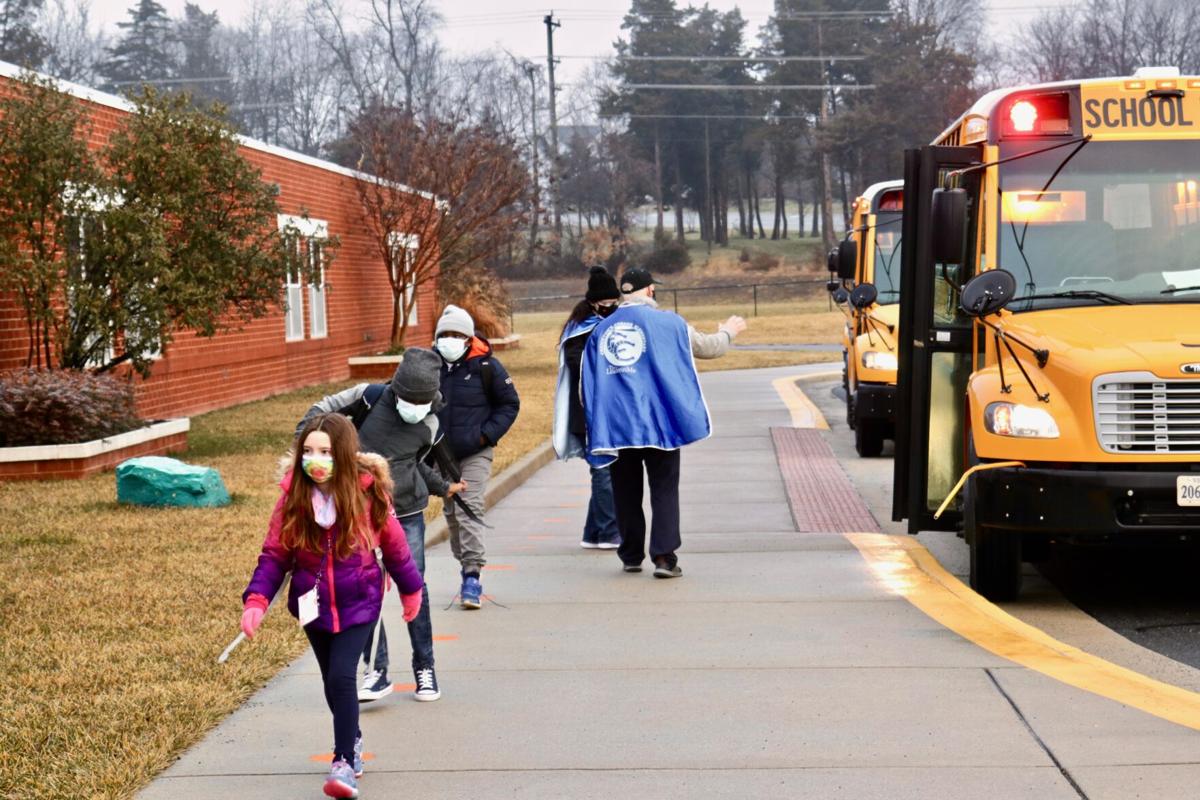 A small, physically distanced group of students walk from their bus into Creighton’s Corner Elementary School in Ashburn on Feb. 16 — their first time doing so in more than two months. Many staffers wore capes as a fun way to celebrate the return. 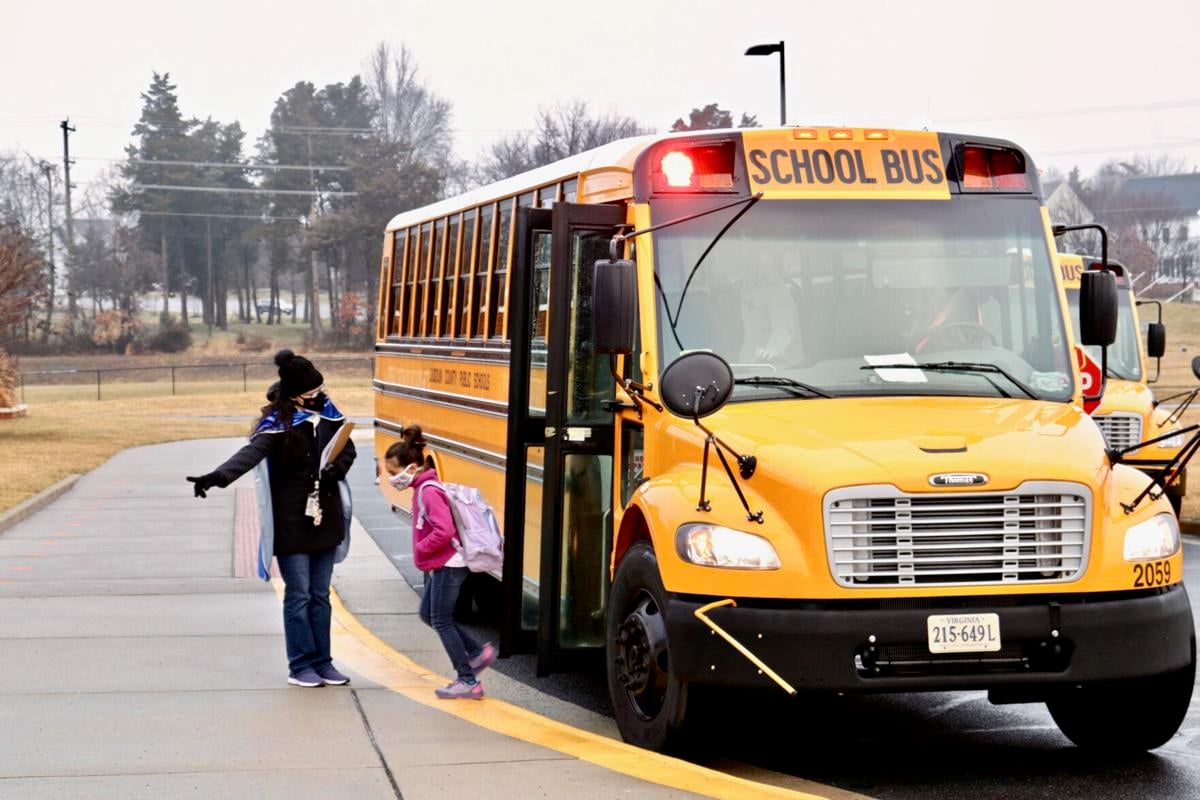 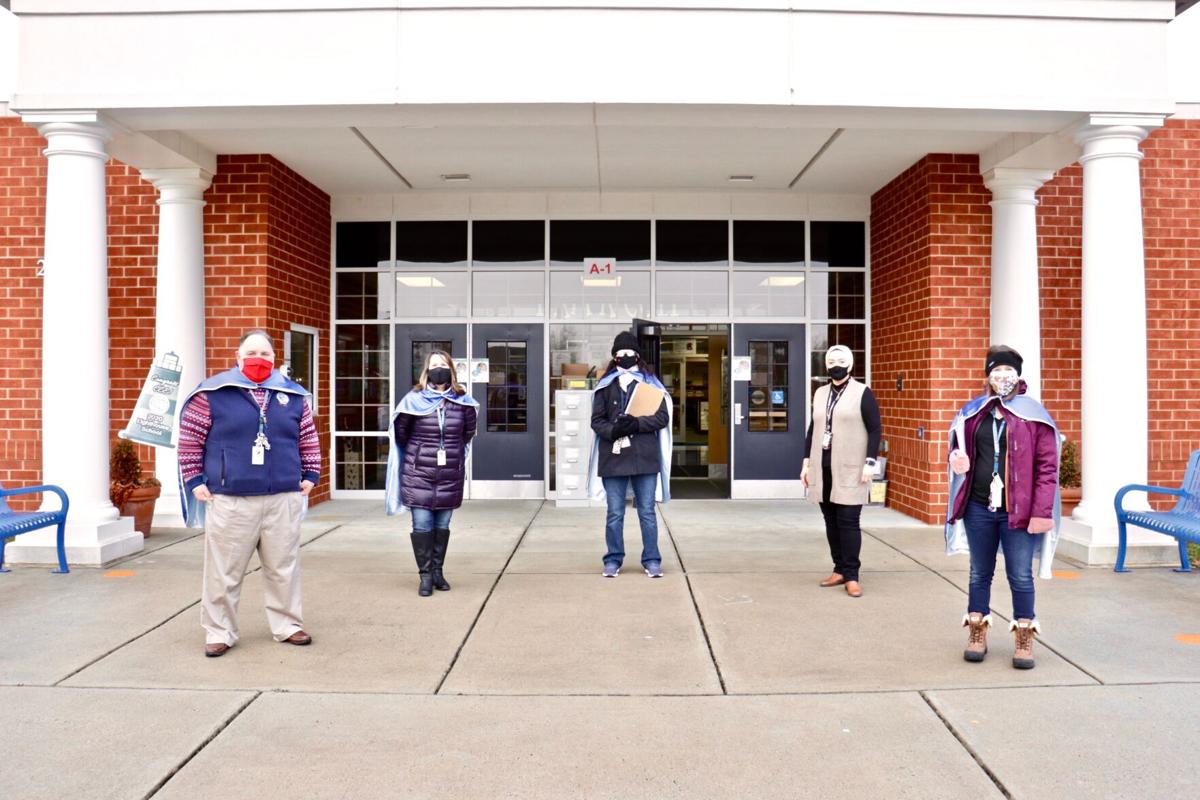 From left, Creighton’s Corner Elementary School Principal Chris Knott and staffers Melissa Thorne, Janet Davidson, Zeena Taher and Sydney McLelland ready to head into a day of teaching. Many teacher at staff at the school decided to wear capes to celebrate the return to the classroom.

A small, physically distanced group of students walk from their bus into Creighton’s Corner Elementary School in Ashburn on Feb. 16 — their first time doing so in more than two months. Many staffers wore capes as a fun way to celebrate the return.

From left, Creighton’s Corner Elementary School Principal Chris Knott and staffers Melissa Thorne, Janet Davidson, Zeena Taher and Sydney McLelland ready to head into a day of teaching. Many teacher at staff at the school decided to wear capes to celebrate the return to the classroom.

The saying goes, “Not all heroes wear capes.” But as Loudoun County Public Schools approached its reimplementation of hybrid in-person learning on Tuesday, Chris Knott, principal of Creighton’s Corner Elementary School in Ashburn, thought to himself: Why not?

As shorter-than-usual lines of cars and sparsely-filled buses dropped students off Tuesday morning for their first day back in the building since December, teachers and administrators stood ready to greet their long-awaited students — each donning a blue cape with the Creighton’s Corner logo. Even those who would be teaching virtual classes were given capes to proudly wear in their virtual classrooms.

“It was just a neat thing to honor them, to excite our kids and to get a good start to school,” Knott told the Times-Mirror. “We just wanted to come back with a good, positive attitude so everybody is set, ready to go.”

All LCPS students who selected the hybrid model and are in the first three stages of the school system’s reimplementation plan will spend two days this week learning in person. Stages 1 through 3 include all elementary students, pre-K, preschool and kindergarten, as well as select special-education students, English learners and Academy of Loudoun attendees. Stage 4, which consists of all middle- and high-schoolers, is set to begin hybrid learning March 3.

LCPS steadily rolled out its hybrid model starting in October 2020, and by the beginning of December, Stages 1 through 3 had been successfully launched. However, due to a spike in Loudoun County community transmission of COVID-19, the Loudoun County School Board chose to return all students to full-time virtual learning Dec. 15. The board eventually elected earlier this month to reimplement hybrid learning, due to updated guidance from the Centers for Disease Control and Prevention that emphasized school-level health mitigation strategies over community-based metrics.

According to Knott, 257 of Creighton Corner’s students — only about one-quarter of its enrollment — chose to engage in hybrid learning, while about 43 percent of elementary students across the school division have chosen to do so. He said having such a small portion of the student body walking through the halls and sitting in classrooms at a time makes the enforcement of physical distancing, mask-wearing and other health mitigation strategies relatively easy, though it is as important as ever to remain vigilant.

“You just know that in a building full of children, they’re going to get close to each other,” he said. “When they’re standing here lining up, we’ve got orange dots and everything … but every now and again they’ll get close to each other and we’ll have to remind them. If we had half of our student body [in the building at once], that’d be much more difficult to practice.”

Still, Loudoun County’s youngest learners are, for the most part, more than capable of adapting, even eager to do so.

“The kids were great. They were even better this second time around, because they kind of knew the expectations,” Creighton’s Corner second-grade teacher McKensey Ziegler said after her students went home Tuesday. “They have their typical questions like, ‘Why this?’ but honestly they’re just interested.”

Cheryl Creech, who also teaches second grade at the school, has a couple of students at a given time who act as “Class Ambassadors,” greeting guests when they enter the classroom. Without being instructed, one of them made adjustments to the usual greeting procedure on Tuesday in order to adapt to the physically distanced environment.

“When I had an administrator walk into the classroom, my student knew he couldn’t go up and shake their hand and welcome them the way we would’ve done pre-COVID, but he got out of his seat, he stood up, he looked her in the eye and he said, ‘Welcome to our classroom,’ and introduced himself,” Creech recalled. “He didn’t miss a beat knowing he could still greet her from a distance and do it in a respectful way.”

She added, “If you would’ve asked me a year or two ago how second-graders would do with this many changes to their way of life and their way of learning, I would’ve never dreamed that they would’ve done so well. They’ve blown me away with their positive attitude and just how excited they are about being in class.”

Knott and his teachers remain hopeful that that excitement is not short-lived, but with the unpredictable nature of the ongoing pandemic, educators must be prepared to revert to fully virtual learning at a moment’s notice. But overall, the Creighton’s Corner staff seem optimistic about the coming months of school, and at the very least they are doing their best to enjoy the opportunity to finally be in-person with their students once again.

“I think the most important thing is showing these kids that, no matter where we are, we are learning, we are a classroom family and we will get through this together,” Ziegler said. “We’re all doing the best we can.”