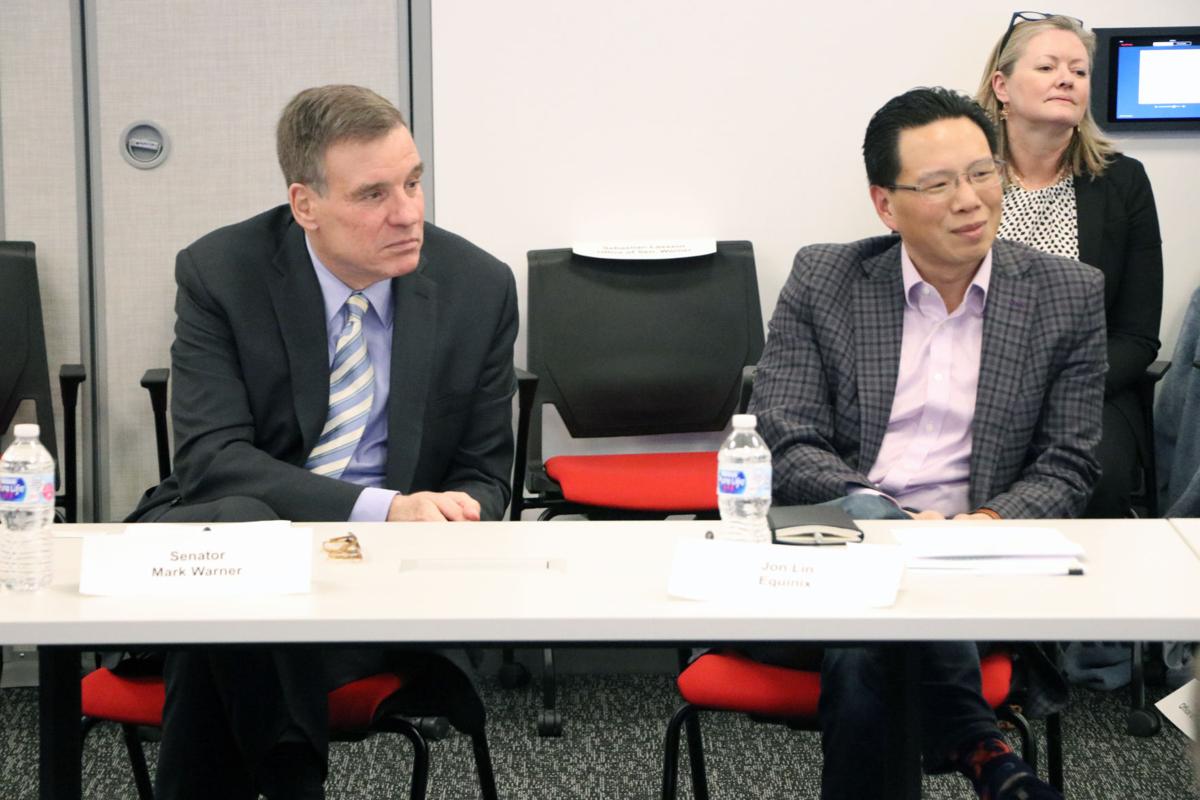 From left, U.S. Sen. Mark Warner (D) and Equinix President of the Americas Jon Lin listen to senior leadership from data centers across Loudoun County discuss the economic impact of the data industry at a roundtable on Feb. 28. 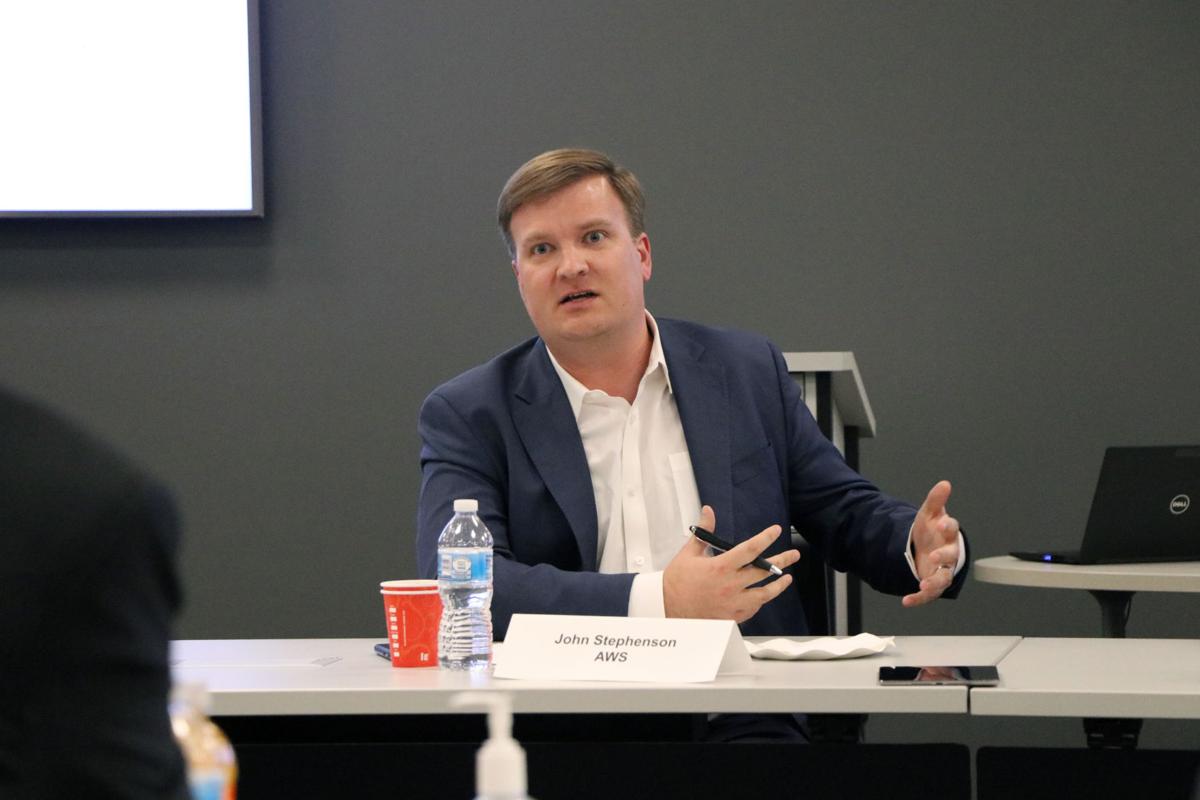 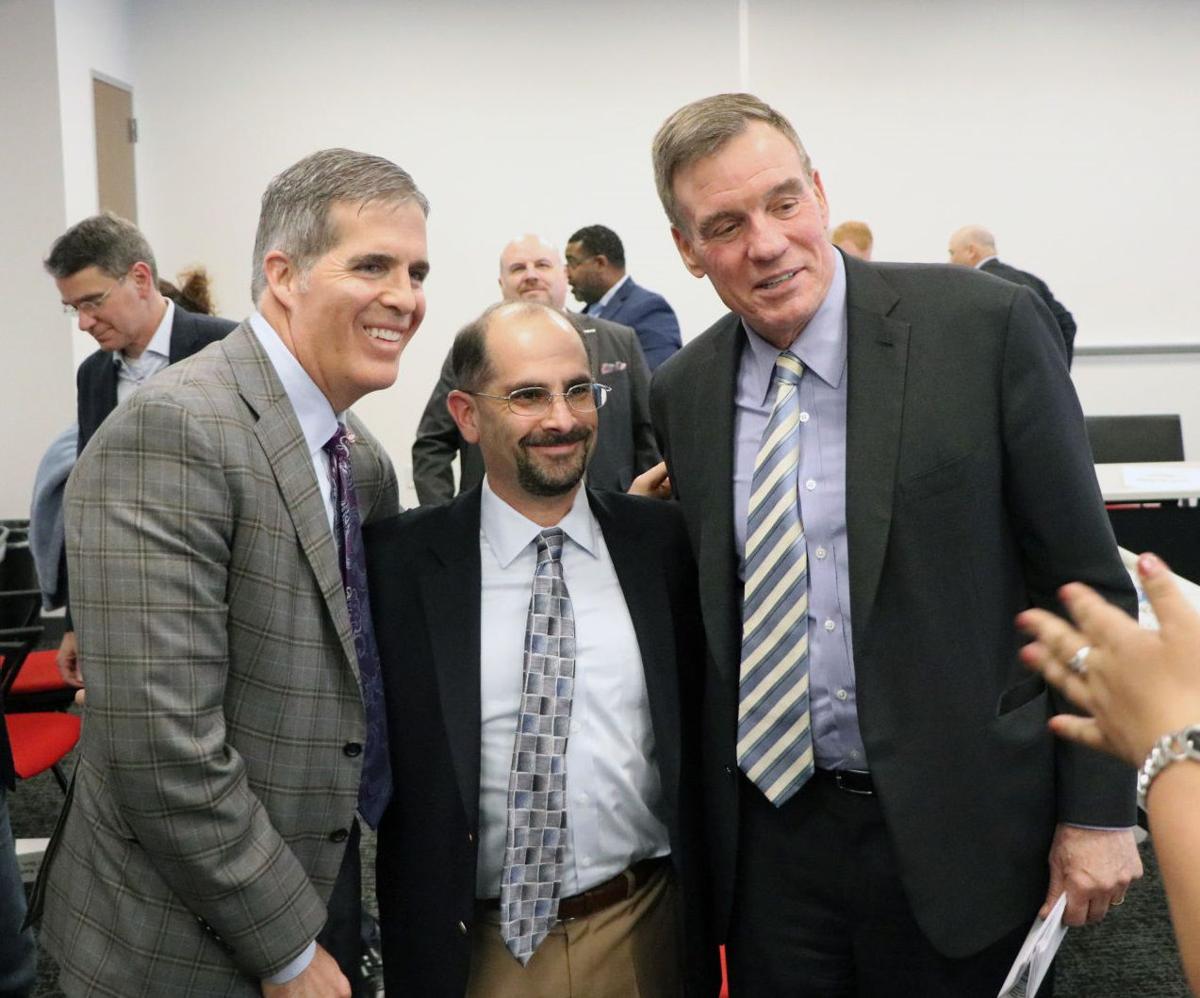 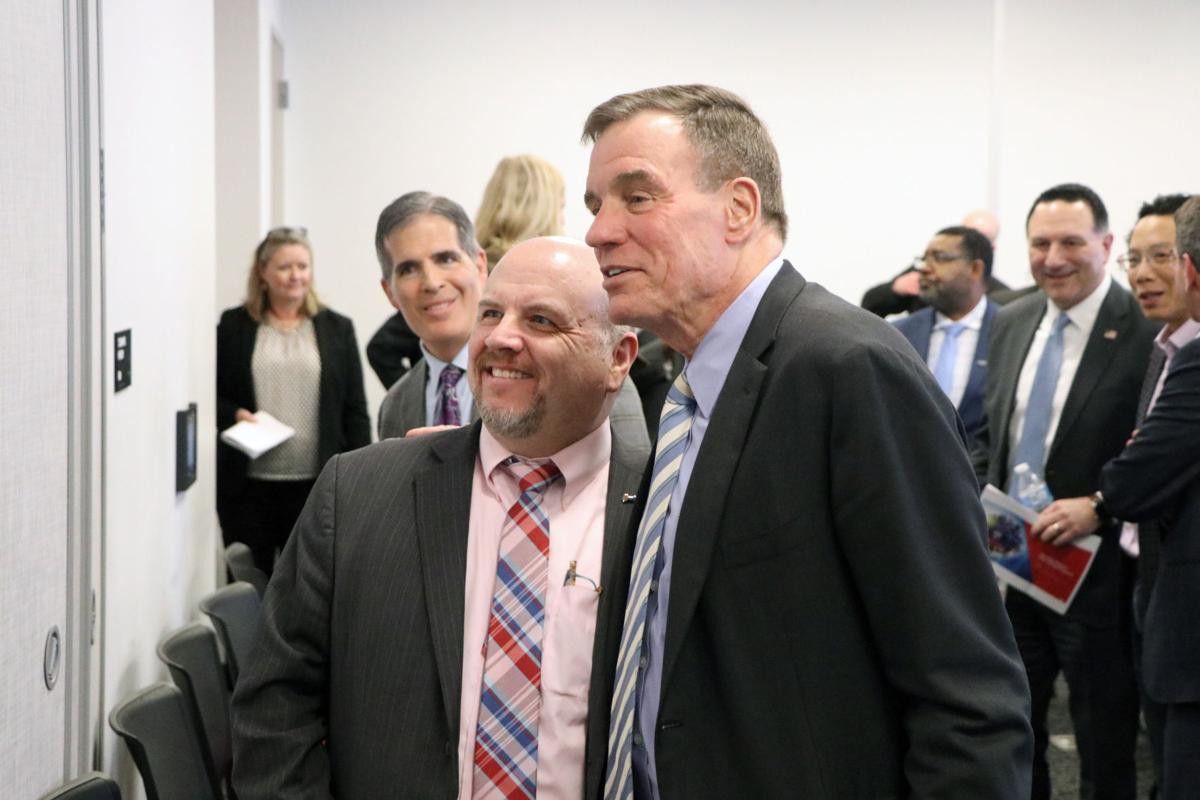 Data Centers have become a revenue and employment source for Virginia localities, and U.S. Sen. Mark Warner (D-Va.) believes the industry could be a new economic driver for the commonwealth.

He offered those comments Friday during a roundtable with county officials and leadership from data centers in Ashburn.

“If any of you would ever be willing to look at southside or southwest, I will move heaven and earth in terms of state and federal incentives,” Warner said following a lengthy conversation at the Equinix Data Center.

With customers having the need for more data space, the group discussed companies growing their operations and investing beyond the northern Virginia data center hub. Microsoft is one example, expanding its operations into Mecklenburg County near the North Carolina border and creating more than 100 new jobs, according to reports. Microsoft is also reportedly building data centers in Leesburg at its property in the Compass Creek development.

According to recent estimates, more than 70% of the world’s internet traffic passes through Loudoun’s digital infrastructure, making the data center industry an important economic tool and job creator in the region.

In January, Sen. Warner and a bipartisan group of national security senators introduced legislation to encourage and support U.S. innovation in the race for 5G, providing more than $1 billion to invest in western-based alternatives to better compete against Chinese equipment providers like Huawei.

One subject that grabbed the group’s attention was community relations and addressing environmental and aesthetic concerns with data centers.

Loudoun County Economic Development Director Buddy Rizer said the industry has evolved over the years, including an increased effort to build on community outreach by preserving the environment, improving designs, providing tours and working with schools and universities.

“It has been an education campaign on behalf of the industry, on behalf of NVTC, on behalf of the county government to try to educate those answers and tell that story in a way that I think has made a difference,” Rizer said. “I think we've gotten through the worst of it, and I think that by and large people have started to understand what that impact is and what it means, and we just have to make sure that we continue to keep that environment strong.”

QTS Data Centers Chief Hyperscale Officer Thomas “Tag” Greason added, “Normally, data center companies don't put their names on their buildings. They don't say anything about what's going on. It's very secure. We don’t say a thing. Everyone around this table has realized it's our job to tell the story and bring the community in, and I think Buddy has led the effort in that and the rest of us have followed along.”

Industry leaders said they are looking to hire hundreds of contractors to construct and service the centers. They are looking at standards to handle various security requirements with military agencies, applications and streaming platforms.

A recent study from the Department of Energy determined there is “modest growth” in data center energy, something that pushed back against analyses stating that energy has doubled in the past decade.

The study found that while data centers computing output jumped sixfold from 2010 to 2018, their energy consumption rose only 6 percent.

As for attracting data centers, power capacity, connectivity and local workforce are the main drivers.

"I think with the alignment with the ingredients of power, connectivity, workforce … have really made a difference in northern Virginia," Stephenson said. “On the workforce component, that is big. That is why Amazon's been long investing in Virginia. That's why we brought HQ2 here to tap into the talent and the potential talent that we know is out there.”

“Direct access to fiber is so critical for what we're trying to do and for what our customers are trying to do,” Lin said. “It's that being on those long-haul routes, being adjacent to the bulk of the internet that's going to be flowing through those areas, and that's what we've been able to build here in Ashburn.”

Warner looks confused....time for him to be retired....

This is why Sanders won't win in Virginia.

Capitalism lifts many boats, whereas Socialism destroys the entire economy.

Same thing with Biden. If democrats were honest with themselves Biden wouldnt win Virginia either. He is a Socialist light who believes in open borders, healthcare for illegals and many other far left ideas.

"According to recent estimates, more than 70% of the world’s internet traffic passes through Loudoun’s digital infrastructure"

LTM, this "recent" estimate is outdated at best (by well over a decade), or was never true to begin with.

The way data is distributed nowadays, there is no single exchange point that sees significantly more traffic than all others.

Senator Mark "on the take" Warner? Of course he would "move heaven" to get it done so that he can line his pockets. Why doesn't he give the credit to Trump for the growth in the economy that requires data centers. Oh my he would never do that, as he is the party of the Socialist Communist Democratic Party which is gather unto me what is mine. Of course everything is theirs. Remember this is not to benefit anyone but politicians. Here is the cold hard truth. If someone is a life long politician then they are backstabbing corrupt people who want to steal your money and make you think they give a damn about you. Good news is that Warner is up for re-election in 2020, also remember he supported Hillary corrupt Clinton, also remember he was a huge leader in the fake impeachment that was based on lies to the FISA courts which are now under investigation. Let's not forget that he is part of the SCD that want to take all of your rights away and partition what they think you should be allowed to have and do, concerning your rights as a citizen. Mark Warner is now exposed as the corrupt liar that he is. Turn VA RED (Remove Every Democrat) in 2020. Keep the amazing growth going for the middle class and all minority classes as Donald J Trump has done in 3 years what corrupt Democrats, who represent slavery have promised for over 50 years. Quit using citizens as a talking point and show results like Trump has done, especially with unemployment and criminal reform which SCD said they would do but never did. Go Trump 2020 and keep America Growing and Great. Defeat the likes of Warner, Kaine and Wexton who all are owned by Bloomberg who wants to throw you up against a wall, says "get rid of it" to a pregnant woman and who believes the only person that should be able to protect himself is him, as stated in his Manassas town Hall just last night. What a communist jerk. Turn VA RED, Go Trump!

You do know that Red is the color of the Communist Party don't you...

It's amazing how this article doesnt even mention Trump. He is the reason why this industry and every industry is booming

No thanks to Mark Warner who has obstructed every inch of the way.

you should pick one of your accounts and just go with it for comments.

I hope my sarcasm meter is not functional today. Otherwise this is one of the most ridiculous comments (a really high bar) i've seen in this newspaper. Its debatable how much economic growth should be attributed to the tax incentives, but the datacenter growth has been booming for 20 years. This is despite the President's continuous rhetoric against Amazon - the biggest consumer of capacity in this county.

The president rhetoric about Amazon is much deserved. Have you seen Dulles Town Center lately? Niemann Marcus and Lord and Taylor are empty. The other three anchors, JC Penny, Sears and Macy's are holding on by a thread. Thanks to Amazon.

Mark Warner trying to steal our property tax base... where is Tim Kane to shut him down? Does northern va contribute to the subsides Warner is offering to move business from Loudoun county to southern va?