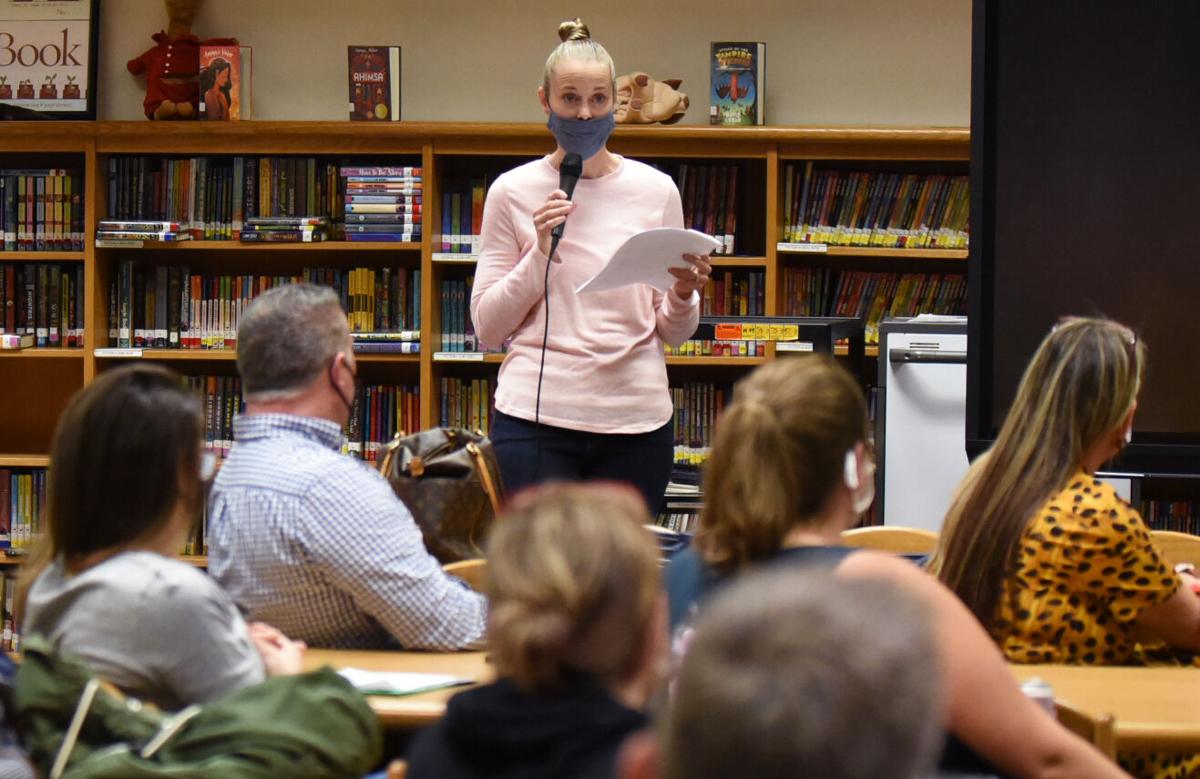 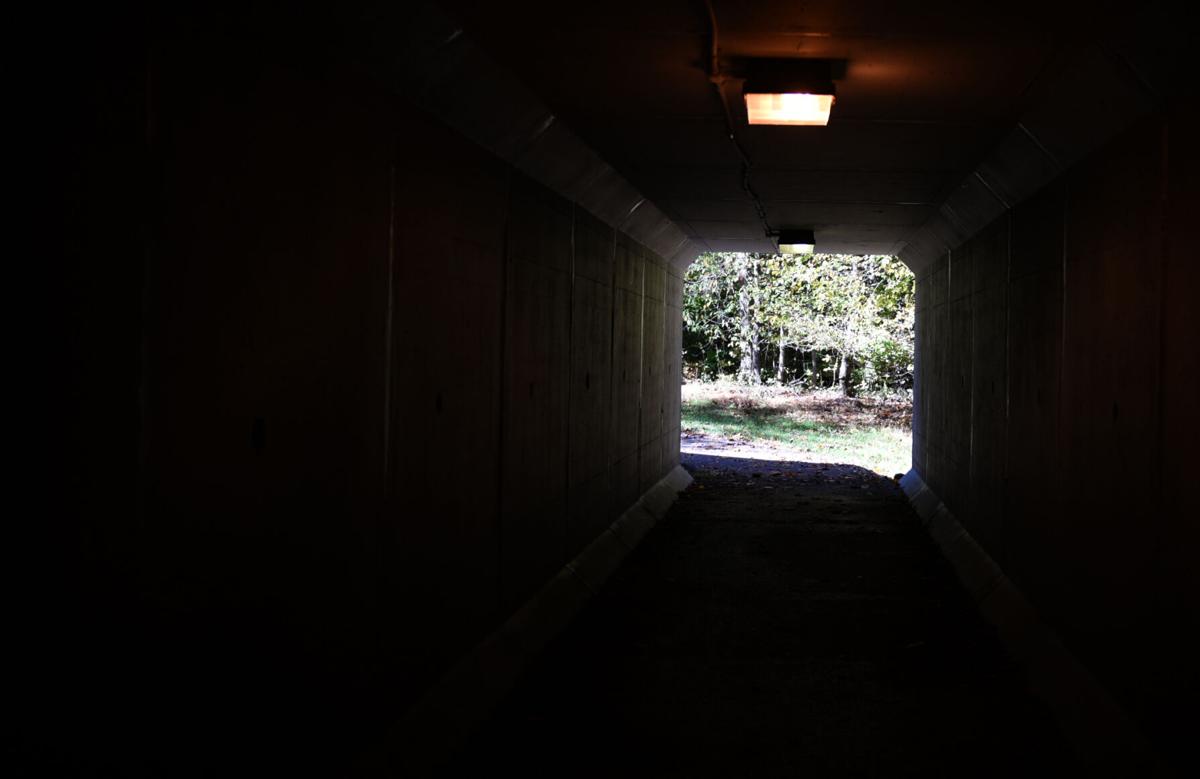 A view from inside the pedestrian tunnel that runs beneath Lowes Island Boulevard. School officials have suggested parents instruct their children to use the tunnel for safe transit to Lowes Island Elementary School. 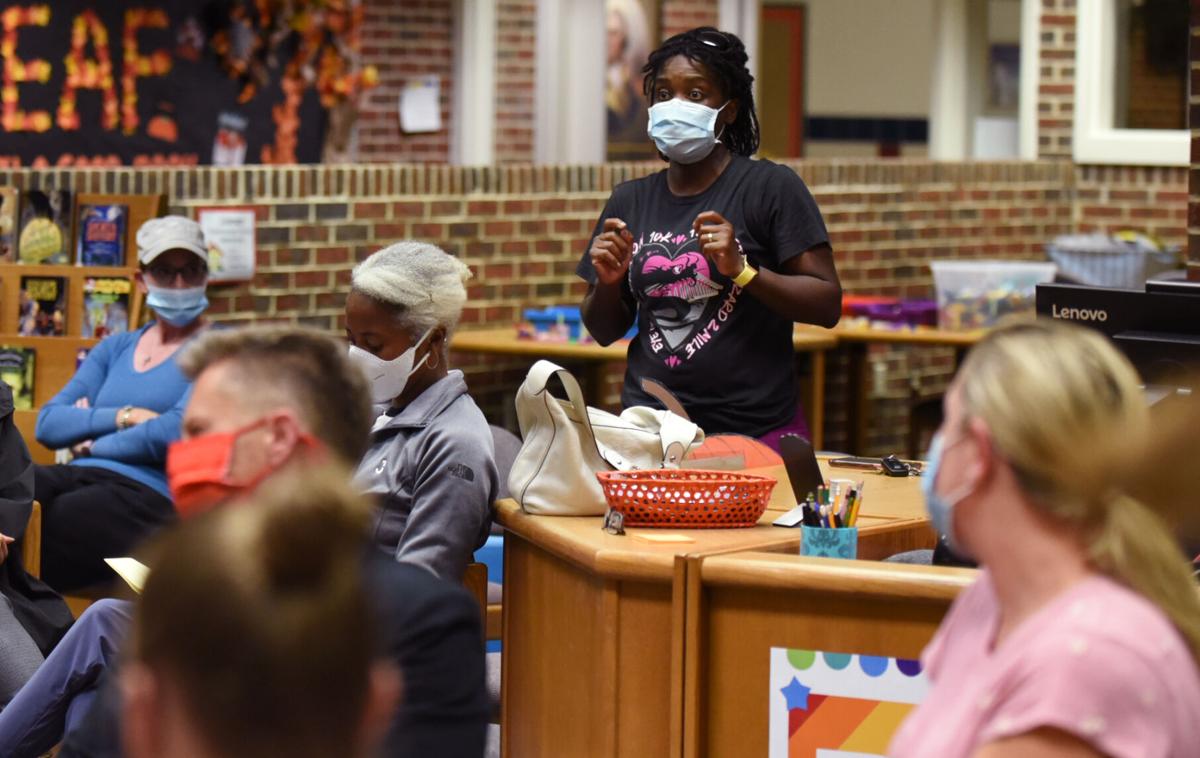 A resident of the neighborhood surrounding Lowes Island Elementary School speaks at a meeting in the school’s library organized by parents calling for greater pedestrian safety measures at a crosswalk near the school on Monday, Oct. 25. 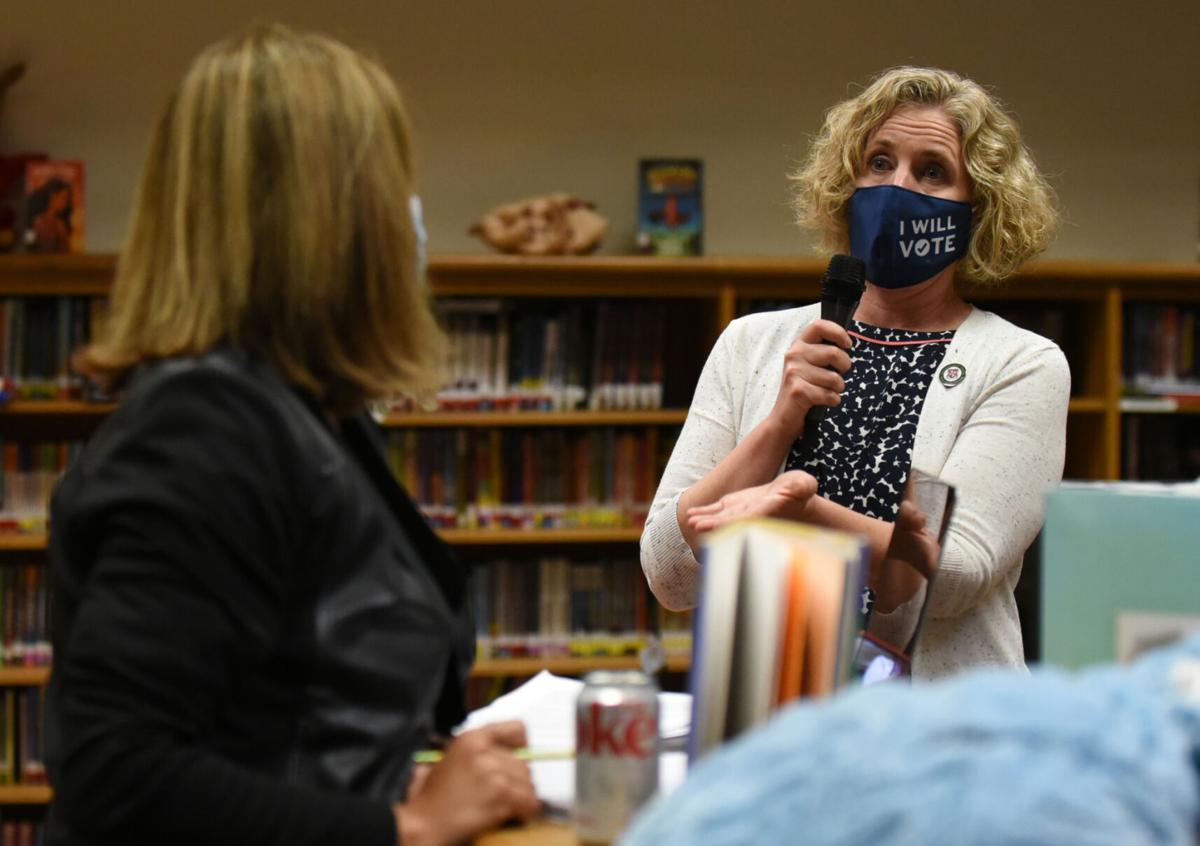 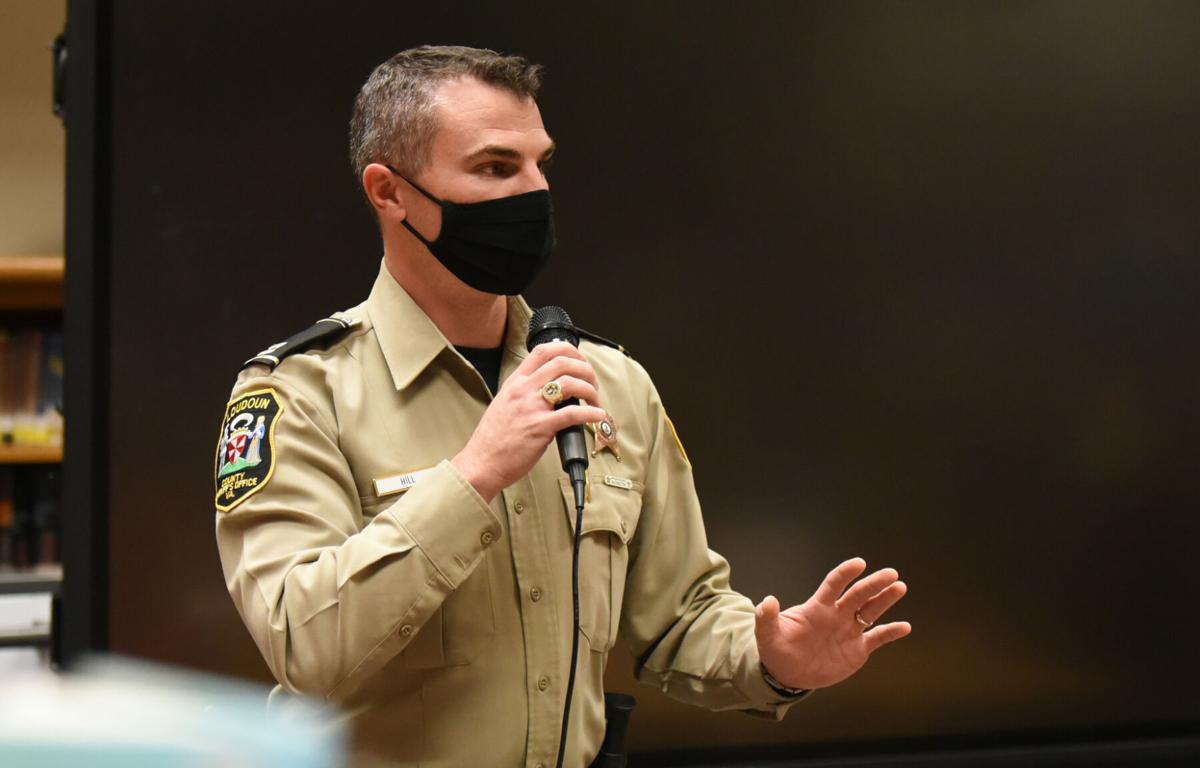 A view from inside the pedestrian tunnel that runs beneath Lowes Island Boulevard. School officials have suggested parents instruct their children to use the tunnel for safe transit to Lowes Island Elementary School.

A resident of the neighborhood surrounding Lowes Island Elementary School speaks at a meeting in the school’s library organized by parents calling for greater pedestrian safety measures at a crosswalk near the school on Monday, Oct. 25.

Residents of the community surrounding Lowes Island Elementary School in Sterling urged public officials from the Board of Supervisors and Loudoun County Sheriff’s Office last week to enact stronger measures to protect pedestrians using a four-lane crosswalk at nearby Saulty Drive and Lowes Island Boulevard.

Sally Freeland, who said she moved to the neighborhood with her husband and three daughters in June, described many drivers’ attitudes in the area as one where vehicles using the roadway take precedence over pedestrians — even those using the crosswalk.

“I told my husband, ‘It will be better when school starts, because there will be a crossing guard,’” Freeland said. But she said once school started and she had to take her children to school during morning rush hour, the safety hazards intensified.

The crosswalk traverses Lowes Island Avenue at an area where residents said the speed limit is 35 miles per hour, but drivers adopt a “cars first” attitude and often fail to stop for pedestrians, according to Lowes Island parent and neighborhood resident Kiren Day.

Algonkian District Supervisor Juli Briskman, who attended the meeting, said she had tried to cross the intersection days earlier with a small child, and had to yell at a driver to avoid hitting them.

Briskman recalled that she was preparing to cross Lowes Island Boulevard from the east side of the roadway when a young boy came running up the sidewalk toward her. She said she asked the child, “‘Are you running because I’m about to cross the street, and these cars have stopped?’” The boy exclaimed, “Yes!” according to Briskman.

She then said once they got to a median in the middle of the intersection, “a person was turning left from Saulty, and she wasn’t stopping.” Briskman recalled grabbing the boy’s arm and yelling at the driver to stop. “The child was obviously nervous about crossing in the crosswalk. Otherwise, he wouldn’t have been running up to me,” she said.

Day called for the Board of Supervisors, LCSO and Loudoun County School Board to set aside their political priorities and come together to keep the community’s children safe.

She said she needed her local branches of government — the sheriff’s office, Board of Supervisors and school board — to “do your job. I need you to take our tax dollars, work together collaboratively, stop passing the buck ... Stop pointing the finger, and find a solution.”

Officials from LCPS and the sheriff’s office had recommended that residents concerned about using the Lowes Island crosswalk as pedestrians instead use a tunnel that runs underneath the busy intersection.

But several residents countered that the tunnel was unsafe, with numerous women saying they would not feel comfortable telling their young daughters to travel through a dark, secluded area for safety concerns.

Freeland said that with tunnels usually located in secluded areas not visible from the main roadway, they were an absolutely unsuitable option for transporting her daughters to school. They “lay a fabulous groundwork for potential assault,” she added. “You don’t teach your daughters to go into circumstances like that.”

Other parents recalled seeing used condoms, needles and drug paraphernalia in the tunnel.

Day emphasized that she would like to see either a crossing guard stationed regularly at the intersection during school drop off and dismissal hours, or for a bus stop to be provided to neighborhood residents.

Prior to the meeting, spokespersons for both the sheriff’s office and LCPS confirmed that crossing guards were staffed under the purview of the LCSO. Bus stop locations are set by the school board.

Capt. David Hill — LCSO station commander for the Eastern Loudoun Station — told participants toward the end of the meeting that with so many crosswalks in the county to try to provide traffic enforcement for, “I cannot put an officer out here every single day.”

Despite his comment about not being able to have deputies at the Lowes Island crosswalk every day, Hill said he would “have deputies out here and try to do additional enforcement. ... We’ll have a commitment from the sheriff’s office to have somebody out there in the morning.”

A spokesperson for the sheriff’s office later said that while crossing guards are staffed by the LCSO, designated crossing guard locations are set by LCPS.

“This area was not designated as a crossing location by LCPS. That’s ultimately a decision that they would make,” according to Kraig Troxell, director of media relations and communications for the LCSO. “I know this has been brought to their attention, at this location,” he added.

Troxell said the sheriff’s office has crossing guards stationed at all designated crossing locations. “We’ve been ... monitoring speed around this crosswalk; to include enforcement — and that enforcement has been carried out after” last week’s meeting at Lowes Island Elementary, he said.

A spokesperson for LCPS told the Times-Mirror via email on Wednesday afternoon that “Loudoun County Public Schools is collecting information on this matter and expects to have a comprehensive response by the end of the week.”

Day expressed outrage that the sheriff’s office, school board and Board of Supervisors could not come to a definitive solution. “We don’t allow bus drivers to sometimes drive children to school, and to sometimes let kids drive themselves to school,” she said. “So why is it that we get a sometimes solution when other children get an everyday solution?”