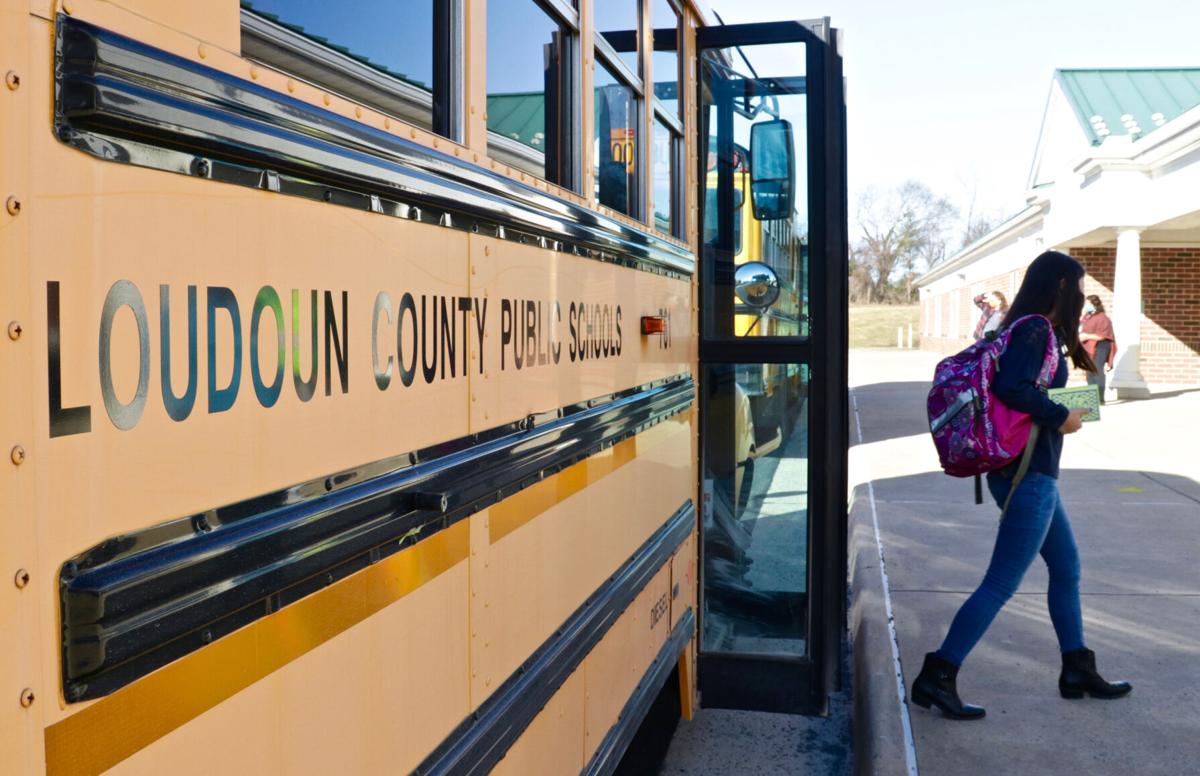 A student steps from the bus to enter Harmony Middle School in Hamilton on Wednesday, the first day high school and middle school students returned to classes in Loudoun. 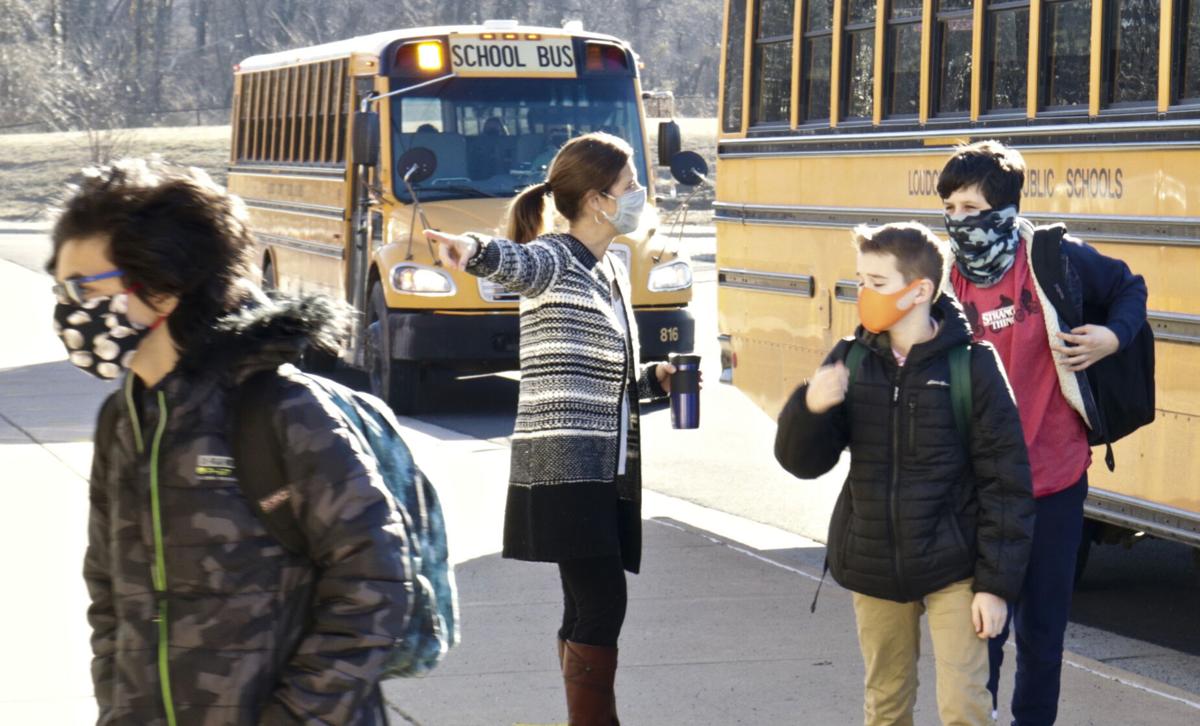 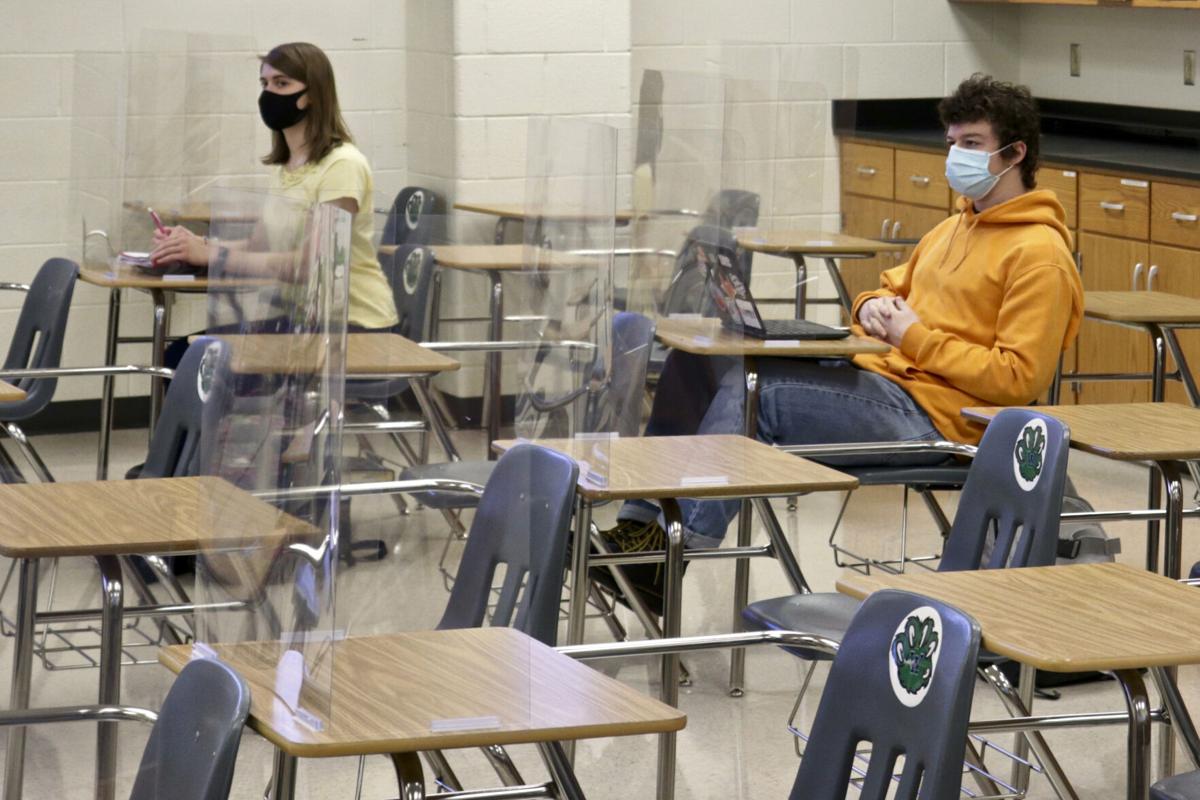 Students sit spaced out and behind plastic shields in a hybrid learning at Woodgrove High School in Purcellville. 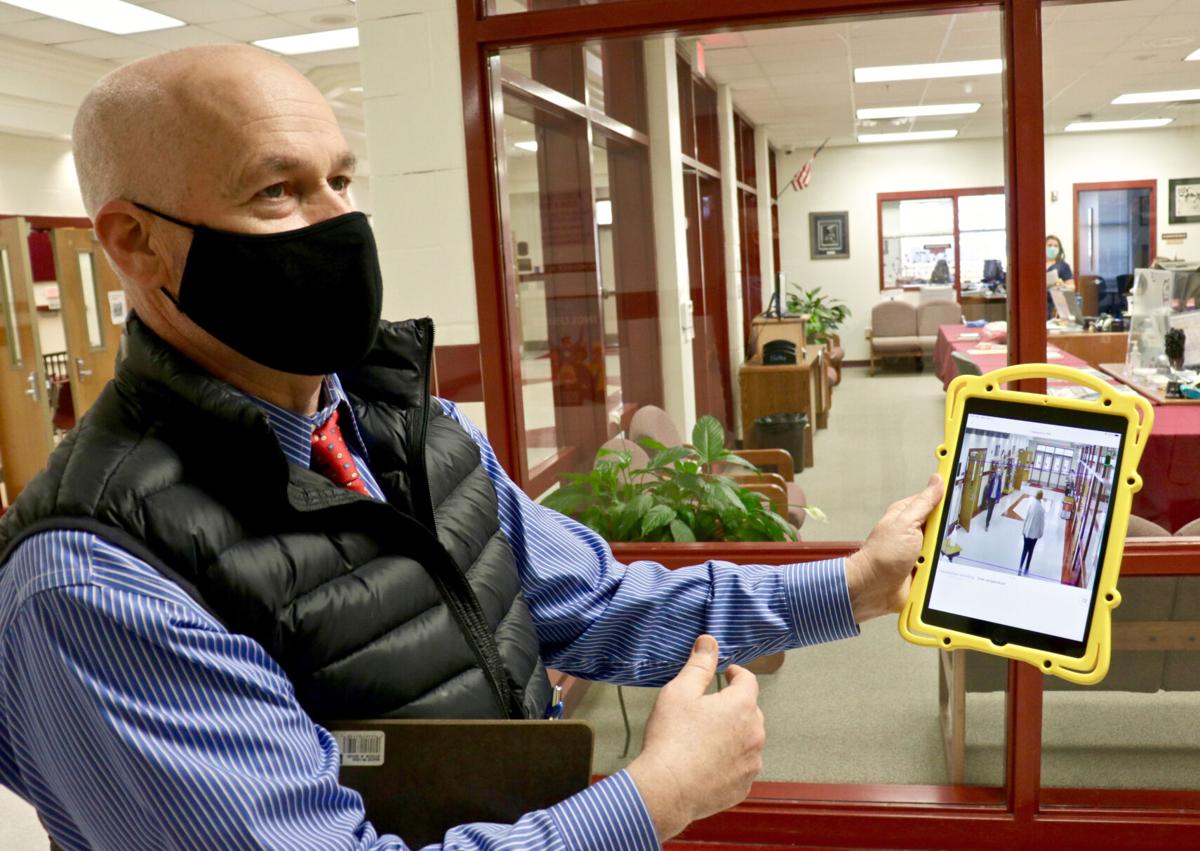 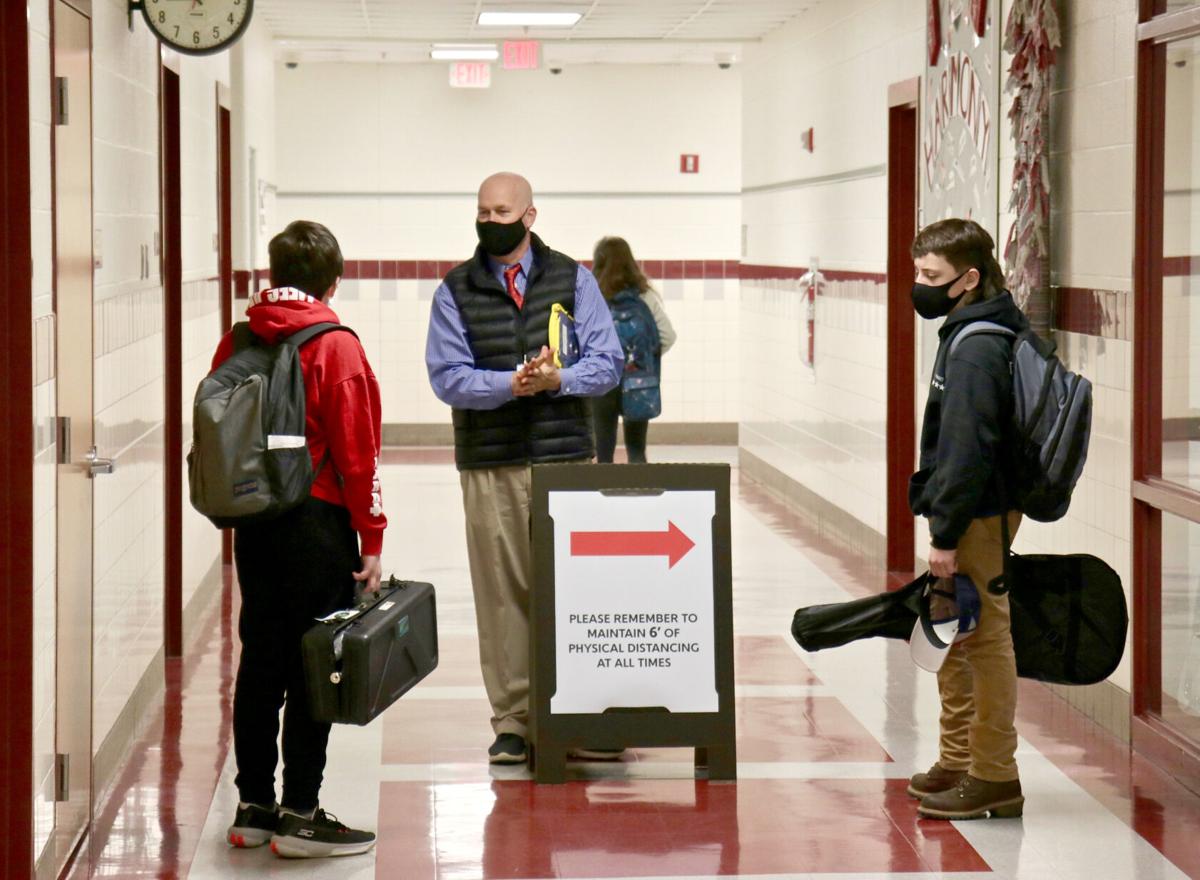 A student steps from the bus to enter Harmony Middle School in Hamilton on Wednesday, the first day high school and middle school students returned to classes in Loudoun.

Students sit spaced out and behind plastic shields in a hybrid learning at Woodgrove High School in Purcellville.

Next week will mark one year since Loudoun County Public Schools ceased full in-person learning in response to the then-nascent COVID-19 health crisis. But on Wednesday, five days per week of virtual learning became a thing of the past for nearly 15,000 secondary school students in the county.

LCPS has implemented its fourth and final stage of hybrid in-person learning, meaning 6,784 middle-schoolers and 8,092 high-schoolers will now visit their school buildings two days a week. For many of the school system’s 3,653 teachers who reported for duty Wednesday, it was their first time seeing their students in person rather than via webcam.

“Having seen them on-screen the whole year so far, as they walked into my room I felt like I was almost seeing celebrities,” Eddy Stetz, a sixth-grade math teacher at Hamilton’s Harmony Middle School, told the Times-Mirror.

“They breathed life back into this place,” added Sam Shipp, principal of Woodgrove High School in Purcellville.

The return to the brick-and-mortar classroom has been a waiting game for children whose families opted to enroll them in hybrid learning. By December 2020, the first three stages of LCPS’s hybrid implementation plan had been carried out, and Stage Four was scheduled to begin Jan. 21, meaning LCPS students of all ages would have the opportunity to interact with classmates and teachers face-to-face once again.

However, an uptick in core indicators of local coronavirus spread led then-LCPS Superintendent Eric Williams to announce the school system’s indefinite return to full distance learning in mid-December. Students in the first three stages — all elementary students and select others — eventually returned to hybrid Feb. 16 after two months of closure.

While the postponement was disappointing for secondary-level educators, it did provide extra time for staff to make sure school buildings were safe and prepared to accommodate students with health mitigation strategies in place.

“We were able to double-check all our safety procedures,” HMS Principal Eric Stewart said. “We teamed up and walked around the building together to make sure that, when the kids came back, things were going to be in order.”

Thanks to numerous technological assets, schools are able to conduct thorough checks of each student for COVID-19 symptoms. Before arriving on site, children are required to fill out an online form confirming they have not experienced any symptoms; for those who have not filled it out before the morning bell, staff have hung printouts of a QR code around schools, which students can simply scan with their smartphones to bring up the form online.

Most impressive among the various symptom-check methods, however, were the newly-installed thermal cameras mounted above designated entrances to each Loudoun school. Funded through the Coronavirus Aid, Relief, and Economic Security (CARES) Act, these cameras are able to conduct temperature checks on 45 people every second, indicating in red anyone running a fever of 100.4 degrees or greater.

More basic health mitigation measures included mask-wearing mandates and placing signage to maintain 6 feet of distance between students in classrooms and hallways, 8 feet in cafeterias and 10 feet during exertive activities such as gym class, music class or marching band practice. Plastic screens have also been placed on desks to further prevent potentially virus-carrying air particles from student to student.

Staff found ways to creatively communicate the physical distancing mandates in particular: The halls of Woodgrove High School were dotted every 6 feet with stickers bearing the school’s athletic logo, while world history teacher Doug Dillon dressed mock skeletons in period outfits and sat them at several desks throughout the classroom, denoting which seats students had to avoid to maintain safe proximity.

The return to hybrid also meant middle- and high-school teachers had to get used to concurrent teaching, in which they simultaneously instructed students in the classroom and at home. Per Woodgrove Principal Sam Shipp, the LCPS Department of Digital Innovation has implemented a two-camera system through which students learning virtually can both see students attending in person and the day’s lecture.

“We’re really trying to mix the two as best as we possibly could, almost like a synthesizing of the two environments,” he said.

“Today in my classroom, I’m able to demonstrate to them, and they can see firsthand … exactly what’s going on and kind of up-close, which I think is a wonderful teaching tool,” she said.

Even with the student safety and effective instruction as top priorities, staff went the extra mile to make students’ first day back in the classroom a little brighter. Doors lining the halls of Harmony bore fresh paintings of the school’s Hornet mascot, while Woodgrove students walked between class periods with upbeat tunes — such as American Authors’ “Best Day Of My Life” or the theme song from “Welcome Back, Kotter” — playing over the intercom.

But more than new gadgets, catchy songs or skeletons in historical accoutrements, Loudoun educators uniformly said their greatest joy in finally starting hybrid learning was having a face-to-face connection with their students for the first time in a year.

“You could feel their excitement,” Stewart said. “Of course, you couldn’t see their whole faces, but you could just tell from their body language and their eyes they were glad to be back. They were glad to see each other and to be back in our routine.”

“They breathed life back into this place,” Shipp added.