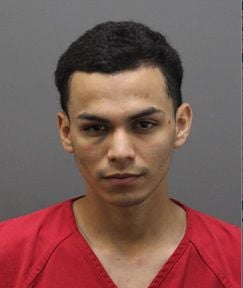 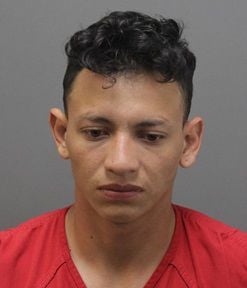 Three Leesburg residents have been arrested and charged following incidents connected to the MS-13 gang, according to the Leesburg Police Department.

On June 12, a man reported that he was the victim of a robbery by known suspects in the 800 block of Edwards Ferry Road NE. The suspects assaulted the victim and stole personal property, according to the LPD.

The next day, a second man reported that he was stabbed in the leg by known suspects in the 800 block of Edwards Ferry Road NE following an argument. The victim was transported to a local hospital with what was determined to be non-life threatening injuries.

The day after that, a third man reported that known suspects brandished a machete at him while walking on the W&OD Trail in the area of Prosperity Avenue SE. The victim fled the area uninjured.

After an investigation by the Leesburg Police Department’s Special Investigations Unit (SIU), with assistance from the Loudoun County Sheriff’s Office, two men and a juvenile male were charged for the incidents. All suspects in this investigation have been arrested and charged. Authorities say no additional arrests are anticipated.

The following were charged:

• Mauricio Lopez-Alvarado, 24, of Leesburg, was arrested and charged with two counts of gang participation, one count of robbery and one count of malicious wounding by mob.

• Guillermo Amaya-Serrano, 21, of Leesburg, was arrested and charged with three counts of gang participation, one count of robbery, one count of malicious wounding by mob and one count of brandishing.

• A 16-year-old male Leesburg resident, whose name is not being released because he is a juvenile, was arrested and charged with one count of robbery and one count of malicious wounding.

“The Leesburg Police Department has a zero tolerance for gangs in our town,” Leesburg Chief of Police Gregory Brown said in a prepared statement. “Our Special Investigations Unit is committed to identifying and reducing crime through community policing, crime analysis and the utilization of both traditional and non-traditional enforcement techniques to enhance the quality of life [of town residents].”

These fine young gentlemen should be released at once! jose flores too! Democrats need their votes.

Thebroof--give me a break. The judicial system doesn't give a flying toss about political orientation of these offenders. They will be handled in accordance with (IAW) the Criminal Code of Virginia and processed accordingly.

Just glad to know that the Loudoun Soros-Installed DA will protect these poor misguided fellows. They'll be back on the street and stronger than ever, and the rest of the gang will realize it's an easy place to live and to commit crimes. Welcome to Loudoun, MS-13

Flabio--OK, George Soros, as a private citizen, cannot install an elected official. How do you know that George Soros is even involved in Loudoun politics? The answer is that you don't and am making an unsubstantiated blanket statement that is not supported by any facts. Also, your premise about the organization of MS-13 (they will be stronger than ever) is a conditional premise that is not supportable as you do not what external variables may impact it.

Such a pity that none of the victims were armed. Now we’ve gotta pay to feed these animals.

Count Quackula--your premise is flawed. How can you say that the gang would be terminated by a victim with a weapon? How can you not say the opposite could occur where the offenders terminate the victim? The answer is that you can't so the use of a blanket statement with no support is deployed. BTW, as part of the County Sheriff's budget is a portion for costs associated with correctional facilities so you would have had to pay for the costs anyways since these offenders are "guests of the Commonwealth."

Starting with an extra scoop of hate with your coffee this morning? Maybe it's time to take a walk and get outside away from the TV and CPU for awhile. I can't imagine the stress that your bodies are constantly under consuming all of this outrage.

Good work police! Very grateful you are out there protecting and serving....

You can fly again amerigirl. Take a trip

Oh my GOD. Another hypocrite laden ed bunch of posts. Labeling poor MS-13 as white, or Hispanic or whatever. The horrific posts on "oh so 99% are bad because of a few ones? WAKE UP YOU IDIOTS!! Have you seen what is going on? No because you live in your "privileged" little bubble. Sitting sipping your latte. WAKE UP YOU IDIOTS!! Where have you been? All police are bad. All police are racists. All police must be "fry them up like bacon". Only BLM unless they are in the womb and then they can be killed by the millions. WHAT IS WRONG WITH YOU PEOPLE. These "poor white boys" will be let out to do the same thing again. I hope the police made sure when they arrested them that they let them punch them in the face and steal their weapons. That is the norm now. Liberalism is pure evil and must be eradicated at the voting booth, otherwise we will have an MS-13 occupied block and of course a "summer of love". PATHETIC!!

HWA--as someone whose family is IN law enforcement, I know very well what is going on every day, thanks. You are very wrong on multiple fronts. First, you make a blanket characterization that "all police are bad...all police are racists." Both of those premises are totally wrong. Sure, like other professions, there are a few rogue officers but the MAJORITY of the law enforcement officers are professional/competent and care about their communities that they serve. As to the concern about the suspects "...punch them in the face and steal the weapons." It is obvious that you do not understand police procedures for booking a suspect. Police are allowed to use sufficient force to subdue a suspect so there wouldn't be any punching or stealing weapons. Punching an officer isn't the norm. The election of a political party, be it Democrat or Republican, will not impact how gangs organize within a community. That is simply wrong.

I know it can be hard to decipher Voltaire but I think HWS was being sarcastic when describing the police.

Mauricio Lopez-Alvarado has no fixed address and under “race” is listed as white. At least 10 years ago he would be labeled under race Hispanic. This is just another example of the politically correct access to the court system in changing this designation. In the annual crime report of Va, Mr Lopez-Alvarado crime spree will be listed under”white” male. His crimes will go underreported and won’t give the average person any clue into their activity. There will be no report of his involvement in gang related activity.

All part of the anti-white agenda.

More proof that "white supremacists" have infiltrated MS-13 and are responsible for all this violence. LOL.

His race is white. His ethnicity is Hispanic. Understand the difference.

"Times-Mirror Staff Report" sounds like a euphemism for "news taken entirely from police press release with little, if any, original reporting." I don't necessarily have a problem with this, as I'd rather have the news release rehash than nothing. But these "rip and write" pieces should be identified as such.

I hope that in time, LTM reporters will gather more info such as any prior offenses these guys have racked up, including immigration issues, as they reflect on the character of the accused. (And to the usual suspects on comments page, yes, a suspect's immigration status is indeed relevant because it sheds light on one's ability and inclination to play by the rules.)

It probably is for police reports there is no reporters names at the bottom of the article. Maybe they don't have a reporter that covers it.

Not all Hispanics are immigrants.

What about their parents?

What about your parents? Their parents, etc.?

LP--the premise made by GenevieveB20 also would apply to "their parents".

True, that is a valid premise.

Glad to see our right wing reactionaries able to pivot quickly back to what makes them so happy, bashing all immigrants because of a "few bad apples."

What makes you think these are immigrants, BLT? The article doesn't say that.

Funny, that's what that Black community does to Cops. But you see 99% percent of immigrants arent good while 99.5 percent of cops are.

You live in an irony-free zone...

You think that 99% of immigrants aren't good? Are you American Indian?

You're not allowed to point out their hypocrisy. They'll burn down a Wendy's or something if you're not careful.

MarcStinebaugh--your premise is severely flawed. Can you prove that every time you disagree with the Black Community that it will automatically lead to arson of an establishment? No, that is a blanket characterization and inaccurate.

Remember that LCPS both (1) spends more $$$ on the 16-yr-old than they do on disadvantaged kids whose families have been here in the US for generations and (2) plans to allow such 16-yr-olds to spend MORE time physcially at schools than the rest of Loudoun students.

How insane can our our political leaders get?

And you know they are dreamers how? Also where did you get your data for students?

eyes , ears, age of these criminal dreamers. pretty easy if you are paying attention.

RHG--really? Are we doing some racial profiling? Appears so. That is discriminatory.

I recall a young girl who was raped and murdered a couple of years ago in Sterling, by an illegal immigrant MS-13 gang member. But the media conveniently ignored those details whenever possible. All that was important was that she was Muslim. Her attacker was a protected class of individual, as well, so it wasn't politically expedient to talk about that part.

LP--the answer to your question depends on two items (1) the law enforcement agency's internal operating procedures and (2) whether the location of the booking/custody facility, presumably Leesburg, is classified as a sanctuary city/town or not. I would suspect that they did in order to see if Immigration and Customs Enforcement (ICE) has any outstanding detention retainers on these individuals.

Don’t worry people...the liberal judges and leaders will praise them as really good kids and blame Trump for their mistakes because orange man bad.

Biden will grant them citizenship, pardon them and let them vote in the 2021 election. Future democrat voters!!!

yu have some wierd conspiracy theories, why would anyone ever believe anything you say?

Workhardgetahead--I understand what sarcasm is. However, your premise(s), sarcastic or not, are still unsubstantiated.

It's this new thing, it's called sarcasm