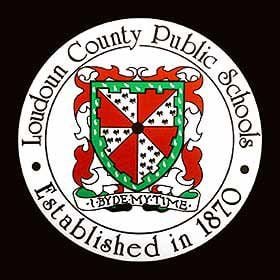 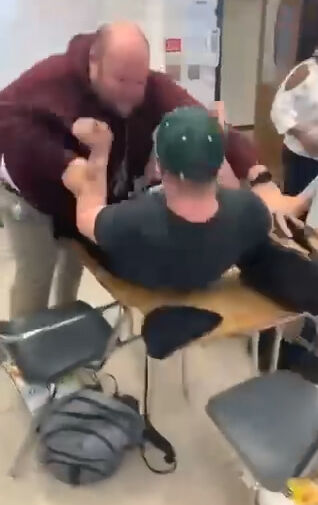 A frame grab from a video showing a physical altercation between a Woodgrove High School staff member and a student circulated on social media following the altercation.

A Woodgrove High School teacher who engaged in a physical altercation with a student during class Monday — which was captured on video — has been placed on administrative leave, pending an investigation, according to Sam Shipp, the school’s principal.

A spokesperson for the Loudoun County Sheriff’s Office said via email Tuesday afternoon that the altercation, which took place at about 2:40 p.m. on Monday, is under investigation by the sheriff’s office. In a follow-up email on Wednesday, a spokesperson said that neither the teacher nor the student’s family have sought charges in the matter.

A one-minute video of the incident, which was apparently recorded by a fellow student in the classroom, begins with two male voices yelling back and forth out of view of the camera. It’s not immediately clear what precipitated the argument.

About 20 seconds into the video, a student enters the frame and walks up to the teacher who is seated at a small desk.

As the teacher pulls the laptop away from the student he moves forward, shoving the student backward onto a cluster of desks, at which at least two other students are seated.

While the two struggle for control, the camera’s view changes for several seconds as the person filming moves away from the fracas.

When the camera is turned back toward the altercation, the teacher can be seen attempting to grasp the student’s arms and push him down onto the desk. The student then begins to stand up before being shoved backward to the ground, apparently hitting the back of his head on the edge of the desk.

The angle of the camera changes briefly again, but when it returns to the two, both are on the ground — the student on his back, and the teacher face down on an overturned seat and desk.

The student then appears to put an arm around the teacher’s neck before releasing him and striking the teacher in the back of the head with two forceful blows as fellow students implore him to stop.

The teacher then wraps an arm around the student and drags him over an overturned desk, before pinning him to the ground.

The pair struggle for another moment before both — partially obscured behind several bystanders — become still and the video ends.

Shortly before 6 p.m. Monday, Shipp sent an email addressed to the Woodgrove High School community acknowledging that an altercation took place during the eighth block between a student and staff member.

“School administration is aware of this situation and is taking appropriate action,” Shipp wrote. “Because this may involve student discipline and personnel actions I cannot give you further details. I can tell you that the other students in the classroom at the time of the incident were not injured.”

He added that Woodgrove’s Unified Mental Health Team, which includes counselors, school psychologists and social workers, would be available to speak with students if desired.

“Please contact the school with any questions or if your child needs additional support,” Shipp said in the Monday letter. “The safety of students and staff is the top priority of Loudoun County Public Schools.”

That punk should at a minimum be expelled from LCPS. And the teacher would have been totally within his rights to beat that punk senseless.

Try the kid as an adult!