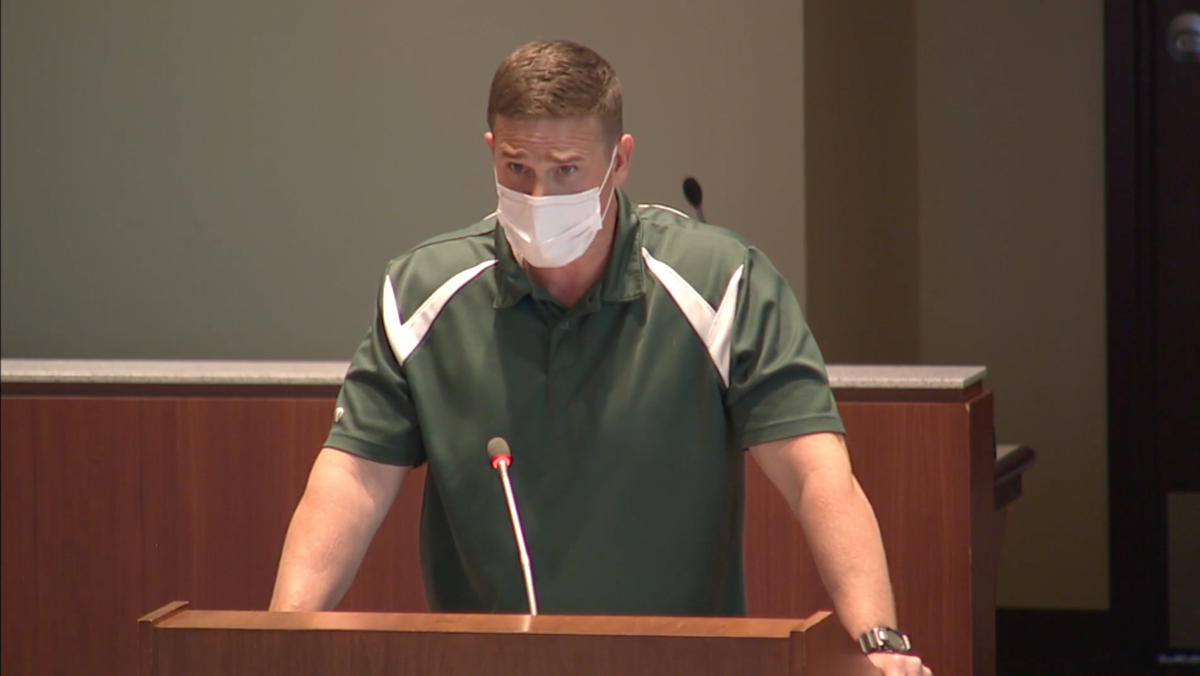 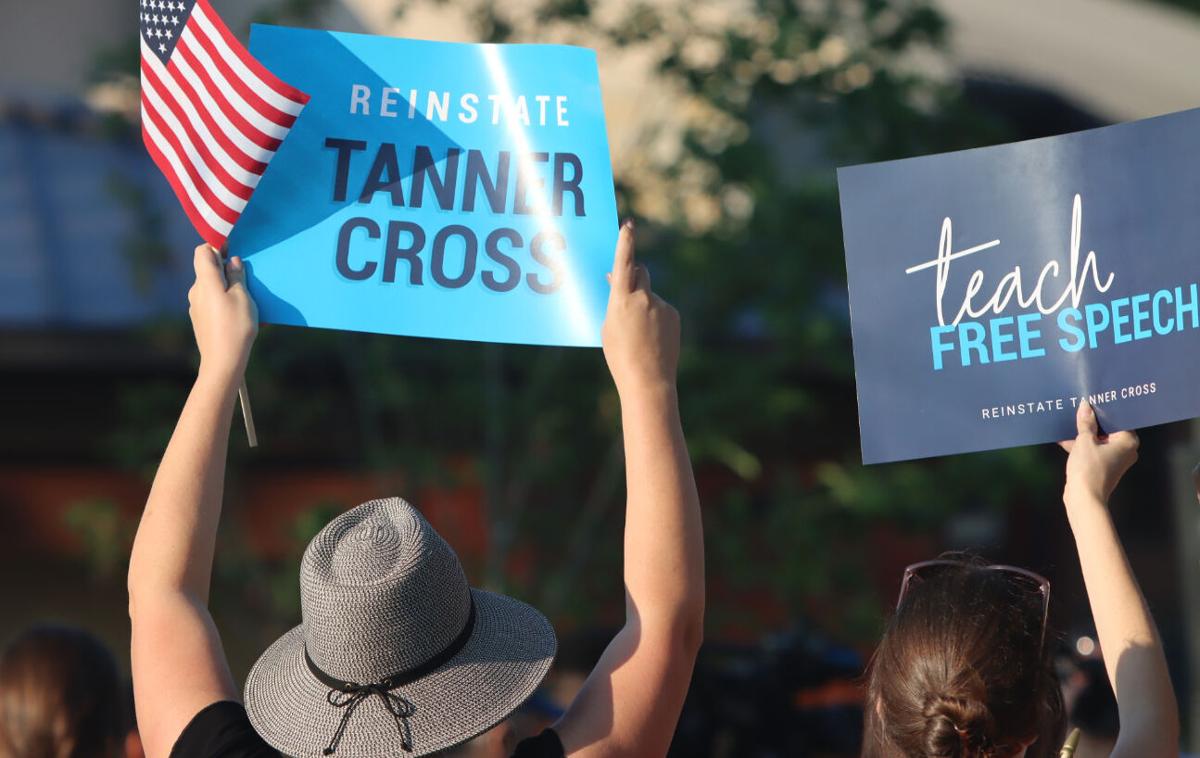 Supporters gathered Friday, June 4, to show support for Leesburg Elementary School teacher Byron “Tanner” Cross, who was placed on paid administrative leave following controversial comments he made to the Loudoun County School Board.

Supporters gathered Friday, June 4, to show support for Leesburg Elementary School teacher Byron “Tanner” Cross, who was placed on paid administrative leave following controversial comments he made to the Loudoun County School Board.

The Supreme Court of Virginia on Monday rejected a Loudoun County Public Schools appeal challenging a circuit court judge’s decision to reinstate a teacher who was suspended after remarks made during a May school board meeting, according to court records.

Byron “Tanner” Cross, a Leesburg Elementary School physical education teacher, was suspended after stating during a May 25 public comment portion of a School Board meeting that he would not refer to transgender students by their chosen names or pronouns, challenging the school system’s draft Policy 8040, “Rights of Transgender and Gender-Expansive Students.”

Cross said he would “not affirm that a biological boy can be a girl, and vice versa,” citing his Christian faith as his reasoning. 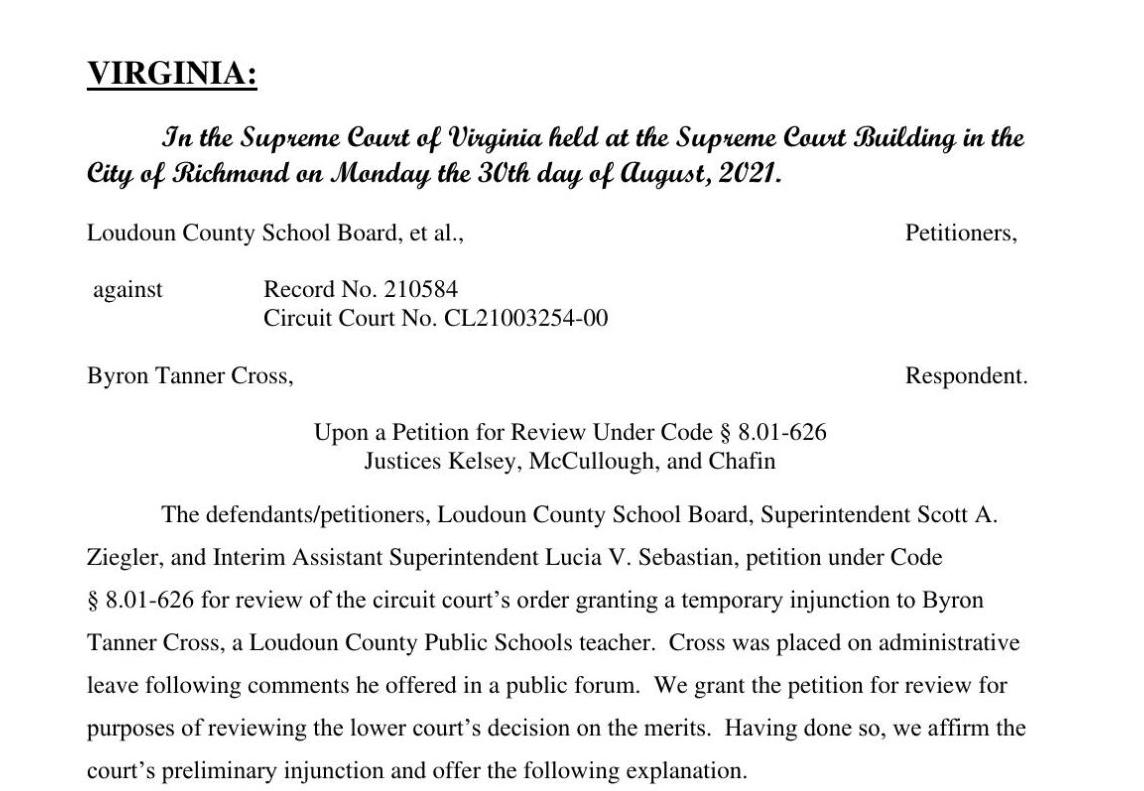 Following his remarks to the School Board on May 25, Cross said on Fox News that he would refer to a child by their desired name, but reiterated that he would not use a student’s desired pronouns, saying “I just can’t say things that are untrue.”

“Teachers shouldn’t be forced to promote ideologies that are harmful to their students and that they believe are false, nor should they be silenced for commenting at a public meeting,” said Tyson Langhofer, senior counsel and director of the Center for Academic Freedom with Alliance Defending Freedom (ADF) in a prepared statement.

“The lower court’s decision was a well-reasoned application of the facts to clearly established law, as the Virginia Supreme Court found,” he said. “But because Loudoun County Public Schools is now requiring all teachers and students to deny truths about what it means to be male and female and compelling them to call students by their chosen pronouns or face punishment, we have moved to amend our lawsuit to challenge that policy on behalf of multiple faculty members. Public employees cannot be forced to contradict their core beliefs just to keep a job.”

D.C. attorney J. Caleb Dalton and Langhofer, based in Ashburn, filed the lawsuit against LCPS on behalf of Cross. The suit claimed that that the school violated Tanner’s constitutional rights by suspending him.

The defendants said the circuit court erred in failing to consider the totality of the circumstances and placing undue emphasis on the single factor of likelihood of success on the merits.

Additionally, the defendants said the court erred in finding that Cross is likely to succeed on the merits of his claims and was likely to suffer irreparable harm in the absence of temporary injunctive relief.

To support the opinion, the Supreme Court of Virginia referred to ADF’s Meriwether v. Hartop case, in which “the Sixth Circuit emphatically held that a university professor stated viable free speech and free exercise claims based on his university’s disciplining him for refusing, based on his Christian faith, to use a student’s preferred pronouns.”

Cross is scheduled to be heard on the suit in the Loudoun County Circuit Court on Sept. 7-8.

The hearing date is subject to change due to the plaintiff filing an amended complaint since the School Board adopted Policy 8040 on Aug. 11.

ADF are seeking to amend the lawsuit against LCPS asking the court to immediately suspend the adopted policy that addresses the treatment and common issues pertaining to transgender students in elementary and secondary schools.

Additionally, ADF is seeking to add two teachers to the suit pending the court’s approval.

A spokesperson for Loudoun County Public Schools did not immediately respond for a request for comment.

Had to reinstate Tanner then the Virginia Supremes tell you to take a hike yet you continue to spend more taxpayer dollars on a losing cause must be democrat controlled!