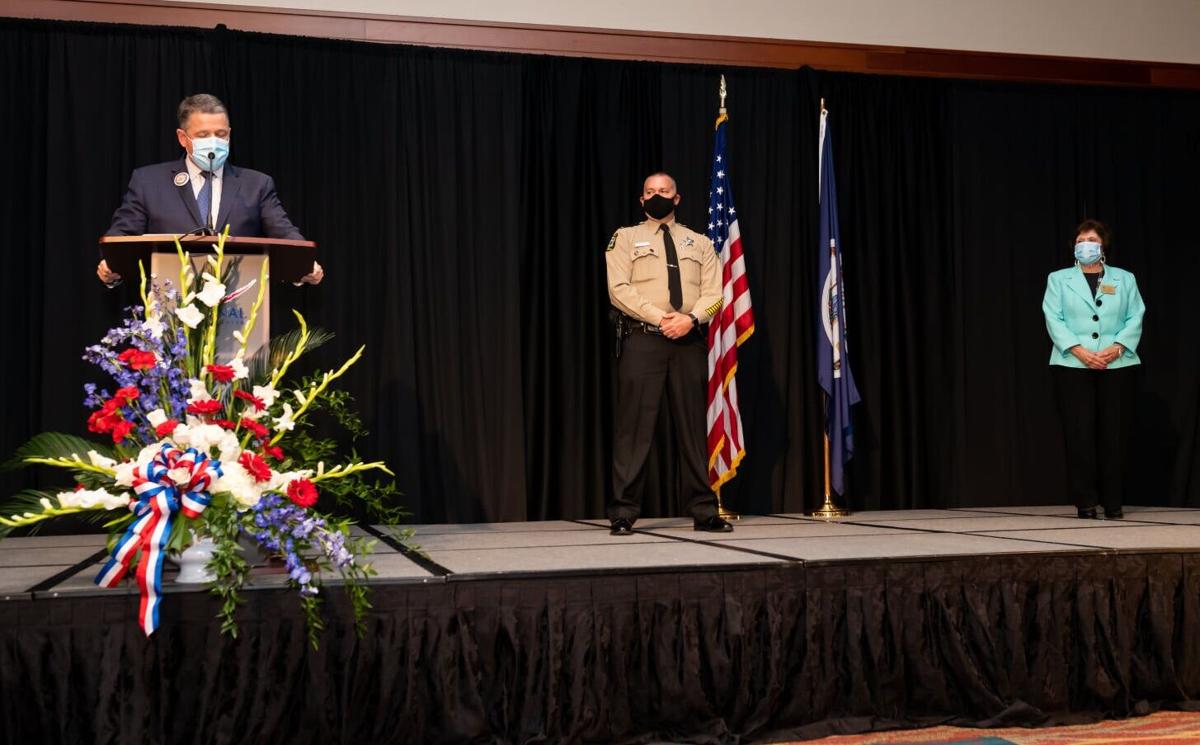 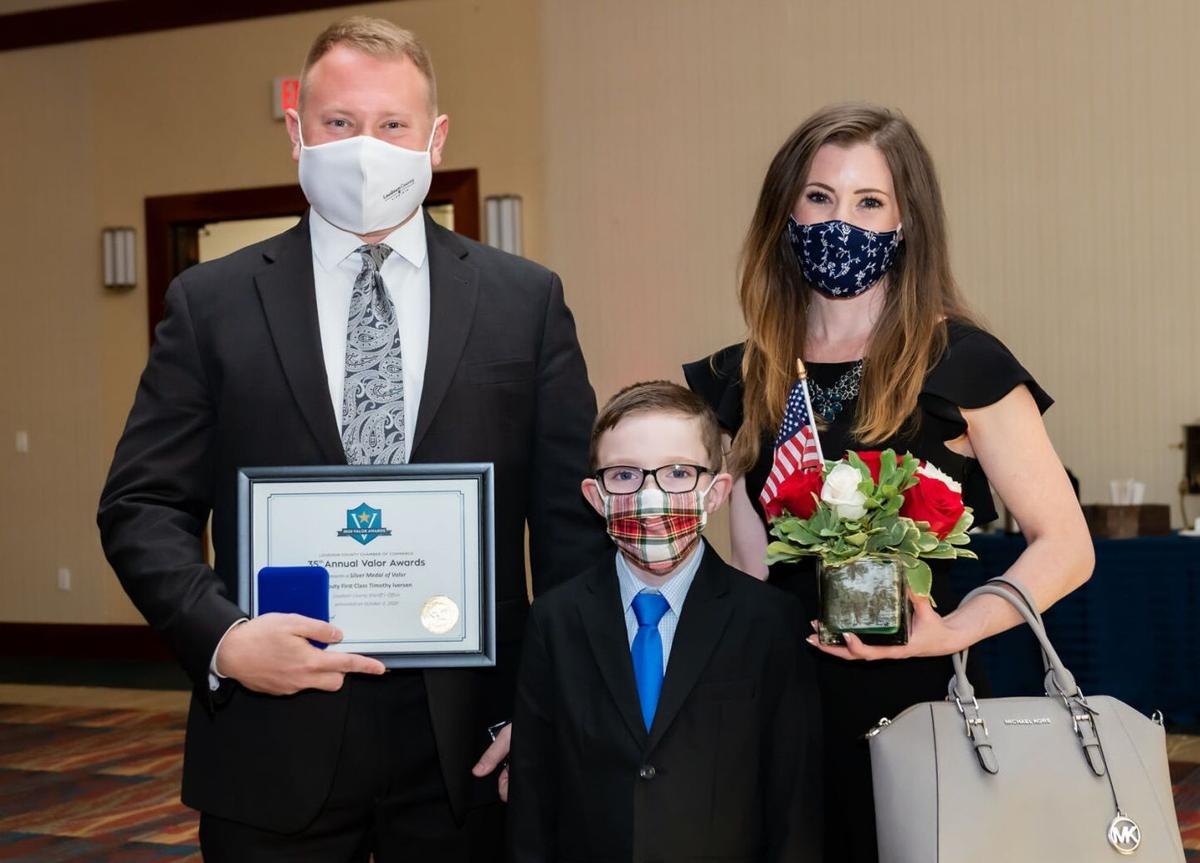 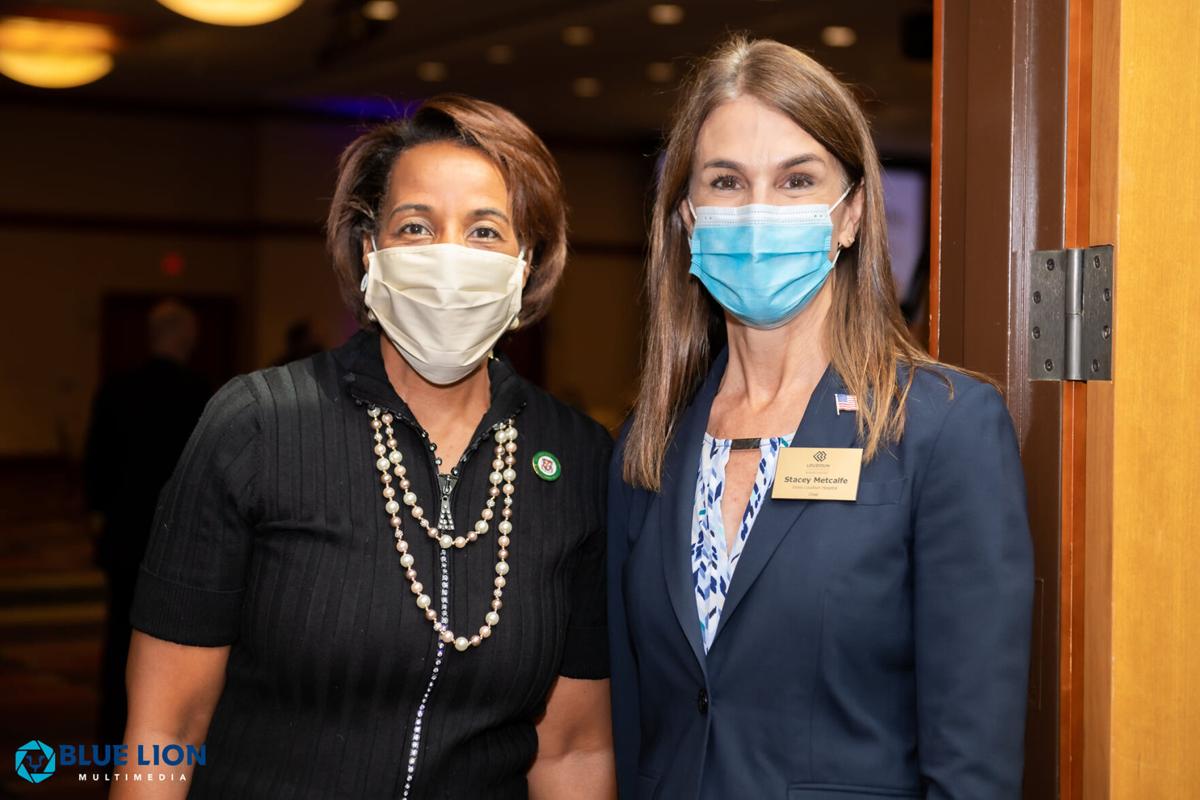 Loudoun County Board of Supervisors Chairwoman Phyllis Randall, left, and Loudoun Chamber Board Chairwoman Stacey Metcalfe smile behind masks at The National Conference Center in Leesburg.

Loudoun County Board of Supervisors Chairwoman Phyllis Randall, left, and Loudoun Chamber Board Chairwoman Stacey Metcalfe smile behind masks at The National Conference Center in Leesburg.

Members of the local business community gathered both virtually and at The National Conference Center in Leesburg to honor first responders and meritorious civilians during the Loudoun County Chamber of Commerce’s 2020 Valor Awards on Oct. 2.

The Chamber in total honored 92 career and volunteer first responders for their heroic actions within the Loudoun community in 2019, as well as 17 civilians who provided assistance to others in “time[s] of desperate need,” according to the event’s printed program.

“While the Loudoun Chamber takes great pride in honoring our public safety and civilian heroes, these courageous individuals honor each of us far more than we could ever begin to repay,” Loudoun Chamber Board Chairwoman Stacey Metcalfe said to open Friday’s festivities.

Metcalfe also alluded to a small table set to the side of the stage, on which sat a single place setting with a flower, lit candle and plaque honoring public servants who gave their lives in the line of duty, for whom in-person guests exhibited a moment of silence.

“[Epple] has implemented several innovative programs to foster positive relationships within his school community, all with public safety education in mind,” Howard said.

Among those programs is an interactive, full-scale Mock Trial program for students studying civics and government, as well as a traffic safety program. Epple has also promoted the Arrive Alive seatbelt-wearing campaign within Stone Hill.

Howard proceeded to present the evening’s Lifesaving Awards, Unit Citation Awards and Meritorious Civilian Awards, as well as Silver and Bronze Medals and Certificates of Valor, honoring first responders and civilians involved in a total of 24 incidents.

Of particular note was Incident Six, in which 39 individuals — including firefighters, emergency medical technicians and three civilians — assisted two people trapped in a car that had been crushed under a large tree in Purcellville on Nov. 22, 2019.

Howard also awarded Silver Medals of Valor to Dept. Katherine Grimley and Dept. First Class Timothy Iversen for their efforts to apprehend Douglas Johnson, who shot Grimley once and Iversen twice on Dec. 24, 2017.

“Because the criminal case involving this incident was not resolved until 2019, the Chamber did wait until this year to recognize this incident,” Howard explained.

Johnson, 42, was sentenced to 74 years in prison last week for having shot the two deputies.

Also awarded for this incident were Depts. Justin Nyce and Hao Lu, as well as Deputy First Class Daniel Clarke, who helped detain Johnson after the shooting, offered aid to Grimley and Iversen, and called in backup units to tend to the injured deputies.

“The quick actions by Depts. Nyce, Lu and Clarke to care for the injuries sustained by Dept. Grimley and DFC Iversen were critical in allowing the two deputies to recover fully from their wounds and return to active duty within a few months’ time,” Howard said.

“Throughout all of the anxiety and suffering caused by this virus, many of our fellow Americans have provided extraordinary levels of dedication and support to care for the sick and dying, risking their own health and safety just to do their jobs,” he said. “Our health care heroes chose their profession because of their passion for caring and preserving their fellow human beings.”

To close the event, Howard referred to the pandemic to exemplify the risk each first responder assumes when doing their job.

“In this time of public health crisis and social unrest, many of us have the privilege of being able to work from home or from a remote location, and that is positive, because it helps limit the spread of the coronavirus that causes COVID-19. But there are many in our community and other communities who cannot work remotely, who must show up, and show up for every shift,” he said. “Today, I trust that everyone here and those watching online have gained a deeper appreciation for the commitment that our career and volunteer emergency first responders — and our health care heroes — have made to keep Loudoun County a safe, secure and healthy community.”

A full list of honorees is available at bit.ly/3nmDAcj.