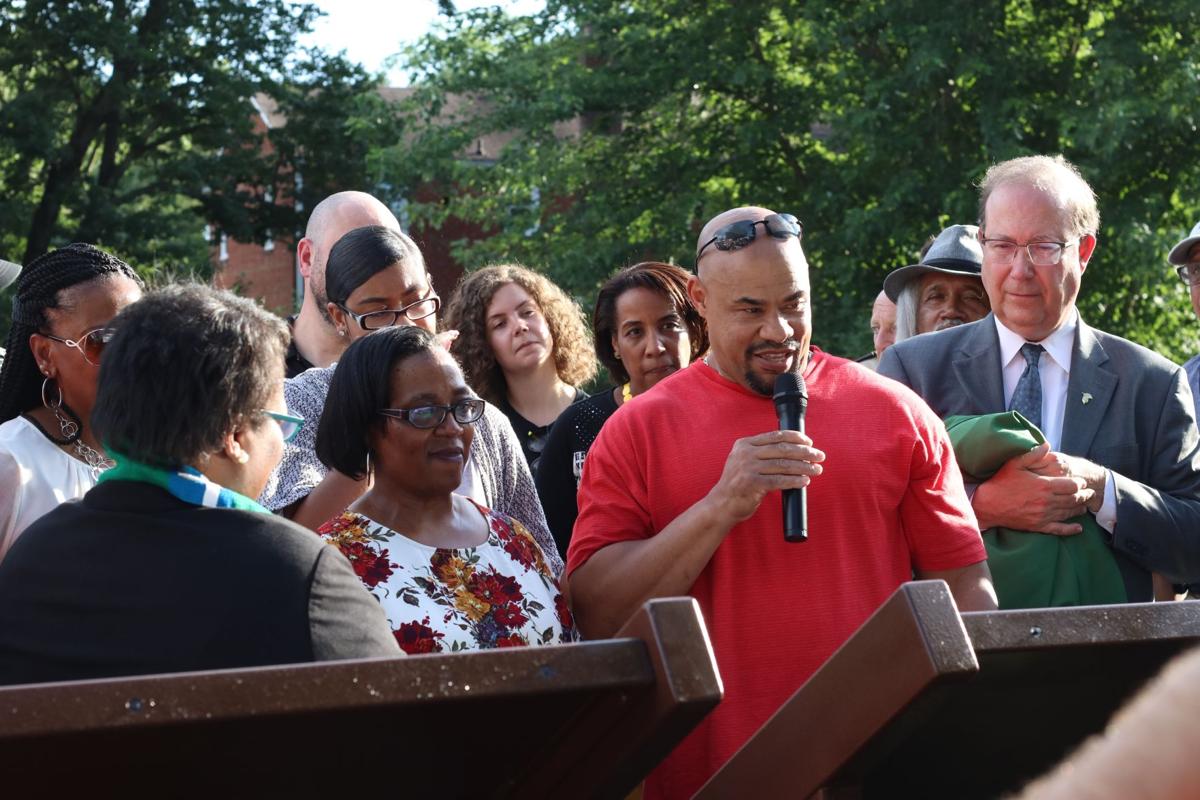 Cousins Michelle Lane and James Howard react to the unveiling of the first lynching memorial marker in Loudoun County, which remembers their great grand-uncle Orion Anderson. He was hanged at the age of 14 in 1889. 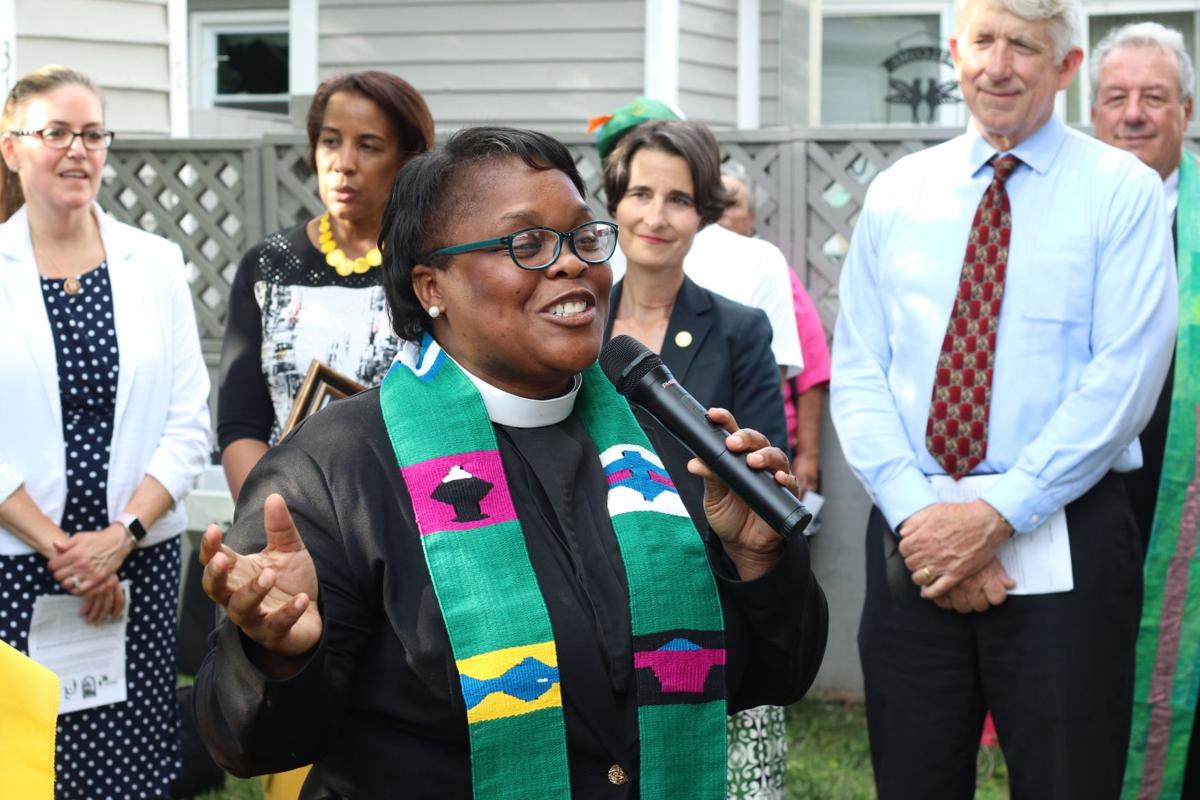 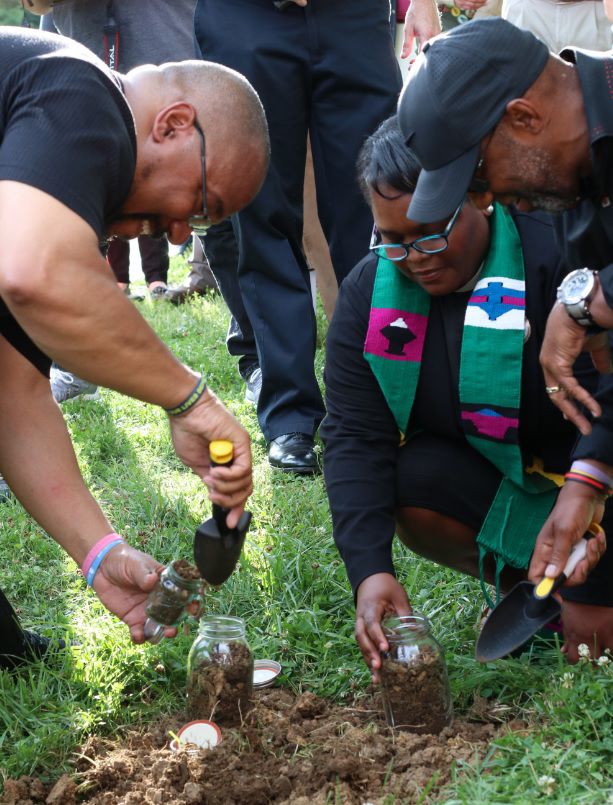 Years before lynching was outlawed in Virginia, a black teenager in Loudoun County was a target of the gruesome act for allegedly scaring a white, teenaged girl.

Cousins James Howard and Michelle Lane didn't know about their great grand-uncle who grew up in the late 1800s.

It's understandable why Howard, Lane and other family members didn’t know about their relative until last week. That's because their uncle did not live his adult life – he was hanged and shot at the age of 14.

But now, the descendants and hundreds of other Loudoun County residents will remember their late family member, Orion Anderson, and where he was hanged.

Howard told the Times-Mirror he was overwhelmed by the dozens upon dozens of people who came out for the ceremony on a steamy Wednesday night. Joined by his cousin, his wife and daughters, Valerie and Jazmyne, Howard said he hopes the opportunity will be used to celebrate his uncle’s life and bring awareness to the history of lynching.

“We are not celebrating the lynching. We are celebrating his life just like you would any relative,” Howard said. “I think this gives him a voice in life, because otherwise he would’ve been known as somebody that was just lynched, and I’m glad they were able to research and find the families, otherwise nobody would’ve known.”

Located in southwest Leesburg, near the intersection of Washington & Old Dominion Trail and Harrison Street, the first marker was established to remember Anderson, who was targeted for allegedly scaring a white, teenaged girl in 1889.

But before Anderson's day in court, researchers say a small mob broke into his jail cell, dragged him to the Leesburg freight depot in southeast Leesburg, hanged him and shot him.

ADAMS Boy Scouts Troop 2019, with an escort from the Leesburg Police Department, led the half-mile walk through town.

At the site where Anderson would meet his death, several people spoke as a soil collection was taken up, flowers were laid out in remembrance and the marker was unveiled.

"We’ve come a very long way since what happened to Mr. Anderson, and don’t let anybody tell you we haven’t,” Randall said. “ … but we have a long way to go, and we will do it standing together, standing in peace and standing in love.”

Wexton, who commended the organizers for their work, shared that one of her most memorable trips since being elected to Congress last November was her visit to Alabama to tour the Memorial for Peace and Justice, which holds one of the largest historical records collection of lynchings.

“The only way that we will be able to move forward is by recognizing our past and not repeating it," Wexton said. “The only way we are going to lead Virginia into the future that we want is by recognizing and reconciling with our past, and events like this and groups like the Loudoun Freedom Center are so helpful in helping us do that.”

All the lynching victims were initially believed to be between the ages of 18 and 25, but further research concluded that Anderson was just 14 years old, prompting historians to begin a search for all of the victims’ descendants. Previous records showed Anderson to be around 19 and 20.

Shortly after Loudoun County NAACP member Phillip Thompson, the organization's previous president, announced efforts to establish the markers last summer, the Remembrance and Reconciliation Initiative began with a group of researchers investigating the descendants of those lynched. Graduate students from George Mason University's School for Conflict Analysis and Resolution aided in the process through research and discussion.

Efforts to establish the remaining two markers are ongoing. Community members with additional information about the lynchings are encouraged to reach out to the members of the Loudoun Freedom Center or Loudoun County NAACP.

"This is not a long time ago. This is just a generation ago, and we need to remember this,” Thompson said.

Once the project is completed, the soil from each site will be collected and sent to the National Memorial for Peace and Justice, also known as the National Lynching Memorial.

Virginia Attorney General Mark Herring (D), who is still dealing with backlash following this year's admission that he wore blackface as part of a costume in the 1980s, attended Wednesday's ceremony. Herring said the marker is a step that Loudoun is taking toward justice, equality and reconciliation.

"I think that we as a community should be proud that we are doing this together. Because not every community in Virginia is ready or willing yet to take that important step,” the attorney general said. “It says something about the character of this community that we are strong enough to be honest and unafraid to do the right thing in commemorating the life of Orion Anderson. And hopefully soon we will do the same for Page Wallace and Charles Craven. Orion Anderson’s life ended here in 1889. But with this marker, his name, and his story, will live on.”

The best part of this is watching the racist if Loudoun lead by the commenters on this article’s heads explode. Well get out your pain pills folks cause there is much more to come. Time for Virginia to memorialize it’s real history.

If it were not for articles like this you would have nothing to post about. You are a one trick pony and race baiting is your game.

Whoaaaa!! Did I read that right? AG Mark Herring is suggesting we erect memorials to a rapist and a murderer? There is a reason the memorial was erected to a lynching target whose "crime" was "scaring" some girl. It hardly seems a crime at all. But suggesting a memorial to heinous felons whose claim to fame is a mob killed them outside a trial? Has he lost his mind? What is he going to propose next... is Herring going to propose erecting a memorial to the killer of Nabra Hassanen - Darwin Torres - because the red carpet was not rolled out to the illegal immigrant "victim" from El Salvador? This corrupt politician (recall Herring had to pay $100K's because he discriminated against women in the AG's office) has surely lost his mind.

You make it sound like it’s a monument or something great. You have really over reacted to that one and blown it out of proportion. It’s a marker that marks the place where an event happened. There are markers all over Virginia, you pass them on the highway. I didn’t realize that Darwin Torres was a victim of lynching, where did you get that from? He got his trial, these others didn’t. If you feel so strongly about it I would suggest that you email Herring and explain yourself. Share the reply with us.

Has Wexton accomplished anything since taking office? This is an honest question and I'm not being snarky. I haven't heard of anything but may have missed it.

yes...she has introduced and supported legislation in many areas that her constituents favor. We are still waiting for the Senate to take these bills up. The failure of the Senate to do so is not the fault of a representative. What do you think would be a measure of "accomplishing anything"?

Actually she has outpaced many of the other representatives on the amount of legislation she has sponsored and co-sponsored. She has also resolved over 200 issues that her constituents have asked for her help on.

Hero's get statues. General Lee was no hero. He was the worst military strategist this country had ever seen, until Donald Rumsfeld came along.

No that was probably Westmoreland. Not Lee , Lee came from the same school all of the Northern Generals came from and used the same tactics.

Um, Picket's Charge? Lee was much loved by his troops but he was a terrible tactician.

Will there ever be articles written or condemnation about what Sherman did to Georgia and the multitudes who starved to death as a result?? - just curious..

If I remember correctly there are alot of books on Sherman's march.

You're right. We should put up a statue of ol' Burnin' Sherman to remind Confederate sympathizers what happens to turncoats.

Always good to preserve history instead of tearing down statues like the leftists do....Just not sure why Herring didn't put on his black face costume he was so proud of...

You can preserve history in books and on line and in museums. The rest of your post was childish and [offtopic]