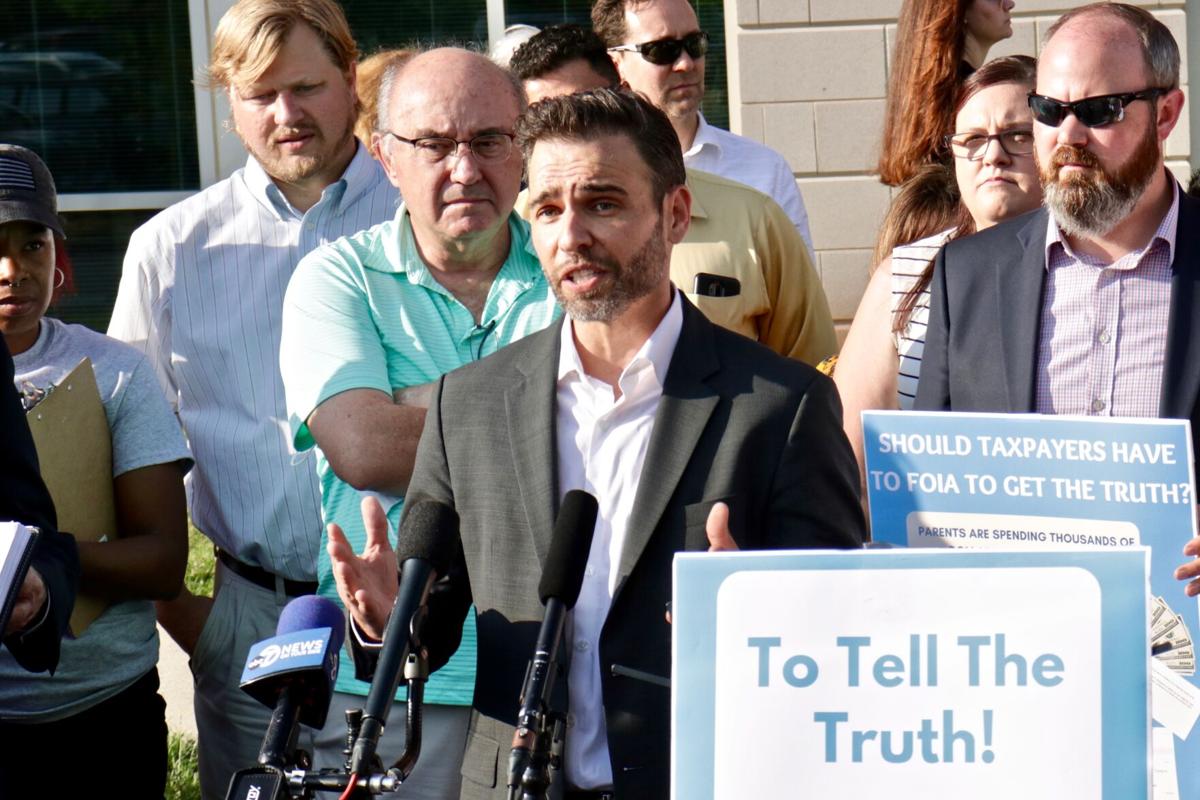 Ian Prior, executive director of parent group Fight for Schools, speaks against Loudoun County Public Schools’ alleged adoption of critical race theory outside the school system’s administrative offices on May 25. 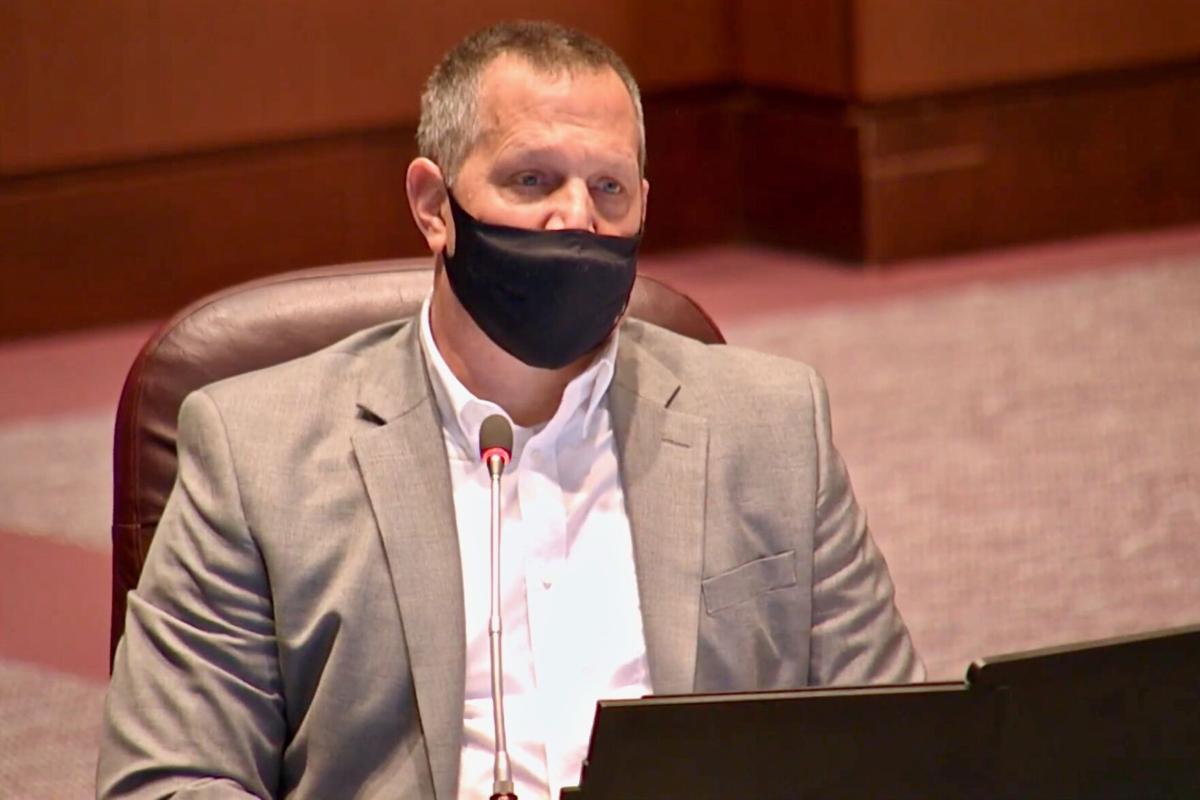 Ian Prior, executive director of parent group Fight for Schools, speaks against Loudoun County Public Schools’ alleged adoption of critical race theory outside the school system’s administrative offices on May 25.

Loudoun County Public Schools Interim Superintendent Scott Ziegler on Tuesday reiterated his prior claims that the school system has not adopted critical race theory, a subject of ongoing local and national controversy.

“It is not something that we are teaching in Loudoun County Public Schools,” he said.

Ziegler joined Loudoun County School Board and other LCPS administrators for an equity workshop Tuesday evening.

Meeting participants presented information and engaged in discussion regarding the school system’s efforts to make instruction, staff hiring and training, and other aspects of LCPS more equitable for its increasingly diverse student and staff population.

Early in the workshop, LCPS Director of Equity Lottie Spurlock said educational equity refers not only to race, but also to “gender, ZIP code, ability, socioeconomic status or languages spoken at home.”

For months, many in the LCPS community have zeroed in on the teaching of race-related topics in the classroom, accusing the school system and the School Board of employing critical race theory in employee training and in the classroom.

As published by non-profit journalism school and research organization Poynter Institute, critical race theory is an academic framework that “holds that racism is part of a broader pattern in America: It is woven into laws, and it shows up in who gets a job interview, the sort of home loans people are offered, how they are treated by police, and other facets of daily life large and small.”

The framework dates back to the work of Harvard Law School professor Derrick Bell in the 1970s and was later developed by legal scholars including Kimberlé Crenshaw, Neil Gotanda, Gary Peller and Kendall Thomas, per Poynter.

Ziegler said Tuesday that critical race theory is “a subject for academics originally used to explain portions of the law and legal research,” and that it is now used “most often in terms of theoretical research.”

Along with P.A.C.T., another local organization called Fight for Schools has led the community outrage against LCPS for allegedly adopting CRT. Fight for Schools is led by Ian Prior, a Loudoun County parent and former spokesman for President Donald Trump’s Justice Department.

Prior and others have criticized LCPS for adopting critical race theory under the guise of the school system’s “Culturally Responsive Framework,” a document drafted in June 2020 in response to a series of race-related controversies in LCPS during the previous year.

“Nobody’s saying that Loudoun County Public Schools or other schools are teaching ‘Critical Race Theory 101’ like they would teach physics or chemistry,” Prior told WJLA last month, “but it is a broad lens that’s implemented through how teachers are trained and how those trained teachers teach our children, which is to view America, to view our institutions, to view our culture, tradition and language all based on systemic racism.”

Race-related controversies within LCPS since 2019 include allegations of discriminatory practices relating to the Academies of Loudoun admissions process, as well as numerous reports of racial slurs being used in the classroom.

LCPS hired California-based consulting firm The Equity Collaborative in 2019 to perform a “Systemic Equity Assessment,” which was submitted to the division in June of that year.

Ziegler said in a statement in March that the assessment said LCPS “was found to need improvement” in the areas of “accountability, hiring practices and professional development” when it comes to equitable education.

He said LCPS staff does undergo equity training, while students receive no such official training. Officials at the Tuesday meeting referred to public comment that Michael Mullins, a world history and government teacher at Aldie’s John Champe High School, offered at the May 25 School Board meeting to endorse staff equity training.

He continued, “I’m here to say that we should continue to do it. We should do more of it.”

Ziegler also referenced the February 2019 memo #050-19 from Virginia Superintendent of Public Instruction James Lane, saying community members will often fallaciously refer to it as “proof” that public schools in the commonwealth are ordered to teach CRT.

The memo includes a section titled “Dr. Lane’s February Reading List,” which Lane said comprises “several pieces that I and other members of the VDOE staff are reading … based on recommendations that we have received.”

Among the listed works is “Foundations of Critical Race Theory in Education” by Edward Taylor, David Gillborn and Gloria Ladson-Billings, a textbook originally published in 2009 that “documents the progress to date of the CRT movement [and] acts to further spur developments in education,” according to the official book description.

Ziegler argued that Lane’s memo includes “no recommendation that superintendents read” the book and is “just simply sharing information.”

Slevin responded, “We acknowledge that our students and our families come to our school system with different experiences … and I guess the recognition of that difference connects to the idea of critical race theory, that people do have different experiences in our society and institutions in our society. The [“Culturally Responsive Framework”] is primarily on what we can do about that … and we are trying to give [our] schools tools to address those differences.”

In concluding his rebuttal against allegations that LCPS employs critical race theory, Ziegler quoted the first half of Prior’s aforementioned statement to WJLA: “Nobody’s saying that Loudoun County Public Schools or other schools are teaching ‘Critical Race Theory 101’ like they would teach physics or chemistry.”

The interim superintendent did not, however, quote the second half of Prior’s statement, in which Prior alleges LCPS implements critical race theory as “a broad lens” affecting teacher training and student curriculum.

“It is telling about the credibility of the LCPS administration on this issue,” Prior said in a Wednesday email to the Times-Mirror regarding Ziegler’s truncated quote.

Prior said Ziegler “provided misinformation to the public by … leaving out the second part of the quote which contained the argument we have been making all along and that LCPS is unable to credibly refute.”

We have the receipts you lying pos!