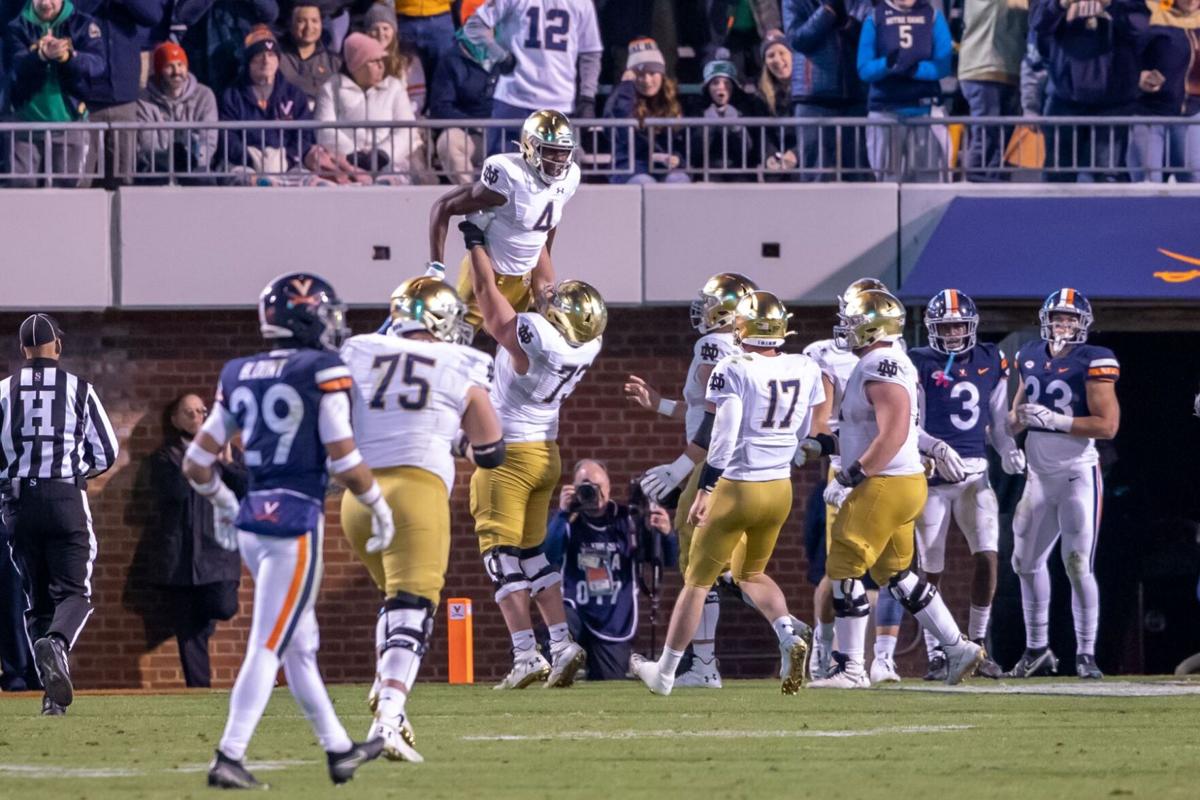 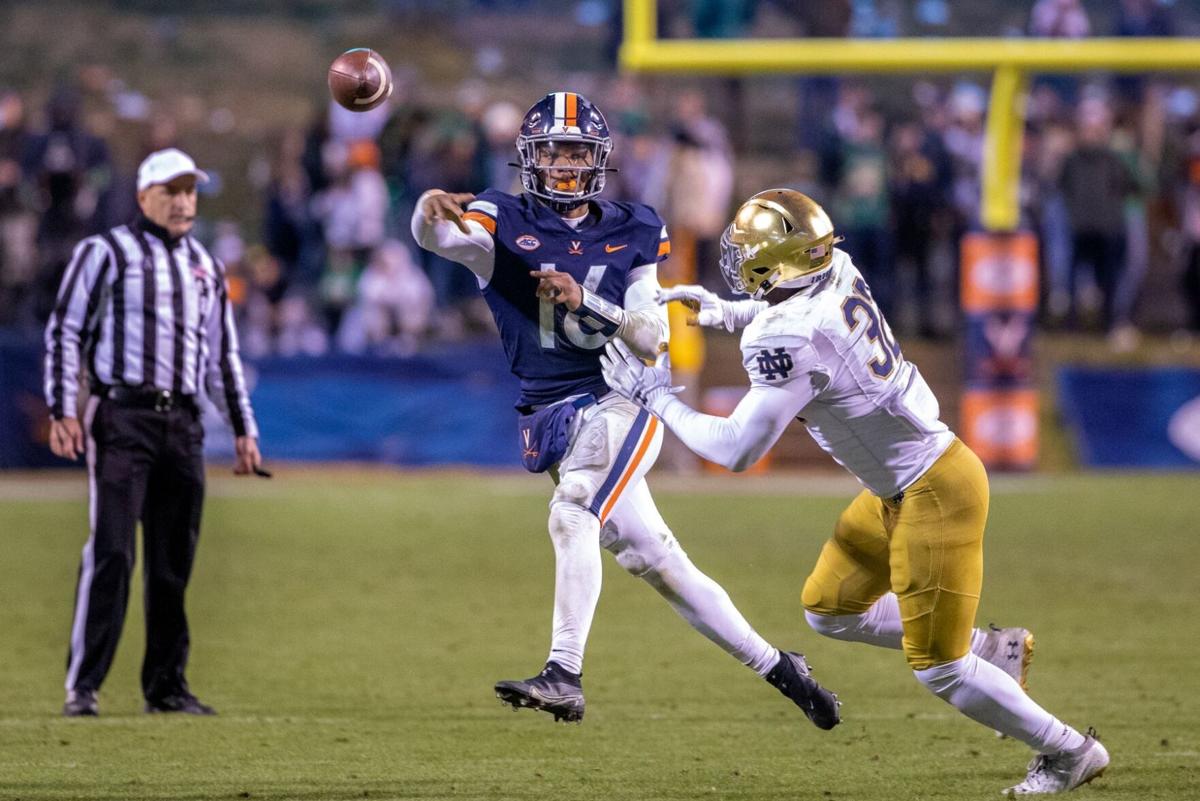 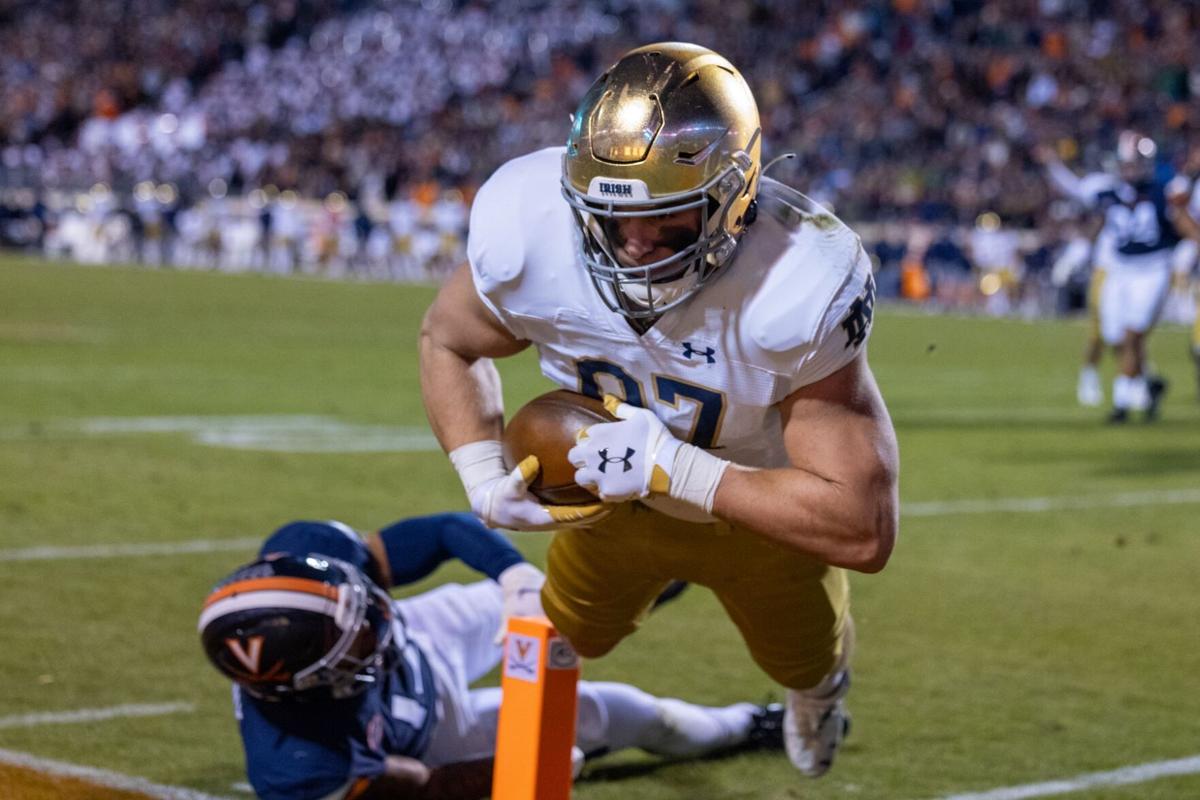 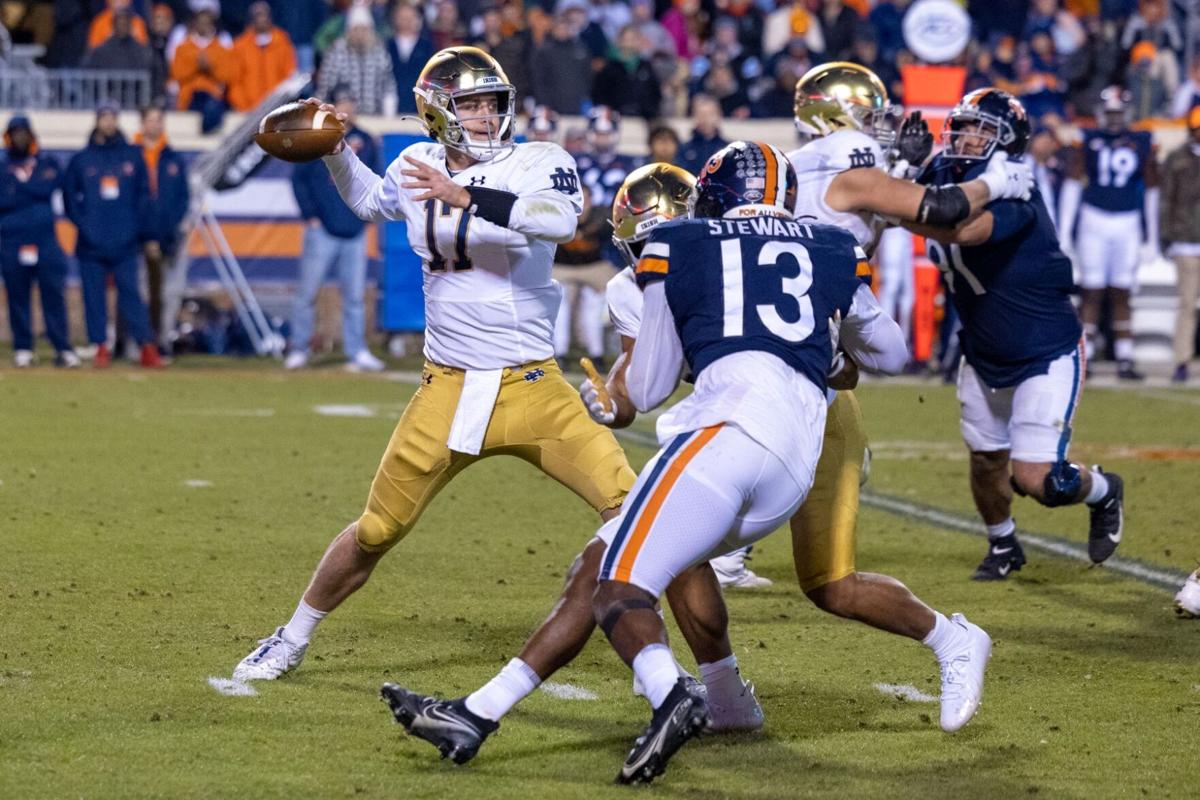 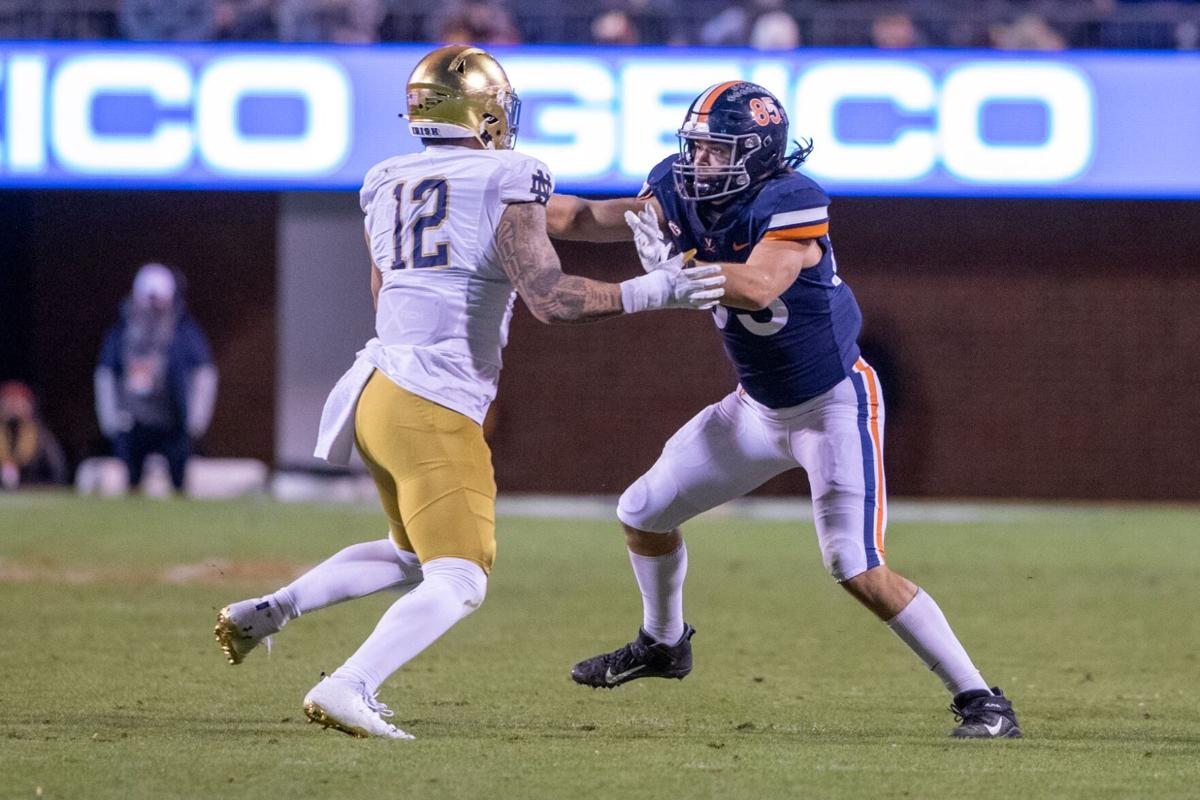 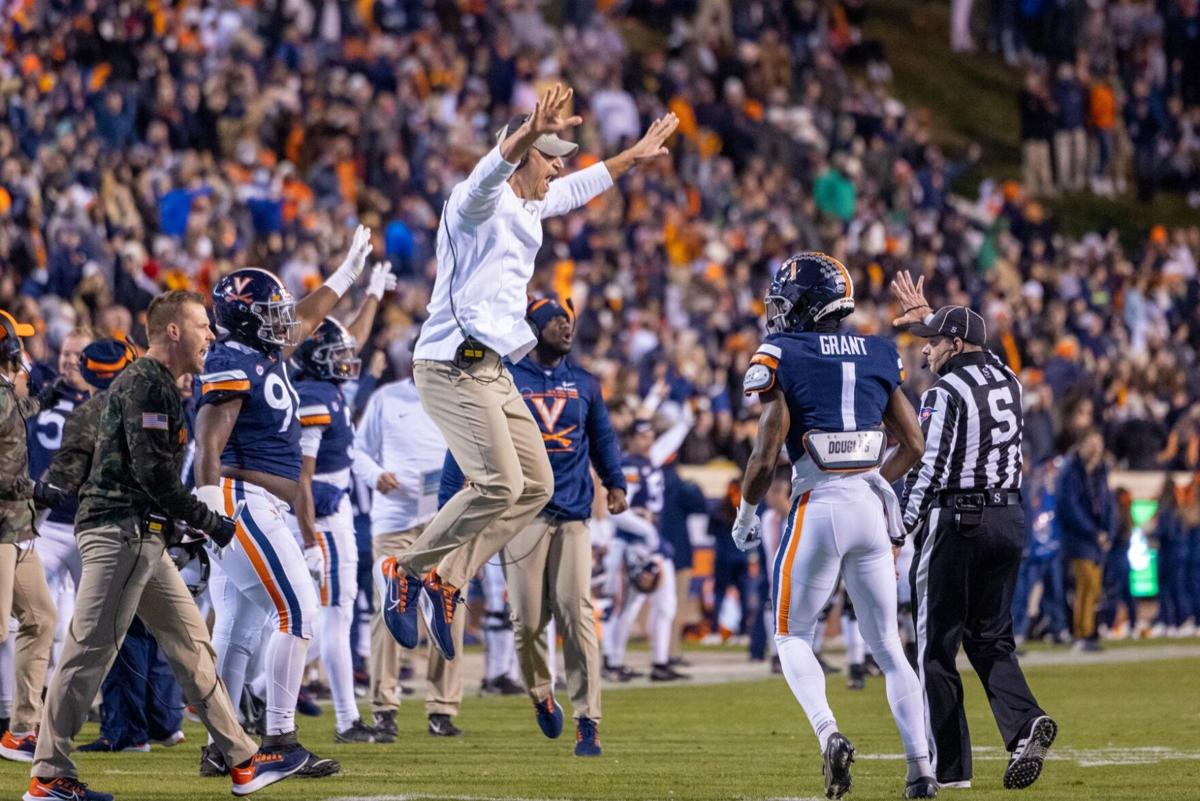 Virginia players and coaches rejoice following a defensive stand on fourth down. 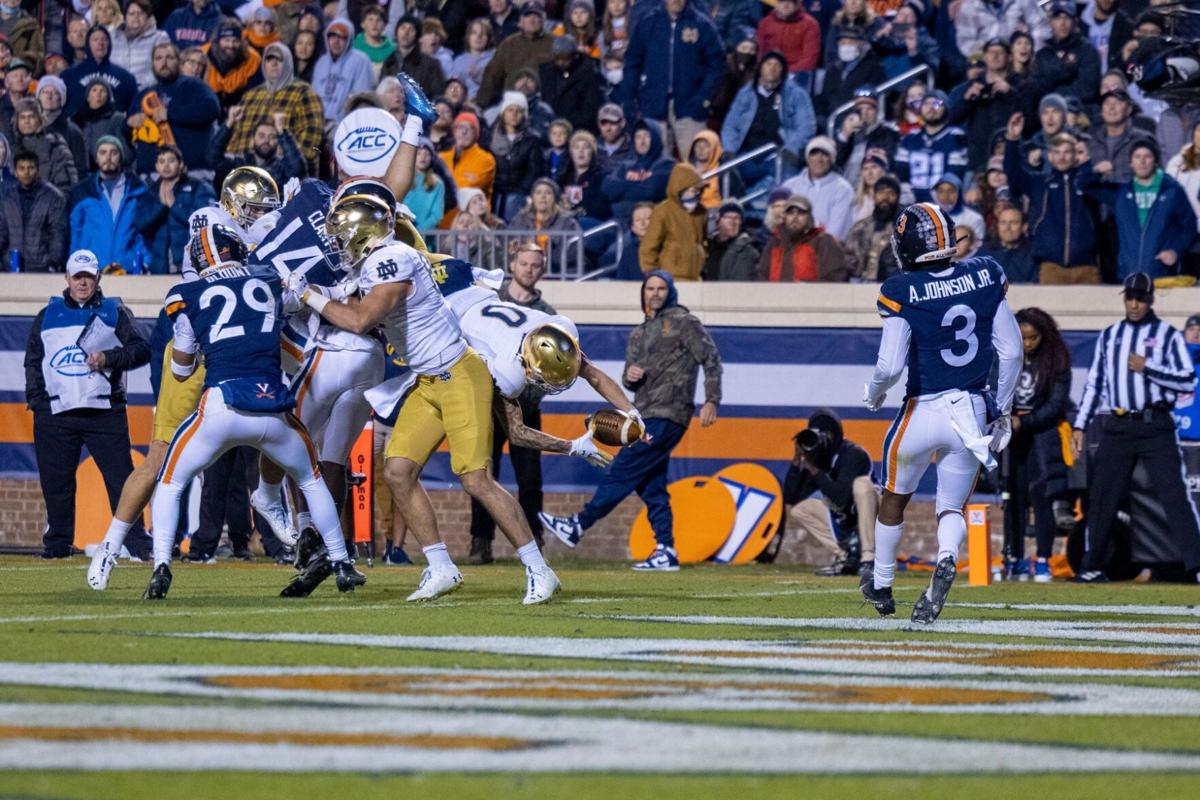 Notre Dame receiver Braden Lenzy dives into the end zone for a touchdown early in the second quarter. 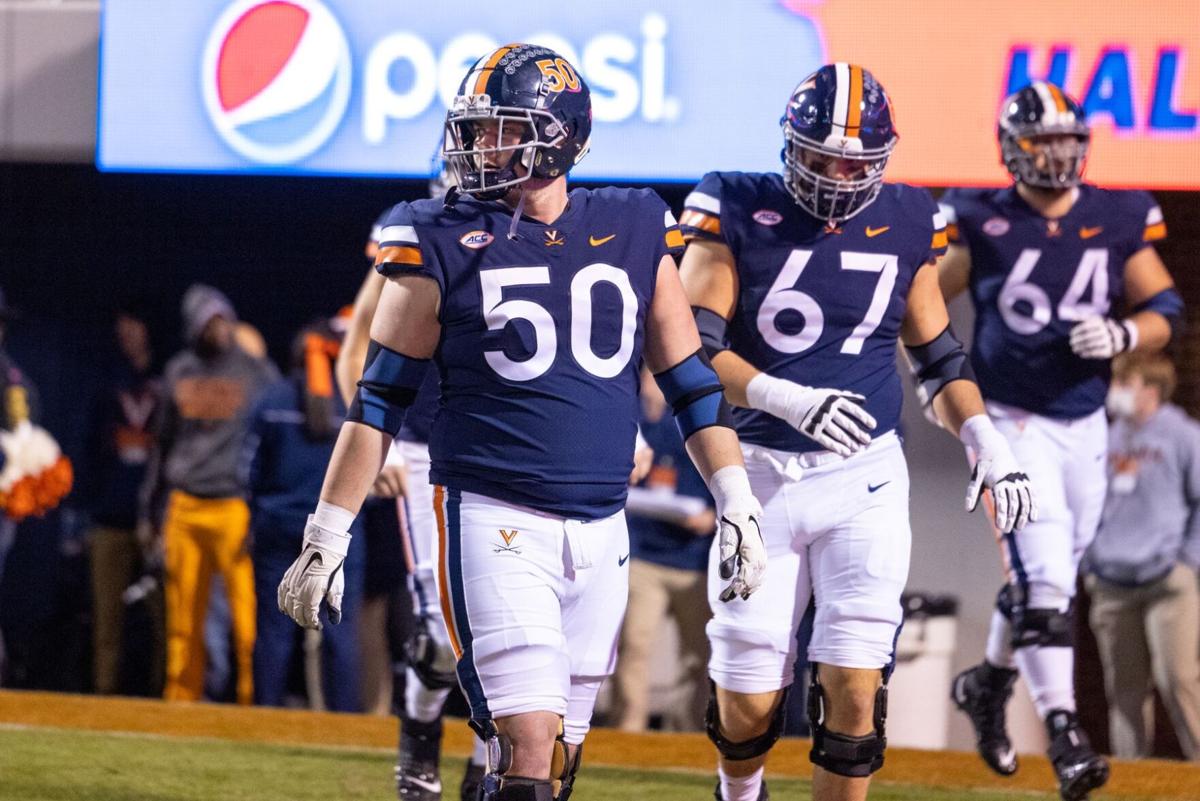 Virginia senior defensive lineman Tommy Christ, No. 50, is a graduate of Dominion High School in Sterling.

Virginia players and coaches rejoice following a defensive stand on fourth down.

Notre Dame receiver Braden Lenzy dives into the end zone for a touchdown early in the second quarter.

Virginia senior defensive lineman Tommy Christ, No. 50, is a graduate of Dominion High School in Sterling.

CHARLOTTESVILLE, Va. (AP) — Notre Dame coach Brian Kelly said the No. 7 Fighting Irish had a “tough week” with more than a dozen players battling a flu bug that kept some of them out of the lineup Saturday night against Virginia.

The ones able to play were more than enough.

On a night when a 101-degree fever kept defensive end Myron Tagovalia-Amosa out of the lineup, Rylie Mills moved over from tackle and had three sacks. In their first game without star wide receiver Avery Davis, who tore an anterior cruciate ligament last week against Navy and is out for the year, Braden Lenzy and Kevin Austin both caught scoring passes.

“They had a mindset with all that that this was the challenge they wanted,” coach Brian Kelly said of his team.

Coan connected with Michael Mayer from 6 yards, Lenzy from 4 yards and Austin from 15 yards for the Fighting Irish (9-1, No. 9 CFP), who also stretched their road winning streak against teams from the ACC to 11 games.

“Going into the week, when you lose a leader like AD, just someone who has put up a lot of good numbers, been a great player for us, it was definitely harped on to be more focused in what we do,” Lenzy said.

Virginia (6-4) played without quarterback Brennan Armstrong, who leads the nation in total offense with an average of 425.3 yards but did not dress after sustaining a rib injury in a loss to No. 14 BYU two weeks ago.

The Cavaliers play at Pittsburgh on Saturday, with the winner gaining an upper hand in the ACC’s Coastal Division race, and Mendenhall said he had no update on whether Armstrong would be available with another week.

“It looks better every day,” he said, while still placing the star quarterback’s status as day-to-day.

Jay Woolfolk, the first true freshman to start at quarterback for Virginia since Bryan Shumock in 1977, was largely ineffective. He completed 18 of 33 passes for 196 yards, two interceptions and was sacked seven times.

“I thought Jay did a nice job,” Mendenhall said, adding that “the protection has to hold better. ... Jay’s processing takes longer whereas Brennan would have had the ball out much faster.”

The Irish, playing for the sixth time against a team coming off an open date, won for the fifth time in those games, keeping alive their hopes of playing their way into the four-team College Football Playoff. They have two three-win teams remaining on their schedule.

“We’re ascending as a football team,” Kelly said. “Any time you try to put a resume together, it’s about how you play later in the year.”

The Irish led 21-0 at halftime and had outgained Virginia 264-92. The victory was their 40th in a row against unranked opponents.

Notre Dame: Coan, who was benched for ineffectiveness against Virginia Tech before returning in the fourth quarter to lead a comeback, had no such issues against the Cavaliers. He was 15 of 20 for 132 yards when freshman Tyler Buchner replaced him after his third TD pass.

Virginia: The Cavaliers had tackling problems in their 66-49 loss at BYU two weeks ago, and despite a week off to get that fixed, the problem persisted against the Irish as running back Kyren Williams, Mayer and others routinely escaped the first hit. Williams broke three tackles on a 22-yard TD run.

The Fighting Irish wrap up their home schedule against Georgia Tech on Saturday.

Virginia travels to Pittsburgh on Saturday and can pull even with the Panthers in the Coastal Division — and have the tiebreaker — with a victory.