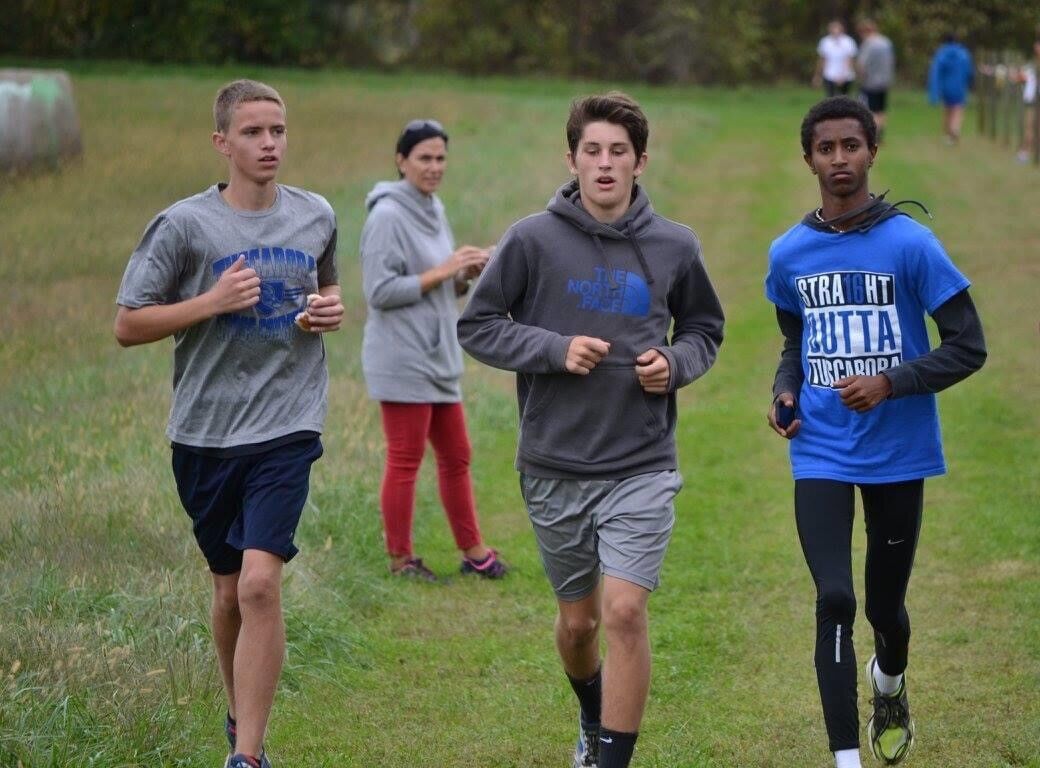 Ben Nibbelink, Derek Johnson and Fitsum Seyoum warm up together as Tuscarora High School teammates prior to a race during the 2015-2016 season. The running trio are now training partners competing at the college level. 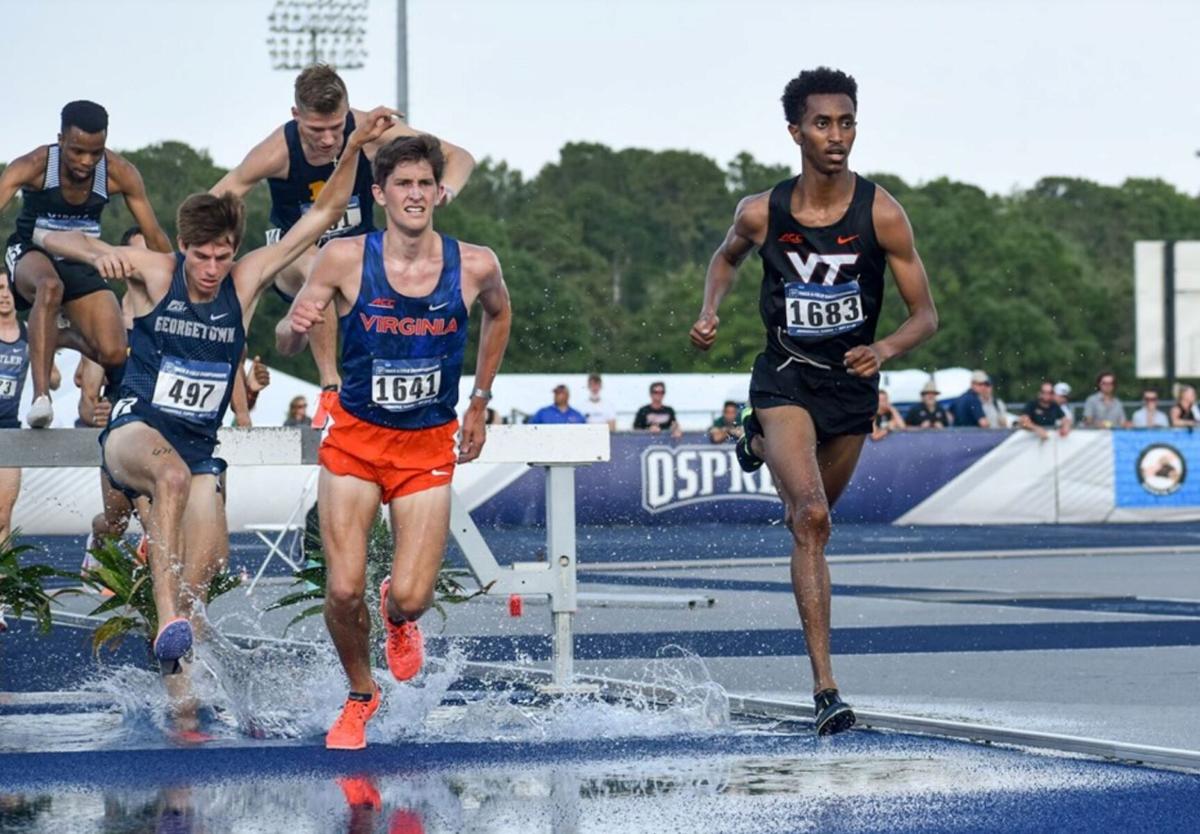 Fitsum Seyoum, right, and Derek Johnson lead the pack during a 3,000-meter steeplechase race at the NCAA championships.

Ben Nibbelink, Derek Johnson and Fitsum Seyoum warm up together as Tuscarora High School teammates prior to a race during the 2015-2016 season. The running trio are now training partners competing at the college level.

Fitsum Seyoum, right, and Derek Johnson lead the pack during a 3,000-meter steeplechase race at the NCAA championships.

Derek Johnson lined up in the third lane at Hodges Stadium in Florida, getting set to compete in his first NCAA championship race May 28.

As the pair prepared to run their signature 3,000-meter steeplechase race, Johnson and Seyoum were lined up as college rivals competing for Virginia and Virginia Tech, respectively.

Two minutes had gone by in the NCAA East preliminary race and the duo had already made their move into the top five of the 16 runner heat. The former high school teammates started to break away from the rest of the pack by the four-minute mark of the race. By the six-minute mark, that lead increased to 10 meters and ultimately to the finish line, with Seyoum placing first at 8:41.73, followed by Johnson 0.26 seconds behind him.

Along with Seyoum and Johnson, another former Tuscarora runner Ben Nibbelink competed in his first national championship meet. Nibbelink, a junior at Virginia Tech, set the Hokies’ program record for the one-mile race at the NCAA Indoor Track and Field prelims in February.

While the trio only competed together for one season of cross country and track and field during the 2015-2016 school year, they have since formed a lasting training group and friendship that has extended to the highest level of collegiate running. Johnson, Seyoum and Nibbelink hold a combined 11 all-state honors and seven all-region honors in track at Tuscarora.

Troy Harry has guided cross country and track and field teams at Tuscarora since the Leesburg school opened in 2010. Harry competed at LaSalle University, winning Atlantic 10 championships and NCAA qualifiers in various middle to long distance races. Now as a coach, Harry aspires for his runners at Tuscarora to want to push themselves to compete at the next level regardless of their experience or skill.

“I always wanted the kids that I coached to experience what I had,” Harry said. “Regardless of who it was, if they wanted to compete at that next level, I held them accountable. It was a lot of focus on the little things and putting into the sport what you want to get out of it.”

That mindset is what convinced Johnson, Nibbelink and Seyoum to pursue running full-time, instilling their complete trust in Harry’s training and that he would guide them on the right track to a collegiate roster spot.

Of the trio, Johnson was the only runner who lettered all four years at Tuscarora. Johnson convinced his classmate Nibbelink and a group of their friends to join the team in 2016. Nibbelink, a sophomore at the time, was formerly a soccer player who gave up his spring season of varsity soccer to focus on track.

Nibbelink thrived right away as a runner, but that success didn’t really sink in because of how good his teammates were. Nibbelink didn’t realize how good of a runner he actually was.

“It’s very rare to have two training partners that are running at that level at the same school,” Nibbelink said.

Nibbelink said Seyoum was his biggest role model that season. A senior at the time, Seyoum understood what it was to start running a year behind the rest. Seyoum also joined Tuscarora’s program his sophomore year simply to just give it a try.

He decided to continue with the program because of Harry’s consistent belief in his running ability. Harry helped Seyoum realize that he was talented and that he had to shift his focus towards running to be able to compete at the next level. The two would ride together to meets and practices and went on many runs together where they had ample time to talk about running and what it took to compete at the next level.

Along with his victory at the NCAA East prelims, Seyoum won Atlantic Coast Conference titles in the steeplechase in 2019 and 2021. He completed the race in 8:31.23 this year, qualifying him for the US Olympic Trials.

Johnson also qualified for the steeplechase trials. Johnson raced in his first NCAA Championship race on June 11, where he placed seventh with a time of 8:32.95. But that time ended up being .95 seconds past the Olympic trial standard time.

“With three laps to go, I made a move to try and get around some guys on the outside. But I didn’t fully commit to the move, and I ended up getting around only three guys,” Johnson said. “I saw that I could either tuck in or go to the lead, and I got scared of going to the lead.”

Fortunately, Johnson’s coach at Virginia found a spot for him in the TrackTown qualifier race just two days later. He ran a personal best of 8:28.72, securing a spot alongside Seyoum in the Olympic trials.

Though it was a shorter turnaround between races than Johnson had anticipated, overcoming fatigue and appreciating the grind are two things that he has learned to love about the sport over time.

Johnson was diagnosed with Lyme Disease during the first month of his senior year at Tuscarora. After pushing through it during the fall cross country season, Johnson still was not fully recovered once the spring track season arrived.

“I didn’t feel like I was competitive,” Johnson said. “I was losing to the guys that I had been beating, I wasn’t running as fast, and it didn’t feel good to run.”

Johnson still had his training partner Nibbelink to keep him motivated. The two were best friends throughout high school but acknowledged that they were each other’s biggest running rivals.

Now entering his senior year at Virginia Tech, Nibbelink also has to take extended time off from running. Nibbelink contracted COVID-19 in April, which led to a heart condition called Myocarditis. He was forced to sit out the entire outdoor track season and will likely miss the cross country season this fall.

Undergoing injuries and battling through adversity is not new to any of these runners. Tuscarora placed third in the Virginia 5A state finals during Johnson and Nibbelink’s senior year, a season where key injuries factored into that finish.

While Seyoum was able to escape the injury bug throughout high school, it caught up to him early in his freshman season at Virginia Tech. A stress fracture in his shin forced Seyoum to redshirt. In the fall of 2020, Seyoum began to notice a worsening pain in his groin area, to the point where it prevented him from finishing an 8K cross country race.

He learned that he was running with both a groin strain and a stress fracture in his femur. Seyoum started running again in January and began a recovery process consisting of a combination of pool training and other aerobic work, which got him back to racing full time during the indoor season.

“When you look and see everything they’ve had to overcome, it’s not surprising that in one of the most difficult races in track and field, these guys are excelling,” Harry said. “They know how to compartmentalize pain and discomfort and really push through all of that and drive for excellence.”