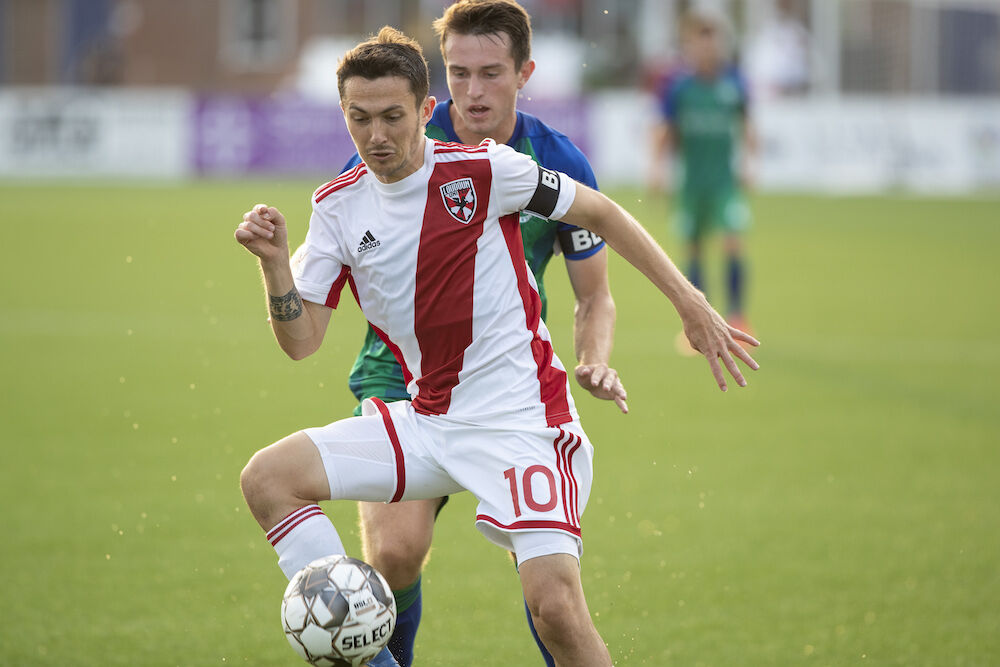 Loudoun United's Michael Gamble plays the ball in front of a Hartford Athletic defender. Hartford scored two goals in each half on its way to a 4-1 victory. 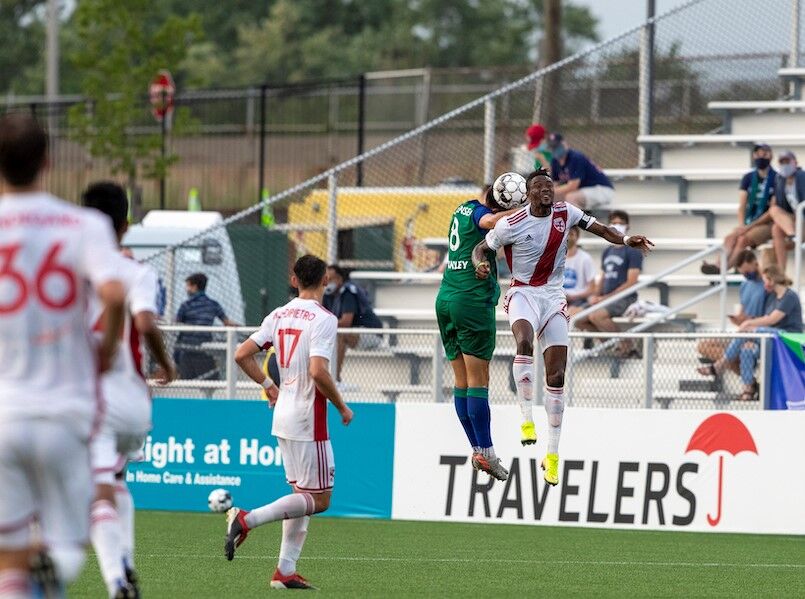 Elvis Amoh has scored two goals in three games for Loudoun United this season. Amoh has converted penalty kicks in each of the last two games. 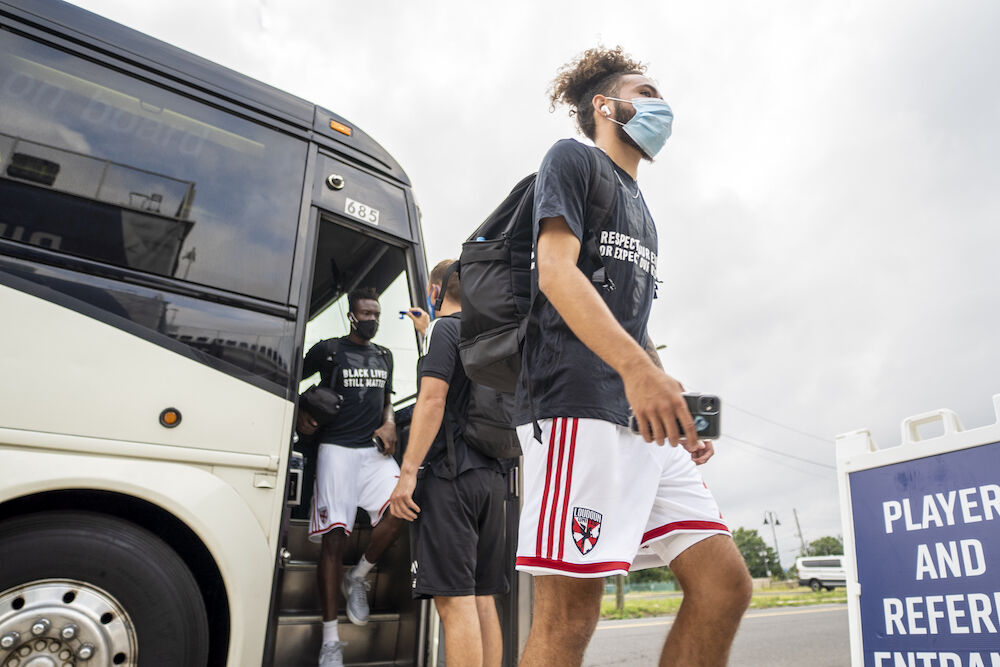 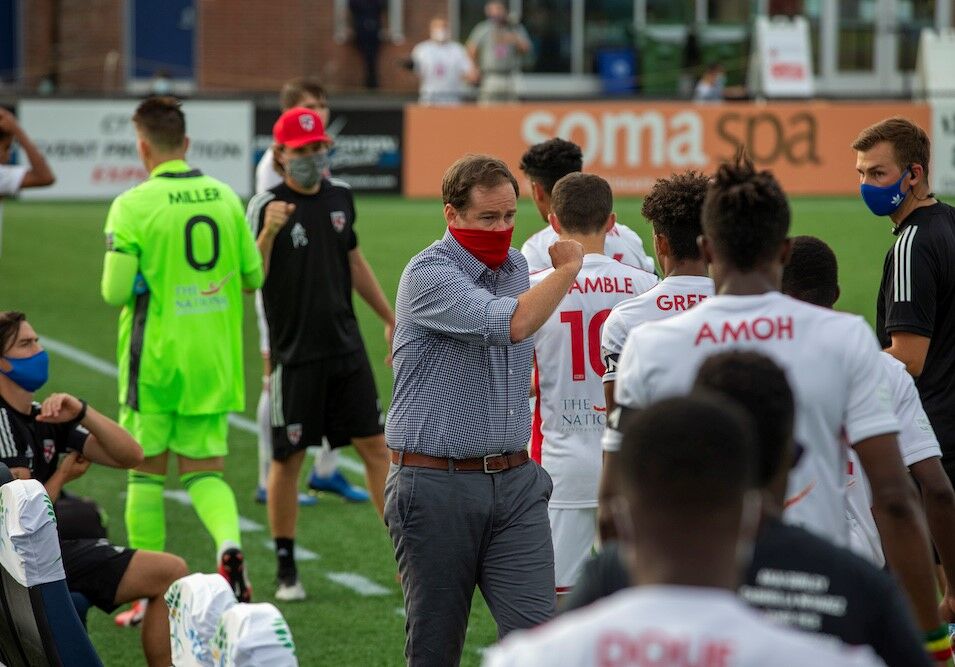 Loudoun United's Michael Gamble plays the ball in front of a Hartford Athletic defender. Hartford scored two goals in each half on its way to a 4-1 victory.

Elvis Amoh has scored two goals in three games for Loudoun United this season. Amoh has converted penalty kicks in each of the last two games.

Facing the same opponent at the same venue as their first game of the USL Championship restart 12 days ago, Loudoun United FC fell behind early against host Hartford Athletic and were unable to recover in a 4-1 loss Sunday night at Dillon Stadium in Connecticut.

After scoring the first three goals in a 3-1 home win over Loudoun on July 20, Hartford (4-1-0, 12 points) scored twice in the first 18 minutes of play Sunday to regain sole possession of first place in Group F.

With two games in hand, Loudoun United (0-2-1, 1 point) is tied for fourth place with the Philadelphia Union II (0-4-1). The top two teams from Group F advance to the playoffs, set to begin in October.

Following a pair of goals from Hartford's Ever Guzmán to open the scoring -- both assisted by Danny Barrera -- Loudoun United rallied to trim the deficit in half. Moments after Loudoun's Massimo Ferrin hit the left goal post with his shot, Loudoun earned a penalty kick.

For a second straight game, Elvis Amoh stepped up to take the penalty kick and once again converted his chance to pull Loudoun within 2-1 in the 21st minute.

Loudoun continued to push for the tying goal through the remainder of the first half and into the second half until Barrera scored in the 66th minute to extend Hartford's lead to 3-1. The hosts added another goal eight minutes into stoppage time to push the final margin to 4-1.

"We are disappointed with our slow start to the match. We made some naive errors on the goals," Loudoun United head coach Ryan Martin said. "But after the penalty save, we settled in and created a lot of opportunities. You can’t chase the game on the road against a team like Hartford."

Unlike the first meeting where Hartford dominated the stat sheet, Loudoun was credited with 12 shots (three on goal) in Sunday's loss and held a possession edge. Goalkeeper Colin Miller made a nice diving save on Guzmán's penalty kick in the 11th minute to keep Loudoun in contention.

"We feel like there was growth both individually and collectively since our last outing and I am extremely proud of the way we fought until the end," Martin continued. "We have to keep growing day by day and getting better each day. No one said it would be easy and this is a time the group has to be resilient and collective."

Loudoun United has more than a week to prepare for a stretch of four games during an 11-day span. The run of games starts with an Aug. 12 trip to New York and includes Loudoun's home opener Aug. 19 against Pittsburgh at Segra Field in Leesburg.

"We have a little break now, so we just need to make progress each day," Martin said. "We wish we played in three days instead of 10, but we have a good group with good character."

During phase 1 I said I would be happy with any sports. I take that back.