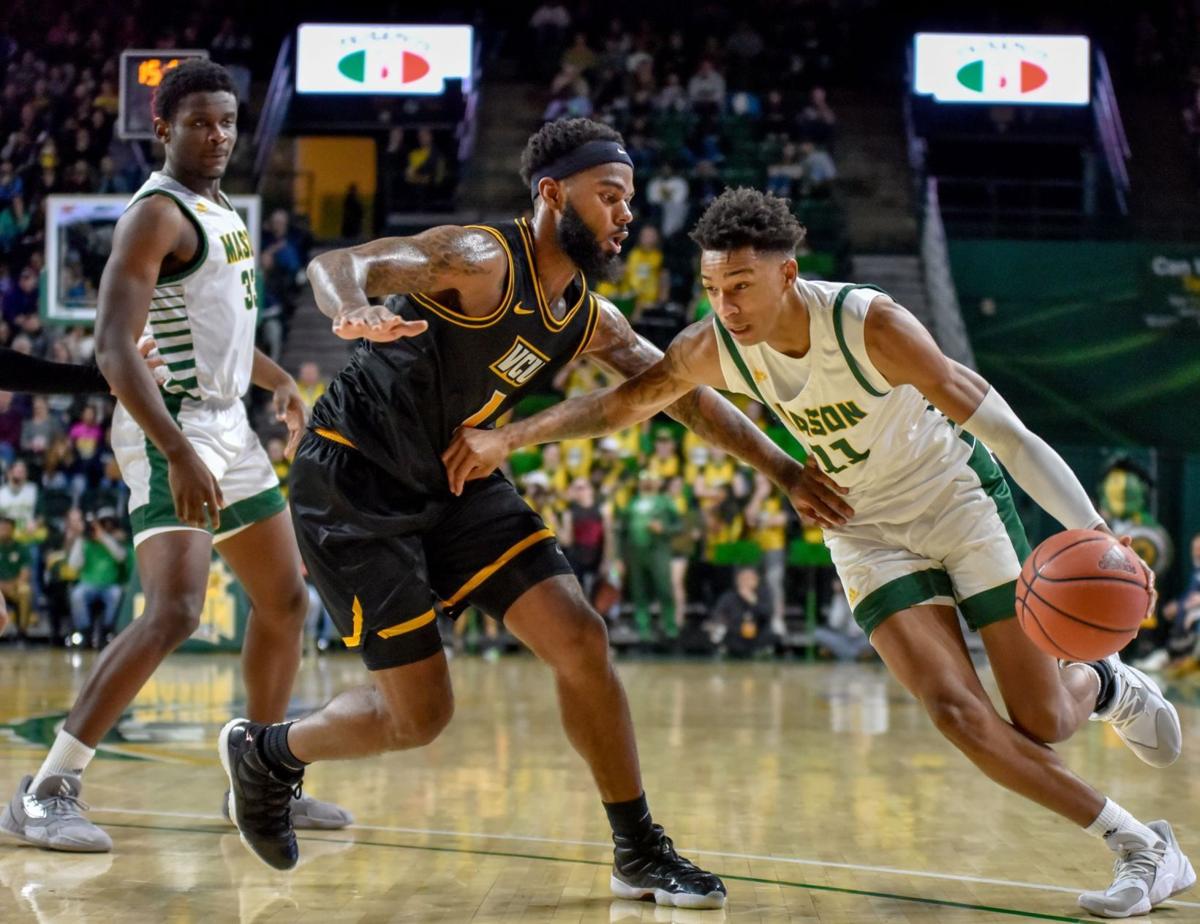 George Mason guard Jordan Miller drives to the basket during a Jan. 5 home game against VCU. Miller has been in GMU's starting lineup for every game of his sophomore season. 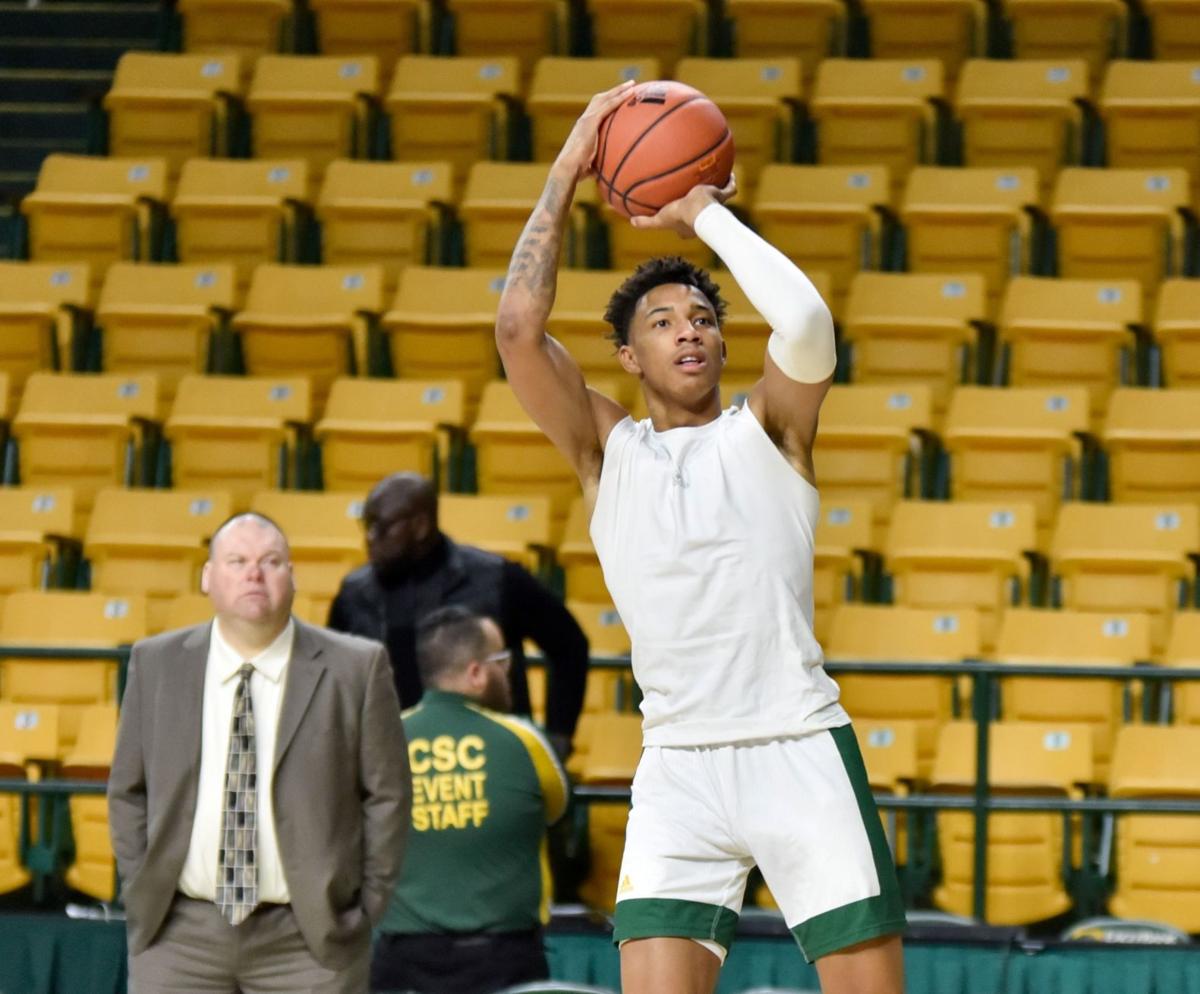 George Mason guard Jordan Miller drives to the basket during a Jan. 5 home game against VCU. Miller has been in GMU's starting lineup for every game of his sophomore season.

It’s long been a sight familiar to Loudoun basketball fans: Jordan Miller, athletic, long-armed and left-handed, flashing around the court in a green-and-gold uniform, being a constant threat on offense and a disruptor on defense.

Miller, a Middleburg resident and Loudouner since age 4, parlayed an illustrious hoops career at Loudoun Valley High School - where he became the Vikings’ all-time points leader - into a scholarship offer to play for George Mason University.

Halfway through Miller’s sophomore season, it’s been just like old times. The 6-foot-6 starting guard is averaging 12.9 points, second on the Patriots. He’s also among the team’s leaders in steals, free throw percentage and minutes played.

But don’t tell Miller the college level of the game is just like high school.

“There’s a lot more to it than in high school. There it’s more of a basic game,” he said. “In college it’s another level of thinking, more reads, more you have to do.”

As a Division I student-athlete, Miller has plenty to do. His daily regimen includes team meals, classes, homework, practice, and time in the trainer’s room before and after practice. When the team travels for a game, the schedule gets more hectic.

“It’s a constant cycle, but you gotta love the grind,” he said.

A product of Loudoun hoops

Miller was born in California but his family soon relocated, first to Leesburg and then Middleburg. The youngest of four basketball-playing brothers, Miller grew up shorter than his siblings and his peers in the Western Loudoun Basketball League, and was forced to learn backcourt skills like ballhandling and passing.

“I was one of the shortest kids and playing guard positions,” he said. “I knew that was going to help me in the future.”

In sixth grade Miller joined the AAU circuit with the Loudoun-based D1SA Spartans. In middle school Miller hit a growth spurt and could play anywhere on court.

He was a starter for head coach Chad Dawson from his freshman season onward, earning the Virginia 4A Player of the Year award as a junior while leading the Vikings to their first state championship. Overall, Valley went 83-6 during Miller’s sophomore, junior and senior seasons.

“It’s just a great family environment,” he said. “When I think of Loudoun Valley or of Purcellville, I think of family.”

“Glad I can say I was part of that history!” he tweeted.

Miller was part of Valley history as a member of that state championship team, but that title almost never happened.

In the regional championship game, Miller stood at the free throw line with 3.4 seconds left, needing one to tie and two to win.

One year prior, Miller was in a similar situation in the state quarterfinal. Needing two free throws to force overtime, he missed the first and the Vikings suffered their only loss that year.

“That was heartbreaking, but from that point on that’s when I started working my hardest,” he said.

With the region title on the line, Miller sank both free throws for the win.

“That right there was a testament to me that you can do anything if you work hard on it.”

Prior to his freshman season, he and George Mason head coach Dave Paulsen agreed that Miller would forego early playing time and redshirt. But his talent and work ethic wouldn’t let it last.

“I was doing extra workouts, putting in overtime,” said Miller, who watched the first 13 games of his college career from the bench.

Dealing with a couple key mid-season injuries to Mason’s lineup, Paulsen pulled the redshirt off Miller for a conference game at Rhode Island. His impact was immediate.

Before he’d played a minute of college ball, the Loudouner blocked a shot, made a mid-court pick-pocket steal, and raced to the other end for a two-handed slam. He put up 11 points in the first half and ended with 14 points, two blocks and two steals in an 84-67 win.

He’s been a starter ever since.

“My thought process was, I came to play. Why wouldn’t I take the opportunity to do what I love?” said Miller about having the redshirt pulled off.

He closed his freshman campaign with a 10.4 points-per-game average, good for third on the Patriots, and a team-leading 61.2% field goal percentage. After tallying 25 points in an early-season Mason victory Nov. 13, Miller’s had no sophomore slump.

Miller’s already creating lasting memories as a college basketball player. He fondly recollects the feeling of playing in front of dozens of friends and family when he made his first home start.

“Everybody from around here came out to support me,” he said. “Right there was a moment that showed why I love playing this game.”