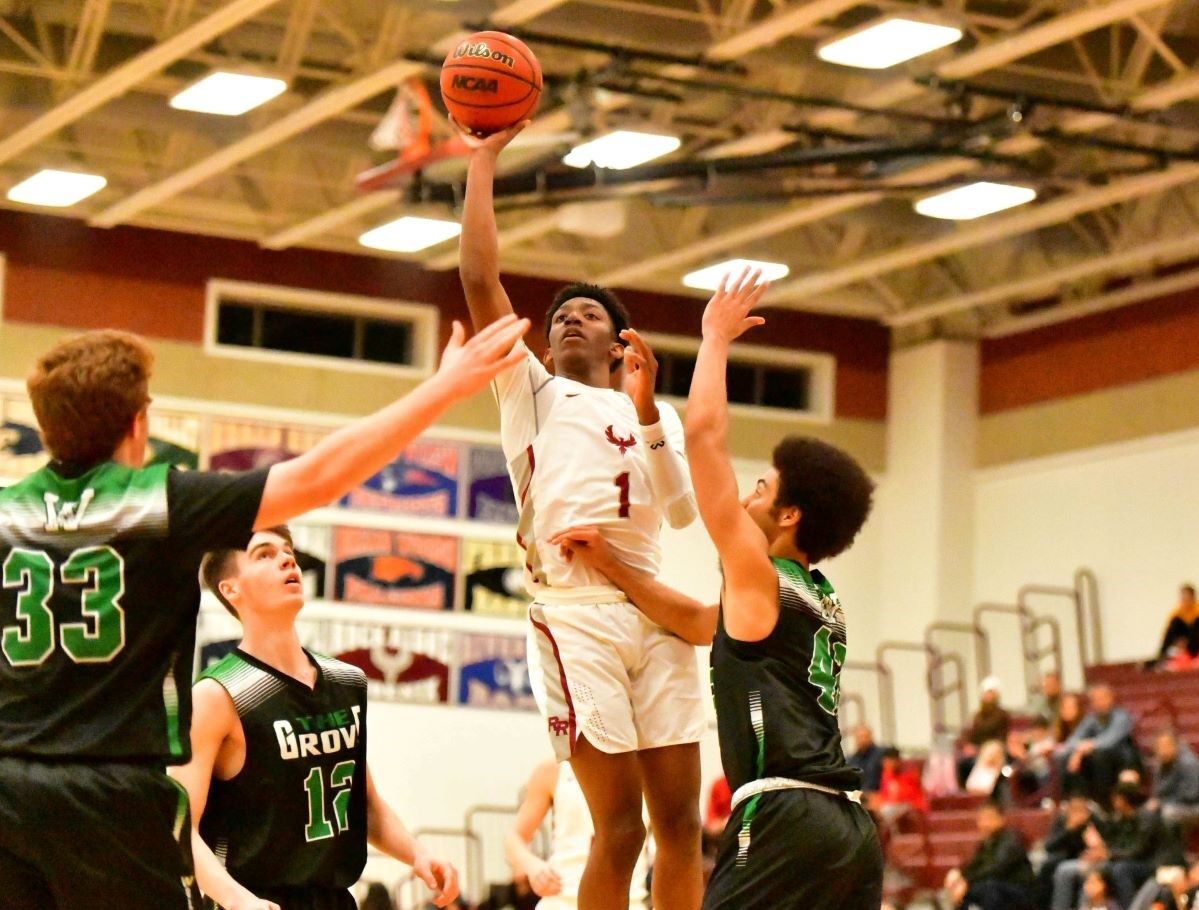 Greg Spurlock Jr. rises for a shot in a Potomac District game against Woodgrove during the 2019-2020 season. After receiving interest from multiple colleges following a stellar junior season, Spurlock has committed to continue his education and basketball career at Coppin State University. 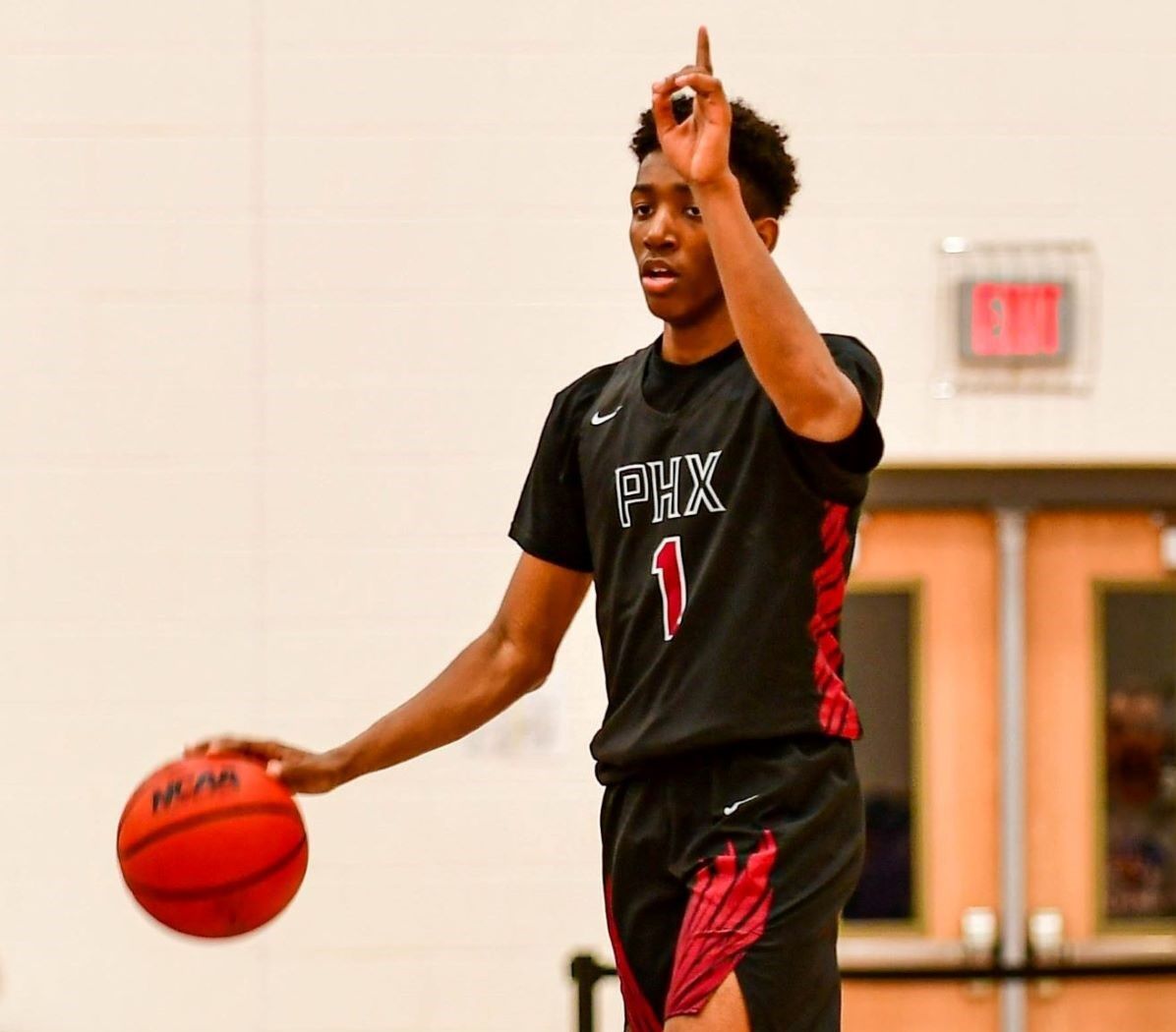 Rock Ridge point guard Greg Spurlock Jr. takes pride in his distribution skills. He set school records for assists in a game (15) and a season (140) during his junior year.

Greg Spurlock Jr. rises for a shot in a Potomac District game against Woodgrove during the 2019-2020 season. After receiving interest from multiple colleges following a stellar junior season, Spurlock has committed to continue his education and basketball career at Coppin State University.

Rock Ridge point guard Greg Spurlock Jr. takes pride in his distribution skills. He set school records for assists in a game (15) and a season (140) during his junior year.

"Coach [Jay] Geyer started pushing out my film and my accolades to different coaches from all over," said Spurlock, a 6-foot-4 point guard. "I started getting a lot of phone calls from all three levels."

"When they first called me, I didn't have any offers. I just had a lot of interest," Spurlock said. "They watched one of my games in particular against Potomac Falls, where I had 15 assists. They saw my potential and they offered me a scholarship right there on the spot."

About a week later, Spurlock and his family joined Coppin State's coaching staff on a Zoom call. "They ran us through everything, and I committed right then and there," Spurlock said.

"Greg was ecstatic about how much Coppin State believed in him," Geyer said. "I think that sold it for him."

Coppin State competes at the NCAA Division I level in the Mid-Eastern Athletic Conference. Juan Dixon, a key member of the University of Maryland's 2002 national championship team before playing professionally for nearly a decade, is entering his fourth season as head coach at Coppin State.

"He was a big reason why I committed there," Spurlock said of Dixon. "Just because of his knowledge of having played at the highest level. I feel as though he can help me reach my goal to play professionally."

Spurlock says he plans to visit the school's campus in Baltimore prior to November's official signing period. He is considering sports management and criminal justice as areas of study.

After being called up to the varsity team midway through his freshman season and missing a portion of his sophomore campaign due to a broken wrist, Spurlock was finally able to play a full varsity season last winter.

Spurlock made the most of the opportunity, setting Rock Ridge records for assists in a game (15), in addition to assists (140), two-point field goals made (131) and shooting percentage (55) in a season.

He averaged 18 points, six assists and five rebounds per game on his way to earning first-team all-conference and all-region honors, as well as second-team all-state accolades.

Spurlock says he takes the most pride in his passing ability and his defense on the basketball court, adding "I like to get my teammates involved and trust them."

"Greg has always been an unselfish player who makes the right play," Geyer said. "His vision is next level. He reads defenses so well and sees guys before they get open."

"He has a genuine connection with each guy on the team. That goes a long way when you need to get on someone a little bit. He communicates really well. He also has an incredible competitive spirit and makes sure the other guys follow him. He wants to win at every drill, every single day in practice."

Rise of the Phoenix

With the cancellation of the 2020 varsity spring sports season and the delay of the 2020-2021 athletic calendar due to COVID-19, basketball was the final varsity sport played last school year and is on track to be one of the first sports contested this school year.

That is potentially good news for the Rock Ridge Phoenix. Spurlock is one of three rising seniors -- joining Evan Fitch and Sam Larsen -- who have played together on Rock Ridge's varsity team since their freshmen years.

"We have been eying this season since this group was in the eighth grade. We kept 12 juniors on the team last year," Geyer said. "There’s a real bond with this group ... We believe we will be one of the top teams in the county this winter. We are keeping our fingers crossed that we get to get on the court this season."

A member of Rock Ridge's Varsity Club and a participant in the school's reading program with students from Rosa Lee Carter Elementary, Spurlock maintains the same enthusiasm about his senior season.

"We've all played together since middle school, so we have a real good chemistry," he said. "We know each other's strengths and weaknesses ... I'm very excited. I think we have a really good chance to go far."