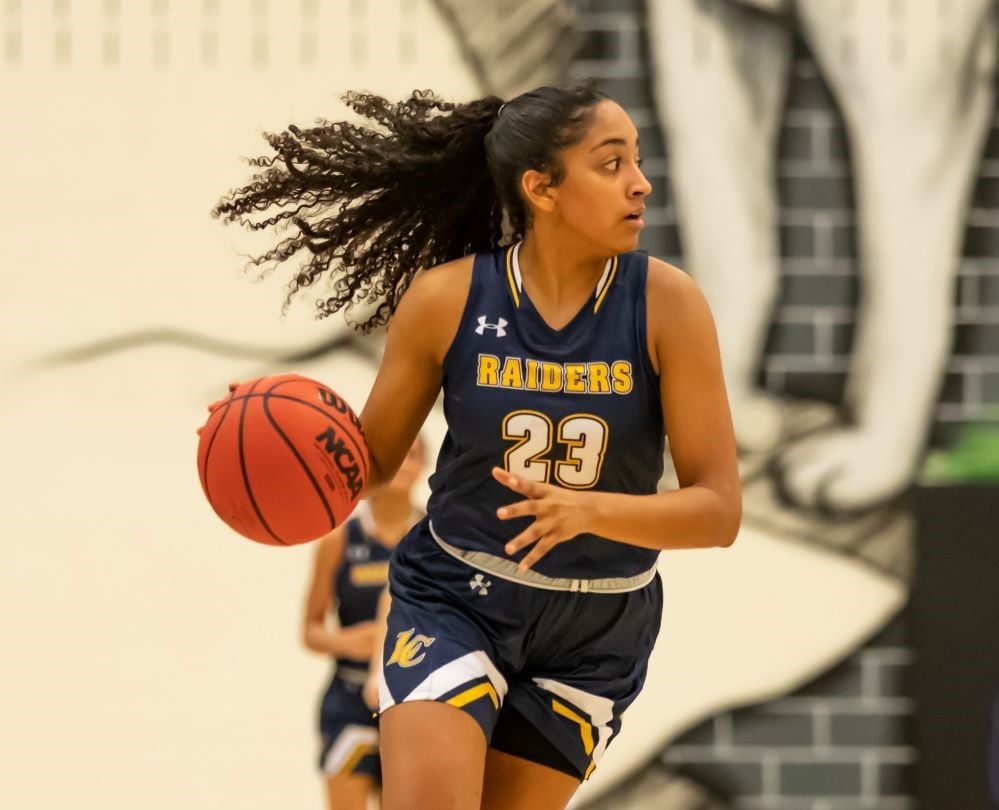 Elayna Whitley earned All-Dulles District honors for her play during her junior season at Loudoun County. Whitley has verbally committed to continue her basketball career for Delaware State University. 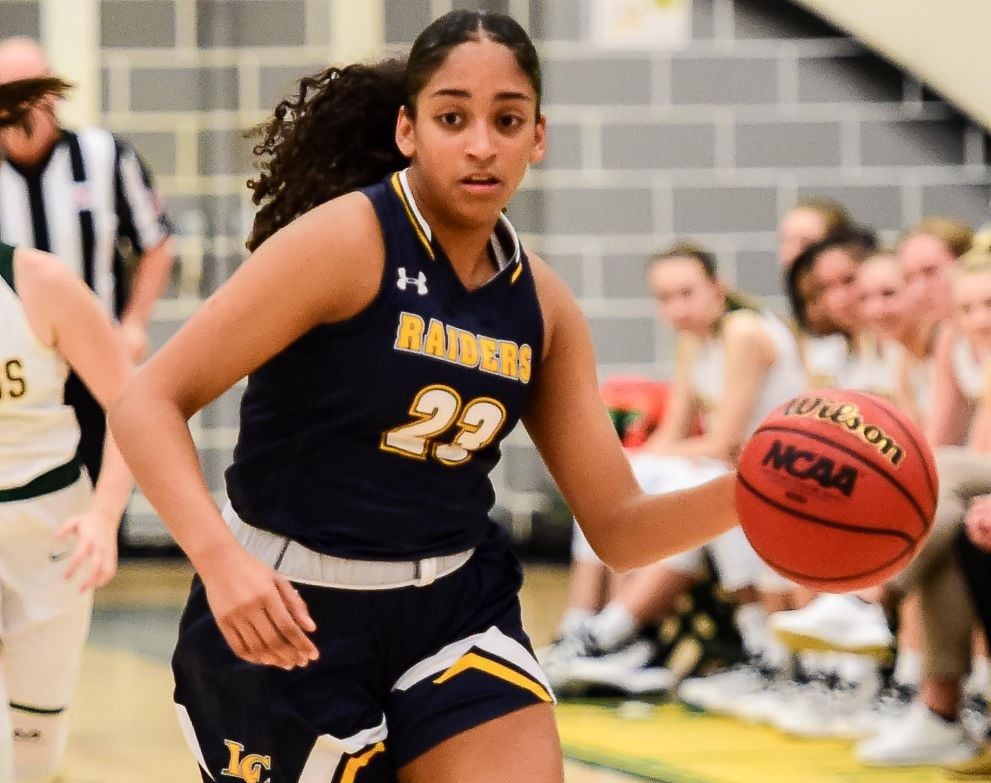 Loudoun County junior Elayna Whitley drives to the basket during a 2019-2020 varsity game.

Elayna Whitley earned All-Dulles District honors for her play during her junior season at Loudoun County. Whitley has verbally committed to continue her basketball career for Delaware State University.

Loudoun County junior Elayna Whitley drives to the basket during a 2019-2020 varsity game.

A team captain for each of the past two seasons, Elayna Whitley is a leader for Loudoun County High School's varsity girls' basketball team.

An example of Whitley's leadership qualities surfaced during the 2019-2020 season when illness struck the Raider coaching staff. Trying to fill multiple roles with his assistant coaches unavailable, first-year varsity head coach Austin Campbell guided the Raiders in a junior varsity game that preceded the varsity game.

Realizing he would not return to the locker room in time to provide pre-game preparations for the varsity team, Campbell turned over his scouting report to Whitley and requested that she draw it up on the board and review it with her teammates.

"When I looked at the white board, all of my stuff was written up and she talked to the girls. We started out on like an 8-0 run," Campbell said. "That's the kind of person she is. She takes what you give her and says, 'okay coach, I've got this.' It's been a joy to be around her."

Whitley gained a new perspective of the game when she missed most of her sophomore season due to injury.

In the first home game of the 2018-2019 season, Whitley suffered a torn meniscus in her left knee. Playing off adrenaline, Whitley was unaware she was injured until she sat down during a break in the action.

Following surgery and rehab, Whitley returned to the court for the Raiders' final two games of the season.

"It was pretty hard having to sit on the sidelines and watch," Whitley said. "I think I got to play one playoff game and one regular season game. It was hard but it was definitely a learning experience."

Despite not being able to play the game she loves, Whitley made the most during her absence on the court.

"Being on the sidelines and doing stats every game and helping our coach with a game plan, I think that definitely made me understand the game better and see it from a totally different view," she said.

On the court, Whitley leads by example. Whether it be a practice drill or setting a down screen for a teammate to get open during a game, Whitley does so with a purpose.

"She does whatever is best for the team," Campbell said of Whitley, who stands 6-foot tall and has the versatility to play or defend any position on the court. "She just has that leadership quality. She's not really the rah-rah type that talks about it. She just goes out and does it, she puts 110 percent effort into it."

Following her injury shortened sophomore season, Whitley made up for lost time during the summer AAU season. Whitley and her Fairfax Stars teammates won the 16U girls division at the 2019 Nike Nationals in Chicago.

"That was so exciting and so much fun," Whitley said.

Whitley continued her strong play in her junior season for Loudoun County. She earned second team All-Dulles District honors and was selected as the team's Most Valuable Player.

Following what she describes as a "growing year" for Loudoun County in 2019-2020, Whitley is anxious to see what the Raiders can accomplish next season. Individually, she aspires to earn selection on the All-Dulles District first team in her senior season.

"As a team, I just want us to put in the work so we can be the best we can be," she said. "A lot of times we've been the underdog. I think once we start to have fun and know that we can do this, we are going to have a good season."

Whitley recently realized a dream that started when she was playing in the Central Loudoun Basketball League as a third grader.

To the delight of her biggest supporters -- grandparents Maria and Enrique Gonzalez -- Whitley verbally committed in May to accept a scholarship offer to play NCAA Division I basketball.

"Basketball has always been a part of my life. When I'm on the court, I can forget about everything else," Whitley said. "In a way, it's my time to enjoy working hard for something."

"It's definitely been a goal since I started playing basketball," she continued. "Being able to play at the Division I level and getting a full ride is the best part."

Whitley received scholarship offers from Division I programs Delaware State University and Gardner-Webb University, along with Division II University of the District of Columbia.

She ultimately decided to continue her education and basketball career at Delaware State, a member of the Mid-Eastern Athletic Conference.

"Their coaches have always been so interested in me," Whitley said. "I talk to their coaches at least every other day. They really give a family feel."

Whitley is part of a big class of rising high school seniors set to play for Delaware State in 2021.

"There's going to be eight incoming freshmen in my class, and we all get along so well," Whitley said. "It's super nice to get to know them."

A student athletic trainer at Loudoun County, Whitley is considering a kinesiology major at Delaware State with an eye on earning a master's degree in athletic training or physical therapy.

"I'm definitely really excited," Whitley said about attending and playing basketball at Delaware State. "I think it's going to be a lot of fun."